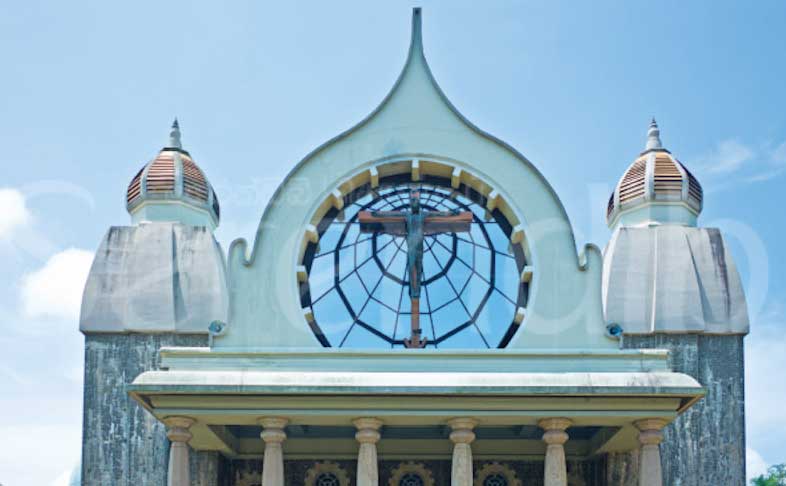 Tewatta Church, Basilica of Our Lady of Lanka 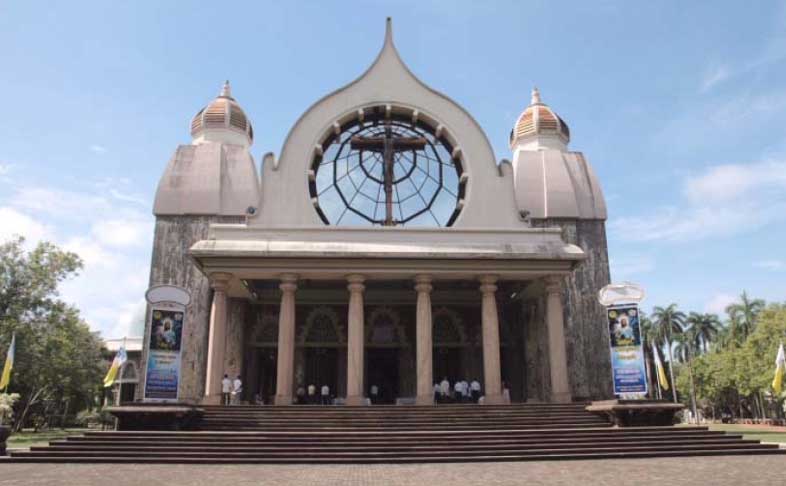 While tripping Sri Lanka, Tewatta Church, Basilica of Our Lady of Lanka must be included in the list of your ‘must-visit’ places as it is one of the renowned pilgrimage sites of Sri Lankan Roman Catholic archdiocese. With the affiliation of Roman Catholic the church was constructed in 1974 and later the status of minor basilica was given to it. Elegant styles of architecture had been implemented to beautify both the interior and exterior of the church. Six pillars which depict the six dioceses – Colombo, Galle, Jafina, Kandy, Chilow and Tinkomalle were built to support the dome shape of this basilica. Regular mass prayers are performed here on Saturday and Sunday mornings.

As you near the vehicle entrance to the National Basilica of Our Lady of Lanka at Tewatte you pass the breathtaking approach to the holy building for those on foot. This approach consists of a series of extensively wide flights of steps descending then ascending into the distance, encroached upon by large swathes of woodland. At the farthest end of the steps the Basilica stands, partly obscured by foliage. Yet it can be sufficiently observed to realise that its curious architectural elements are unfamiliar in Roman Catholicism.

Having descended the shallow steps and begun to appreciate the sylvan surroundings, you ascend and reach two statues flanking the steps; the former Archbishop of Colombo, Jean-Marie Masson, and his successor, Archbishop (later Cardinal) Thomas Cooray, both responsible for the existence of the Basilica. It all began when a shrine (a chapel) to Our Lady of Lourdes (the apparition of Mary Immaculate at Lourdes, France) was erected in 1911 and a grotto formed in 1917.

Then, in the 1930’s, the chapel was enlarged to a church because Tewatte, as it was known, became a popular place of pilgrimage for the Catholics of the Colombo Archdiocese, although it shortly became multi-denominational, with Buddhists and Hindus from all parts of the island making devotion to Our Lady of Lanka.

History of the Basilica of Our Lady of Lanka 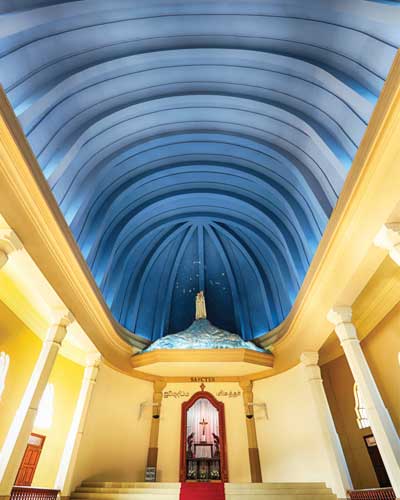 World War II broke out in 1939, and there seemed to be no way to avoid destruction in the path of the Japanese military forces. On May 26, 1940, Msgr. Jean Marie Masson, Archbishop of Colombo, made a vow to the Blessed Virgin Mary that if the area were spared the horrors of war he would build a church here in her honor.

The harbor at Colombo was bombed by Japanese planes on Eastern Sunday, 1942, sinking several ships and cause widespread panic among the population; however, the country itself remained virtually unscathed by the war. After the war the cornerstone was laid in 1950, but the Basilica itself was not completed until 1974, one year after Pope Paul VI gave it the status of Minor Basilica.

Another new Lourdes grotto, carved from rock, is now featured at the Basilica. After the outbreak of the Second World War, Archbishop Masson made a vow that if then Ceylon was protected from major conflict, he would build a Votive Basilica under the title Our Lady of Lanka. As it happened, Ceylon was indeed spared the worst. In 1946, a delighted Archbishop Masson obtained approval from Pope Pius XII for the construction of a basilica in honour of Our Lady of Lanka. 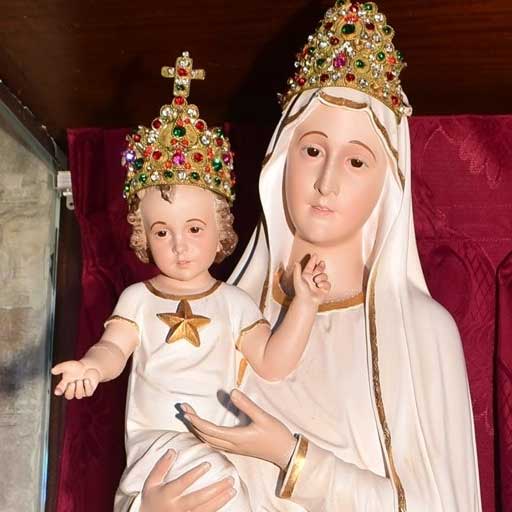 The term basilica was originally used to describe a Roman public building, usually a court of justice. After the Roman Empire became officially Christian, the term referred specifically to a large or important church given special ceremonial rites by the Pope. By the end of 2008 there were 1,584 basilicas worldwide (four classified as “major”, the remainder as “minor”).

Unfortunately, Archbishop Masson died the following year, and his successor, Archbishop Thomas Cooray, took on the responsibility of ensuring his predecessor’s vision was realised. This was advanced when, in 1948, Pope Pius XII established Mary Immaculate, to be known as Our Lady of Lanka, as the principal patroness of the island. The next vital step was the acquisition of an adjacent rubber estate on which to build the Basilica and provide ample surrounding land to plant important Sri Lankan tree species such as the Na – the national tree – Kohomba and Kabook to provide shade for pilgrims and an atmosphere of serenity and sanctity.

The laying of the cornerstone took place on February 4, 1950, but the structure was not completed until 1974, a year after Pope Paul VI endowed Tewatte with the title of Minor Basilica. On February 6, 1974, the consecration of the Basilica and crowning of the statue of Our Lady of Lanka took place. Since then what is termed the National Basilica of Our Lady of Lanka has become an increasing magnet for pilgrims, especially for the Feast of Our Lady of Lanka in February, Children’s Day in March, and the Feast and Blessing of the Sick in August. Indeed the volume of devotees who wished to stay for several days necessitated a camping area to be established, and later bungalows were built. 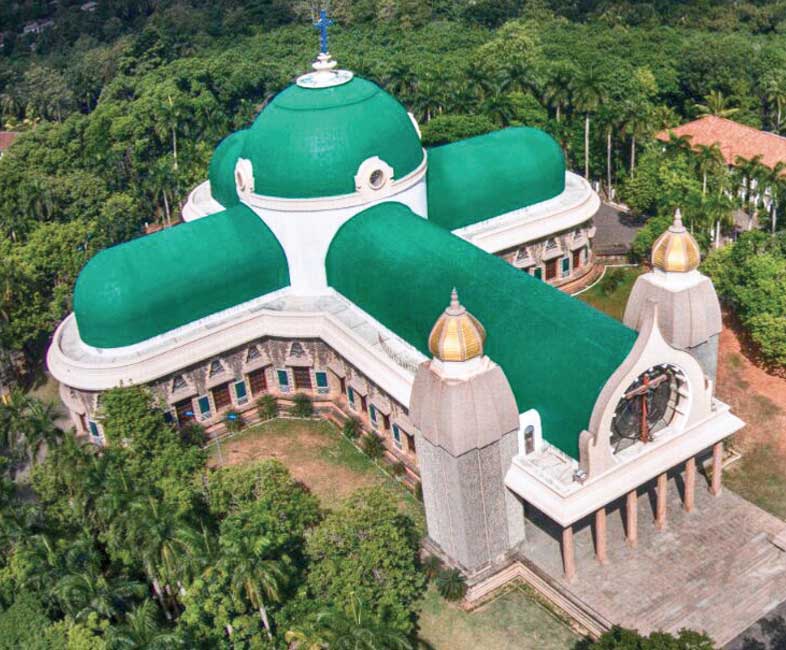 As you climb the last steps the eclectic nature of the architecture becomes visible: it takes its inspiration from Asian culture and religious buildings, a marvellous multi-denominational symbol designed by Fr. Heras and appreciated by Buddhist and Hindu devotees. The front view consists of six pillars that represent the country’s dioceses during the Second World War. Above, set against circular glass pieced in an intriguing spider’s web design, is a cross bearing the figure of Christ in bronze sculpted by the Sri Lankan artist, Leila Peiris.

The circular glass and the cross are themselves set in an early stupa design reminiscent of the entrance to certain Buddhist caves at Ajanta, India. On either side, twin towers rise, tapering towards the top where golden cupola-like bell enclosures are mounted, not unlike certain Hindu gopuram designs. Before you venture inside, it’s wise to tour the exterior of the Basilica to understand the context of the interior.

The first aspect noticed is that it is cruciform in shape with a central dome, atop which is an imposing cross of the Eastern Oriental Church featuring three horizontal bars, and adjoining semicircular roofs of the Basilica’s extensions – surprisingly made of aluminum, and painted a tranquil blue. The granite walls of the Basilica are punctuated by large wooden doorways with ornate Indian architraves above. In between are 45 artistic faux bronze reliefs by Dr. Sarath Chandrajeewa depicting the history of Christianity in Sri Lanka, which, besides being educational, enrich the appearance of the Basilica. It’s worth seeing them in sequence.

When you enter the Basilica your gaze will be drawn upwards to the sky-blue, cloud-flecked apse,the backdrop for a life-size statue of Our Lady of Lanka. Archbishop Cooray decided that the ideal representation was the statue of Our Lady of Fatima from Portugal, which toured the island in 1950. However, Our Lady of Lanka would have the infant Jesus in her arms and they would be pointing to each other, meaning “to Jesus through Mary”. Furthermore, in Jesus’ outstretched other hand there would be a rosary, later a golden one gifted by Pope Paul VI. 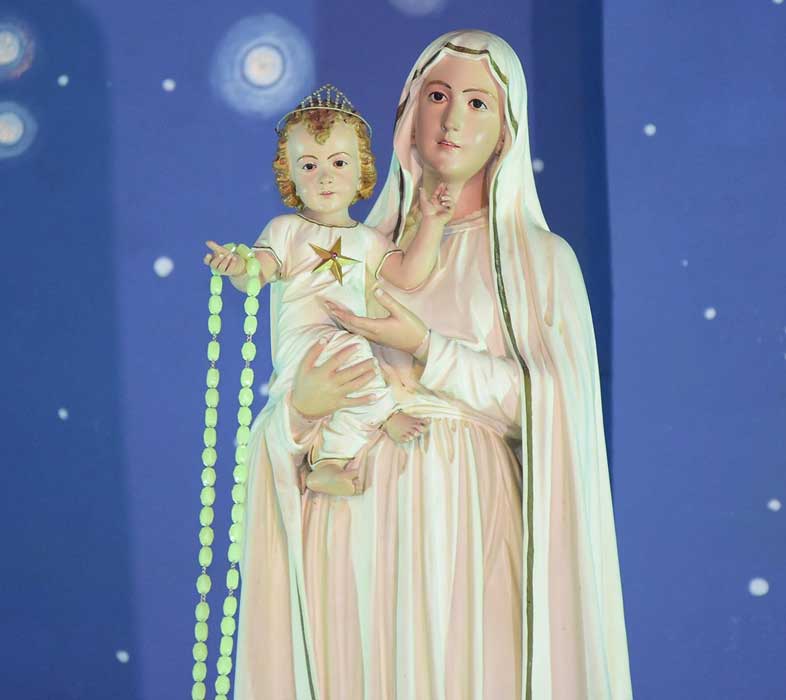 Two statues of Our Lady of Lanka based on such a design, one life-sized for the apse, the other smaller, were carved by Thedim of Fatima, who had also carved Our Lady of Fatima. The smaller statue, which was taken to Rome to be blessed by Pope Pius XII, is enshrined on a pedestal and worshipped by all.

The altar consists of an imposing block of undressed white stone. Magnificent is the crucifix designed by Rev. Fr. Priyantha Silva on the occasion of the visit of Pope John II in 1995. Note the altar railings. Cardinal Cooray wanted to include many species of the country’s trees, thus the railings present astonishing variations of brown and black – teak, mahogany, iron-wood, jak, white and red sandalwood and many others.

The Holy of Holies contains a tabernacle that is a perfect replica of the Ark of the Covenant, with measurements taken from the Bible. The design of the two angels on either side is also based on biblical description. Above hangs an ivory cross. Don’t forget to descend into the beautifully refurbished Blessed Sacrament Chapel, situated in the crypt where Cardinal Cooray is buried.

When you have absorbed what the Basilica has to offer, a visit to the nearby grotto is essential. It’s not unlike the one at Lourdes, indeed it was meant to be a replica, created during the Tewatta Church, Basilica of Our Lady of Lanka construction as the granite rock was quarried to make into building blocks, and completed in 1959. Once the grotto was completed, the ceremonies of the Blessing of the Sick and Children’s Day began to be held there.

Finally, Tewatta Church, Basilica of Our Lady of Lanka recommended is a visit to the Museum, which is Kandyan in design, complete with moonstone, which contains immensely valuable collections, from traditional carved figures to Cardinal Cooray’s vestiments. The signs that remind visitors “This is a Holy Place” are hardly necessary. 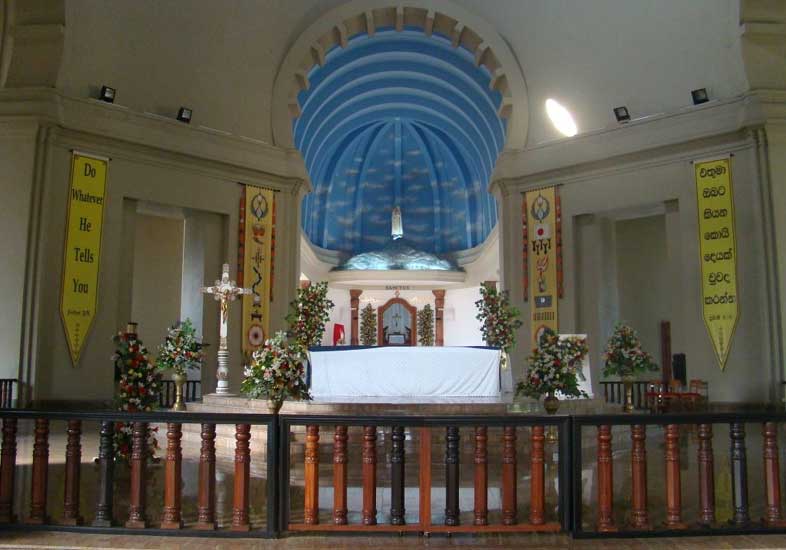