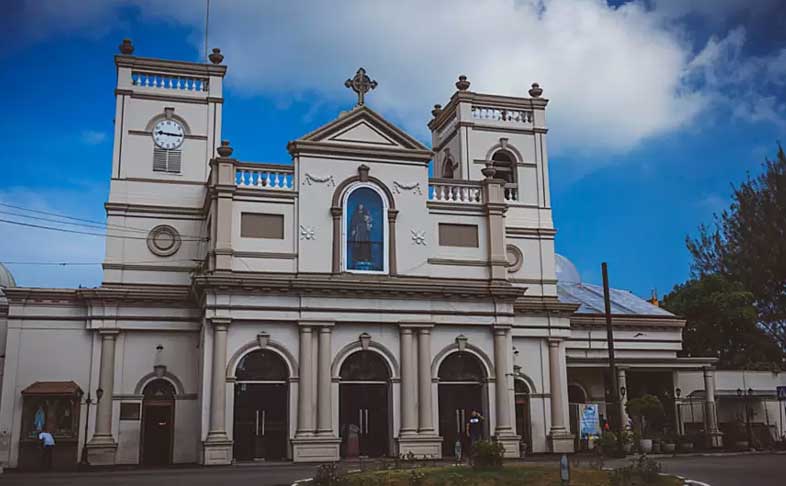 From the outside, it is by every appearance a regular Catholic Church. But the second you step in, it’s as if you’ve stepped into a pagan temple. There are a dozen statues of Christian saints, and you will find lines of church-goers making offerings to each saint in a manner that is definitely non-traditional. The statue of St. Anthony is especially popular, as there are stories of miracles associated to it. During times of festival, the entire church is usually decked out in full Hindu-style pagan pizzazz. This all inclusive nature of the church has made a favourite of people of every imaginable faith in Colombo. The church was built in 1905 by an Indian Catholic. The church is an important cultural asset in Indo-Sri Lankan relationships.

Saint Anthony’s Shrine, Kochchikade built in 1828, is dedicated to St. Anthony of Padua and is a modern Roman Catholic Church in the Kochchikade, Kotahena of Colombo. The shrine has an impressive Renaissance architecture and is a place of miracles and faith for both Catholics and non-Catholics. It attracts worshipers at all times of the day, especially on Sundays and is thus one of the most sought after attractions of Colombo. The 1st floor has a small museum dedicated to the memory of the patron saint, St. Anthony. The locals have a great belief that a lot of healing takes place at this Church. Amidst the crowd, the Church still exhibits a serene and godly atmosphere. There is also a shop where you can pick up some relics. 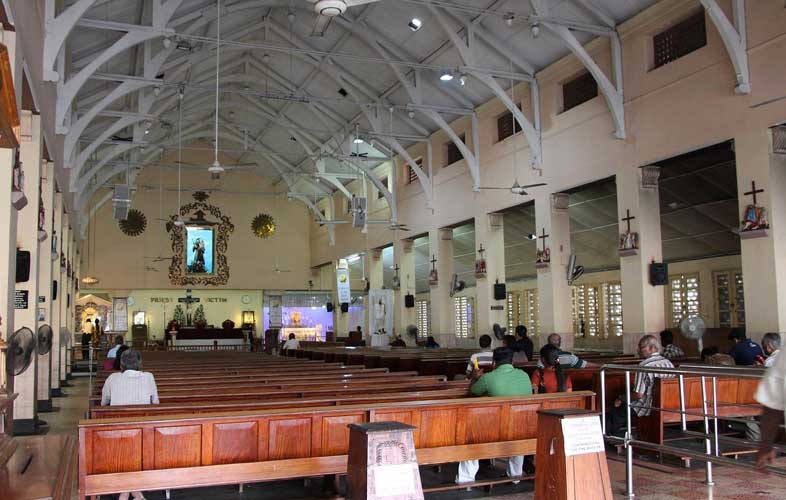 All of us believe in our Lord Jesus Christ and know how our prayers to Him have been answered through St. Anthony the Saint of Miracles.

The history of Saint Anthony’s Shrine, Kochchikade as handed down by tradition and gleaned from the documents preserved in the Archdiocesan Archives in Colombo is as follows- In the 18th Century, Catholicism was still a proscribed religion in Sri Lanka and priests could not exercise their ministry in public. The Dutch were persecuting the Catholics but who preferred to be degraded, impoverished and ridiculed rather than give up their Faith; Shrines such as Madhu, Talawila and Kochchikade are souvenirs of those dark days of the persecution.

A few Orations from Goa, visited the faithful in Ceylon at the risk at their lives. Fr. Jacome Gonsalves the Superior of Orations who is affectionately remembered in Ceylon as the ‘father of Sinhala Catholic Literature, lamented the fact the Catholics of Colombo had no resident priest. However a zealous priest, Fr. Antonio, disguised as a merchant took up his abode in a house in Maliban Street, Colombo, close to St. Philip Neris Church. (The old Church faced the road) The Dutch discovered his hiding place, but Fr. Antonio, disguised, fled towards Mutwal.

He met some fishermen who knew him and his reputation for Sanctity, and volunteered to protect him from the Dutch, provided he obtained from God the favor they wanted, namely the stoppage of Sea erosion. When the pursuers arrived, the fishermen refused to hand over Fr. Antonio until he had granted them the favor they were asking for. Fr. Antonio then returned to his home at Maliban Street, and came to the shoe, clad in his priestly garments and with a large wooden Cross in his hand. Planting the Cross at the spot most threatened by the advancing Sea, he prayed to God to manifest His Glory, by working this miracle. On the third day the waves receded and an extensive sand bank was exposed to the view of all.

The Dutch Government appreciated this favor and offered a reward to the people’s benefactor. The humble priest asked only the permission to live and die near the Cross he had planted. This was granted and the priest built a Chapel with mud in honor of his patron, St. Anthony of Padua. When he died after many years, he was buried there.

The little Chapel which was made of mud was enlarged in 1806. And in 1822 one of the members of the Congregation went to Goa and brought a Statue of St. Anthony and it was solemnly placed on the altar of the small Church. This is the very image that is to day held great veneration at St. Anthony’s Church, Kochchikade, and the side altar on which it rests, is the altar of the ancient Church and stands on the very spot Sanctified by miraculous event to which the origin of the same Sanctuary is due.

Located in Kochchikade, Kotahena within the Archdiocese of Colombo, St. Anthony’s church is known as a miraculous shrine among devotees. The church has an interesting history which dates back to the early Dutch Colonial Period, during the 18th-century when Catholicism was banned in Portugese held Sri Lanka, when Catholic priests had to carry out their sermons from hiding places. In 1806 the church was refurbished and expanded, the St. Anthony’s status which resides on one of the altars was brought down from Goa, India in 1822 by one of the members of the Congregation.

Soon after the arrival of the statue of St. Anthony the work of building of a large Church commenced and the Church was completed in 1828. The blessing of the new Church took place on Sunday the 1st June 1834, presided over by the Vicar General Very Rev. Fr. Caetano Antonio. It would appear that people of all creeds, government and military authorities too included, lent their support towards the erection of this Church which continues to be a centre of deep devotion to the Wonder-Worker. With the devotees of the Saint increasing, this Church too became congested.

In 1938 plans were made to improve and enlarge the structure. A Chorister’s gallery, large wings on either side, the Mission house and meeting room behind the main altar were added. On the 16th February 1940 the Most Rev. Dr. J.M. Masson O.M.I. the Archbishop of Colombo, blessed the new Church. In his Lenten pastoral of that year he wrote ‘The Venerable building hallowed by over a century of Catholic piety could no longer serve the growing needs of the present day. It called for replacement; a new and more spacious structure has now taken its place.

It is indeed a monument of love and devotion to St. Anthony raised by all, rich and poor, but mostly the latter, in Colombo, as well as in the whole of Ceylon. May St. Anthony protect this City and this Island and all his devout clients and lovers therein. The present marble altar in the centre of the Church was consecrated by the then Archbishop of Colombo, his Eminence Thomas Cardinal Cooray O.M.I. in 1951.

In keeping with the new Liturgy, the main altar has now been re-adjusted to enable Holy Mass to be said facing the people and Blessed Sacrament is now reserved on a special altar on the left wing. The Church now has a new appearance with its terrazzo flooring.

The miraculous statue of St Anthony at side altar has now been installed in a bullet proof glass case to ensure its protection and safety. And iron safe has been installed beneath the statue. Postal stamps worth five rupees were issued by the Sri Lankan government to commemorate the 175th anniversary of the church on 13 June 2010. 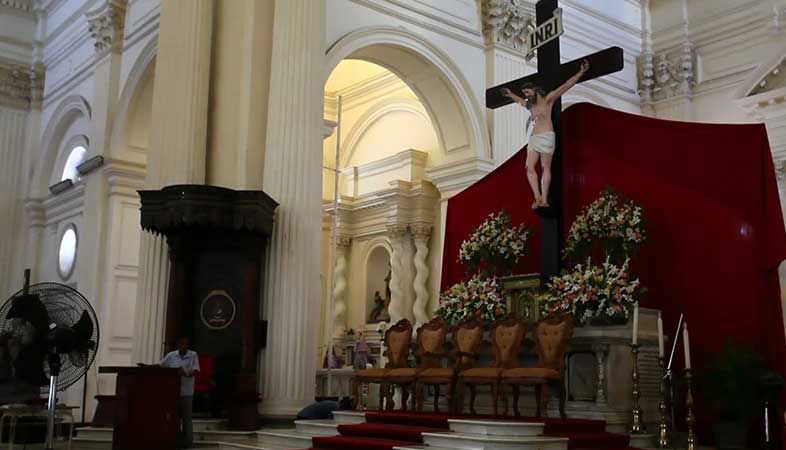 At the entrance of the church there is a statue of St. Anthony along with a tiny preserved piece of the saint’s tongue. Devotees light up yellow candles and touch the glass panes seeking help, forgiveness from the saint. A tiny piece of the incorrupt tongue of St. Anthony of Padua is enshrined is a special reliquary and placed in one of the glass cases with a statue of the saint, at the entrance to the Church.

The church’s origins relate to the early Dutch colonial period when Catholicism was banned from the island, with Catholic priests carrying out sermons from hiding places. Fr. Antonio disguised himself as a local merchant, finding refuge with a local fishing community at Mutwal. According to local legends the community sought his help to stop the sea eroding their village, and Fr. Antonio planted a cross and prayed at the beach, resulting in the sea receding and the community converting to Catholicism.

The Dutch authorities then allocated him some land to carry out his sermons, whereupon he built a mud brick chapel dedicated to St. Anthony of Padua (Sant’Antonio da Padova). Fr. Antonio is buried within the church. St. Anthony’s Shrine, Kochchikade, Colombo, is 185 years old and dates back to the Dutch colonial era when the Catholic religion was banned on the island.

During this time the raging sea was eroding the village so the Catholic priests and Fr. Antonio who came to Ceylon from Cochin, placed a cross at the beach and prayed, the sea receded. Seeing this, the Dutch rulers allowed choosing catholic religion and allocated a land where a chapel dedicated to St. Anthony of Padua was built in 1806. In 1822 the historical statue of St. Anthony was brought from Goa and positioned in the altar. The construction of the Chapel was finally completed in 1828. 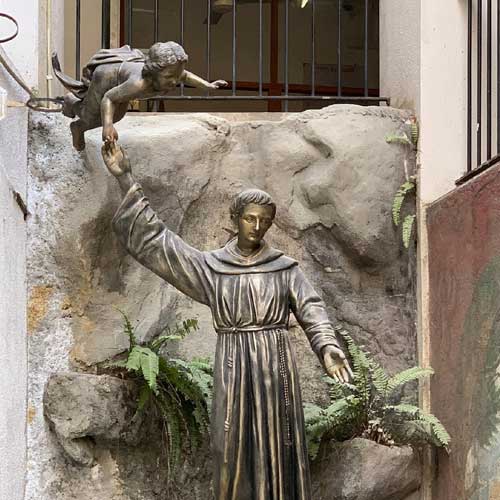 Devotees from across the country, Catholics as well as those from other faith, attend the annual feast of St Anthony’s Shrine or the Kochchikade Church. Festivities commence with the flag hoisting ceremony on June 3. Thereafter, novenas and special prayers will be held until the vespers service on June 12. On June 13, the feast day, mass is held every hour from 4 am to 7 am. The main services will be held at 8am (Tamil), 10am (Sinhala) noon (English). The procession of the statue of Saint Anthony will be at 5.30pm while the final blessing takes place at night.

Take a tuk-tuk, Taxi, or local Bus to Kotahena Bus Stand to reach the Shrine.