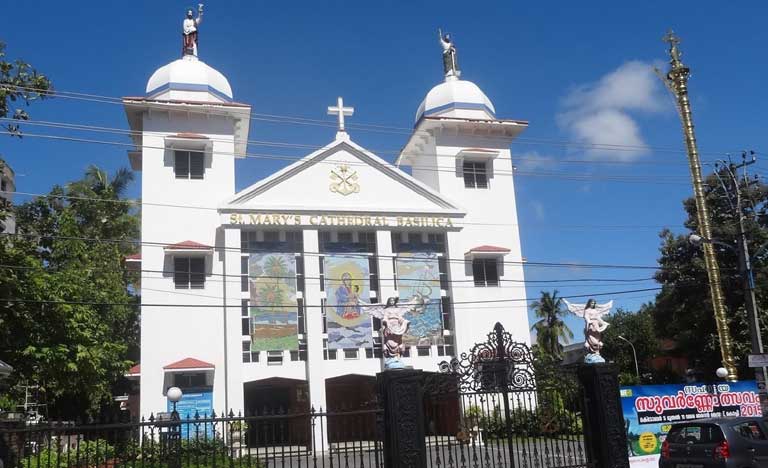 Saint Mary’s Syro Malabar Cathedral Basilica, Ernakulam, Kerala, India was founded in 1112, and is also known by the names Nasrani Palli, Anchikaimal Palli or Thekke Palli. The church is the headquarters of the Major Archeparchy of Ernakulam-Angamaly, which is the Primatal See of the Syro-Malabar Church.

The present church was built in the early twentieth century under the direction of Mar Aloysius Pazheparambil and was elevated to the status of a Basilica by Pope Paul VI on 20 March 1974.

The large, tall and spacious Saint Mary’s Syro Malabar Cathedral Basilica, Ernakulam has an altar that was used by John Paul II, when he visited India during 7 February 1986. The altar depicts the Birth, the Crucifixion and the Resurrection of our Lord Jesus Christ. The two 68 feet tall towers in the front have statues of St Peter and St Paul on top and the bell tower (88 feet high) has St. Thomas statue on top. There is also a beautiful depiction of Jesus Apparition to St Thomas.

The Archeparchy of Ernakulam-Angamaly (formerly known as Archdiocese of Ernakulam) occupies a prominent position in the history of the Syro-Malabar Church.  It was established as a Vicariate by the Bull “Quae Rei Sacrae” of Pope Leo XIII on 28th July 1896. Mar Aloysius Pazheparambil was appointed as the first Vicar Apostolic, who assumed charge on 5th  November 1896.

Under the able guidance of Mar Pazheparambil, the Vicariate began to flourish.  City of Ernakulam was chosen to be the location for the Bishop’s House and the construction was begun in October 1897 and it was completed and blessed on 24th April 1900.   Although he had to begin from the scratches, his indefatigable labours, coupled with the hearty co-operation of the clergy and laity brought the Vicariate within a few years, to a position of eminence.  He continued to govern the Vicariate ably and successfully till his death on 9th December 1919.

As the Syro-Malabar Hierarchy was established on 21st December  1923, by the Bull “Romani Pontifices” of Pope Pius XI, Ernakulam was raised to the status of an archdiocese and was made the centre of the Syro-Malabar Church.  Its Vicar Apostolic Mar Augustine Kandathil was appointed as the first archbishop.

On 20th July 1956, Mar Joseph Parecattil became the Archbishop of Ernakulam.  By the Bull, “Qui in Beati Petri Cathedrae” of Pope Pius XII, Ernakulam was bifurcated and the diocese of Kothamangalam was erected on 29th July 1956. The Dioceses of Thrissur, Thalassery and Kothamangalam became suffragan Dioceses of Ernakulam Archdiocese. Mar Joseph Parecattil was made Cardinal on 28th March 1969 and Mar Sebastian Mankuzhikary was appointed as his auxiliary on 15th November 1969.

The present church was built in the early twentieth century under the direction of Mar Aloysius Pazheparambil and was elevated to the status of a Basilica by Pope Paul VI on 20 March 1974.

The Auxiliary Bishop Jacob Manathodath was appointed Bishop of the Diocese of Palakkad and took charge there on 1st February 1997. Msgr. Thomas Chakiath was nominated Auxiliary Bishop to the Apostolic Administrator Archbishop Varkey Vithayathil on 17th February 1998.  Bishop Chakiath who is also the Vicar General assists the Archbishop in the Administration of the Archdiocese.