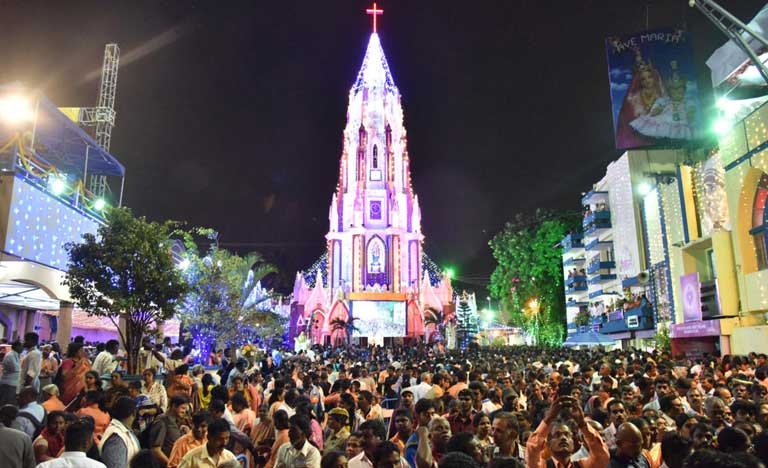 Saint Mary’s Basilica, Bangalore is the oldest church in Bangalore built in 1882 and is the only church in the state that has been elevated to the status of a minor basilica. It is famous for the festivities it holds during the St. Mary’s Feast, in September each year, an event which attracts a large number of devotees from in and around Bangalore. It is a marvellous sight to behold with its towering façade, glass windows and the loving statues of Mother Mary. It is a generous throwback to the colonial era of Indian history and restores the traditional faith of Christianity till date with elaborate feasts, masses done in different languages and the annual celebration of Mother Mary’s nativity day.

Saint Mary’s Basilica, Bangalore is a spacious gothic-style Church built in the form of a cross, designed by a French architect. It is 172 feet long and 50 feet broad. The imposing and magnificent tower forming the facade of the Church is 160 feet in height. A beautiful statue of Mother Mary holding Child Jesus in her arms, 6 feet in height, is set up in an attractive shrine just outside the Church building. Every day, Our Mother Mary is draped in a saree, which is the typical dress of an Indian lady.

It is said that when the new Church was built, people tried to remove this statue to install it on a prominent altar inside the Church, but they failed in their effort since the statue remained immovable. This strange happening is considered to date a sign of Our Lady’s miraculous power. The Main Feast of the Church is celebrated with all grandeur on the 8th of September, the Feast day of the Nativity of Blessed Virgin Mary, every year. This feast is considered one of utmost importance by the people, in the whole of the Archdiocese and the state of Karnataka.

St. Mary’s Church to the title of “ANNAI AROKIAMMARIE BASILICA’ on 26th September 1973, which was officially announced and celebrated on 26th January 1974. Since then, every year this day stands as a remarkable significance of God’s grace. For several years a grand car procession carrying the Eucharist was organized and the archbishops administered solemn blessed of the Blessing Sacrament.

Due to increase in the population, and more devotees flooding to visit the shrine of Our Lady, the space that was available for the devotees to stand and pray was found to be very congested. At this juncture, the then Parish Priest, Rev. Fr. T. Jabamalai, successor of Rev. Fr. Paul Kinatukara, constructed a hall like structure facing east and placed the statue of Our Lady in a prominent place. This enabled thousands of devotees to see her without any hindrance and pray to her more devotedly.

During the year 2004 – 2007, the church was completely renovated by him and was rededicated on 29th August 2006 by the Archbishop of Bangalore, and that year (1882-2007) it celebrated 125th year of its consecration. During the month of June 2007, the Church and Shrine was bifurcated His Grace the Archbishop of Bangalore appointed Rev. Fr. A.S. Anthony Swamy as the Parish Priest and Rev. Fr. L. Arulappa as the Rector of the Shrine. On 8th of September 2007, Annual feast day and birthday of Blessed Virgin Mary, His Grace the Archbishop officially declared this Basilica as the Diocesan Shrine.

The church has had a very developmental history through the passage of time. It was set up by Fr. Jean Dubois, a Catholic priest, in the year 1811 as a small chapel in the town then known as “Bili Akki Palli”. The chapel was then known as the ‘Chapel of Kanikkai Madha’ or ‘Kaanike Mathe Devalaya’. The church was then enlarged in the year 1813 but had to be built again from the year 1856-1882 as it was destroyed in the communal riots during the 1830s. The new structure of St. Mary’s Basilica was then planned by Bishop Jean-Yves-Marie Coadou in the years to follow, to be finally given the title of “Minor Basilica” in the year 1973.

The architecture of Saint Mary’s Basilica, Bangalore is inspired by the Gothic Style, as the church stand 160 feet tall with its stained glass windows, ornamental motifs and beautiful arches adorning the walls. There is a bigger statue of Mother Mary with baby Jesus just at the porch of the church, who is draped with the traditional Indian women’s attire of sari every day. This statue earned the name of being immovable as the builders could not shift it during the construction of the new church.

Miraculous Statue of Our Lady

At the main entrance of the Shrine you will find another Statue of Our Lady, a smaller one, which has a story behind it. It is believed to have happened in the year 1832, when the Church was attacked by some miscreants and everything was destroyed except this small statue. It is also said that when they attempted to pull it down, they were struck blind.

Soon police and military contingents arrived on the scene and restored clam just when the mob had set fire to the Church. The statue thus miraculously saved, is the one that is placed in an imposing, flower decked, illuminated palanquin taken in procession during the important days of Marian devotion. It is true that for several years even Muslims were in the habit of taking out in solemn procession, the same statue of Our Lady.

Apart from the beautiful infrastructure of the church, the St. Mary’s feast, which happens for 10 days in September every year, is also something which draws a large number of tourists to the Basilica. The birth of Lady Mary is celebrated with a grand feast, which involves feeding the poor and the needy, performing social services for the underprivileged and also, hosting of the Traditional Flag.

For the first 9 days, Novena is held, and on the 10th, that is the 8th of September – the birthday of Mother Mary, a holy feast – the Nativity of Blessed Virgin Mary is arranged and the image of Mother Mary is carried around the local streets in a beautifully adorned chariot.