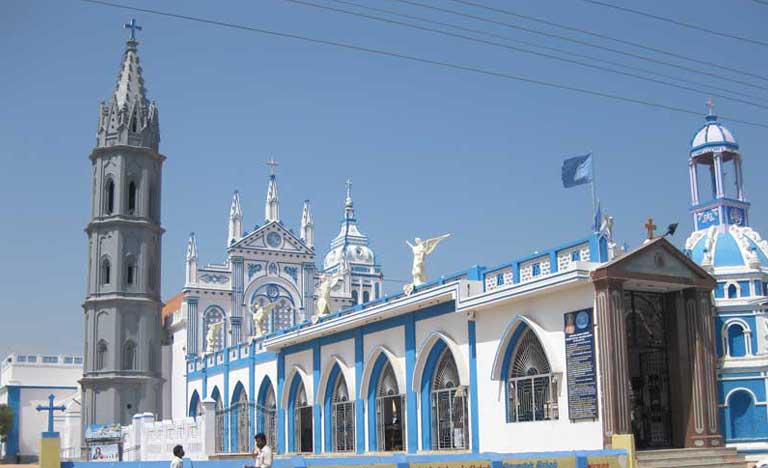 Our Lady Of Snows Basilica, Tuticorin

Basilica is a Greek term signifying a Royal Hall, which in time has come to mean a large and beautiful hall. It is the greatest honour for a church to be raised to the status of a Basilica. The 400th Anniversary of the Our Lady Of Snows Basilica, Tuticorin was marked by Paul John Paul II raising it to the status of Basilica through his apostolic letter dated 30th July 1982.

Paniya Matha Church, also known as the Shrine Basilica of Our Lady of Snow is no doubt the most famous tourist attraction of Thoothukudi. Its popularity among the tourists can be understood from the fact that it is believed to be visited by the great St. Francis in 1542. The church is located in Thoothukudi and is visited by many all around the year. The church is located at a mere distance of about 7 Km from Thoothukudi and takes around 10 minutes to reach the place.

History of Our Lady Of Snows Basilica, Tuticorin

She has been given the unique title of Yelu Kadalthurai, Yega Adikala Thai in Tamil which means the Mother of Refuge for the seven major coastal villages, viz Vembar, Vaippar, Thoothukudi (Snows Basilica, Tuticorin), Punnaikayal, Virapandianpatinam, Thiruchendur and Manapad (Thoothukkudi District).

Our Lady of Snows Shrine Basilica (Snows Basilica) at Tuticorin, was built during 16th century in the Portuguese architecture. As a token of gratitude to their redeemers, the Portuguese, the people from about 22 villages numbering about 30,000 embraced Christianity in the year 1535-37. In 1542 St. Francis Xavier visited the shrine (Tuticorin) to catechize the paravars, the indigenous people of the Pearl Fishery Coast, and to strengthen them in Christian faith.

In 1982, when the Church of Our Lady of Snows celebrated its 400th anniversary, Pope John Paul II raised it to the status of Basilica through his apostolic letter Pervenute illa Dei Beatissimae Genitricis Effigies. The renowned shrine of virgin Mary stood up at seashore in the year 1582. Ever since all the devotees are blessed and cared by Mary.

The statue was originally placed in the chapel of the Augustinian Sisters in Manila. St. Francis Xavier wanted to install it in Tuticorin. On hearing of his death, the statue was sent by ship to Tuticorin. The local fishermen or paravars referred to Our Lady of Snows as Yelu Kadalthurai, Yega Adikala Thai in Tamil which means the Mother of Refuge for the seven major coastal villages – Thoothukudi (In English it is called as Tuticorin).

Virapandianpatinam, Thiruchendur, Vembar, Vaippar, Punnaikayal and Manapad. Traditionally, this region was famous for Pearl from the time of Pandyan dynasty. In the year 1535 AD, the local fishermen who had territorial issues with the Moslem intermediaries, had resolved the issues with the help of Portuguese.

The persecution of the Catholics continued after several years – this time under the Madurai Nayak. The Christian converts sought refuge in the nearby island – Raja Theevu. Eventually, members of the Society of Jesus, brought back the statue of the Lady of Snows to Tuticorin in the year 1610 AD.

Statue of Our Lady of Snows

The statue of Our Lady of Snows was taken away for a few years and installed in a nearby island. It was returned to the church in 1610. Many miracles have been associated with this statue. It is due to some of these that the custom of drinking the water that washes the shrine of Our Lady and the oil from the lamp originated. When this beautiful wooden statue was miraculously found in Tuticorin, it was placed in the church of Mother of Mercy and over time it came to be called church of Our Lady of Snows.

It was the name selected by God the Father to His favored Daughter. In this world of turbulent waters, she is the guiding Star showing us the true path. St. Bernard says that there cannot be a better name to our Divine Mother. For just as the star spreads its rays of light without losing its own light, the Virgin Mother brought forth her Divine Son the Light of the world (Jn 8:12), without losing her virginity.

This Star illuminates the whole world. It warms the minds, increases virtues and destroys wickedness. It is the shining example for us all to emulate and its light exhibits the graces and prerogatives enjoyed by Our Lady.

This star has five points to signify the five extra-ordinary prerogatives of Our Divine Mother, viz. (i) her Divine Motherhood (ii)) her Immaculate Conception (iii) her perpetual virginity (iv) she is the channel of Divine grace and (v) she is the Gate of Heaven.

The nine gold fishes circulating under the great Star indicates the circulation of the nine planets around Our Lady, the Head Star, thereby signifying that God has appointed Our Blessed Virgin as the Sovereign ruler of the whole universe. The seven rays coming out of the Star indicate the seven gifts of the Holy Spirit.

The royal crown whereon rests the big Star, is the most wonderful workmanship of art that adds beauty to the Golden Car. It signifies the fact that Our Blessed Virgin was crowned as the Queen of Heaven and earth. Thus it signifies that all men are under her sovereign rule and as such they belong to her. It also indicates her power to drive away Satans armies as well as heresies.

Just below the golden crown is the throne of God. God the Father stands there in the figure of an aged person. This reminds the faithful that the Blessed Virgin is the well beloved Daughter of God, the Father. The liturgy of the Church addresses Our Lady as O Virgin, first conceived in the Spirit of the Creator (Hymn, First Vespers, The Feast of Assumption : The Breviary).

Let Heaven and earth rejoice, for Mary, the Byzantine Liturgy (Sept 8). St. Peter Damian says: God dwelt in Mary in a kind of substantial union, because He Himself is the Mother. Hence a prominent place to God the Father in the Golden Car.

Between Mary the Immaculate and the Holy Spirit, there is a deep union not only, because Mary’s will is absolutely conformed to that of the Holy Spirit, as a dutiful spouses would be, but also because she was always conscious and free instrument in His regard, a true handmaid, but more precisely because the Holy Spirit, dwells in her as in His privileged sanctuary.

The annual festival of Paniya Matha Church is one of the most famous festivals of Thoothukudi and is celebrated on August 5th. The festivities begin on July 26th with the feasts of Saints Joachim and Anne, the parents of Mary. It is celebrated with pomp in Tuticorin and thousands participate. There are music performances, dance programs and stalls selling handicrafts, foodstuff and garments.

The practice of a golden car procession began around 1720 when the statue of Our Lady of Snows was reinstalled in Tuticorin. A new golden car of 53 feet was built for the procession. The height is symbolic of the 53 beads of the rosary. The annual feast that would start with the flag-hoisting on July 26th would culminate with the High Mass to be celebrated on August 5th every year.

Mass Timings in Basilica of Our Lady of Snows Church

Our Lady Of Snows Basilica, Tuticorin, Tamilnadu is well connected with Bus Station, Railway Station and Airport facilities rest of the country.

Tuticorin Domestic Airport, Tamilnadu, Which is (20.9 Kms) from Our Lady Of Snows Basilica, Tuticorin.

The nearest railway station is Tuticorin Railway Station which is just 1 Km from Our Lady Of Snows Basilica, Tuticorin.

The nearest is Tuticorin, Old Bus Station which is (2.6 Kms) from Our Lady Of Snows Basilica, Tuticorin.