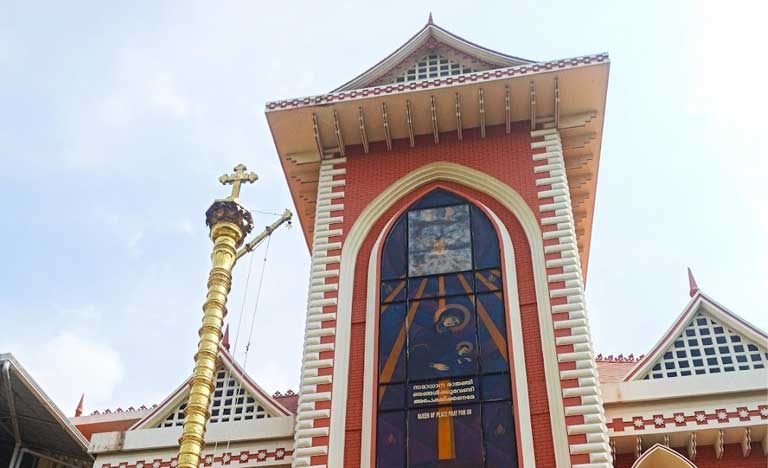 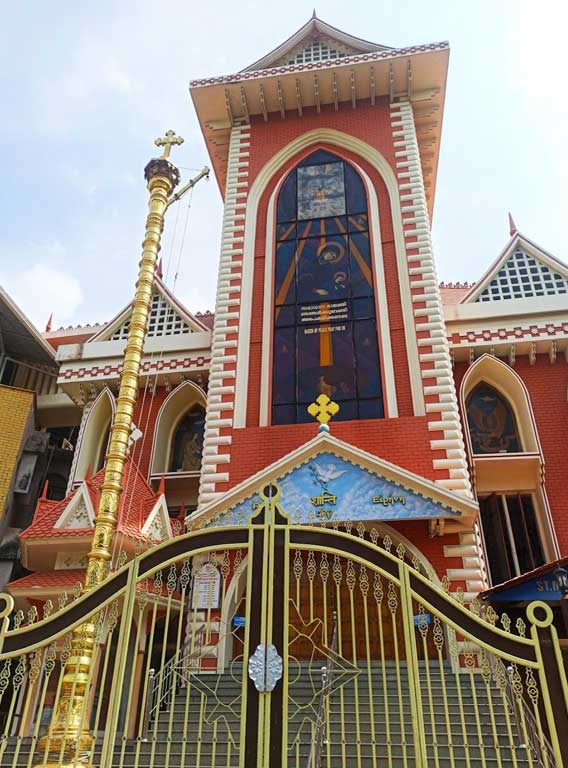 Saint Mary Queen of Peace Basilica, Palayam located in the heart of Thiruvananthapuram city (Palayam / Cantonment) in the state of Kerala, India is the first house of worship of the Syro-Malankara Catholic Major Archiepiscopal Church to be elevated to the rank of a Catholic basilica. It is the fourth basilica in Kerala.

The former Pompador Cinema Theatre in the Palayam area of Trivandrum was converted into a church, and consecrated on March 11, 1933. The enthronement of Archbishop Mar Ivanios took place in this pro-cathedral on the same day. The roof of the new church was made of tin sheets, therefore people called it the ‘Tin Church’ (Thakara Palli). In 1991 the ‘Tin Church’ was replaced with a new building; Archbishop Benedict Mar Gregorios dedicated this new church to St. Mary, Queen of Peace.

The Saint Mary Queen of Peace Basilica, Palayam ranks among the finest churches of India and is situated in the Palayam (Cantonment) area of the city of Trivandrum (now Thiruvananthapuram), in the state of Kerala. The foundation stone of this Cathedral was laid Archbishop Mar Ivanios in 1950 and he was enthroned as the first Archbishop of Trivandrum and the Head of the Malankara Catholic church. The Cathedral was consecrated by Archbishop Benedict Mar Gregorios on February 22, 1965. Pope John Paul II paid a visit to this Cathedral on February 8, 1986 as part of his India tour.

On 10 November 2008, at the St. Mary’s Cathedral, Pattom, Trivandrum, Leonardo Sandri, Papal representative and Cardinal Prefect of the Congregation for the Oriental Churches, announced the designation of the Queen of Peace Pro-Cathedral in Thiruvananthapuram as a basilica. Major Archbishop Moran Mor Baselios Cleemis Catholicos dedicated the church as the St. Mary, Queen of Peace Basilica on 7 December 2008. Kerala Minister M. Vijayakumar presided over a meeting that followed.

Basilica News Bulletin. The majority of the Basilicas in south India shows the spread of Christianity in South India. An unofficial study puts the number of ordained priests hailing from South India at a little over 45 % for the entire India.

Saint Mary Queen of Peace Basilica, Palayam was blessed and named in honour of the Mother of God by His Grace Archbishop Mar Ivanios on 11 March 1933.

The Apostolic Constitution, Christo Pastorum Principi (11 June 1932), of the Holy father Pope Pius XI,establishing the Syro-Malankara Catholic Hierarchy comprising the metropolitan Eparchy of Trivandrum and the Eparchy of Thiruvalla was officially proclaimed and executed in this church on 12 March 1933 by the Rt.Rev.Aloysius Maria Benziger, The delegate of the Holy See and the Bishop of Quilon (Kollam).

The First Holy Qurbono was celebrated in this Church on 12 March 1933 by His Grace Archbishop Mar Ivanios along with the Most Rev. Jacob Mar Theophilos, the Bishop of Thiruvalla, the Rt.Rev. Philipose Cheppad Remban and the Rt. Rev. Joseph Pulikottil Remban. The Most Rev. Augustine Kandathil, the Archbishop of Ernakulam graced the occasion with his presence.

The proclamation of the Papal Bulla, appointing Archbishop Mar Ivanios as the Metropolitan Archbishop of Trivandrum and the Hierarchical head of the Syro-Malankara Catholic Church, and the enthronement ceremony with the acclamation of Oxios took place in this church on 12 March 1933. The Church served as the Pro-Cathedral of the Archdiocese of Trivandrum till 1967.

His Grace the Most Rev. Benedict Mar Gregorios, the successor of Archbishop Mar Ivanios, reconstructed the church building, blessed and rededicated it in the name of St. Mary Queen of Peace on 22 September 1991. Inscriptions in various languages indicating peace (Shalom) adorn the inner and outer walls of the church.

The church, which is adjacent to the Sree Shakti Vinayaka Temple and the Juma Masjid, is a symbol of tranquillity and religious harmony in the heart of the capital city of Kerala. The church offers a haven of peace, in the midst of a teeming metropolis, to hundreds of people of different faith every day.

The structure of the church embodies the architectural inheritance of our ancient land. It is in consonance with the adjacent buildings known for their historical importance, namely the Victoria Jubilee Town Hall (VJT Hall0, and the H.H. Maharaja? University College. The Statue of Our Lady enshrined in front of the church is well known for its historical importance as well as miraculous powers. The Shrine was reconstructed and blessed by Moran Mor Cyril Baselios Major Archbishop Catholicos on 7 July 2000.

The Church celebrated its Platinum Jubilee in the year 2007? 2008 It was here the mortal remains of the servant of God, Archbishop Mar Ivanios, Archbishop Benedict Mar Gregorios and Major Archbishop Cyril Baselios Catholicos were laid out for public veneration. Their funeral procession started from this hallowed house of worship.

According to the request of His Beatitude Moran Mor Baselios Cleemis, Major Archbishop Catholicos, during the Platinum Jubilee of the Archdiocese of Trivandrum (2007-2008), the Supreme pontiff Pope Benedict XVI, as a memento, granted this Church of St. Mary Queen of Peace the title and dignity of ?Basilica? with all its rights and liturgical privileges on 13 October, 2008.

The Formal announcement of the Basilica was done by His Eminence Leonardo Cardinal Sandri, the prefect of the congregation for the Oriental Churches during his visit to this church on 10 November 2008.

The Church was elevated into the status of Basilica through a solemn liturgical ceremony by His Beatitude Moran Mor Baselios Cleemis, Major Archbishop Catholicos on 7 December 2008.

This is the only Basilica ever to be dedicated in honour of? St.mary Queen of Peace? in the whole Catholic Church and the First Basilica in the Syro-Malankara Catholic Church. It is also the first of its kind in the capital city of Kerala.

The nearest railway station is Tuticorin Railway Station which is (2.7 Kms) from St. Mary Queen of Peace Basilica, Palayam.

The nearest is Tuticorin, Old Bus Station which is (2.9 Kms) from St. Mary Queen of Peace Basilica, Palayam.