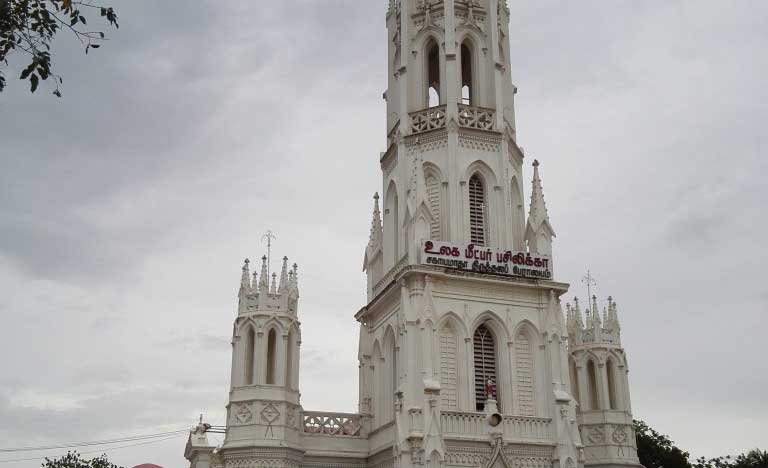 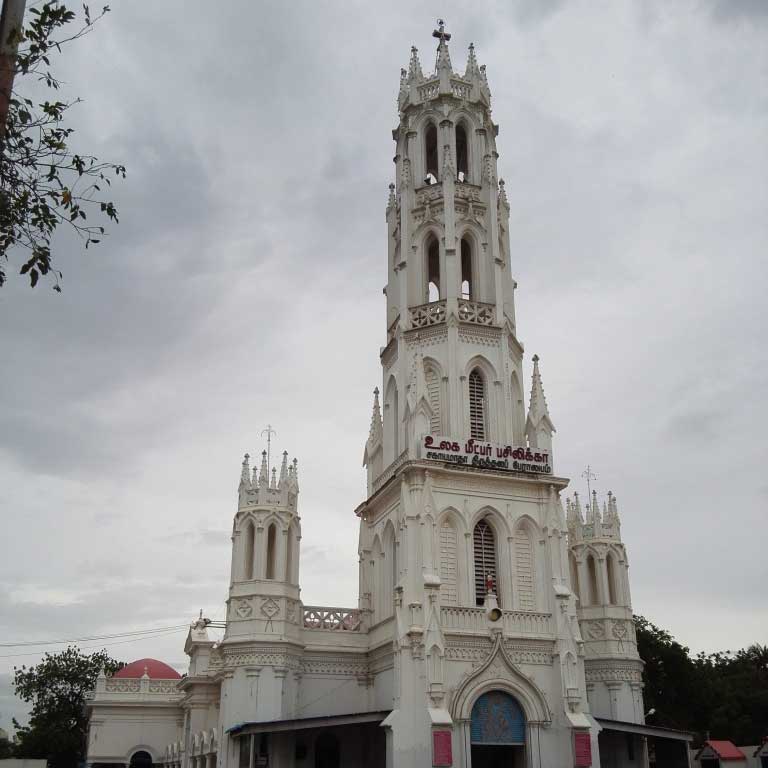 Basilica of the Holy Redeemer, Trichy, Tamilnadu, India built in just 16 months and commissioned in the year 1881. Christianity came to Trichy through the A.D. Madurai Mission in 1616 as well as a little earlier by St. Francis Xavier. The land where the church is built was donated by Diwan Kanjamalai Mudaliar as a token of gratitude to Rev. Fr. Koris. A small Christian community comprising around 7500 chose to offer their prayer at the St. Mary’s Cathedral, Trichy, instead of at Our Lady of Sorrows because the latter was under the administration of the Portuguese Padroado.

The church gained special significance in 1957 when the parish priest Rev. Fr. A. Thomas started a novena to Mother of Perpetual Succor and many miracles were seen here. People of all faiths were drawn here and there was a general awakening of spiritual life. Upon recommendation, the church was upgraded to the status of a Basilica in 2006.

The architectural beauty, as well as the artistic paintings in this basilica, attracts people from all faiths for a look and a prayer. There is an exquisite painting here of Mother of Perpetual Succor believed to have been painted by St. Luke, that holds special significance. Over the right shoulder of Mother Mary is written M.T. or ‘meter’ meaning ‘Mother’ and over her left shoulder are the letters ‘TH.u’ which refer to ‘Theou’ or God. Put together, the words mean ‘Mother of God’. Another significant feature in this painting is the letters “IS Chs” written opposite infant Jesus’ head. It refers to “Iesous Christos” or ‘Jesus Christ’.

History of the Holy Redeemer

1616 A.D. Madurai mission came to Trichy. It paved the way for Christian faith also to enter. In course of time the Jesuit missionaries got the righteous support of Madurai Naicker of the lineage of the Madurai kings. King Naicker shifted the capital and throne from Madurai to Trichy. Already the king’s military officers and soldiers had been converted by Robert-De -Nobili, a missionary. Through them Christianity found its way to spread in Trichy. Earlier Christianity spread through St. Francis Xavier also.

Trichy remained a sub mission station in Madurai religious province. There were a large number of Christians in the three areas of Palakarai, Dharmanathapuram (Hirudhayapuram) and Varaganeri. Even before Holy Redeemer’s church was built there were about 7500 Christians. They had to go to St. Mary’s Cathedral built by the Jesuits, for Holy mass and the sacraments. The way was full of grass and bushes without any facility for travel. Moreover secessionist groups carried out propaganda against faith.

Though our Lady of Sorrows Church (at present known as Palayakoil) was nearby, they could not even go there because it was in the possession of the Portuguese priests. Even in the midst of all this, the people remained firm in their faith. Therefore, it became indispensable that a church had to be built in Palakarai area.

In those days of the British rule, Trichy was under the rule of Diwan Kanjamalai Mudaliar. The place where the Holy Redeemer’s Basilica is built and the land surrounding it, was given by Diwan KanjaMalai Mudaliar as a token of gratitude to Rev. Fr. Koris for a favour done to the Diwan.

When the Jesuit missionaries moved over to Thiruchirapalli also called Trichy, Tamil Nadu, India to spread Christianity as far back as 1600s and 1700s, there were a very small population of Christians living in this area. The Jesuit carried on their missionary work through Madurai mission that included Robert de Nobili and Constanzo Beschi. These Jesuits later became scholars of repute in Tamil, the native language spoken here. The conversion in Trichy took place in 1616. The Hindu  Nayak rulers of Madurai and also Thanjavur (Tanjore) gave ample support to the Jesuits.

The Basilica of the Holy Redeemer located in Palakkarai Tiruchirapalli was the old one built by Cato on a huge land donated by the local Hindu ruler, Diwan Kanjamalai Medullar. This historical church’s first building was built during the British East India rule. The construction work began in 1846. As part of expansion work to meet the growing Christian community in this area, Bishop Alexis Canoe, S.J laid the foundation for a new church on 9 February, 1880 and the Basilica was consecrated on 29 June 1881 by the Vicar Apostolic of Pondicherry, Msgr. Francois-Jean-Marie Laouenan, M.E.P. Believe it or not, it was then the largest church in the Indian sub-continent.

On February 9th 1880, MSGR Canoz laid the foundation for the new church. On June 29th, 1881, a new church -well-built sturdy, full of artistic paintings and which filled the onlookers with wonder – was elegantly built and was blessed by Pondicherry Archbishop MSGR Lovenan in the presence of MSGR. Canoz. That such a wonderful church was built in just 16 months is one of its special features.

The basilica has excellent and impressive paintings of incidents associated with the life of Christ.  In the year 1881 the ‘Big Bell’ was added, a contribution  from British  Judge Woodroofe. It is the second biggest bell in Tamil. In this Church ‘Sagayamatha’ – Mother of Perpetual Help Basilica is venerated. The high roofed building has a  main, wide, slightly elevated aisle flaked by  sub-aisles. The aim of this kind of design was to allow good passage of light. The high roof design allows better aeration considering topical climate. Cato wanted a temporary church to receive British soldiers who were on the move. Trichy also happened to be a cantonment town. The church could accommodate 2000 people at a time. In the early 1900s with arrival the railways, Trichy was a seat of very large population of Angelo Indians and many of them were employees of SIR –South Indian Railways.

Pope Benedict XVI raised the church of the Most Holy Redeemer to the dignity of a minor basilica on 12 October, 2006 on a request for elevation of the church to a Basilica presented by  the Bishop of Trichy, Most Rev. Antony Devotee, while Rev. A. Gabriel was the parish priest.It is one among the  five Roman Catholic minor basilicas in the southern state of Tamil Nadu, India.

In 1957, when Rev. Fr. A. Thomas was the parish priest, the novena to Mother of Perpetual Succour was started by a Redemptorist priest Rev. Fr. Francis. As many miracles took place through Mother of Perpetual Succour, people from different religions started coming there every Wednesday. There was an awakening in the people’s spiritual life. In 2006, through the efforts of Rev. Fr. A Gabriel who was the parish priest then and the recommendation of Rt. Rev. Dr. Antony Devotta the Bishop of Trichy, Pope Benedict XVI raised this church to the status of Basilica on October 12th 2006.

Basilica of the Holy Redeemer, Trichy, Tamilnadu, India is well connected with Bus Station, Railway Station and Airport facilities rest of the country.

Trichy International Airport, Tamilnadu, Which is (7 Kms) from Basilica of the Holy Redeemer, Trichy.