Basilica of Our Lady of the Assumption, Secunderabad, Telangana, India 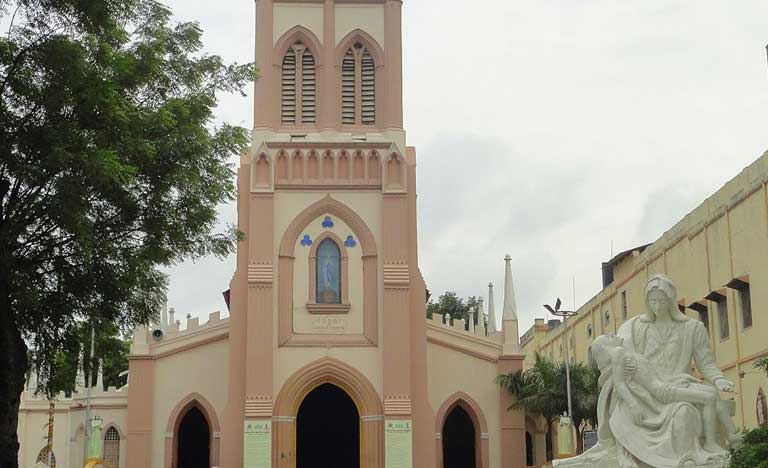 Home » Basilica of Our Lady of the Assumption, Secunderabad, Telangana, India

Our Lady of the Assumption, Secunderabad 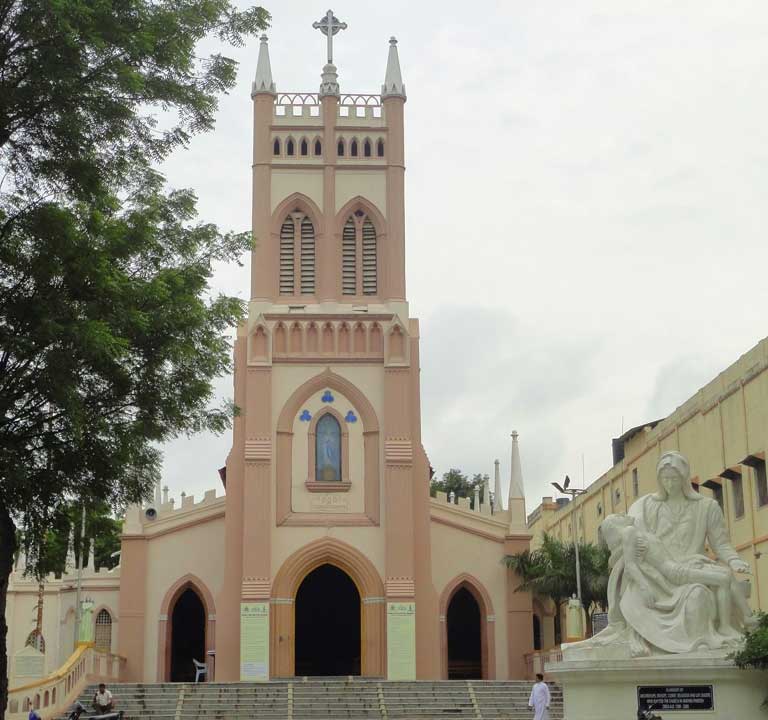 Basilica of our lady of the assumption, Secunderabad (St. Mary’s Basilica) is one among the oldest Roman Catholic churches of India. It was earlier called as the Cathedral of the Archdiocese of Hyderabad and is also known by the name St. Mary’s Church. It is a minor basilica located on Sarojini Naidu Road in Secunderabad and adjacent to the St. Ann’s High School. People from all faiths visit the Church attracted by its architectural beauty. Thus, the church is considered an essential landmark in Secunderabad region.

Dedicated to the Blessed Virgin Mary, the basilica plays a crucial role in the history of Catholics and celebrates its specific recognition as a Basilica. Popularly known for its historical importance and its Basilica status, the church receives thousands of visitors throughout the year from all over the country. The church plays a pre-eminent role in bringing people together through its celebrations of festivals. It organises all the festivals with pomp and piety, making it the attractions for visitors all over the country.

The minor Basilica of Our Lady of the Assumption is the oldest Roman Catholic colonial church in the city and owes its existence to Bishop Daniel Murphy and Bishop Carew.  Fr. Murphy worked among the Irish Catholics in the British army stationed in this area. Some misunderstanding cropped up between the British higher ups and the Irish soldiers in the regiment regarding the possession of the Church. For the rivalry, Bishop Murphy was held responsible and later expelled by Governor General Dalhousie. Upon appeal by Bishop Murphy in the higher court in London to render justice, the court gave the judgment in favor of Bishop Murphy. It was a blow to the British higher authority. This victory was considered the first and prophetic victory against the British authority in India.

St. Mary’s Basilica is an imposing landmark and a magnificent sight on Sarojini Devi Road, Secunderabad. It was formerly known as St. Mary’s Cathedral while it was the principal Church of the Vicariate of Hyderabad.

It is one of the biggest parishes in the ArchDiocese of Hyderabad. 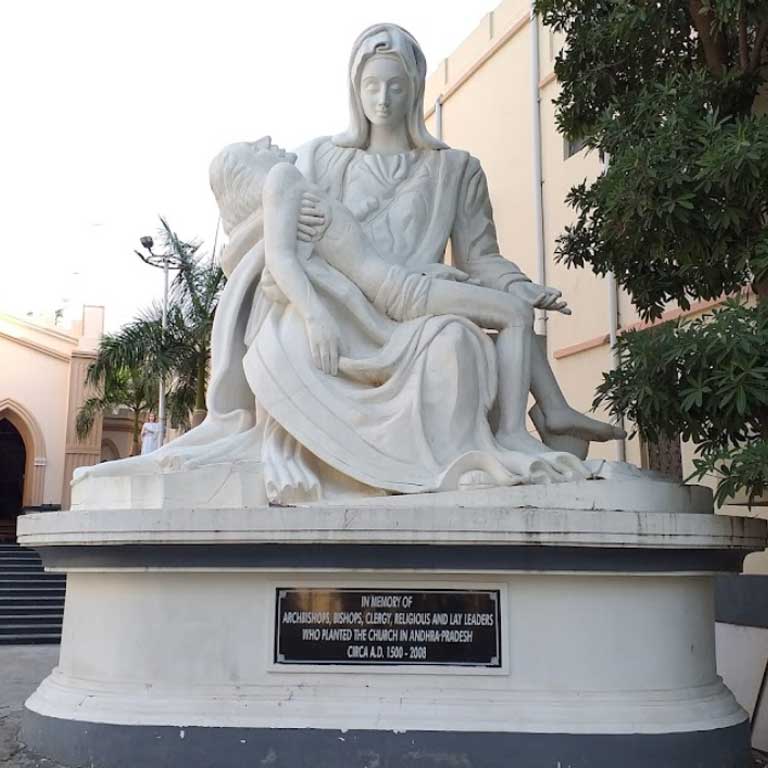 Basilica refers to type of building, which is usually a Christian church and typically rectangular with a central nave and aisles. It features a slightly raised platform followed by an apse at one or both the ends. Basilica of Our Lady of the Assumption, also commonly known as St. Mary’s Church, Secunderabad is a minor basilica, situated in the locality of Secunderabad, India. The decree which designated this church as a basilica was issued in the year 2008.

St. Mary’s Basilica is an imposing landmark, as well as a magnificent sight on the Sarojini Devi Road in Secunderabad. The St.Mary’s Church is the oldest Roman Catholic Churches in the city. This fascinating Church was built in Indo-Gothic style and was sanctified in the year 1850 by Father Daniel Murphy along with Bishop Carew. It was formerly called the Cathedral of the Archdiocese of Hyderabad.

The church is dedicated to the Blessed Virgin Mary. It was principal Church of the Vicariate of Hyderabad. It is one of the famous Churches in the twin cities of Hyderabad and Secunderabad, and also one of the biggest parishes in the Archdiocese of Hyderabad which consists of various linguistic groups such as Anglo Indian, Telugu, English, Tamil, Malayalam, Konkani with more than 4500 Parishioners.

From 1500 till 1832, the Diocese of Hyderabad, then known as the Vicariate of Hyderabad, had small pockets of Christians, who were visited at irregular intervals by missionaries of Theatine Order and Carmelite Fathers.

It was in the year 1839 that Fr. Daniel Murphy at first searched for a place to build a church in Hyderabad, which was then the Capital of the Kingdom of Nizam, where no religion was looked kindly upon except Islam. Secunderabad was therefore considered as an alternative site and in 1840 Fr. Murphy started building St. Mary’s Cathedral which was completed by 1850. He also built St. Francis Xavier Church in Bolarum in 1842.

As years passed, Pope Gregory XVI raised Fr. Murphy to the office of Bishop and appointed him as the first Vicar Apostolic of Hyderabad on 20th May 1851 erecting Hyderabad as an independent Vicariate.

However, Sir Henry Pottinger, the British Resident appears to have crossed swords with Fr. Murphy and for almost two years refused to allow him to return to Secunderabad. Hence, the latter was obliged to live at Chaderghat on the Borders of the Nizams dominion with Fr. O’Brien, Fr. Drake and Fr. Hampson as his assistants.

It is praised for both its architectural excellence and incredible history. In the days when the church was the Vicariate of Hyderabad, it was widely known as St. Mary’s Cathedral. The most striking features of this church are its curved arches and buttress. This unique church has several side altars devoted to the saints. It has four bells, which was brought all the way from Italy in the year 1901.

The church represents the way of living and worship by the peace loving Christian community of Hyderabad and Secunderabad and is a testimony to the city’s reputation as a multi-religious, secular society. The premises of the Church are a delight to one’s eyes during Christmas when the entire area is lit with bright lights. People from all faiths visit the Church for its architectural beauty and is considered a vital landmark in Secunderabad region.

The pronouncement assigning it as a basilica was issued on 7 November 2008. The congregation is situated on Sarojini Naidu Road in Secunderabad. It owes its initial history to Father Daniel Murphy alongside Bishop Carew. St. Mary’s Church was finished in 1850. This congregation was in the past called the Cathedral of the Archdiocese of Hyderabad. In 1886, it stopped to be a cathedral. In 1871, a couple of nuns from St. Anne at Turin came here and opened a school that is well known as St. Ann’s school.

The congregation is a regular case of the Indian Gothic style, with bended curves and pointed supports. Similarly as with other Catholic holy places, St. Mary’s has a few side holy places devoted to holy people. The congregation has four ringers, which were brought from Italy in 1901. One of the ringers is accounted for to have created breaks. The congregation started with crafted by Fr. Daniel Murphy among Irish Catholics in the British Army. He landed in India in 1839, and started the development of St. Mary’s congregation as a cathedral in 1840. It was finished and favored in 1850, and was around then the biggest church in Hyderabad State.

In 1840, Fr. Daniel Murphy, one of the Irish Catholics in the British Army, started planning to build the church and the construction was completed in 1850. The mere sight of the Church evokes awe-inspiring beauty, owing to its magnificent sight and the stunning architecture.

Fr. Daniel Murphy was instrumental in starting the construction work of this church which was completed and blessed in 1850. Relatively simpler from inside, St. Mary’s church is an excellent example of the use of Gothic Architecture with curved arches and pointed supports. At that time, it was the largest church in the state of Hyderabad. The fascinating features are the four church bells which were bought from Italy in 1901. It also has several side altars dedicated to specific saints. St. Mary’s is a result of blending the European structures to a more lively style. It also has a museum featuring the church’s history and pictures. A statue of the ‘Mother of Sorrows’ with crucified Jesus in her lap is a recent addition. This is one of a few colonial buildings left behind in this area. One can hardly see old churches with a clock tower. There is a beautiful statue of Mother Mary installed in a niche in the front part of the tower.

The church celebrates ‘Feast of the Assumption of the Blessed Virgin Mary’ every year in mid-August.

Formerly called the Cathedral of the Archdiocese of Hyderabad in 1886, it was no longer a cathedral. This church, built in Gothic style of architecture with majestic arches, is dedicated to the Blessed Virgin Mary because the foundation was laid on the feast day of Mother Mary’s Assumption – August 15, 1847. Like other Catholic churches, St. Mary’s has several side altars dedicated to saints.

Lots of people belonging to other faiths also come to this old historical church, light up candles and pray to Mary with deep devotion and faith to solve their problems. On September 8, 2013 the Vatican bestowed the ‘Basilica’ status on this church that happened to be the birthday of Mother Mary. It is a rare distinction very few churches in the world get from the highest authority in Vatican. This church is worth visiting.

Rajiv Gandhi International Airport, Hyderabad, Telangana which is (36.6 Kms) from Basilica of Our Lady of the Assumption, Secunderabad.

The nearest railway station is Secunderabad Railway Station which is just 1 Km from Basilica of Our Lady of the Assumption, Secunderabad.

The nearest is Secunderabad Bus Station which is just 1 km from Basilica of Our Lady of the Assumption, Secunderabad.