Shrine of Our Lady of Sorrows, Stary Wielisław, Poland 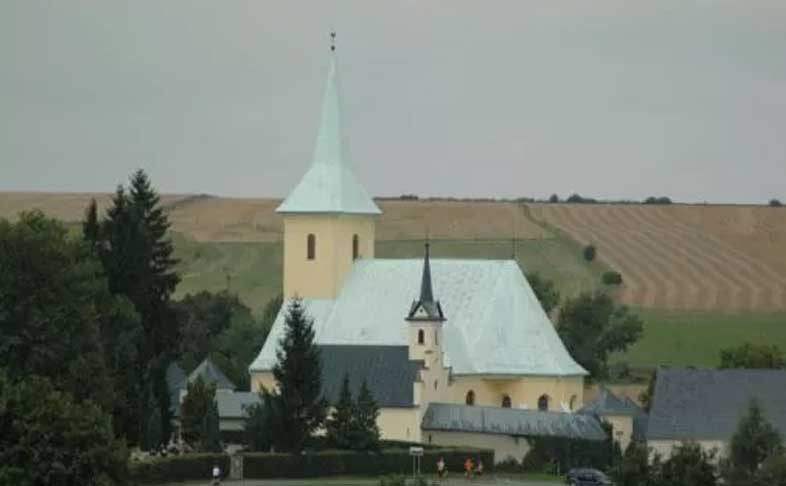 Home » Shrine of Our Lady of Sorrows, Stary Wielisław, Poland

Shrine of Our Lady of Sorrows

The Shrine of Our Lady of Sorrows is a church in the Stary Wielislaw, Poland also known as Sanctuary of Our Lady of Sorrows. The history of the church dates to the tenth century, although the current structure dates only to the 15th century. It is one of the eight International shrines of the Roman Catholic Church.

The church in Stary Wielisław near Polanica Zdrój, in whose main altar has been a statue of the Virgin Mary for centuries, was called the Heavenly Shrine by Pope Boniface VIII in 1300.

The church in Stary Wielisław already existed in the 10th century. On the way to Gniezno, St. Wojciech, The year 1300 turned out to be particularly memorable, when Pope Boniface VIII issued a bull in which he called the Wielisław temple the Heavenly Sanctuary and established it as a pilgrimage church. The first church in Stary Wielisław, burnt down in 1428 by the Hussites, was replaced with a brick one. The current one was built in the 15th century and expanded in the 16th and 18th centuries.

History of Shrine of Our Lady of Sorrows 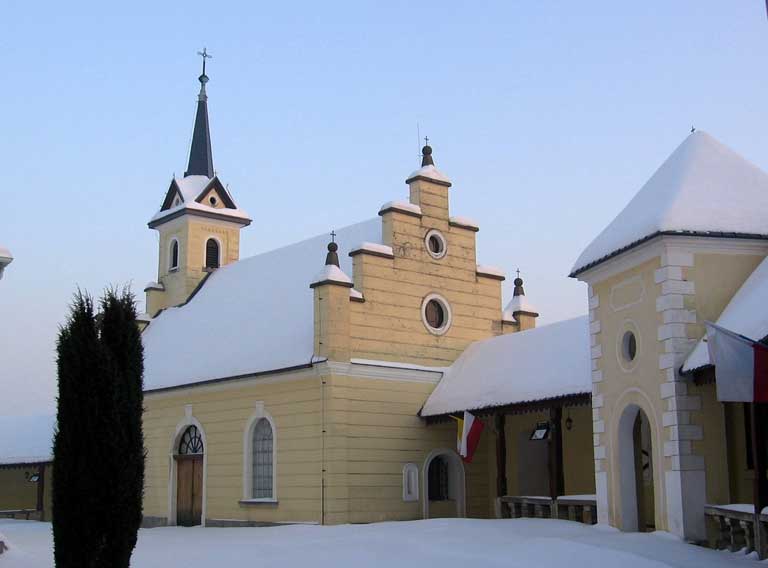 The interior is mainly Baroque and Rococo. The church is dedicated to St. Catherine of Alexandria, whose relics were brought here in 1660 from Rome. The pilgrimage movement intensified after 1713, when the plague wreaked terrible havoc in the area, but it did not affect anyone in Stary Wielisław, where prayers were prayed for salvation. Church in Stary. The church in Stary Wielisław remained Catholic even in the years 1618-1622, when the Kłodzko County was swept by a wave of Protestantism during the Thirty Years’ War. The new faith was brought by the Lutheran armies, often looting, burning and murdering at the same time.

In Stary Wielisław, pilgrims could rest, for example, in the cloisters that run around the church, which belongs to the group of defensive churches. The Kłodzko County was going through a turbulent history, especially during the Hussite invasions and the Thirty Years’ War. The fortifications of the churches where the usually threatened population were sheltering, was therefore a necessity. The impressive chapels built into the perimeter of the high wall resemble watchtowers or towers. From 1490, the bell called for prayer, but also warned against danger, for centuries and is ringing to this day.

The figurine of the Virgin Mary standing in the main altar of the church, famous for miracles, most probably dates back to the 13th century. The traditional message says that the figure survived the fire that consumed the church in Wielisław during the Hussite invasion. 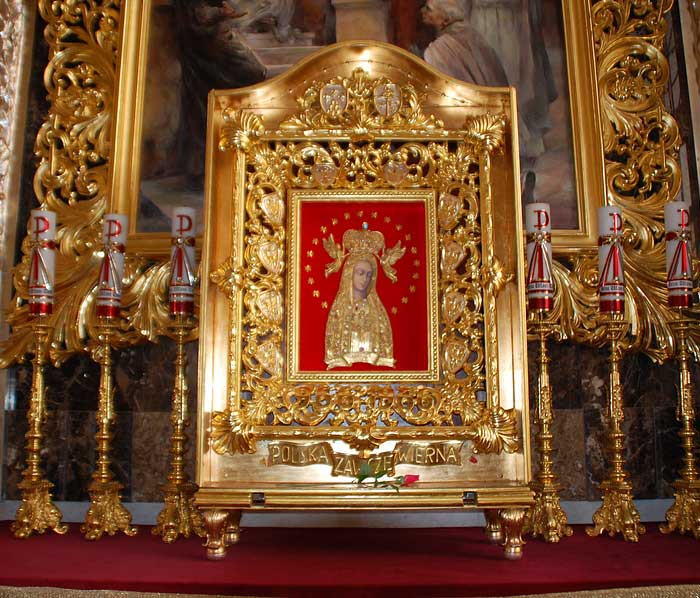 Mary's Order to Carve Her Image

Legend tells about a rich man named Schneider, who in a dream heard Mary’s order to carve her image. The figure from Wielislaw was depicted with a sword in his heart. On the back of the image there is a cross, a sponge on a long stick and a spear, the attributes of the Lord’s Passion. For this is how, as Our Lady of Sorrows, standing under the cross, Mary was to appear to Schneider. The cross and the attributes of the Passion are visible in the background of the figure in the main altar of the Wielisław sanctuary.

The Congregation of the Sacred Hearts of Jesus and Mary has been the legal owner of sacred buildings since 1972. Miracles have happened here “since always” – chronicles mention many such cases. It is worth mentioning the most spectacular, such as the miraculous healing of the partially paralyzed Maria Magdalena Neuceckin from Gorzanow, who, apart from paralysis, also suffered from severe headaches. When medical measures failed, she ordered to be brought to the  Church in Stary Wielislaw, where she suddenly recovered.

The local parishioner, Miroslaw, who was hit by a drunk driver, would also like to thank the local parishioner for a miraculous recovery. Despite the quick help, Miroslaw did not regain consciousness for a long time. His parents prayed for his life. He came to church in a wheelchair to thank Mary. Now he comes on its own. 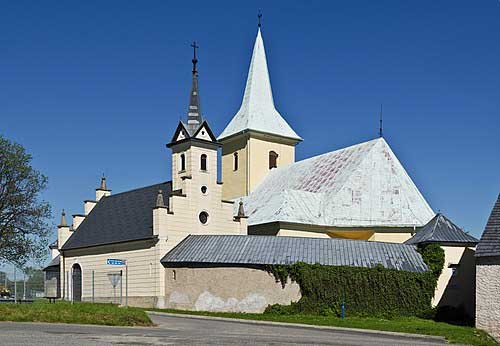 The second indulgence takes place on the patronal day of St. Catherine of Alexandria November 25.

The sanctuary was visited by: Primate Cardinal Stefan Wyszynski after being released from prison and Fr. Karol Wojtyla as an academic chaplain and the second time when he was already the bishop of Krakow. This is commemorated by a plaque placed at the entrance to the church.

In 2000 the year of the Great Jubilee of Christianity and the 1000th anniversary of the Wroclaw Diocese, Fr. Cardinal Henryk Gulbinowicz, Metropolitan of the Archdiocese of Wroclaw, reactivated the Sanctuary of Our Lady of Sorrows in Stary Wielisław.

On September 16, 2001, Fr. Cardinal Henryk Gulbinowicz, Metropolitan of the Archdiocese of Wrocław, elevated the Wielisław Sanctuary to the rank of an International Sanctuary, because Czechs, Poles, Germans and other nationalities came to this place, sanctified by the prayers of the faithful.

The celebrations were presided over by Card. Of the League of Pogii from the Vatican, personal envoy of Pope John Paul II.

Here, inter alia, relics of the Holy Cross, St. Catherine of Alexandria and a replica of the nail that nailed the hand of Jesus to the cross, and the model in Austria in the national museum. 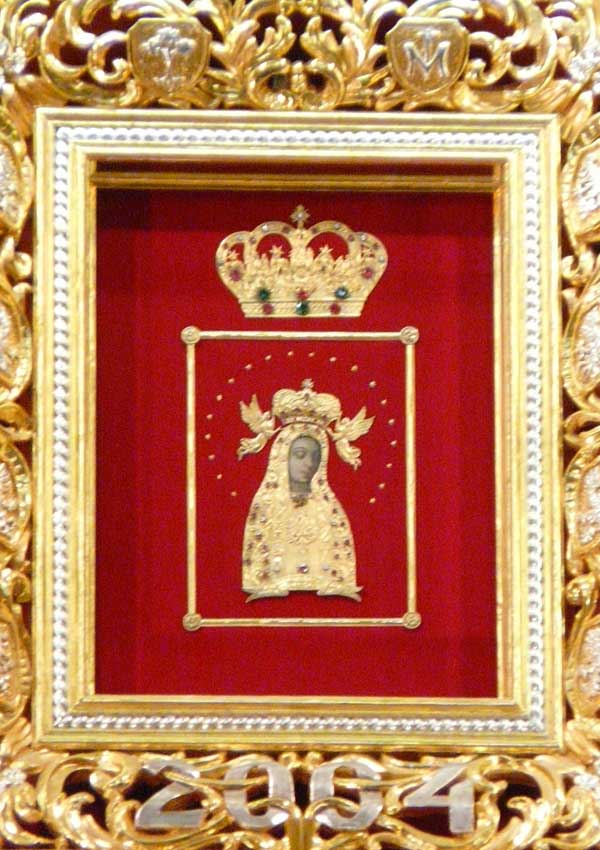 Blessed Virgin Mary, Our Lady of Sorrows – Wielisławska, whose soul was pierced by the sword of sorrows, obtain for us from your Son the forgiveness of sins and an abundance of saving grace, and teach us to cooperate with them so that they may bear us a hundredfold fruit. And also obtain for us a blessing in all our works, especially when we meditate on the salutary sufferings of you and your Son Jesus, shown in your heart with the open heart of your Son, who loved us to the end, so that we may deserve eternal glory in heaven where your Son lives Amen.

The Seven Sorrows of Mary are a popular religious theme and a Roman Catholic devotion. In Christian imagery, the Virgin Mary is portrayed sorrowful and in tears, with one or seven long knives (daggers) piercing her. 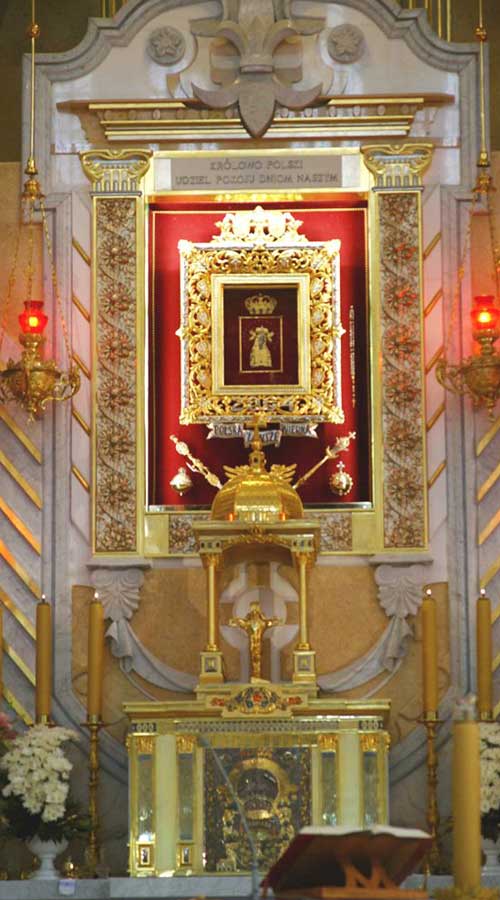 Sanctuary of Our Lady of Sorrows,
Stary Wielislaw,
83b, 57-300 Klodzko, Poland

How to Reach The Sanctuary

Lodz Airport Central Poland also known as Łódź-Lublinek Airport, is a regional airport in central Poland, located approximately 6 km southwest of Łódź city center is the nearby airport to the Sanctuary.