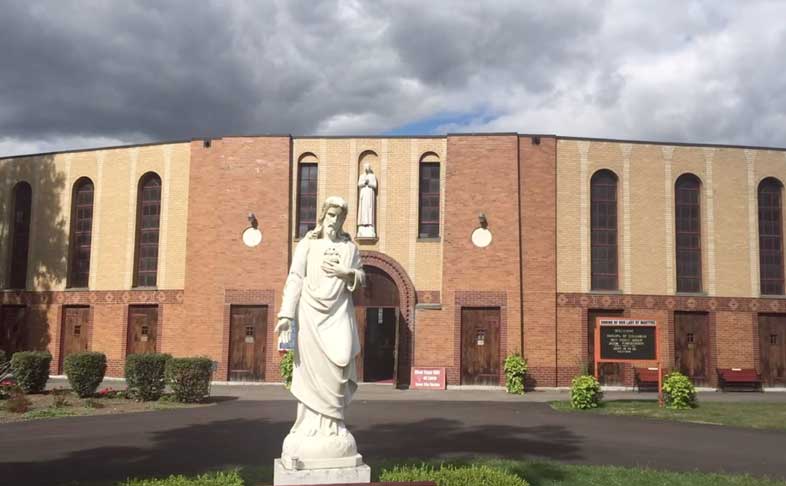 Our Lady of Martyrs Shrine

The Shrine of Our Lady of Martyrs is located in the hamlet of Auriesville in Fultonville, New York, United States. Once the 17th Century Mohawk Village of Ossernenon, it is now a Roman Catholic shrine dedicated to three Jesuit missionaries who were martyred here, and to St. Kateri Tekakwitha, a Mohawk, Algonquin woman who was born here.

For over 130 years, the Shrine was under the ownership and direction of the Society of Jesus (Jesuits), but is now owned and operated by the Friends of Our Lady of Martyrs Shrine, a board of volunteers dedicated to maintaining both the sanctity and viability of these holy grounds.

The National Shrine of the North American Martyrs, also dedicated as the Shrine of Our Lady of Martyrs, is a Roman Catholic shrine in Auriesville, New York dedicated to the three Jesuit missionaries who were martyred at the Mohawk Indian village of Ossernenon in 1642 and 1646.

In 1642, a small band of Jesuit missionaries set out from Sainte-Marie among the Hurons, a settlement in Ontario, Canada, to work among the Huron tribe of upstate New York and the territories in Canada. They were captured en route by a party of Mohawks, a tribe of the Iroquois confederacy, and enemy of the Huron. Rene Goupil, a surgeon and later Jesuit lay brother, and Father Isaac Jogues were brought to the Mohawk settlement of Ossernenon.

Caught teaching a child the sign of the cross, Goupil was felled with a blow from a hatchet and died. He was the first of the order in the Canadian missions to suffer martyrdom. Jogues remained a captive for thirteen months before Dutch traders and minister Johannes Megapolensis from Fort Orange (Albany) paid a ransom and gained his freedom from the Mohawk; they arranged for his transportation by boat to New Amsterdam, from where he returned to France.

Jogues returned to New France in the spring of 1644. He gave the name of “Lake of the Blessed Sacrament” to the body of water called by the Indians Horicon, now known as Lake George. In 1646 Jogues, accompanied by John LaLande, a lay missionary, was sent to negotiate peace with the Iroquois. In late September he began his third and last journey to the Mohawk. In the interim sickness had broken out in the tribe and a blight had fallen on the crops. This double calamity was ascribed to Jogues, whom the Indians always regarded as a sorcerer.

The news of this change of sentiment spread rapidly, and though fully aware of the danger, Jogues continued on his way to Ossernenon. All his companions except Lalande fled. The Mohawk captured him near Lake George, beat him and led him to the village. On 18 October 1646 when entering a cabin, Jogues was struck with a tomahawk and killed. LaLande was killed the next day, while trying to recover Jogues’ body. Together with Goupil, they are the only canonized Roman Catholic martyrs of the United States. (The Russian Orthodox Church canonized two martyrs — St. Peter the Aleut and St. Juvenal of Alaska in 1970).

History of Shrine of Our Lady of Martyrs 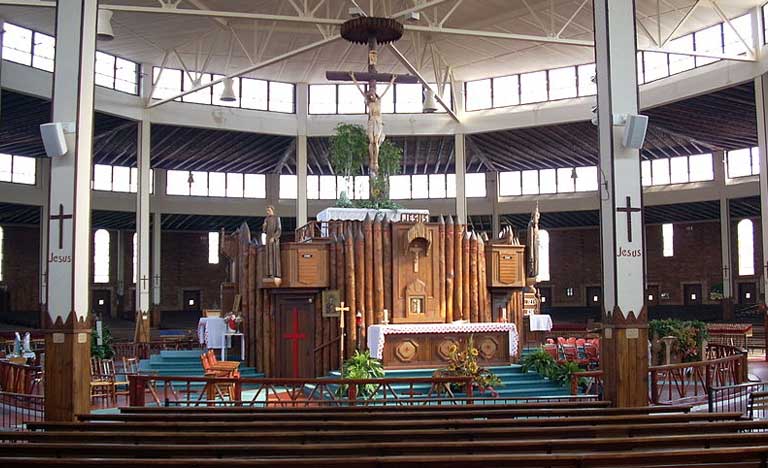 In 1642, Father Isaac Jogues and René Goupil were captured by Mohawks while running supplies along the Mohawk River.  They were taken to Ossernenon where they were tortured and enslaved.

Rene Goupil was killed on September 29, 1642 because he had blessed a boy with the sign of the cross.  He died praying the rosary and his body was buried by Father Jogues in a ravine which is located on the present property of the Shrine of North American Martyrs.

Father Jogues managed to escape to France with the help of Dutch settlers, but he later returned to Ossernenon with John Lalande as peace ambassadors.  John Lalande was just a teenager at the time.

Father Jogues was killed by the Mohawks on October 18, 1646 when a box of his belongings was blamed for crop pestilence.  John Lalande was killed the next day when he tried to collect the corpse of Father Jogues.

Ten years later, a female child named Tekawitha was born in Ossernenon.  As a child, she contracted smallpox and was left badly scarred and with poor eyesight.  Her parents and brother died in the smallpox epidemic. At the age of 20, Tekawitha was baptized and took the name Kateri, a Mohawk pronunciation of the name Catherine, after Saint Catherine of Siena.  Kateri Tekawitha died when she was 24 years old.  Witnesses reported that, after her death, her smallpox scars disappeared.

In 1884, Father Joseph Loyzance, pastor of Saint Joseph’s Church in Troy, New York purchased a piece of land at the former site of Ossernenon and established the Shrine of North American Martyrs in Auriesville.  Additional land, including the ravine where Father Jogues buried the body of René Goupil, was purchased in 1895.

Auriesville is on the south bank of the Mohawk River, about forty miles west of Albany, New York. It is about nine miles east of what archeologists believe to be the site of Osserneonon, the Mohawk village where the three Jesuit missionaries were martyred. It was destroyed in the 17th century and the site was abandoned.

In the nineteenth century, research on the part of Catholic historian John Gilmary Shea and Gen. J. S. Clarke of Auburn, who had studied Indian sites both in New York and Huron territory, led to their believing they had identified the former site of Ossersnenon, where Father Jogues and his companions died. Rev. Joseph Loyzance, a parish priest of St. Joseph’s, Troy, New York, had a lifelong interest in the lives of the early missionaries and supported honoring them at this site, which developed as Auriesville.

In 1884, Father Loyzance purchased ten acres of land on the hill where the village had been located, and erected a small shrine under the title of Our Lady of Martyrs. Father Loyzance subsequently led a pilgrimage of 4,000 people from Albany and Troy to the shrine. Other parishes later adopted the practice of visiting Auriesville during the summer.

In 1930, a coliseum was built at the shrine, overlooking the Mohawk Valley, as one of the first circular churches built in the United States. The Coliseum’s design allows for the seating of approximately 6000 worshipers for Holy Mass. Today the grounds of the Shrine cover some 600 acres (2.4 km).

The adage, “The blood of the martyrs is the seed of the church” has a literal meaning here.

During the 17th century, the Mohawks lived on the site of the Shrine in longhouses which were tunnel-like structures made of trees and bark. Extended families, identified by matriarchal lineage, lived together in the longhouses. They fished from the rivers, hunted deer, beaver, turkey and bear, and cultivated corn, squash, and beans.

The Mohawks were one of five tribes (later six tribes) that made up the Iroquois Confederacy that stretch from the Mohawk Valley in the east to the Seneca villages in the west, near present day Buffalo. This fierce alliance was formed to maintain peace among them, to defend against invading Europeans, and to war upon enemy tribes, particularly those in Canada.

European immigration to the Americas introduced a contentious fur trade. Huron and Algonquin tribes in Canada forged alliances with the French Catholics, and the Iroquois with the Dutch and British Protestants in New York. The natives quickly became dependent upon European goods such as firearms, metal pots, iron axes, and the scourge of alcohol. Competition over furs, which were needed to obtain these coveted goods, exacerbated the ongoing contentions among these tribes. They became enmeshed in the political disputes of European countries while attempting to defend their own territories against foreign encroachment.

Competition among tribes was most fierce between the Huron and Iroquois. Although the goal of the Jesuits was to save souls, they became an integral part the geo-political-religious turbulence of the time. 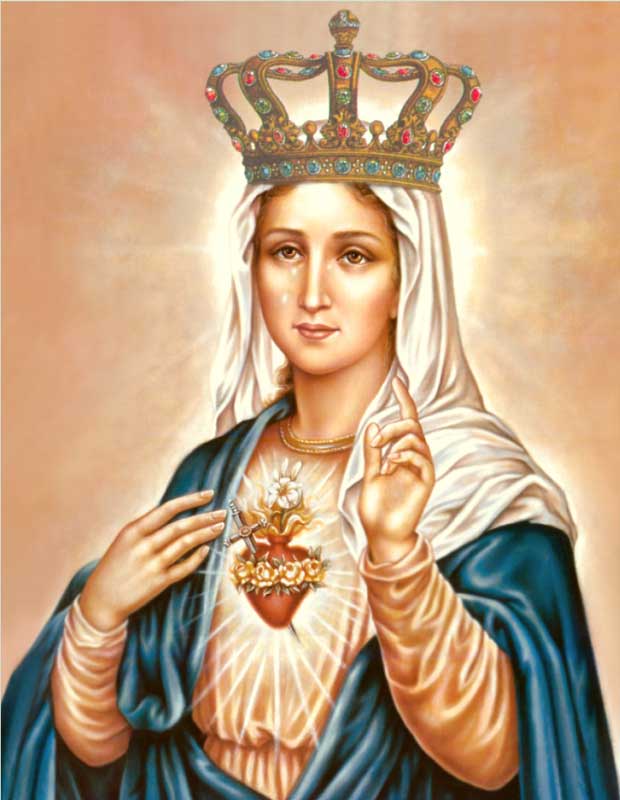 The Altar Stone of the Catholic Faith

The Shrine of Our Lady of Martyrs is the site of the 17th Century Mohawk village of Ossernenon where three Jesuit missionaries were killed during the 1640 for their faith. Father Isaac Jogues and two lay Jesuits, René Goupil and John Lalande, traveled from France to the New World to evangelize the indigenous peoples. They, along with five Jesuit priests martyred in Canada, were canonized as the eight North American Martyrs in 1930. They are the first and only martyred saints of North America.

St. Kateri Tekakwitha, a Mohawk, Algonquin maiden known for her purity and charity, was born here in 1656. Her life was a white martyrdom of persecution by the non-Christian members of her family and tribe. She died of natural causes in Canada in 1680 having remained steadfast in the Catholic faith and was canonized in 2012. Unlike the first Jesuit settlements in Canada, Ossernenon was initially not a mission. It was a place of captivity, torture, and finally one of negotiations, reconciliation, and mission. Father Jogues walked these grounds during three episodes over four years – the first time as a captive, the second as a peace ambassador, and the third as a missionary who met his martyrdom. 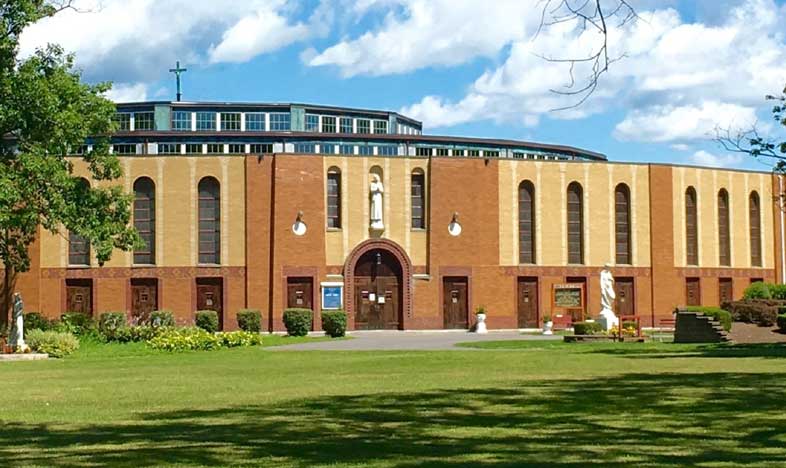 After the canonization of the North American Martyrs in 1930, a church capable of seating 6,500 and standing room for 3,500 was built and was called the Coliseum, after its resemblance to the Coliseum in Rome.  The round church was completed in 1931 and includes 4 altars in the center.

In addition to the Coliseum, the site of the National Shrine of North American Martyrs includes a number of chapels, shrines, and museums.  Stations of the Cross line the sides of the path down the ravine where René Goupil was buried and a Jesuit Cemetery is also located on the grounds.  The entire site is a natural reliquary since the ground holds the blood and bones of the saints who were martyred there. 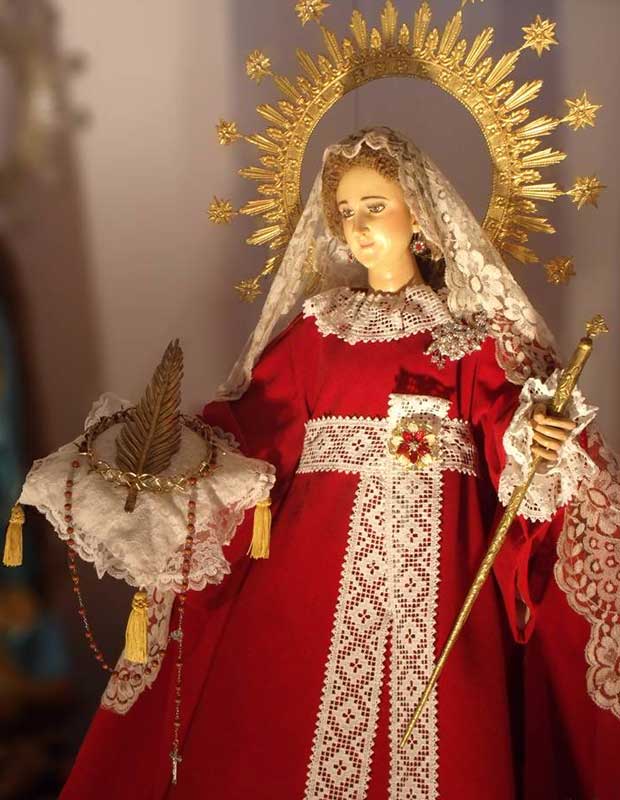 St. Kateri Tekakwitha, the beloved Mohawk, Algonquin maiden, was born at Ossernenon, Auriesville in 1656 as the first fruits of the martyrs’ sacrifice. Due to persecution after her baptism, she fled to Jesuit missions in Canada. There she lived a life prayer and penance, and heroic virtue and piety. She died there in 1680, and was canonized in 2012.

19th October is the Annual Feast Day of Martyrs.

The Feast of the North American Martyrs commemorates the lives of eight Jesuit missionaries who were martyred in what are now southern Ontario and upstate New York:

The Shrine’s gift shop and bookstore is situated in the Visitor Centre with a wonderful view of the Mohawk River and Valley.

It carry a variety of items including books, CDs, home goods, jewelry, rosaries, and statues.  Drinks and light refreshments are available for purchase.  Be sure to stop and say a prayer at the Chapel of Our Lady Undoer of Knots located in the front of the Visitor Center.

How to Reach the Shrine

Fulton County Airport is the nearby airport to the Shrine.

Schenectady Train Station in New York, United States is the nearby train station to the Shrine.