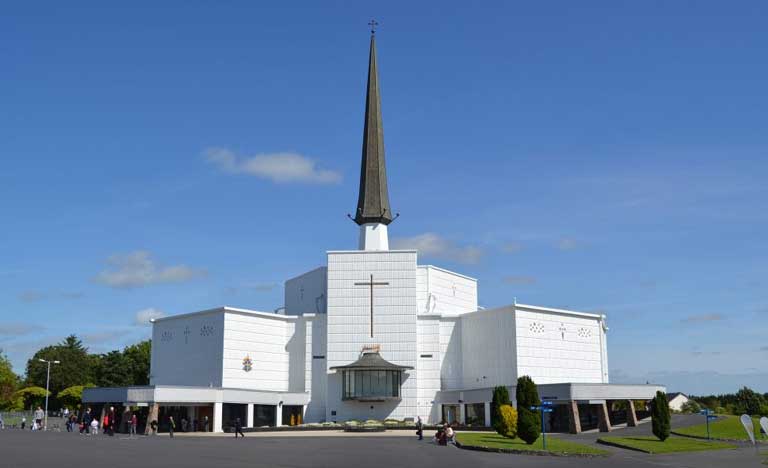 Knock – Ireland’s International Eucharistic and Marian Shrine. Since the Apparition on the 21st of August 1879, pilgrims and visitors have been welcomed to Knock Shrine. We offer a peaceful, contemplative space in which to pray and reflect. Here at Knock, we pray with you and for you.

The Story of Knock

On a wet dark August evening in 1879, the villagers of this place were in their small thatched cottages gathered around their turf fires from which they took warmth and light on such a terrible night. They had spent day doing the usual work of the harvest time of the year – gathering hay, bringing turf home from the bog. Suddenly word spread that something extraordinary was happening at the Church and so they hurried to the windswept gable where they witnessed a heavenly vision surrounded in a brilliant white light.

The witnesses clearly saw the Blessed Virgin Mary dressed in white robes, her hands and eyes turned towards heaven in prayer. On her head was a gold crown and where the crown fitted the brow, a single golden rose. On her right, bowed respectfully towards her, was St. Joseph. He appeared older, his beard and hair were grey and, like Our Lady, he was barefoot.

To Our Lady’s left stood John the Evangelist vested as a bishop, wearing a small mitre. He held an open book in his left hand and in its pages the lines and letters could clearly be seen. He appeared to be preaching but no voice was heard. He stood so that his back was neither turned to the Virgin or to the Lamb that stood upon a simple plain altar. Behind the Lamb was a Cross. They watched and prayed for over 2 hours and though they were wet, they noticed that no rain fell on upon the Apparition or on the gable. 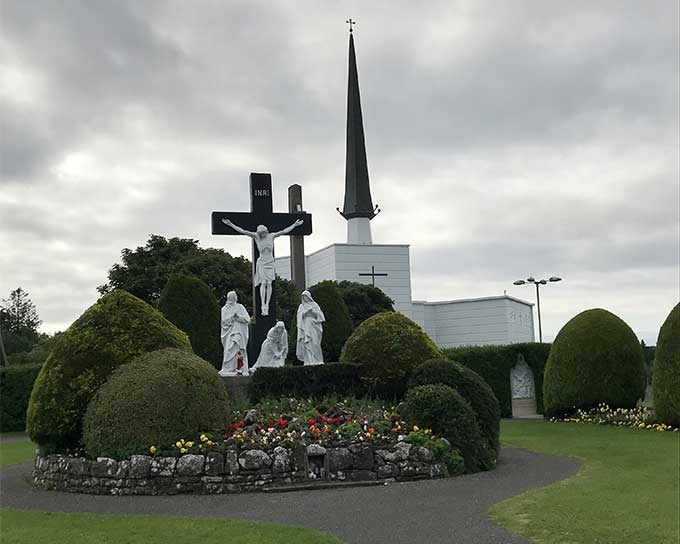 Saint Joseph was described as wearing white robes and standing at the Virgin’s right hand. His head was described as bent forward from the shoulders towards the Blessed Virgin. Saint John the Evangelist stood to the left of the Blessed Virgin. He was dressed in a long robe and wore a mitre. He was partly turned away from the other figures. Some witnesses reported that St. John appeared to be preaching and that he held open a large book in his left hand. Others did not. To the left of St. John some said there was an altar with a lamb on it with a cross standing on the altar behind the lamb.

Those who witnessed the apparition stood in the rain for up to two hours reciting the Rosary. When the apparition began there was good light, but although it then became dark, witnesses said they could still see the figures. They said the apparitions did not flicker or move in any way. The witnesses reported that the ground around the figures remained completely dry during the apparition although the wind was blowing from the south. Soon the entire apparition wall was torn apart by pilgrims chipping out the cement, mortar, and stones for souvenirs and to use for cures. 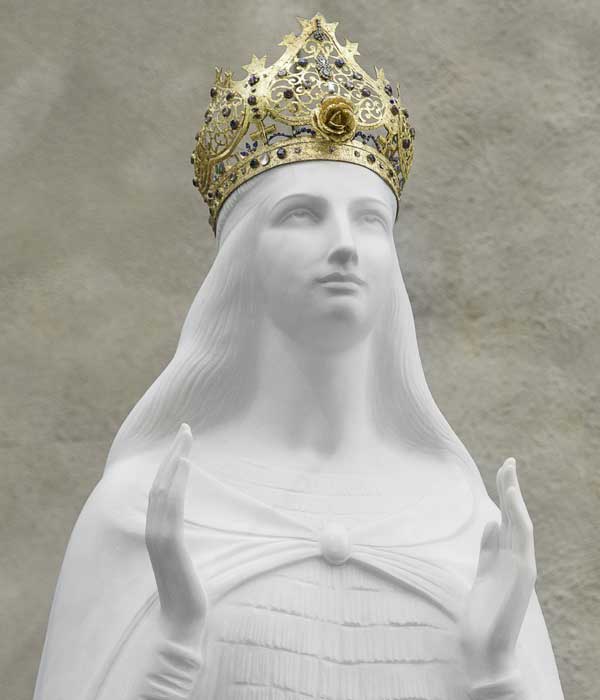 The evening of Thursday, 21 August 1879, was a very wet night. At about 8 o’clock it was raining as Mary Byrne, who was from the village, was going home with the priest’s housekeeper, Mary McLoughlin. Byrne stopped suddenly when she saw the gable of the church. She claimed she saw three life-size figures. She ran home to tell her parents and soon others from the village gathered. The witnesses said they saw an apparition of Our Lady, Saint Joseph and Saint John the Evangelist at the south gable end of the Church of Saint John the Baptist.

Behind them and a little to the left of Saint John was a plain altar. On the altar was a cross and a lamb, with angels. A farmer, about half a mile away from the scene, later described what he saw as a large globe of golden light above and around the gable, circular in appearance. For nearly two hours a group that fluctuated between two and perhaps as many as twenty-five stood or kneeled, gazing at the figures. It was raining.

The apparitions, for believing Catholics, held significant eschatological significance. Much work has been done to interpret the message received in the village by Catholic eschatological scholars such as Emmett O’Reagan. 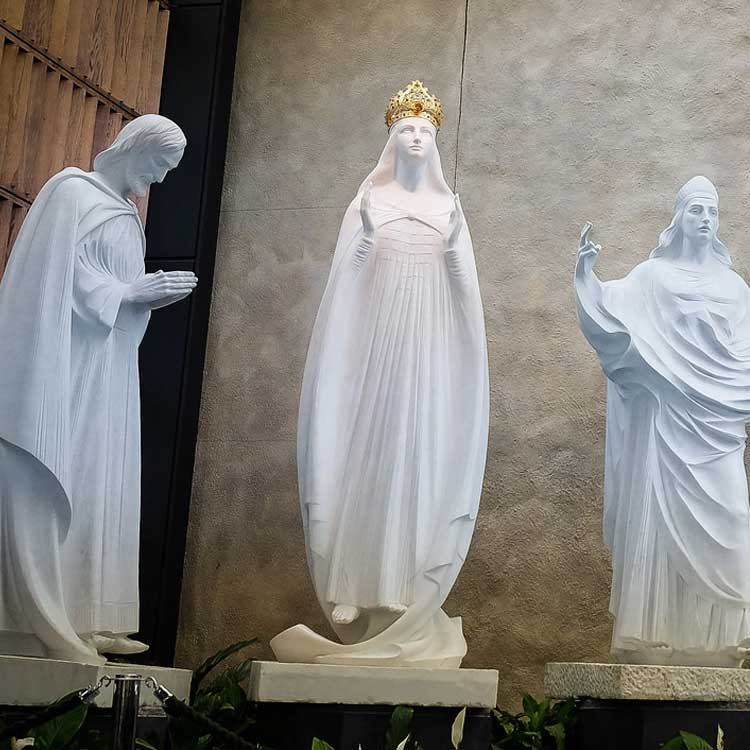 An ecclesiastical Commission of inquiry was established by the Archbishop of Tuam, Most Rev. Dr. John MacHale, on 8 October 1879. The Commission consisted of Irish scholar and historian, Canon Ulick Bourke, Canon James Waldron, as well as the parish priest of Ballyhaunis and Archdeacon Bartholomew Aloysius Cavanagh. Depositions of witnesses were taken in the ensuing months. The deliberations of the commission, referred only to the occurrence on 21 August 1879, which omitted “subsequent phenomena”, and as a result, there exists no official record for events that occurred after that date.

The evidence which was the commission’s duty to record, satisfied all the members and was deemed trustworthy. Among the considerations were whether the apparition emanated from natural causes, and whether there was any positive fraud. In the first cited particular, it was reported that no solution as from natural causes could be offered; and in the second consideration, that such a suggestion had never, even remotely, been entertained. The commission’s final verdict was that the testimony of all the witnesses taken as a whole was trustworthy and satisfactory.

The growth of railways and the appearance of local and national newspapers fuelled interest in the small Mayo village. Reports of “strange occurrences in a small Irish village” were featured almost immediately in the international media, notably The Times (of London).  Newspapers from as far away as Chicago sent reporters to cover the Knock phenomenon.

Canon Ulick Bourke joined Timothy Daniel Sullivan and Margaret Anna Cusack in developing Knock as a national Marian pilgrimage site. Knock pilgrimages combined traditional Irish practices like rounds of the church and all-night vigils with devotions like the stations of the cross, benediction, processions, and the recitation of litanies. Priests associated with the Fenian movement often led pilgrimages to Knock Shrine, Eucharistic and Marian Shrine, Ireland.

John White sees the silence of the apparition related to a cultural change occurring at that time. “It was necessary for Cavanagh to preach in English and Irish each Sunday as the schools saw to the replacement of Irish with English as the language of the young. This linguistic crisis may be connected with the silence of the Knock visions, as the oldest witness, Bridget Trench, had no English, while the youngest, six-year-old John Curry, was being educated with no Irish.” 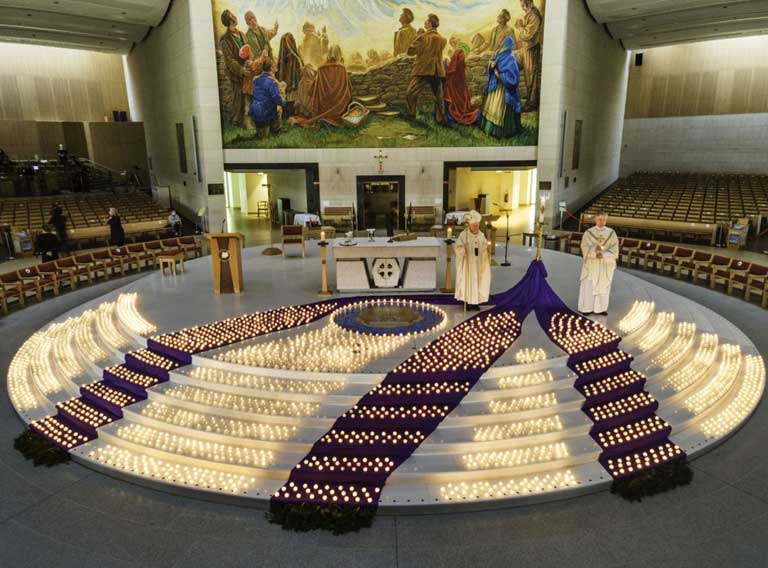 According to Joe Nickell, in addition to “serious discrepancies” in the witnesses’ accounts, it is possible for natural phenomena to account for the apparition. With the help of an astronomer who recreated the sky of the time via computer, it was determined that the evening sun was above the horizon for the duration of the event. There was also a school near the site with a wall angled toward the south gable of the church.

The suggestion is that the sun served as the light source, which reflected off the school’s windows (presumed to have been there) and produced a “natural version of a magic-lantern effect”. Nickell explains that “odd shapes could produce the requisite pareidolia effects in susceptible individuals, especially those who were motivated to see something “miraculous” and were familiar with similar holy pictures. 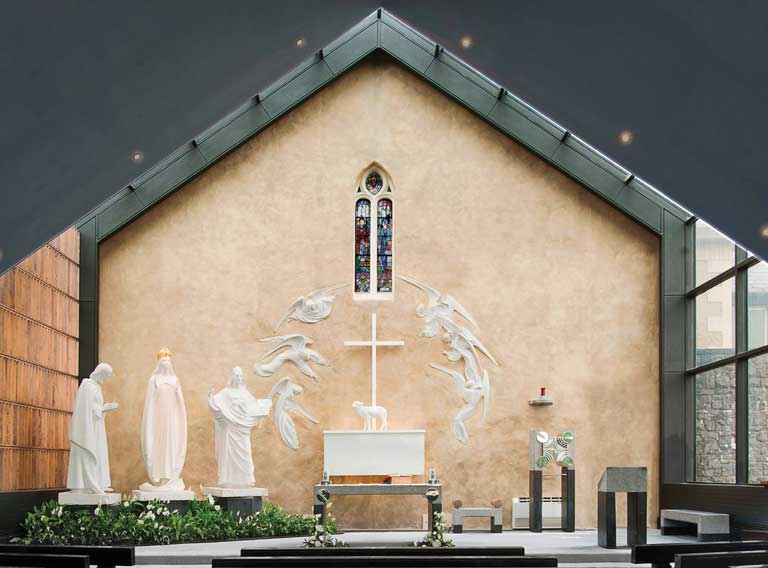 People who claim to have been cured at Knock still leave crutches and sticks at the spot where the apparition is believed to have occurred. Each Irish diocese makes an annual pilgrimage to the Marian Shrine and the nine-day Knock novena attracts pilgrims every August. The miracle is also known as Our Lady of Knock by the church.

On All Saints’ Day, 1945, Pope Pius XII blessed the banner of Knock from St Peter’s Basilica in Rome and decorated it with a special medal.

On Candlemas Day in 1960, Pope John XXIII presented a special candle to Knock.

On 6 June 1974, the foundation stone for the Basilica of Our Lady, Queen of Ireland, at Knock, was blessed by Pope Paul VI.

On 30 September 1979, Pope John Paul II visited the shrine to commemorate the centenary of the apparition. During that historic visit, the Pope addressed the sick and nursing staff, celebrated Mass, established the shrine church as a basilica, presented a candle and the Golden Rose to the shrine and knelt in prayer at the apparition wall.

On 26 August 2018 Pope Francis visited the Shrine at Knock as part of a visit to Ireland for the 9th World Meeting of Families.

While the original church still stands, a new Apparition chapel with statues of Our Lady, St Joseph, the Lamb and St John the Evangelist, has been built next to it. Knock Basilica is a separate building showing a tapestry of the apparition. 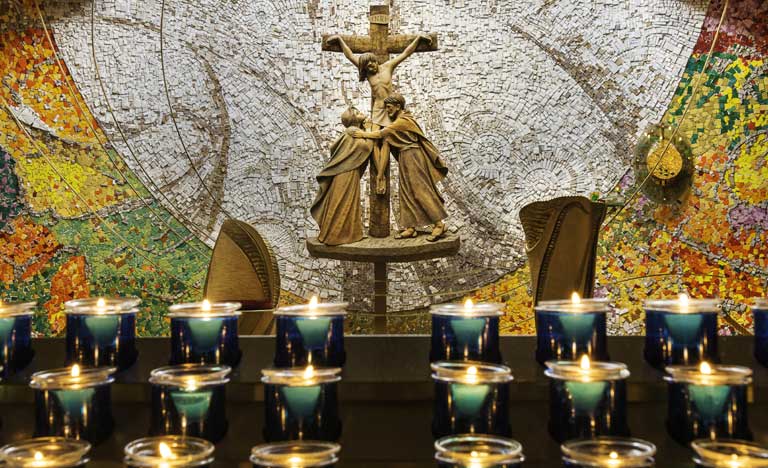 Mother Teresa of Kolkata visited the Shrine in June 1993.

Ireland’s National Eucharistic Congress was held at the Marian Shrine in Knock over 25 and 26 June in 2011. An estimated 13,000 pilgrims attended.

Though it remained for almost 100 years a major Irish pilgrimage site, Knock established itself as a world religious site in large measure during the last quarter of the twentieth century, largely due to the work of its longtime parish priest Monsignor James Horan. Horan presided over a major rebuilding of the site, with the provision of a new large Knock Basilica (the second in Ireland) alongside the old church. Horan secured from the Taoiseach (prime minister), Charles Haughey, millions of pounds of state aid to build an airport 19 kilometres away, near Charlestown.

On 13 May 2017, Cardinal Archbishop Timothy M. Dolan celebrated a requiem mass when John Curry, the youngest witness to the Knock apparition, was reinterred in St. Patrick’s Old Cathedral cemetery in Lower Manhattan after being disinterred from an unmarked grave on Long Island. 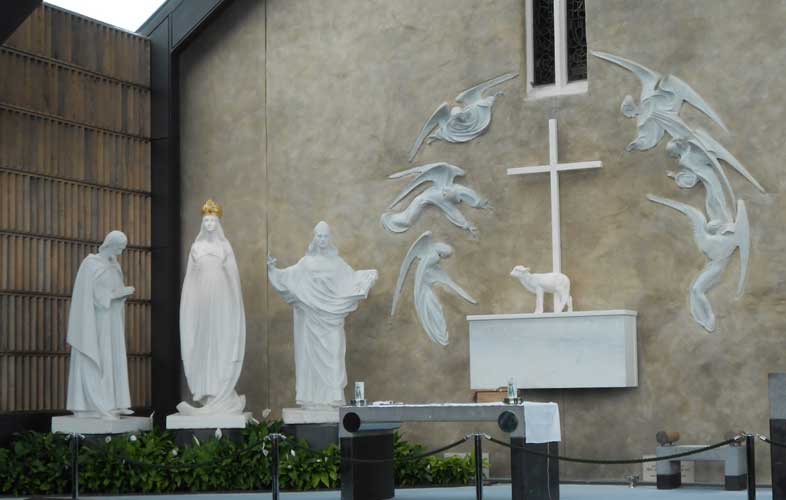 When you cross the threshold and enter Knock Shrine, you leave behind the worry and cares of a troubled world and join with your fellow visitors on a journey. Each person who comes to Knock has their own reason for making the journey, however long or short, to experience a unique and tranquil atmosphere.

Knock is a reminder of the faith that has been passed down through generations. Some come searching for answers and consolation, others to reflect and find peace. One thing that is guaranteed is that you will leave Knock Shrine feeling refreshed and renewed. There are no strangers here, only fellow pilgrims.

August 15th is feast of the Assumption of the Virgin Mary to heaven and, on average, more than 20,000 pilgrims visit Knock on that day.

How to Reach Knock Shrine

Ireland West Airport Knock is located 20 km from Knock Shrine with scheduled services from the UK and Europe.  A shuttle service operates from the Airport to Knock Village.

The nearest railway station is Claremorris (11 km), which is on the Dublin Heuston – Westport Line. For full information including timetables visit Irish Rail.

Directions to Knock Shrine (Knock) with public transportation. The following transit lines have routes that pass near Knock Shrine. By Bus: 440, 64.

Knock is 220 km from Dublin and 70 km from Galway. It is located on the N17 road, midway between Galway and Sligo.