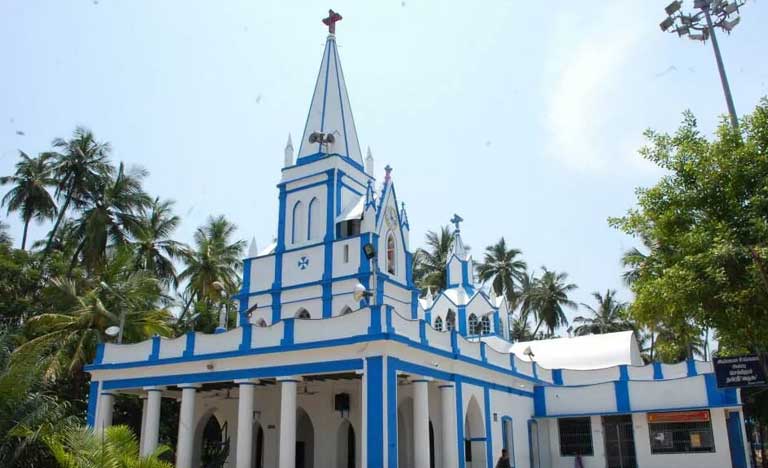 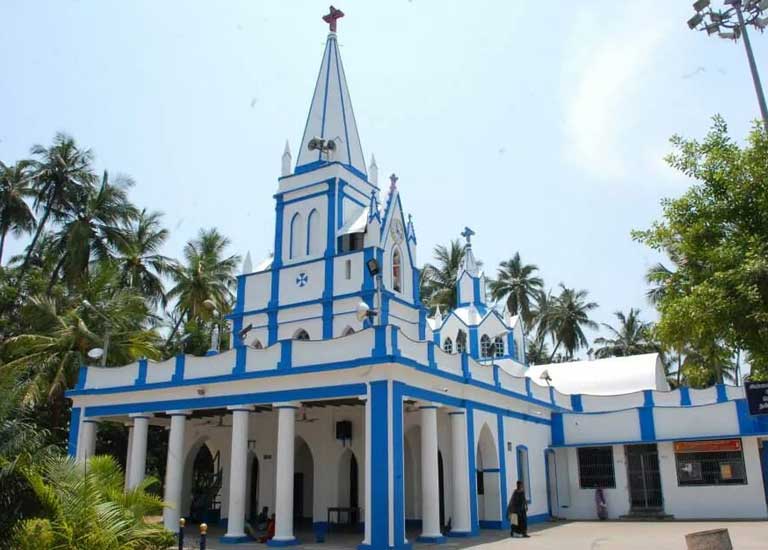 The venerated Marian image enshrined within received a Pontifical decree on 21 February 1886 from Pope Leo XIII to declare the site an official Shrine of Our Lady of Lourdes and to canonically crown the statue.

In 1867, the MEP missionaries in Puducherry wished to build a Chapel at Villianur which is 13 kilometers from Pondicherry, on the road to Villupuram. Hence they bought a piece of land at Villianur and Rev.Fr.Gou, then procurator of the Puducherry mission after a long negotiation with the Hindu temple authorities of Thirukameswarer Gogilambigai Temple started to build a Chapel at Kanuvapet on the outskirts of Villianur. It is said that the building of the church was sponsored by the thanksgiving offering of Dr.Lephine’s family for the miraculous cure of his daughter.

It took 10 years to complete the Chapel. And Rev.Fr.Tarbes a cousin brother of St. Bernadette, the visionary of Lourdes, was appointed as the Parish Priest of Villianur mission. Since he had a direct report of the apparitions of Our Lady of Lourdes, this chapel is the first in the world to be named after Our Lady of Lourdes outside Lourdes, France.

Our Lady of Lourdes Shrine, Villianur 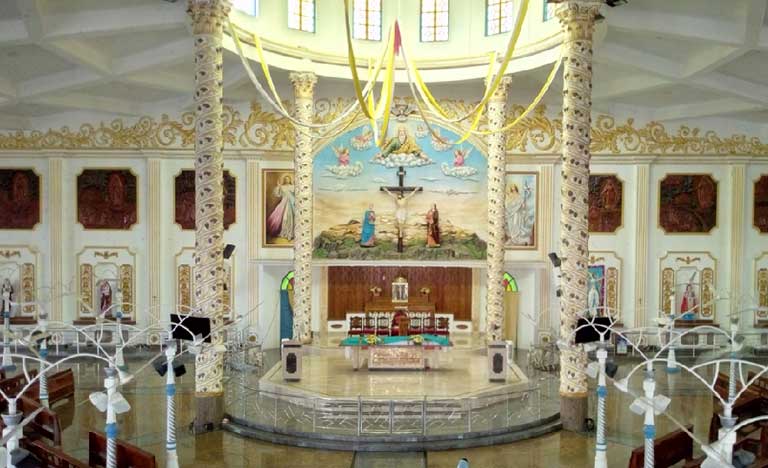 In 1867, the MEP missionaries of Pondicherry wished to build a Chapel at Villianur which is 13 Kilometers away from Pondicherry on the road to Villupuram. Hence the diocese has bought a piece of land at Villianur and Rev.Fr.Gou on, they procurator of the Pondicherry mission after a long negotiation with the Hindu temple authorities of Thirukameswarer Gogilambigai Temple.started to build a Chapel at Kanuvapet on the outskirts of Villianur, with the amount of the thanksgiving offering of Dr.Lephine’s family for the miraculous cure of his daughter in exchange.

It has taken atleast 10 years to complete the Chapel. And Rev.Fr.Tharbes a cousine brother of Bernadette, the visionary of Lourdes, was appointed as the Parish Priest of Villianur mission. Since he had a direct report of the apparitions of Our Lady of Lourdes And this seems to be the first in the world to be named after Our Lady of Lourdes outsid Lourdes, France. Added to that one pious Lady has paid for a statue of Our Lady of Lourdes and made it come from Lourdes under the direct supervision of Bernadette. It was on the 4th April 1877 the statue arrived at Pondicherry and was taken to the Cathedral after the three dangerous falls of the box containing the Holy Mother’s Statue.

To everybody’s amaze, the statue was intact and beautiful. And during the Statue’s stay at the Cathedral, a pious man called Thambusamy Mudaliyar, a native of Kumbakonam who was on his way to Chennai for the surgical intervention for the extra growth of flesh on his left eye, who I has prayed to Our Lady of Lourdes and was cured by a vision of Our Lady of Lourdes during a dream at the same night about 3 am This attracted a lot of crowd to the Cathedral and so the missionaries sent the statue soon to Villianur, on the 7th of April itself.

After some hurdles, Our Lady of Lourdes statue chose her own way to come to Villianur on the 7th April. From that time onwards people in thousands began to flock Villianur to have the vision of this statue and get cured of all their infirmities.

It was in 1885 the arch bishop Laouenan went to Rome and reported the numerous miracles that took place in this Shrine to the Holy Father and got permission on February 21st, 1886 to declare this as an official Shrine of Our Lady of Lourdes, Villianur and to crown the statue in his name.

On his return from Rome, on 8th May 1886 during a grand celebration, witnessed by around 40,000 people during the pontifical high mass the arch bishop crowned the miraculous statue in the name of the pope Leo XIII and declared this church as the Shrine of Our Lady of Lourdes, Villianur and attached permanent plenary indulgences to this shrine.

A parishioner of Our Lady of Lourdes commissioned a six foot tall statue for the site, which arrived in Puducherry on 4 April 1877. The box containing the statue was dropped three times on the way to the Cathedral, but arrived intact, and was sent on to Villianur.

The statue was claimed to be associated with a number of miracles in the late nineteenth century. In 1885 the archbishop Laouënan went to Rome and provided a report of the alleged miracles that took place at the shrine to Pope Leo XIII. The archbishop received permission on 21 February 1886 to declare the site an official Shrine of Our Lady of Lourdes, and to canonically crown the statue.

Historical Milestones in the Shrine 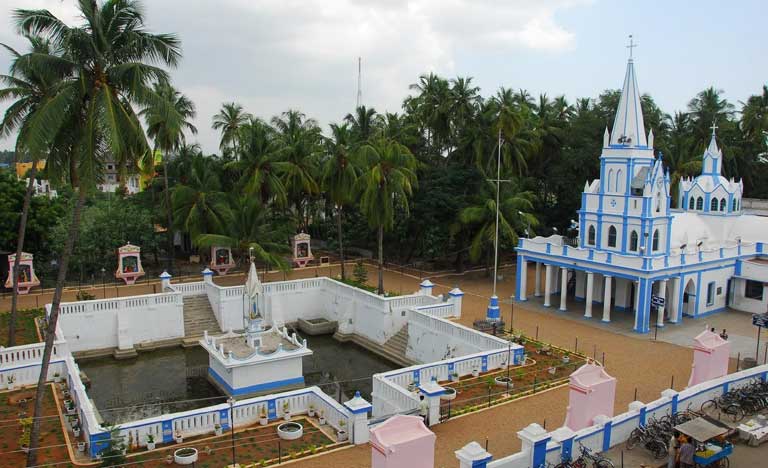 There was a natural pond in front of the chapel. it was once used as the water reservoir for the irrigation of the lands around and water came from the big Ousteri Lake which is 10 km away from here. And this pond was constructed by Fr. Lesbond, the Parish Priest, with donations from Zigon organized by Mr. Lesage. Mr. Larocgue from the people in Zigon got a statue from Lourdes and in 1924 and a solemn ceremony took place to install the statue in the middle of the sacred pond after the due consecration of the statue and the pond.

It is believed by the people here that the pond water is miracles and has the ability to cure the sick and bring good fortune. This is the only Catholic church in Asia having a sacred pond in front of the church.

19 years after Lourdes apparitions, the first church and grotto for Our Lady of Lourdes was constructed in 1877. The centenary celebrations was celebrated on 10 September 1977. As a remembrance of the centenary celebrations, Rev.Fr.Duissen built a big grotto in the garden of the church, which was consecrated by bishop Venmani S. Selvanather on 10 October 1978. The grotto which was inside the church was modified according as per the instruction of the Second Vatican Council.

As the existing Church could not accommodate the growing number of pilgrims, a new Church is planned with the approval of our Archbishop Most. Rev. Dr. Antony Anandarayar.  On 10 September 2011, Rev. Fr. A. Arulanandam, the Vicar General of Archdiocese blessed and officially commenced the construction work for the Church. Rev. Fr. C. Joseph Arumaiselvam, the procurator and many other priests were present at the event. Construction was completed in 2015.

Stations Of The Cross

In 2009, The Stations of the Cross were constructed around the ‘Sacred Pond’.

In 8 October 2011, on the 125th anniversary of the crowning of the statue by the Pope, Archbishop Monsigneur Antony Anandarayar crowned the Statue again with a genuine diamond crown donated by its devotees.

The Holy Water from Lourdes

Every first Saturday in the month of August, The Holy Water from Lourdes Church, France is poured into the ‘Sacred Pond’ at Villianur Shrine. This event is attended by thousands of devotees every year.

As a sign of gratitude to Our Lady of Villianur, for saving the city from a cyclone, the first pilgrimage on foot (12 Km.) took place on October 10, 1977 from Pondicherry and this beautiful tradition is still continued on the II Saturday in the month of October.

Annual feast of Our Lady of Lourdes shrine commence with the nine days of Novena and flag hoisting on the 6th day after Easter Sunday. The car procession is done during these days. The Annual Feast day will be celebrated on the 15th day after Easter. This is a Puducherry state Christian festival.

Our Lady of Lourdes Shrine, Villianur, Pondicherry, India is well connected with Bus Station, Railway Station and Airport facilities rest of the country.

Puducherry Airport, Puducherry which is (11.4 Kms) from Our Lady of Lourdes Shrine, Villianur.

The nearest is Villianur Bus Stand which is less than 1 Km and Puducherry Main Bus Station (8.3 Kms) from Our Lady of Lourdes Shrine, Villianur.