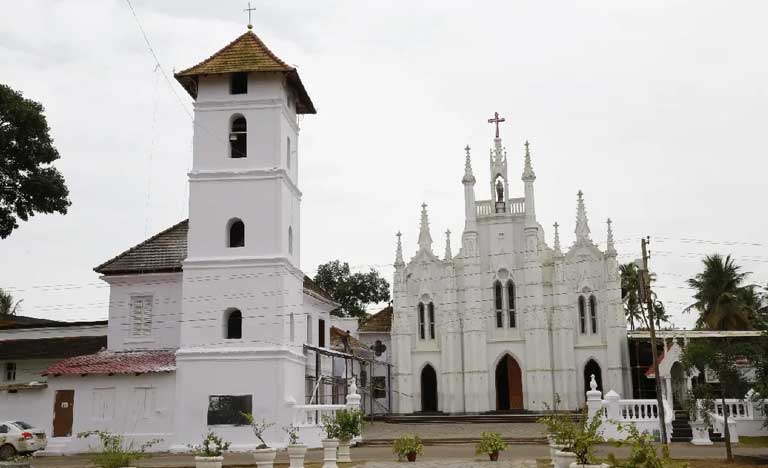 Basilica of Our lady of Mount Carmel & St Joseph, Varapuzha, Ernakulam, Kerala, India which is popularly known as Varapuzha Basilica Church is a place with historical value and importance. The basilica is dedicated to Our Lady of Mount Carmel and St Joseph. The basilica is also famous as a pilgrimage centre in the southern part of India. It serves as the Mother Church for 14 churches.

This Church was the seat of the Metropolitans until 1904. The headquarters was then shifted to the town of Ernakulam, for easier administration. As the original seat of the Latin Bishop, the church holds a unique place in the history of Latin Catholics in the area. Presently the church offers solace to the faithful who gather there for the powerful intercessions of Our Lady and St. Joseph.

Famous Marian Shrine Established in 1673, this had been the seat of the Metropolitans till 1904. The headquarters was then shifted to the town of Ernakulam hence, for easier administration. As the original seat of the Latin Bishop, this Basilica holds a unique place in the history of Latin Catholics in the area. Presently the Basilica offers solace to the faithful who gather there for the powerful intercessions of Our Lady of Mount Carmel and St. Joseph.

Varapuzha is in the periphery of the city of Kochi, which belongs to the Indian state of Kerala. Our presence there dates to the year 1673 and the community is formed currently by five brothers. The first Carmelite missionaries who arrived there called Varapuzha “the little Rome of the Orient.”

The patron saint of the parish is St. Joseph. The “Carmelite Welfare Center,” founded on August 15, 1974, is attached to the parish. This social assistance center serves women from poor families in the region. Since its foundation, the CWC has supported an enormous number of families offering work and stable salaries to women who are received by the center and who work in sewing.

At this time as we congratulate the Manjummel Province, we also pray for the presence of Teresian Carmel in India and we hope that this declaration will be spiritually fruitful. 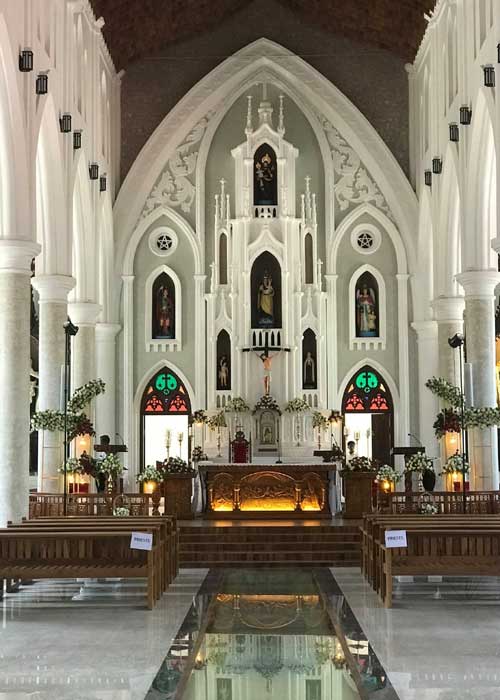 1653 Fr. Mathew of St. Joseph reached Goa as a missionary The old Varapuzha Church was built in 1673.

On 20 February 1700 Pope Clement appointed Carmelite Missionary Fr. Angelus Francis as the Vicar Apostolic Malabar. All those who guided the life and activities of the Church from 1700 AD to 1886 AD were known as “Vicar Apostolics”. On 13 March 1709 the Holy See suppressed the Malabar Vicariate and the Varapuzha Vicariate was erected officially. 1886 the Varapuzha Vicariate was raised to the Status of the Archdiocese. Till 1904 Varapuzha was the official residence of the Archbishops of Varapuzha. From 1886 onwards the bishops took charge and care of the diocese of Varapuzha from this place named “Varapuzha”.

On 1 September 1886 the Varapuzha Vicariate was officially raised to the Status of the Archdiocese and Rev. Dr. Leonardo Mellano OCD was consecrated as the first Archbishop of the archdiocese of Varapuzha. In those years the Varapuzha Church was the only Catholic Church of this locality. At that time this was the home to all the Syrian Catholics of this locality.

The famous Carmelite Missionary Fr. Paulinus (missionary from 1744-1780) in his famous book “India Orientalis Christiana” describes this Church as the “Church of Latin and Chaldean rites”.

This Church has two Patron saints; Our Lady of Mount Carmel and St. Joseph, the latter resulted from the special devotion of its founder Fr. Mathew of St. Joseph. The old Church underwent a major uplift and reconstruction in 1927 when its old front doom collapsed in 1919.

When Tipu Sultan (1750-1799) the notorious Muslim Conqueror attacked, plundered and killed many, Varapuzha was providentially left out being an island, but it became the place of refuge for all from all religions and castes. The Carmelite missionaries took care of all of them.

In 1682 the Carmelite Missionaries of Varapuzha requested the Propaganda Fidei for the construction of a Seminary for the formation of the Indigenous Clergy. In 1685 the Seminary was closed down. A new Seminary was built in 1766 in Varapuzha. At that time it accepted candidates from both Latin and Syrian rites. In 1790 this seminary was closed following the attack of Tipu Sultan, the Muslim conqueror. The Seminary was reopened in 1832. In 1866 the Syrians were shifted to the Puthenpally Seminary. From 1659 to 1904, sixteen Bishops and two Archbishops guided the diocese from this place. In those days all travels and transportation were through water.

In a letter dated December 11, 2020, the office of the Congregation for Divine Worship and the Discipline of the Sacraments approved the application of the archdiocese of Verapoly to elevate the status of the former cathedral of Varapuzha to a minor basilica. As a minor basilica, it will be one of only 28 nationwide and 10th in Kerala, and the first one in the country to be named after St Joseph

Salve statue of Our Lady of Mount Carmel 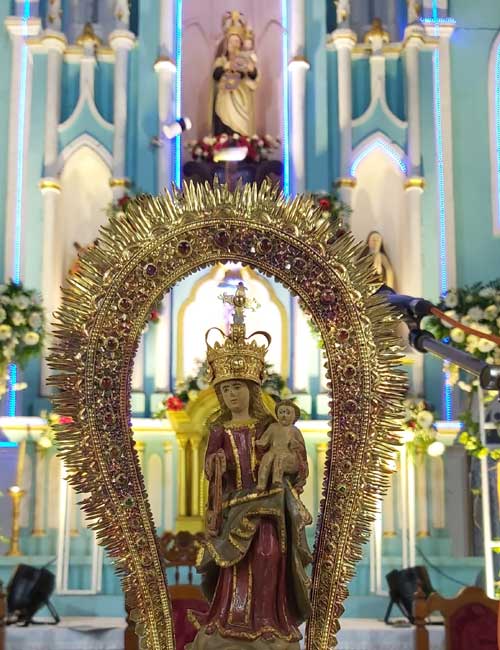 The official Coat of Arms of Varapuzha Basilica

One of the privileges of receiving the honor of Basilica status is the right to have a Coat-of-Arms. The coats of arms are traditionally shown with an image of the papal tiara and the keys of Peter as an external ornament of the escutcheon. The tiara is usually set above the escutcheon, while the keys are in saltire, passing behind it (formerly also en cimier, below the tiara and above the shield). In modern times, the dexter and sinister keys are usually shown in gold (or) and silver (argent), respectively, and these Keys represent the papacy.

In the center of the seal is Mount Carmel, the cradle of the order, its tip reaching to the sky. It refers to Mount Carmel, the Carmelite’s place of origin in Haifa, Israel. In the 9th Century BC, the prophet Elijah lived and had a profound experience of God there. In that same place in the early 12th Century some hermits, inspired by the memory of Elijah, gathered there, with a desire “ to live a life of allegiance to Jesus Christ” (Carmelite Rule). The cross on the summit of the mountain was added in the 16th Century as a distinctive mark of the Discalced Carmelites. On the seal there are also three, six-pointed stars which represent the three great epochs in the history of Carmel; the first, or prophetic era, represented by the star inside the mountain, dates from the time of the prophet Elijah to the time of St. John the Baptist: the second, or Greek epoch, when the order spread throughout the east and west, from the time of St. John to the time of Berthold, the first Latin General; and the third, from Berthold to the end of time. Another meaning of the stars is that they stand as a remembrance to the members of the Carmelite order. The star inside the mountain represents the Carmelites who are still on their way to the summit of Mount Carmel (heaven), the other two stars in the sky represent all the Carmelites who have gone before us and have reached the goal of their life’s vocation; union with God in love in the eternal joy of heaven.

The Scapular and flower Lilly represents titular patrons of the Basilica, Our lady of Mount Carmel, and St Joseph Respectively.

The basilica is dedicated to Our Lady of Mount Carmel and St Joseph. The solemnity of the Assumption of Our Lady is celebrated as an annual sixteen-day confraternity festival, from 31 July to 15 August. Annual Feast will be celebrated on 15th August.

Basilica of Our Lady of Mount Carmel and St. Joseph, Varapuzha, Kerala, India is well connected with Bus Station, Railway Station and Airport facilities rest of the country.

Cochin International Airport, Kerala which is (26.1 Kms) from Basilica of Our Lady of Mount Carmel and St. Joseph, Varapuzha.

The nearest railway station is Varapuzha Junction which is just (2.4 Kms) from Basilica of Our Lady of Mount Carmel and St. Joseph, Varapuzha.

The nearest is Varapuzha, Town Bus Stand which is (1.6 Kms) from Basilica of Our Lady of Mount Carmel and St. Joseph, Varapuzha.