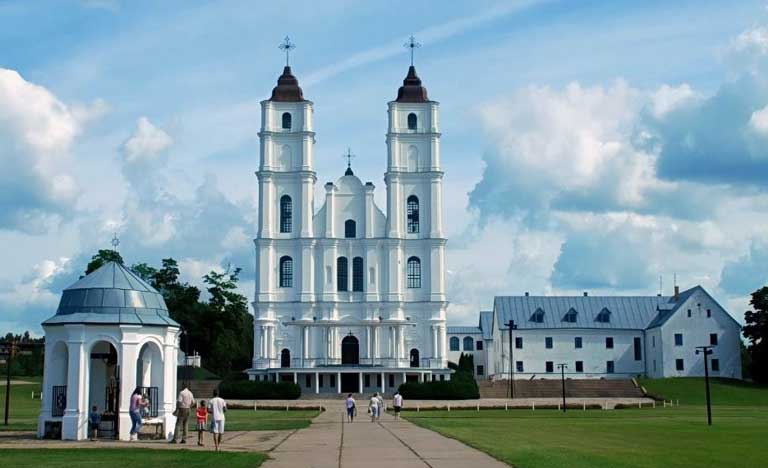 The Basilica of the Assumption, Aglona

The Basilica of the Assumption in Aglona, Latvia is one of the most important Catholic spiritual centers in Latvia. Every year thousands of pilgrims flock to the Basilica on the day of the Assumption of the Blessed Virgin Mary on 15 August. It is one of the eight international shrines recognized by the Holy See and its religious events were attended by around 300,000 pilgrims.

It’s also one of the most important pilgrimage spots in north-eastern Europe. Few people today know that the place of this highly venerated religious site was once extremely important to pagans as a place known for its healing powers. Many centuries ago, Baltic tribes called this area home.

But it was the events of 1236 that really made Aglona both famous and infamous, when King Mindaugas of Lithuania, along with his two sons, were murdered and buried here. In 1688, a prior from Vilnius came to Aglona and built a church and monastery. Firstly, a wooden church arose in 1699, and the following year Dominican fathers constructed a monastery.

The Basilica of the Assumption, Aglona has the distinction of being an International Shrine, one of only about 100 in the world.

In 1989, pilgrims walked to Aglona from Riga, the first time this has happened in five decades. And the same year, a sacral square arose in front of the basilica for large public services, including the eagerly anticipated visit of Pope John Paul II in September 1993. In 1995, Aglona basilica officially became a sacred national treasure as the country’s parliament passed a new decree “The Sacred Site of National Importance in Aglona”. 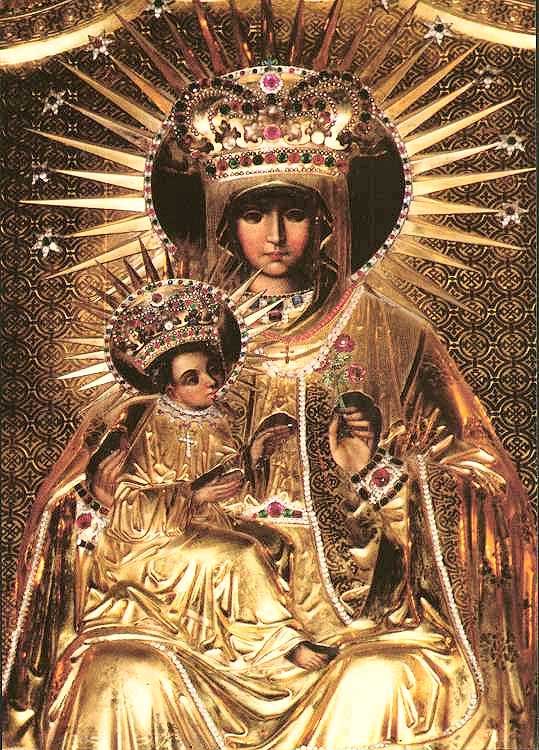 A collection of paintings, sculptures and other artwork kept in the church includes a 17th century icon, “Our Miraculous Lady of Aglona”, which is only unveiled to the public during religious celebrations. The icon is believed to have miraculous powers of healing.

There are many legends about miracles of Aglona. One of them has that peasant Kristaps Mateisāns from Spīku village was once taking his child to Aglona for christening. A fierce storm blew up as he was rowing his boat across Lake Cirisu and it rocked violently in the choppy waters. The peasant, struggling to navigate his boat, did not notice his child overboard. When he realized the tragedy, he cried out to the Lady of Aglona, and miraculously, his child emerged from the water near the shore, rescued by people on the lakeside.

History of The Basilica of the Assumption, Aglona 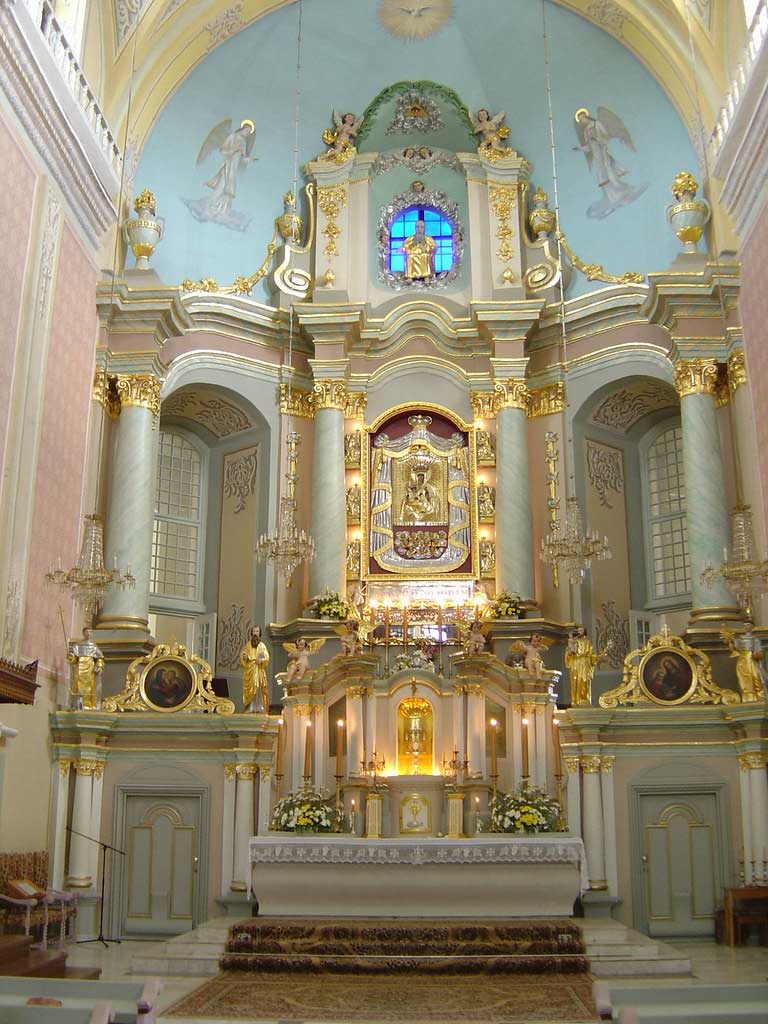 The Basilica of the Assumption, Aglona, Latvia is one of the most important Catholic spiritual centers in Latvia. The basilica a is the major Roman Catholic shrine of Latvia. Aglona Basilica, built in the late Baroque style, boasts two approximately 60-meter-high towers. Inside the church, there are groin vaults, arcs and columns featuring rich Rococo style adornments. The church’s furbishing is from the 18th century and its bye-altars have been built in the early 19th century.

According to the latest data, Aglona has been known as one of the centers populated by Baltic tribes already since 1800 – 500 B.C. History sources suggest that for the Baltic tribe of Latgallians made it a place of worship ages ago. The first recorded mention of Aglona as a Christian center dates back to 1263 when Lithuanian King Mindaugas and his two sons, Ruklys and Rupeikis, were tragically killed in Aglona.

The Origins of the Monastery

In 1697, local Polish noblewoman Jeta-Justina Sastodicka, supported by Livonian Bishop Mikolaj Poplawski, invited Dominicans from Vilnius to establish a monastery and school in Aglona. To put the plan into practice, the Sastodicki couple contributed 17 villages with 90 homesteads – “For God’s glory and the blessing of Latvians”. Father Remigius Mosokowsky, the prior of the Vilnius Dominican Monastery, arrived in Aglona in 1688 to choose the place for building the new monastery and church.

Construction of the Monastery and Church 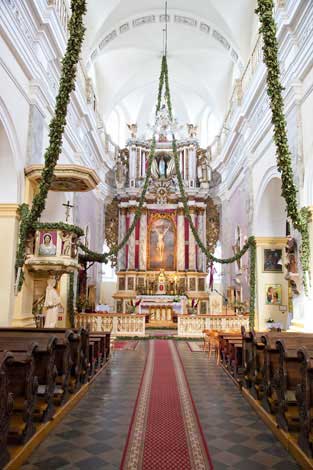 In the late 17th century, the Dominican Order established its monastery and built the first church in Aglona. After the church, which was completed in 1699, burned to the ground, a stone monastery building and the current church were constructed from 1768 to 1780. The church’s interior was created in the 18th-19th centuries, and the organ and confessional were made in the late 18th century.

Pilgrims come to Aglona every year on August 15 to celebrate the day of the Assumption of the Virgin Mary into Heaven. It is one of the most well-known sacred sites in the world. Groined vaults, arches and columns splendidly decorated in rococo style can be found inside. The Dominican order founded a monastery and built the first wooden church in Aglona in the 17th century. When in 1699 the wooden church burned down, the stone building of a monastery and the present temple was built on its place in 1768 – 1780. The interior finish of the church was created in the 18th – 19th century, but the pulpit and the organ – at the close of the 18th century.

The Dominicans (“white fathers”) built the first wooden church together with the monastery in 1700. The monks placed the Holy Mother’s icon (brought by them from Vilnius) in the church, prayed in front of it, and called on all the believers to do the same. Owing to a number of recovery instances the first pilgrimages to Aglona started. The white fathers initiated the construction of a baroque style stone church and monastery in 1768, in 1780 they finished the building process and consecrated the new buildings.

As the Russian Empire prohibited the affiliation of new candidates to the monastery, the last of the white fathers died at the end of the 19th century, and ordinary diocesan priests began to serve Aglona. In 1920 the first bishop of Latvian origin A. Springovičs was consecrated in Aglona; he was the one who selected Aglona church to be the renewed Riga Archbishopric cathedral.

Right after that Theological Seminary was opened in the monastery, and after a year – Aglona Catholic Gymnasium. The quantity of pilgrims increased even more, then Aglona was called the Catholic centre of Latvia. In 1980 the Pope gave Aglona church the title of the “minor basilica” (“basilica minoris”). It is the only one in Latvia. The Pope of Rome John Paul II arrived to Aglona as a pilgrim on September 9, 1993. In 1995 the parliament of the Republic of Latvia passed the law “The Sacred Site of National Importance in Aglona”.

Like most of the Baltic states, Latvia came under Russian and then German occupation during World War II, followed by Soviet Rule from 1945-1981, when it finally re-gained its independence. Thousands of civilians were murdered or sent to concentration camps during these periods. The predominant religion is Lutheran, with a sizable Roman Catholic minority in the Southeast part of the country, which is where you will find the city of Aglona. 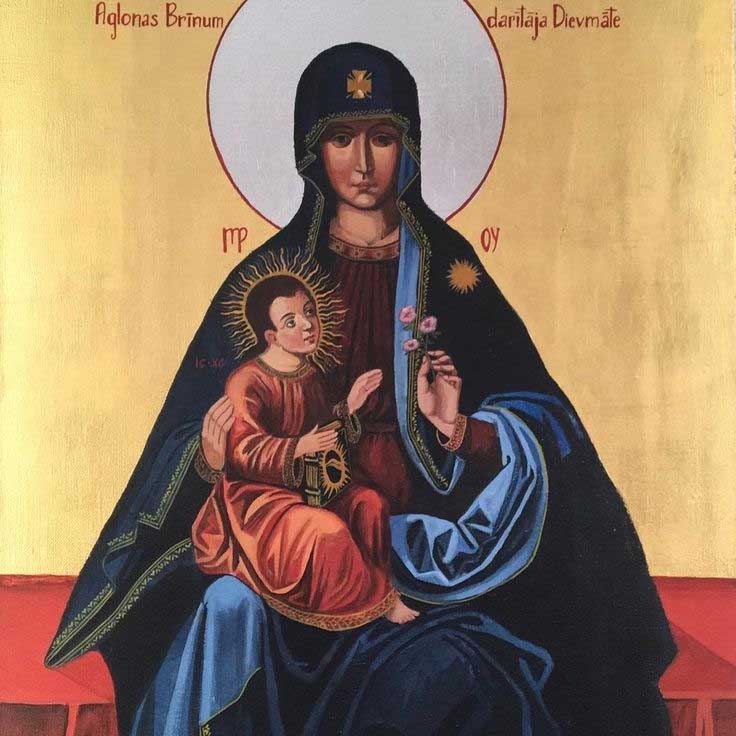 Marking the 200th anniversary of the Basilica of the Assumption, Aglona in 1980, Pope John Paul II granted it the title of Basilica minoris, or ‘small basilica’.  Aglona Basilica is the only bearer of this title in Latvia.

Basilica of the Assumption of Aglona was built in the late Baroque style, and it is decorated with two 60-meter-high (200 ft) towers. Inside, there are cross vaults (groin vaults), arches, columns and it is decorated with rococo ornaments. The church’s furbishing is from the 18th century and its bye-altars have been built in the early 19th century. Every year on the 15th of August, pilgrims come to celebrate the Virgin Mary’s Assumption day.

The Church kept the painting, sculpture and art values, including the icon of “Our Lady of Aglona’s Miracle”. It is believed that the painting has a healing ability. From 2011 to 2013 diocesan bishop John Bulis coordinated a Basilica’s restoration work. It had pitch roofing, sheet metal cover being replaced with copper and renovation works from Basilica and convent.

The basilica was carried out in a complete change of wall color, retaining the Baroque and Rococo styles, but changing the colors and patterns on the walls. The altar’s large columns and cornices evolved from blue-green marble imitation of the little pink reddish, thus the whole altar become much “warmer”. In contrast, the rest of the wall painting in the Basilica of the pitch line of decorative elements are pale yellow and pink colors of marble imitation celadon. All Basilica’s decorative paint is a lot more marble imitation than it was before. It lost a few pictures of the saints and Christian symbols such as the dove (as a symbol of the Holy Spirit), the Lamb of God symbol, etc.

Divine healing properties are attributed to the water running from a spring on the shore of Lake Egle near the basilica.

In preparation for the historic visit of Pope John Paul II to Latvia in the 1990s, a square was created in front of the basilica for processions and major church services drawing large crowds of people. The square has been created as a sacred enclosed area and a part of the basilica’s architectural ensemble.

Fire destroyed the original buildings in the 1760s. To replace them, an abbey and a giant white Italian baroque-style basilica arose between 1768 and 1800. Aglona quickly became the center of Catholicism in Latgale as well as some areas of what is now modern-day Lithuania. In 1800 Bishop Benislavski consecrated the basilica.

Either through divine intervention or in the knowledge of early pagan stories about the mysterious healing powers of the water flowing from a spring in the settlement, the resident Dominican fathers sent water samples from the spring to St Petersburg State Medical Academy in 1824. Scientists and doctors concluded that Aglona’s waters did indeed have healing properties and not long afterward a small hospital for a dozen patients arose close to the spring.

The Feast of the Assumption on August 15 attracts tens of thousands of people from Latvia, Lithuania, Poland, Belarus, Russia, and beyond. Pentecost is the second most popular time to visit. The church has an extensive and impressive collection of paintings, sculptures, and artistic treasures. But of greatest interest to most visitors here is the historic icon of the Aglona Mother of God. It’s hidden inside an oak frame placed on the main altar.

Every year thousands of pilgrims flock to the Basilica on the day of the Assumption of the Blessed Virgin Mary on 15 August. It is one of the eight international shrines recognized by the Holy See and its religious events were attended by around 300,000 pilgrims.

How to Reach The Basilica