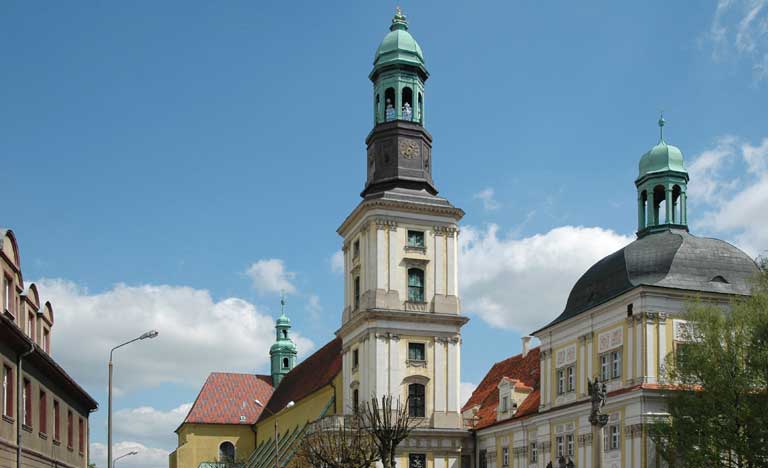 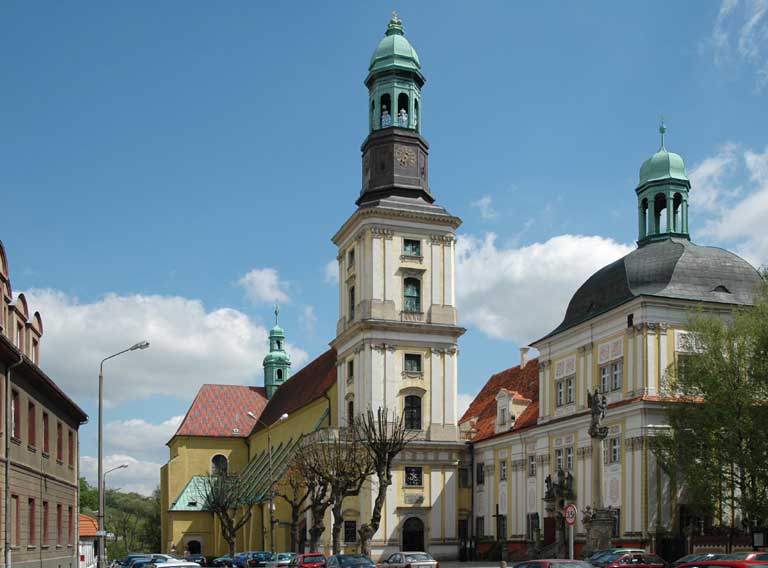 Trzebnica is located approx. 25 km north of the regional capital Wrocław in the Lower Silesian County. Trzebnica is a district town and thus the seat of the district government as well as the municipal council, which includes the city and 41 villages. The city also has a court and a district prosecutor. The city is a destination for Catholic pilgrims visiting Saint Jadwiga’s Sanctuary.

On the hill Winna Góra near Trzebnica, the oldest traces of Poland have been found of early human presence. The archaeologists have determined that here for approx. 500,000 years ago there was a hunter and gatherer culture inhabited by one of human ancestors: Homo erectus. Testimony of this can be seen at the regional museum in Trzebnica.

In Trzebnica was born in 1703 Maria Leszczyńska, daughter of the Polish king Stanisław Leszczyński and Katarzyna Opalińska; she died in 1768 in Versailles as Queen of France, married to King Louis XV. 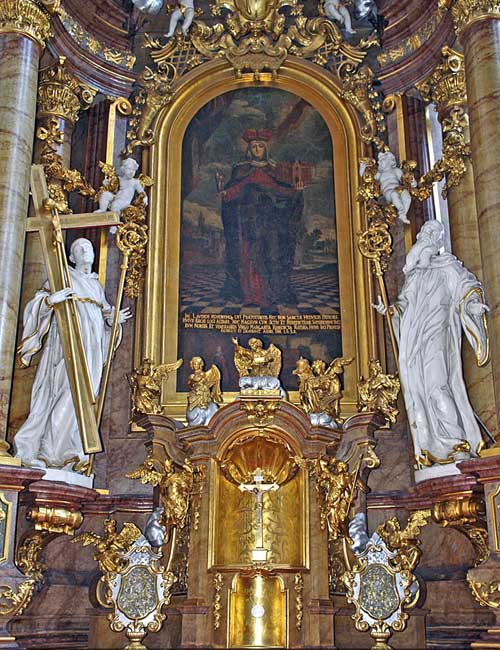 The abbey was established by the Silesian Piast Duke Henry I the Bearded and his wife Saint Hedwig of Andechs , confirmed by Pope Innocent III. The legend of its foundation relates that once Duke Henry when out hunting fell into a swamp from which he could not extricate himself. In return for the rescue from this perilous position, he vowed to build the abbey. With Hedwig’s consent, her brother Ekbert of Andechs, then Bishop of Bamberg, chose the first nuns that occupied the convent. The first abbess was Petrussa from Kitzingen Abbey; she was followed by Gertrude, the daughter of Hedwig. The abbey was richly endowed with lands by Duke Henry. When Hedwig became a widow in 1238, she went to live at Trzebnica and was buried there.

The church, a basilica with pillars in the late Romanesque style, to which Baroque additions were made from 1741. It features several paintings with scenes from the life of St. Hedwig by Michael Willmann. After the secularisation of the abbey, it became the Trebnitz parish church.

The grave of St. Hedwig is located in a chapel to the right of the high altar, donated by her grandson Archbishop Ladislaus of Salzburg in 1267. The grave of Duke Henry I, her husband, is in front of the altar. 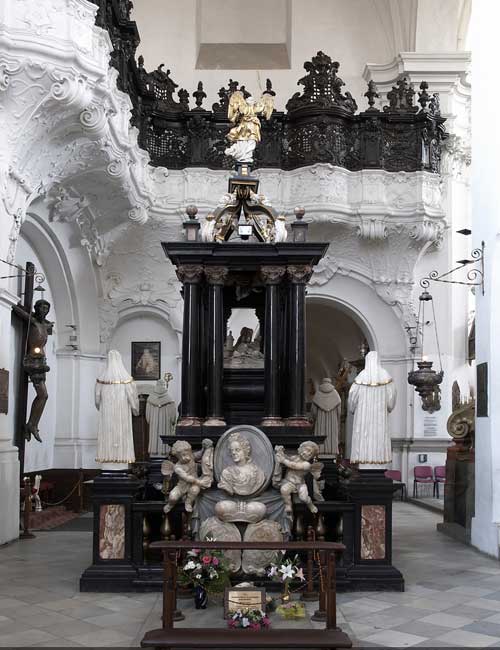 The abbey was established by the Silesian Piast Duke Henry I the Bearded and his wife Saint Hedwig of Andechs (Polish: Święta Jadwiga Śląska), confirmed by Pope Innocent III. The legend of its foundation relates that once Duke Henry when out hunting fell into a swamp from which he could not extricate himself. In return for the rescue from this perilous position, he vowed to build the abbey. With Hedwig’s consent, her brother Ekbert of Andechs, then Bishop of Bamberg, chose the first nuns that occupied the convent. The first abbess was Petrussa from Kitzingen Abbey; she was followed by Gertrude, the daughter of Hedwig. The abbey was richly endowed with lands by Duke Henry. When Hedwig became a widow in 1238, she went to live at Trzebnica and was buried there.

In the 12th century, the area was among the possessions of the Premonstratensian St. Vincent monastery at Wrocław. Trzebnica itself was first mentioned in an 1138 deed, then held by the Polish voivode Piotr Włostowic and later seized by the Silesian duke Władysław II the Exile. As a result of the fragmentation of Poland it was part of the Silesian province of Poland.

In 1202 Władysław’s grandson Duke Henry I the Bearded and his wife Hedwig of Andechs founded a Cistercian convent, present-day Sanctuary of St. Jadwiga in Trzebnica, the first in Poland. The couple signed the deed of donation on 23 June 1203 in the presence of Hedwig’s brother Ekbert Bishop of Bamberg; the monastery was settled with German nuns descending from Bamberg in Franconia. In 1218 Hedwig’s daughter Gertrude became abbess of Trzebnica, the first of many Piast princesses to hold this office. After Duke Henry died in 1238 and was buried in the church, his widow moved to the Cistercian convent which by now was led by her daughter. Hedwig died in October 1243 and was buried there also, while some of her relics are preserved at Andechs Abbey in Bavaria, she was canonized in 1267.

In 1250 Trzebnica received town privileges, it passed under the jurisdiction of the Lower Silesian Duchy of Oleśnica in 1323, a Bohemian fief from 1328. In 1480 Duke Konrad X the White granted the town to the Cistercian abbey. Town and monastery were devastated several times, by fires as well as by the plague, but also by Hussite troops in 1430.

During the Thirty Years’ War, the town was plundered by Swedish forces and the nuns had to flee across the border to nearby Poland. After the war the premises were rebuilt in its present Baroque style. In the 17th century Trzebnica belonged to the Polish-speaking area in Silesia.

In 1742 Trzebnica (as Trebnitz) with most of Silesia was annexed by the Kingdom of Prussia and the monastery was finally securalized in 1810. Meanwhile, the town had become a centre of cloth manufacturing. In 1870 the Order of Saint John acquired the former abbey’s estates to establish a hospital, cared for by the Sisters of Mercy of St. Borromeo up to today. Between 1871 and 1945 the town was part of Germany. It was heavily damaged during the Vistula–Oder Offensive of the Red Army in the last days of World War II.

After Nazi Germany’s defeat in World War II, the town once again became part of Poland. The local population was expelled and replaced by ethnic Poles. From April to June 1945, Trzebnica (instead of Wrocław) was the first post-war regional capital of the Lower Silesian (Wrocław) Voivodeship.

Up to 1515, the abbesses were first princesses of the Piast dynasty and afterwards members of the nobility. It is said that towards the end of the thirteenth century the nuns numbered 120. The abbey also became a mausoleum of many rulers of the fragmented Silesian Piasts. In 1672 there were 32 nuns and 6 lay sisters, in 1805 there were 23 nuns and 6 lay sisters. The abbey suffered from all kinds of misfortunes both in the Middle Ages and later: from famine in 1315, 1338, 1434, and 1617, from disastrous fires in 1413, 1432, 1464, 1486, 1505, 1595, and 1782. At the Protestant Reformation, most of the nuns were Poles, as were the majority until during the eighteenth century.[citation needed] The abbey of Trebnitz suffered so greatly during the Thirty Years War that the nuns fled across the border on the territory of the most unaffected Polish–Lithuanian Commonwealth, as they did again in 1663 when the Turks threatened Silesia.

In 1742, in the aftermath of the First Silesian War and the Treaty of Breslau, Trebnitz found itself under the governance of Protestant Prussia and started to suffer from political discrimination. The last abbess, Dominica von Giller, died on 17 August 1810, and on 11 November 1810, the abbey was suppressed and secularized by order of King Frederick William III. The building, which was very extensive, was sold later and turned into a cloth factory. In the late 19th century, the ruined abbey was bought by Knights Hospitaller and later by the female order of Sisters of St. Charles Borromeo as a hospital conducted by the sisters.

Trzebnica (Polish pronunciation: Polish: /teb’ńica/; German: Trebnitz, Czech: Třebnice) is a town in Lower Silesian Voivodeship in western Poland. It is the seat of Trzebnica County, and of the smaller administrative district (gmina) called Gmina Trzebnica.

The town lies within the eastern Trzebnickie Hills in the historic Lower Silesia region, approximately north of the regional capital Wrocław. It is part of the Wrocław metropolitan area. As of 2019, it has a population of 13,331.

Trzebnica’s Sanctuary of St. Jadwiga is one of the historical burial sites of Polish monarchs and consorts.

In 2017, the town was the co-host of the World Games (orienteering, middle distance).

The former Cistercian monastery is one of the largest monastery buildings in Central Europe. It was built in the years 1696-1726 at the site of a former, substantially smaller building from the beginning of the 13th century. The building is on 2 floors with 2 corner pavilions by the facade wall. The abbey contains a number of interesting sculptures and images; notable are also the beautiful refectories (dining rooms). As of 1870, sisters of the order Kongregacja Miłosierdzia Świętego Karola Boromeusza work here. 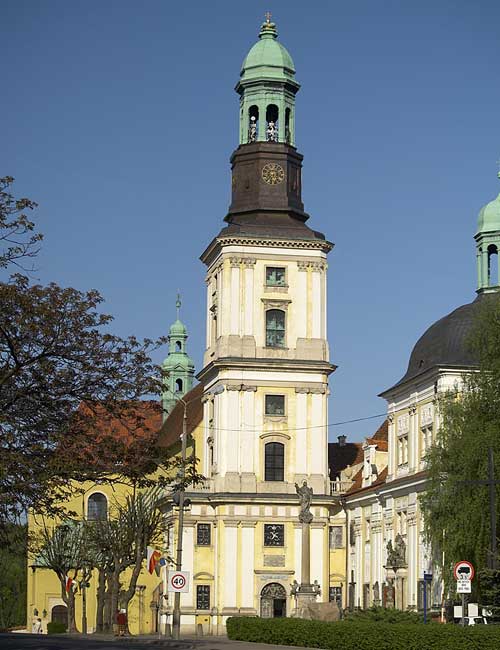 The church is the oldest sanctuary in Silesia; it is one of the most important tomb churches of the Silesian Piast genus and is dedicated to the worship of St. Jadwiga. The church is 80 m long and 23 m wide. The main ship consists of four square sections, covered with cross vaults. Of the original Late Romanesque building from the early 13th century. are only preserved parts of the walls and two portals as well as St. Bartolomeus’ crypt, located beneath the presbytery (choir). In the middle of the Presbytery are the tombs of Prince Henryk Brodaty and Grand Master of the Crusader Order, Konrad von Feuchtwangen. On both sides of the Presbytery there are 2 chapels, respectively. Saint Jan’s and St. Jadwiga’s chapel. Midway to see St. Jadwiga’s symbolic tomb, namely in the place where her relics were placed under the building of St. Jadwiga’s chapel. This chapel is the first building or building part of Poland erected in pure Gothic style; building time is 1268-69. The chapel contains the saint’s impressive, baroque sarcophagus, made of marble and alabaster. Beneath a canopy, supported by columns, rests the alabaster statue of St. Jadwiga.

The Annual Feast Day of Basilica of Saint Jadwiga Trzebnica, North of Wrocław, in Silesia, Poland is celebrated on 17th July.

The Regional Museum Is Housed In An 18th-Century House On The Square In Trzebnica. The Permanent Exhibitions Include Documents And Pictures From 1945-47, A Photographic Exhibition On Trzebnica In The Early 20th Century, Graphics From Trzebnica From The 18th And 19th Centuries, Copies Of Documents And Stamps From The Middle Ages, Including . Stamps Of Prince Jadwiga, The Silesian Princes, The Monastery Of Trzebnica, The City Of Trzebnica’s First Stamp And Wroclaw Bishop’s Stamp; Further Exhibitions On The 500,000 Year Old Hunter And Gatherer Culture, Populated By The Species Homo Erectus, Found Traces Of Winna Góra (Kocia Góra), Old Town Maps, The Origins Of The Monastery And Basilica And Much More.

The Museum Of The Jadwiga Cult Is Housed In A Wing Of The Pilgrimage House, Built In 1978-81 Next To The Basilica. Every Year In Late September, Thematic Exhibitions Are Organized Here.

There is a kiosk next to our basilica where you can buy religious items, such as books, brochures, paintings, pictures, figures, postcards related to the Sanctuary of Saint Jadwiga as well as the figure of the Saint, moreover: rosaries, prayer books, candles, calendars, albums.