Divine Mercy Krakow Shrine / Divine Mercy Sanctuary, Roman Catholic basilica, Kraków, Poland is at the heart of the Divine Mercy shrine in Kraków-Łagiewniki stands the chapel where the miraculous image of Merciful Jesus and the tomb of St. Faustina are to be found.

This small church, consecrated in 1891 and dedicated to St. Joseph, was built within the complex of the convent of the Sisters of Our Lady of Mercy and once served only the Sisters and their wards.

This chapel has since witnessed the prayer of the Apostle of The Divine Mercy and the extraordinary graces (including the revelations of Jesus and the Blessed Mother) received by her in this place. With her death, the message of God’s Mercy, which by the will of Christ she gave to the Church and the world, was deposited in this place.

Devotion to The Divine Mercy

Souls who spread the honour of My mercy I shield through their entire lives as a tender mother her infant, and at the hour of death I will not be a Judge for them, but the Merciful Saviour (St. Faustina Diary 1075)

The Divine Mercy Shrine (Polish: Sanktuarium Bożego Miłosierdzia) is a Roman Catholic basilica dedicated to the Divine Mercy devotion, and is the resting place of Saint Faustina Kowalska, canonized on April 30, 2000.

The new basilica was built between 1999–2002. Three Popes have visited the shrine and millions of pilgrims from around the world continue to visit it every year.

The site of the building originally housed the neo-Gothic monastery complex of the Sisters of Our Lady of Mercy (founded in 1862), which was designed by Charles Zaremba and was built between 1889–1891. In 1966, the remains of Sister Faustina were moved to the church. In 1968 Cardinal Karol Wojtyła (later Pope John Paul II) designated the church as a shrine, thanks to the remains of Sister Faustina.

In 1985, Pope John Paul II called Lagiewniki the “capital of the Divine Mercy devotion”. Since the beatification of Saint Faustina in 1993, her remains rest on the altar, below the image of Divine Mercy.

The Łagiewniki Divine Mercy shrine became the centre of devotion to The Divine Mercy, the place from which this message is spread throughout the world and the place to which people from every continent come on pilgrimage. They come asking for many graces, to which the votive offerings in the display cases around the chapel bear witness.

The rapid development of the devotion to The Divine Mercy and the many pilgrimages to the Shrine in Łagiewniki as a consequence of the beatification of Sister Faustina, led to the laying of the Foundation in 1966 by the Archbishop of Kraków, Cardinal Franciszek Macharski.

The aim was to build a new church (for 5,000 persons) together with facilities for pilgrims. A year later, on 7 June 1997, during his visit to Łagiewniki Shrine, the Holy Father John Paul II blessed the cornerstone brought from Calvary for the construction of the church.

He also viewed a model showing the planned development of the place and added his signature to it. On 17 August 2002, during his final pilgrimage to Poland, he consecrated the new church and there he entrusted the whole world to God’s Mercy. Since 6 March 2003, the church has held the title of Minor Basilica.

Built according to the design of Witold Cęckiewicz, the basilica, resembles a ship and can be associated with a contemporary “ark of the covenant”, in which everyone who puts their hope in the mercy of God can find salvation. In the chancel behind the large stone altar, there is a tabernacle in the shape of the globe with continents outlined on it.

The tabernacle is surrounded by a bush tossed by strong winds, symbolizing the modern world or man confused by different currents. The image of Merciful Jesus (by Jan Chrząszcz) stands within the bush above the tabernacle, reminding one that “in the mercy of God the world will find peace and mankind will find happiness” – as the Holy Father John Paul II said.

Some people see in the Shrine interior a symbolic representation of the burning bush from which God spoke to Moses. As God spoke to Moses in the past, so in our times God has spoken through St. Sister Faustina, proclaiming the prophetic message of Mercy for the Church and the world.

To either side of the chancel, on the walls that form part of the nave, you find facing you on the left the image of Our Lady of Mercy of the Gate of Dawn (by Jan Chrząszcz); and on the right, words spoken by the Holy Father John Paul II in this basilica on 17 August 2002 as a part of the act of entrusting the world to The Divine Mercy. 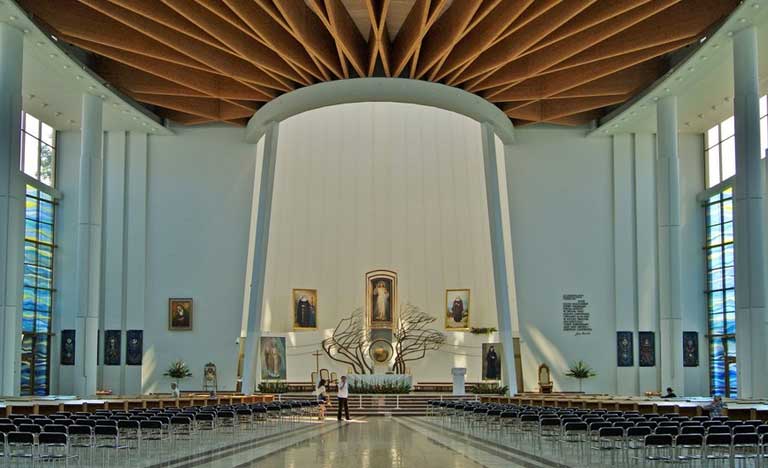 The Divine Mercy Sanctuary (Sanktuarium Bozego Milosierdzia) is a church located on the outskirts of Krakow, Poland. The church was consecrated in 1891 and dedicated to St. Joseph. It was originally built as part of the convent of the Sisters of Our Lady of Mercy. This church is home to the tomb of St. Faustina, a nun who saw a vision of Jesus in 1931. It is said that when he appeared to her, he instructed her to commission an image of him along with the quote, “Jesus, I trust Thee.” This image, painted by Adolf Hyła, has spread in the form of copies and reproductions throughout the world.

St. Faustina rests in a white marble coffin below the original image of the Merciful Jesus along with other relics. It is a popular place for pilgrimages for Catholics from around the country and even from other parts of the world. Attached to the church is a tower that provides spectacular views of the city. 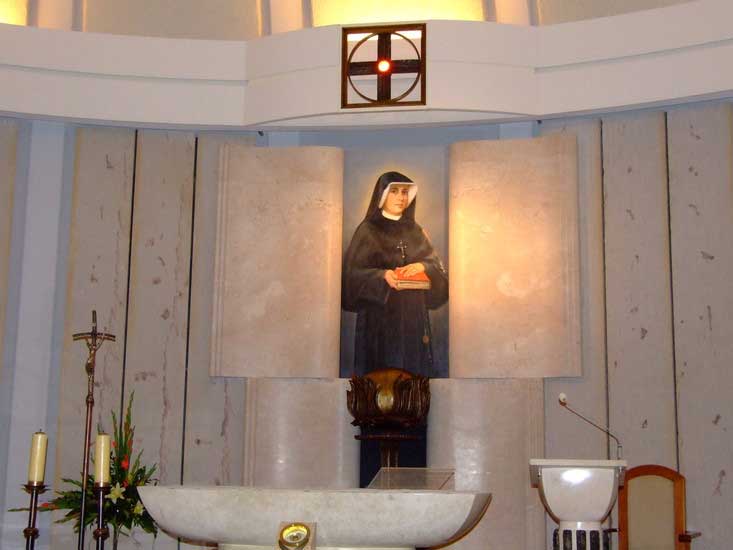 By esthetic standards the 20th-century icon of the Lord’s Grace hardly matches other Krakow’s twenty-odd wonder-making sacred images that are usually much older and mostly valuable as objects of art. Yet devotion of thousands of believers has made the painting sacrosanct. It depicts Christ as He appeared before a visionary Polish nun, St. Faustyna Kowalska, one February evening in 1931. The Lord instructed her to commission this very likeness of Himself, complete with the caption which reads in Polish: Jesus, I trust Thee. What is more, in the series of appearances over the ensuing years He also revealed to St. Faustyna His dogma of Divine Mercy.

At first the pious sister found little understanding among her contemporaries who thought the days of miracles were long past. The Church gave rather lukewarm support to St. Faustyna and the revelations she had heard. Nonetheless, with time the knowledge of them and the cult of the picture have spread far.

Nowadays the icon adorns many a Catholic chapel throughout the world. And pilgrims, both Polish and foreign, come daily in their thousands to pray before the original picture at the Krakow convent in the Lagiewniki area where 33-year-old Sister Faustyna died in 1938 and where she is buried. Some of the resultant faith cures are well documented.

In March 1981, while praying at the tomb of St. Faustina at the church, Maureen Digan of Massachusetts reported a healing. Digan had suffered from lymphedema for decades, and had undergone 10 operations, including a leg amputation. Digan reported that while praying at Faustina’s tomb she heard a voice saying “ask for my help and I will help you” and her constant pain stopped.

Upon her return to the US, five Boston area physicians stated that she was healed (with no explanation). Digan’s healing was declared miraculous by the Vatican in 1992, and paved the way for the beatification of Faustina Kowalska.

Papal visits On June 17, 1997 Pope John Paul II visited the church to pray at the tomb of Saint Faustina – an event commemorated by a relief at the entrance to the chapel.

In May 2006, Benedict XVI visited the chapel, and a second relief commemorates that. During the 2006 pilgrimage by Pope Benedict XVI, he unveiled a statue of Pope John Paul II at the observation tower at the basilica, as the seventh sculpture of John Paul II in Kraków.

In July 2016, Pope Francis visited the Basilica as part of the Extraordinary Jubilee of Mercy and as part of the World Youth Day celebrations taking place in Kraków.

In 1999–2002, a modern two-story, ellipsoidal basilica, specifically devoted to the Divine Mercy was built. The building was designed to resemble a boat, and has a 77-meter high observation tower that resembles a mast.

The basilica can accommodate about 5,000 people and the main chapel has about 1,800 seats. The altar in the main sanctuary houses the Divine Mercy painting and relics of Saint Faustina. The image above the main altar was painted by Adolph Hyla in 1944, and replaces the first image Hyla painted in 1943 as a votive offering for surviving during World War II. The image and the basilica are a major pilgrimage site and in 2011 the basilica received around 2 million pilgrims from around the world.

The lower level of the church has a central a chapel dedicated to Saint Faustina, with four side chapels. The upper part of the basilica has free-standing post-modern Chapel of Perpetual Adoration of the Blessed Sacrament. On June 24, 2007, on the 60th anniversary of Operation Vistula, the Basilica opened a Greek Catholic chapel dedicated to reconciliation, and as a gift to the Greek Catholic Church.

The World's Centre of Divine Mercy 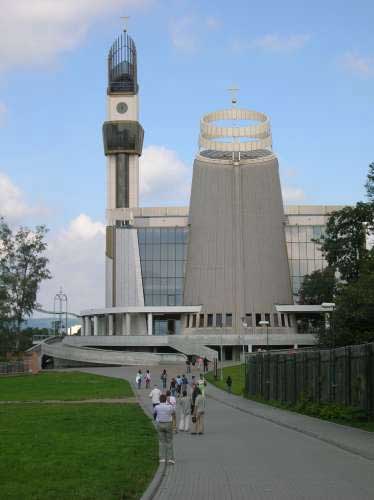 Now the 19th-century brick convent of the Sisters of God’s Mother of Mercy is part of the vast Sanctuary of Divine Mercy (Sanktuarium Bozego Milosierdzia in Polish) complete with a spacious main church, an array of chapels, a viewing tower, a hostel and a modern pastoral lodge, cafeterias, shops, parking lots, etc.

On August 17, 2002 Pope John Paul II consecrated the sanctuary’s majestic 1,600-sq-m brand-new basilica. His Holiness, previously the Krakow archbishop Karol Wojtyla, is said to be once a driving force behind the worldwide Catholic movement to worship the Lord’s Mercy with its center in the Lagiewniki sanctuary. Every year some two million pilgrims from all over the world visit the shrine.

The Roman Catholic Church observes Tuesday, Oct. 5, the life and works of Saint Faustina, the revered Apostle of the Divine Mercy.

How to get to Divine Mercy Shrine

The Shrine of The Divine Mercy in Kraków-Łagiewniki is situated some four kilometers south of Krakow’s central Old Town historic district. Taxi is the most convenient means of transport. The fare from the center of Krakow to the Sanctuary of Divine Mercy should not exceed an equivalent of six euro. Conversely, you may take trams number 8 or number 19, get off at a stop called Sanktuarium, cross the busy Zakopianska street (there is an underpass), and walk some 400 meters up Siostry Faustyny street.

It is situated near the so-called “Zakopianka” road – the road from Krakow to Zakopane, and near the Łagiewniki railway station.

From the “Zakopianka” road – turn at the Łagiewniki railway station.
From the Katowice and Tarnow motorway – turn by the sign: Sanktuarium Bożego Miłosierdzia w Łagiewnikach.