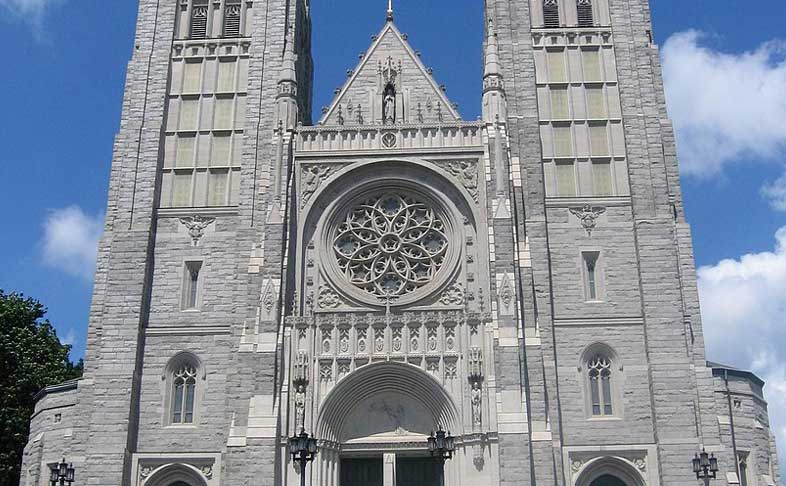 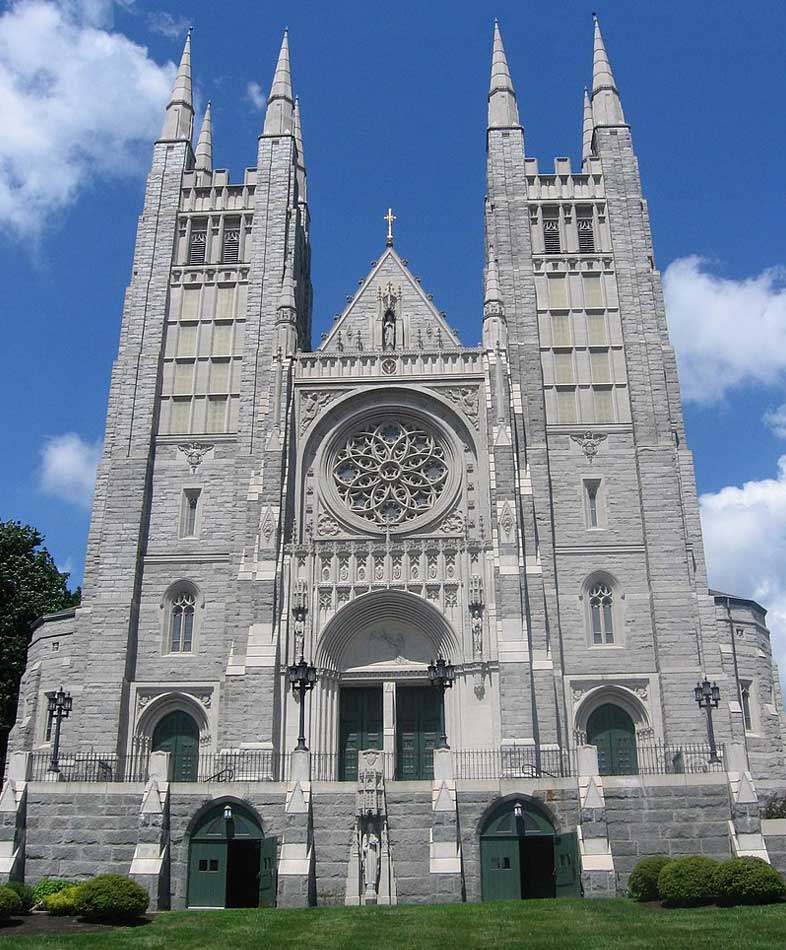 Basilica of Saints Peter and Paul in Lewiston, Maine, also known as Ss. Peter and Paul Church, is a church which is a part of the Roman Catholic Diocese of Portland.

Saints Peter and Paul Parish, founded in 1870, is the oldest parish for the French-speaking Catholics in the Diocese of Portland. For the French Canadians who began arriving in Lewiston in the mid-19th century, the Catholic church was, next to the family, the focal point of life. Under the guidance of the Church, virtually every spiritual, social, recreational, and educational need was taken care of.

These French Canadians who immigrated south looking for work in the Lewiston mills were proud, strong, and hardworking people. Below is the timeline of how Saints Peter and Paul evolved.

Basilica of Saints Peter and Paul, Lewiston isn’t just the chronicle of an old church, but of the amazing faith of the French immigrants whose struggles, patience, and great generosity built it. It reflects an aspect of the immigrant experience played out over and over again across the United States. In this way, the history of Saints Peter and Paul is an invaluable chapter on the history of this nation. 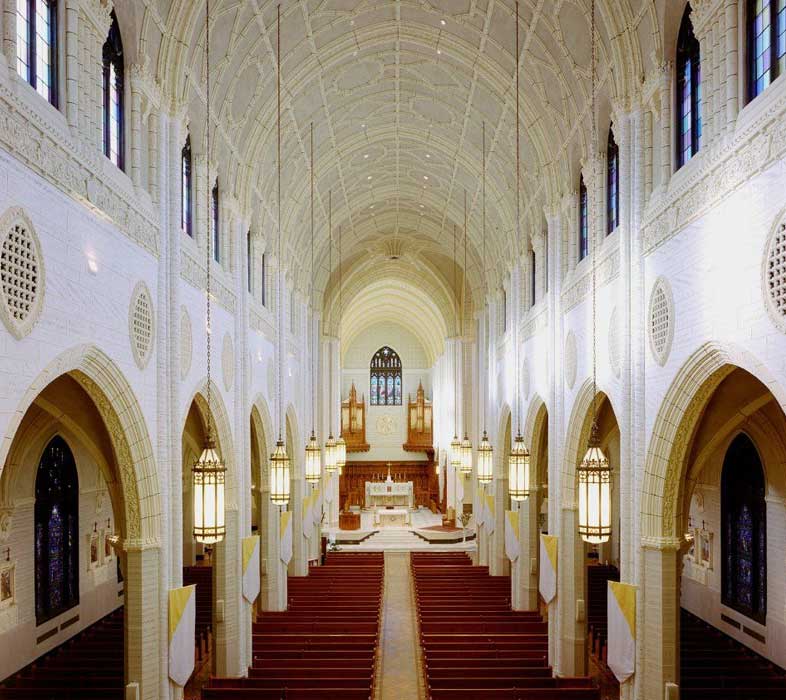 History of Basilica of Saints Peter and Paul, Lewiston

In the mid-nineteenth century, Lewiston had an influx of Roman Catholic French Canadians who came to work in the local textile mills. Their arrival created the need for a French-speaking priest. Initially, masses were held in the basement of Saint Joseph’s Church, until the number of parishioners attending the masses reached 1,000. Because of the large number of French-speaking parishioners, the masses were moved to the nave of Saint John’s on July 2, 1870. By 1871, the number of parishioners had grown too large even for Saint John’s.

The following year, the cornerstone of Saint Peter’s was laid, and the dedication mass was said in 1873. In 1881, the Dominican Fathers of Lille, France, and the Province of Québec took over the administration of the church. In 1899, the first reference to Saint Peter and Saint Paul was made, when the Dominicans published their Album Historique, calling the parishes S. Pierre S. Paul de Lewiston, Maine. In 1902, the parish was split to create the Saint Louis church, across the river, in Auburn.

By 1905, even after the split, the church had gained almost 10,000 parishioners. The old church had to be torn down, and the basement of the new church was finished in 1906. In 1907 and 1923, the Diocese of Portland requested that the parish be split, to create the parishes of Saint Mary’s in 1907, and the Holy Cross and the Holy Family in 1923. Each time the parish divided, the money it had in its building fund to complete the church was also divided, delaying the top of the church from being built. Finally, in 1933, the Diocese of Portland allowed the parish to build the top part of the church.

The church was finished on July 18, 1936, and was dedicated on October 23, 1938, to the saints the church whose name it bears, Saint Peter and Saint Paul. On July 14, 1983, the church was added to the National Register of Historic Places, for being the second-largest church in New England. In 1986, the Dominicans handed the administration of the church back to the Diocese of Portland. In 1991, the upper church started a renovation project that ended in 2002 with the dedication of a new altar. From 2002 to 2007, the chapel under the church was renovated and reopened, just in time for Mardi Gras, and—incidentally—Lent.

In a 2015 article in the Bangor Daily News, it was reported that the Church was one of the few remaining churches in Maine that still offered a Mass in French. It was reported in the Portland Press Herald that an influx of French-speaking Catholic immigrants from central Africa have been a driving force in supporting the French-language mass. 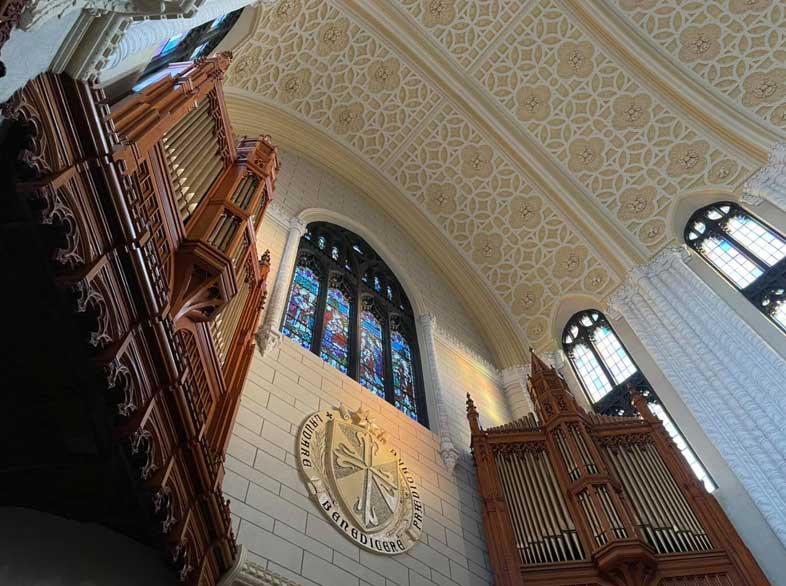 Architecture of Basilica of Saints Peter and Paul, Lewiston

2005 –  Official celebration of the conferral of the title of Basilica on May 22, 2005. Basilica Celebration Events included concerts, festive liturgies and other special events, May 18 – May 22, 2005.

1986 –  The Dominicans left after 105 years of service. Administration of the parish returned to the Diocese of Portland.

1983 –  Saints Peter and Paul church placed on the National Register of Historic Places by the Federal Department of the Interior on July 14, 1983. Second largest church in New England.

1933 –  Diocese of Portland give permission to finish the Upper church.

1907 –  The parish growth was so rapid the Diocese of Portland asked the parish to subdivide the formation of Saint Mary’s parish and again in 1923 for the formation of Holy Cross and Holy Family parishes. Each time, Saints Peter and Paul’s building fund was also split. 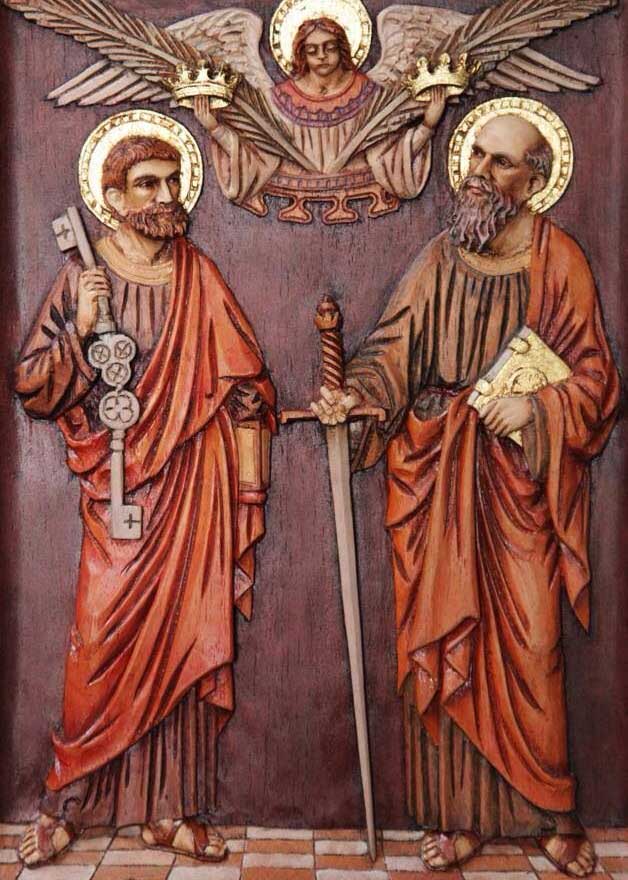 1905 –  The first Saint Peter’s church was demolished. The structure was too small to accommodate the nearly 10,000 parishioners.

1899 –  The Dominicans published their Album Historique in which they referred to the parish as S. Pierre S. Paul de Lewiston, Maine.

1881 –  Dominican Fathers of Lille, France and the Province of Canada took over the administration of the parish.

1870 –  French congregation moved from the basement of Saint Joseph’s church to Saint John, a storefront chapel. The first mass of the new French parish at Saint John’s was celebrated on July 2, 1870.

1869 –  Basement of Saint Joseph’s church unable to accommodate the 1,000 Canadians.

1857 – Diocese of Portland sent a French speaking priest to serve the French Catholics in the basement of Saint Joseph’s church.

1850 – In the late 1850s, French-speaking Canadians arrived daily into Lewiston 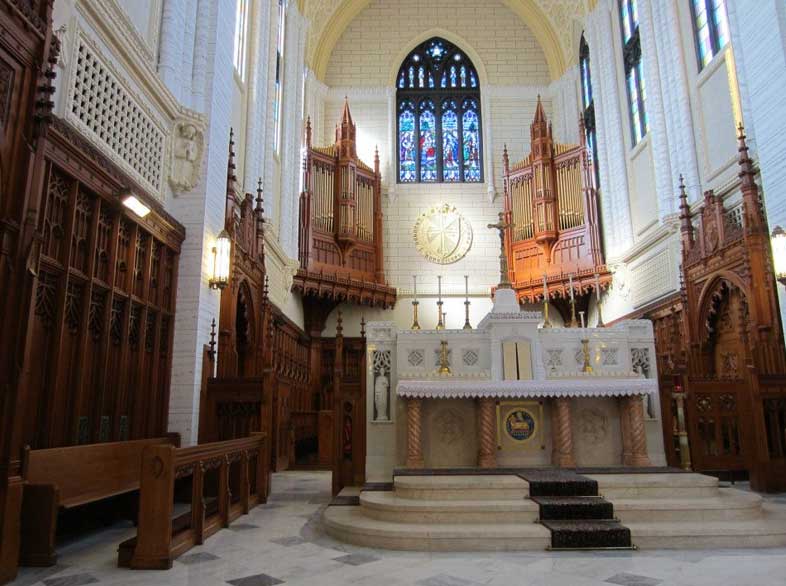 The Basilica of Saints Peter and Paul, Lewiston has two pipe organs both made by Casavant Frères which were both dedicated in 1938; Opus 1587 (above the sanctuary) and Opus 1588 (in the gallery). Both are electro-pneumatic.

This organ is in center chambers at the front of the room with visible façade pipes or case front. It has 2 manuals, 3 divisions, 10 stops, 28 registers, 10 ranks, and 737 pipes. Manual compass is 61 notes. Pedal compass is 32 notes. 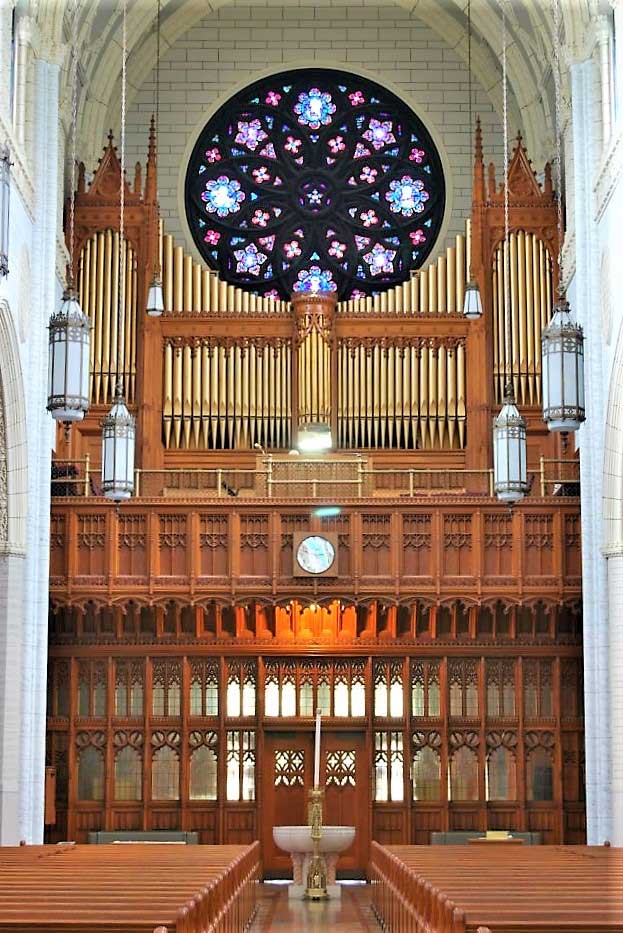 Basilica of Saints Peter and Paul, Lewiston – It is not without justification that the pipe organ is called the “king of instruments”.  As a single instrument, it can not only rival the full power of a symphony orchestra but imitate many of the orchestra’s individual subtleties.  The pipe organ produces its sound in much the same way as the human voice does, with air.  This makes the pipe organ an excellent accompaniment instrument for the voice, from a single person to a large choir.

With many different types of pipes, a pipe organ is also capable of a great variety of sound color. This diversity of sound has inspired many of Western music’s greatest masters to compose some of their greatest works.  Gabrieli, Bach, Mozart, Mendelssohn, Brahms, Franck, and Messien all wrote masterpieces for an instrument that not only represents a pinnacle of musical achievement, but in its construction is also a triumph of human mechanical ingenuity.

The French Canadians who made Lewiston their home and Saints Peter and Paul their church in the late 19th century attached great value to music and the arts.  In pursuit of excellence, they hired one of North America’s greatest organ builders, Casavant Frères, to create an instrument that would fill their new edifice with a glorious sound. 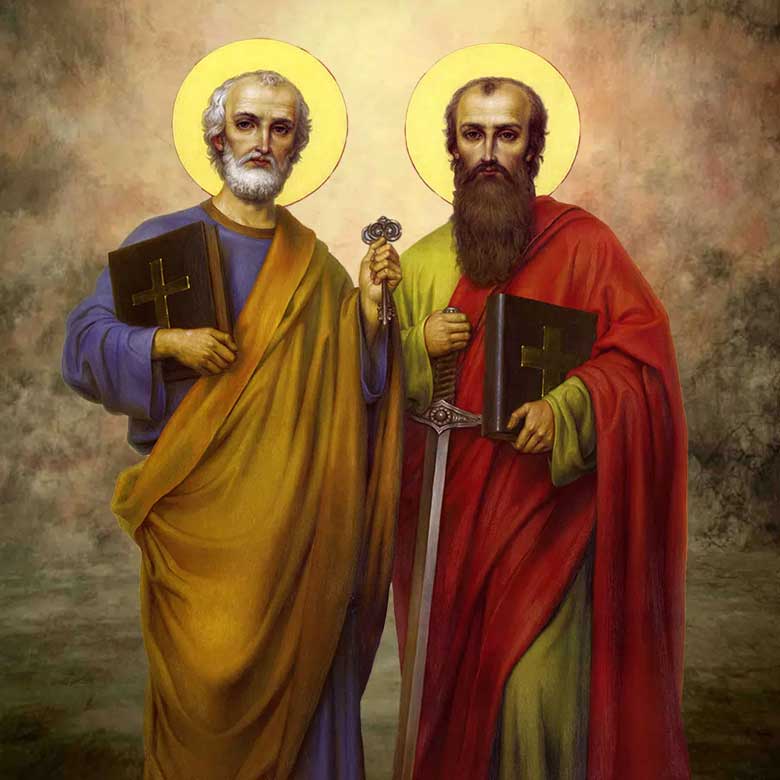 The results were the opus 1587 and 1588 instruments that, combined through a single console, comprise the largest church organ in the state.  After its dedication in 1938, the Casavant was used to accompany several community ensembles and served as a recital instrument for some of the world’s leading organists including the great French organist, Marcel Dupre and Dr. Charles-Marie Courboin.

Of the many people who have Bernard Piche playing the organ at the Basilica of Saints Peter and Paul served as an organist at Saints Peter and Paul, the most renowned was certainly Bernard Piché.  A Recipient of the Prix d’Europe prize, Mr. Piché studied under the master Charles Tournemire and went on to concertize widely in North America to great acclaim under the auspices of Colbert-Laberge Concert Management.  Mr. Piché was appointed to his position at Saints Peter and Paul in May of 1945 and served until 1966 when he left to take a place on the faculty of the Conservatory of Quebec in Trois-Riviers.

Now that the economic revival of Lewiston-Auburn is well underway, it is time to also revive one of the area’s great musical treasures.  Through its use as a superb accompaniment and solo instrument for concerts, recitals and liturgical events, the Casavant organ in Saints Peter and Paul and its accompanying acoustic could once again be a cornerstone for the arts in Lewiston-Auburn.  Your support of this endeavor will not only return this world-class instrument to its former glory but will help to ensure that future generations will have this tremendous resource. 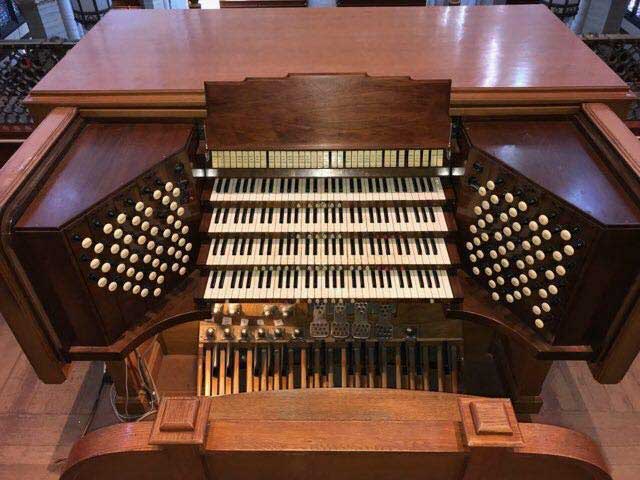 gare du Grand Tronc, Lewiston, Maine are the nearby Train Station to the Basilica.