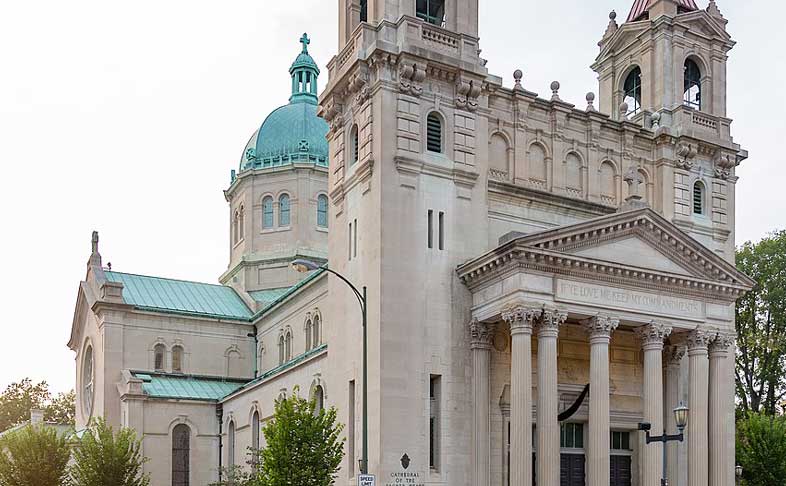 Cathedral of the Sacred Heart, Richmond 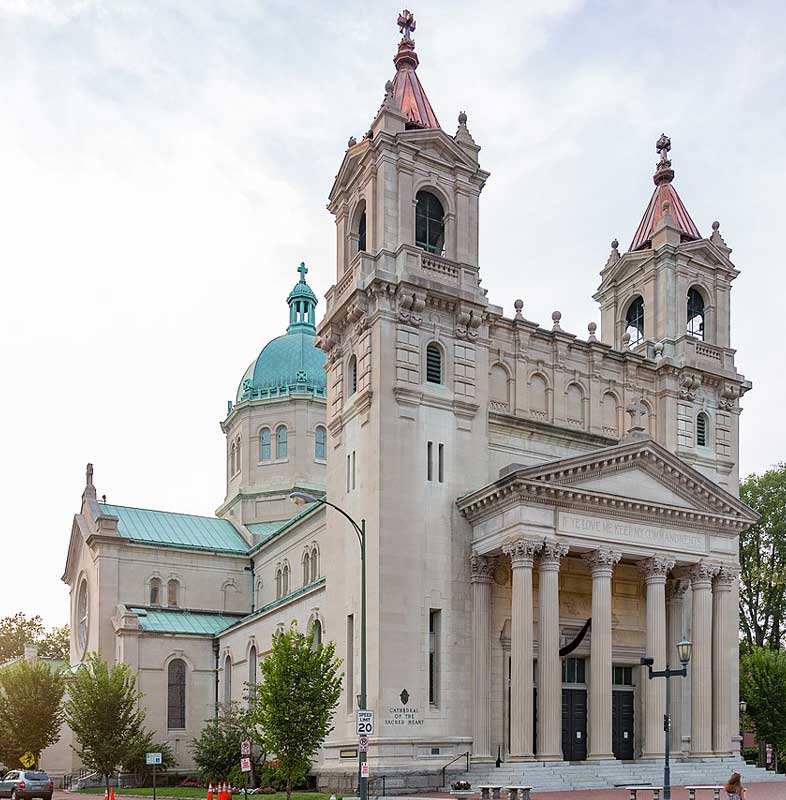 The Cathedral of the Sacred Heart, Richmond, Virginia, is the seat of the Roman Catholic Diocese of Richmond. The property is located along North Laurel Street at 823 Cathedral Place, facing Monroe Park one block north of Main Street. Construction of the cathedral was begun in 1903, financed by donations of Thomas Fortune Ryan and his wife; it was the only cathedral at that time known to be constructed by the exclusive patronage of a single family.

There is wheelchair access to the sanctuary through the ramp on our Parish Hall side (north side) and then into the church using the ramp in the North Transcept (St. Vincent dePaul alcove). The restrooms off the Parish Hall have handicapped accessibility. An elevator allows access to our Museum of Virginia Catholic History and crypt, located under our altar area.

The Cathedral is recorded on the National and State Registries of Historic Landmarks. Dedicated in 1906, the Cathedral is at Laurel and Monroe Park, the center point at which the region’s sectors converge – academic, business, cultural, governmental, human services and spiritual. Its century-old legacy of leadership and service to the Richmond community and to Virginia is deep and rich.

Its design and construction was realized by a single gift of $500,000 provided by Thomas Fortune Ryan, a Virginia-born New York businessman, and his wife, Ida Barry Ryan. The Cathedral has recently undergone a more than $6 million interior and exterior restoration. Over the decades, the Cathedral has played host to diverse performing arts productions and concerts featuring local, national and international artists. The Cathedral’s design, acoustics and ambience make it a particularly pleasing venue for concert audiences and performers.

The first Catholic Cathedral in Richmond, Virginia was constructed on 800 East Grace Street in 1834. At the time, Richmond had a modest population of only 16,000 people. In 1867, following the Civil War, the growing population prompted Bishop John McGill to purchase property in the far west end of the town. A lack of funds, however, prevented further action.

In 1884, a substantial monetary contribution from entrepreneur Thomas Fortune Ryan and his wife, the philanthropist Ida Mary Ryan, allowed work to proceed on the project. The funds permitted the purchase of additional property on the block and for construction to begin. The Cathedral of the Sacred Heart, built from 1903 to 1905, would allow local worshipers to attend services without crossing the James River.

This is the only cathedral at the time whose development is known to be entirely financed by the exclusive munificence of a single family. The consecration ceremonies, held on Thanksgiving Day in 1906, were attended by numerous eminent Catholic dignitaries from across the country. 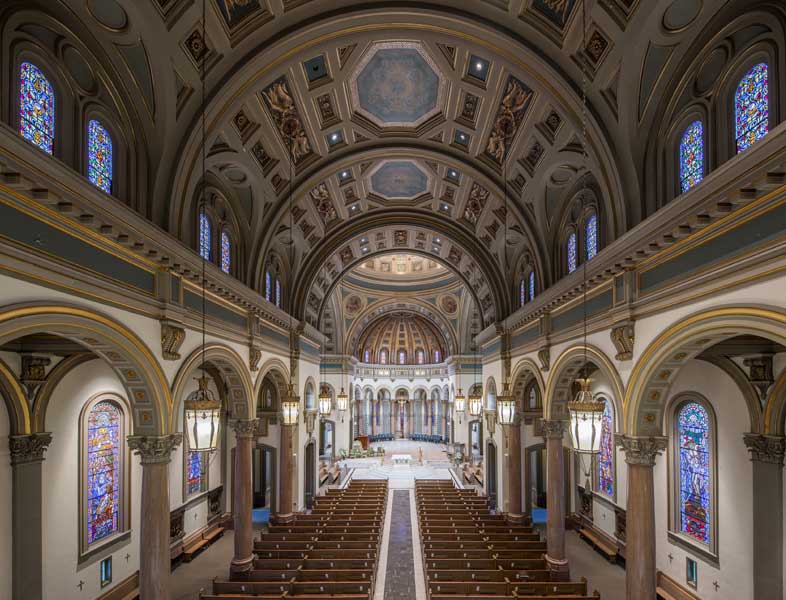 The Ryans chose Joseph Hubert McGuire as the church architect. The cathedral and its accompanying structures—which include cloisters, diocesan gardens, and the episcopal residences—span the entirety of the block. Architecturally, it is considered to be the the finest example of ecclesiastical Italian Renaissance Revival style in the State of Virginia.

The Cathedral of the Sacred Heart, Richmond – The exterior is constructed from local granite and limestone from Indiana. The roofing is composed of ceramic tiles and is topped with a 188-foot-wide copper-jacketed dome. Of particular note are the fireproof tiles that line the underside of the pediment—the work of the Spanish builder Rafael Guastavino. Two towers flank the basilica, rising 90 feet into the air.

Since its consecration, several changes to the interior have been made, including the addition of the Limoges stained-glass windows visible today. The 61-bell Cathedral Carillon, manufactured by Van Bergen Foundries, Inc., was installed in 1995. Shortly after the consecration ceremonies, one Protestant laymen stated of the impressive cathedral:

Not alone as a church will the Cathedral of the Sacred  Heart be a power, for its beauty and artistic conception will stimulate and encourage the love of beauty of all buildings, whether secular or churchly. The Cathedral will give Richmond an unchallenged precedence…and will further serve to make Richmond the capital and metropolis of this and adjoining States.

Today, the Cathedral of the Sacred Heart continues to serve the community as the Mother Church of the Diocese of Richmond and as a local parish for its congregation. It is a Virginia Historic Landmark (designated 1981), listed on the National Register of Historic Places (listed 1982), and is a contributing property to the Monroe Park Historic District (designated 1984).

History of Cathedral of the Sacred Heart, Richmond 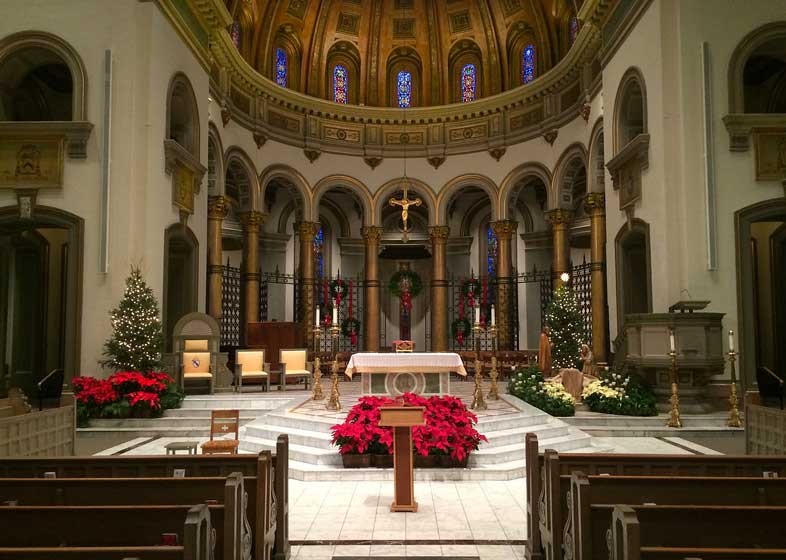 Designed by New York architect Joseph H. McGuire, the Cathedral is considered to be Virginia’s finest ecclesiastical example of the Italian Renaissance Revival style. The building is constructed of Virginia granite and Indiana limestone with a copper dome and tile roof. Six fluted Corinthian columns support the architrave on the front of the exterior, which displays the motto “If Ye Love Me Keep My Commandments” (John 14:15). The outline of the coat of arms of the Diocese of Richmond appears above the name of the church to the left of the columns.

Richmond was a small town of only 16,000 when its first Catholic Cathedral, St. Peter’s, 800 E. Grace Street, was built in 1834. After the Civil War, Bishop John McGill realized that the growing Catholic population would need a new house of worship. In 1867 he purchased a lot in what was then considered the far west end. Lack of funds prevented further action until 1884 when Bishop John J. Keane purchased the remainder of the present block. With the announcement of a gift of $500,000 for the proposed cathedral from Thomas Fortune Ryan and his wife, Ida Barry Ryan, plans for the building were drawn up.

Virginia-born Thomas Fortune Ryan converted to Roman Catholicism en route to Baltimore, Maryland in 1868. In Baltimore Ryan made his fortune in railroads and streetcar transit and married Ida Mary Barry, the daughter of a Catholic former employer.

Ida contributed to various Catholic charities and causes, including in Virginia, but the Ryans’ philanthropy in Richmond increased after they purchased a 5000-acre plot in Nelson County, Virginia. In 1901 Ida donated money to build a church dedicated to the Sacred Heart in Manchester (now part of Richmond) so that worshippers did not have to cross the James River for services.

She also provided funds for the construction of a school, a new chapel convent, and churches in Harrisonburg and Newport News (St. Vincent de Paul Catholic Church). They also funded projects in Washington, D.C. and New York. In 1901 Ida and Ryan each donated $250,000 to build a cathedral overlooking Monroe Park near the Fan district—in today’s money, equivalent to $16,286,000. 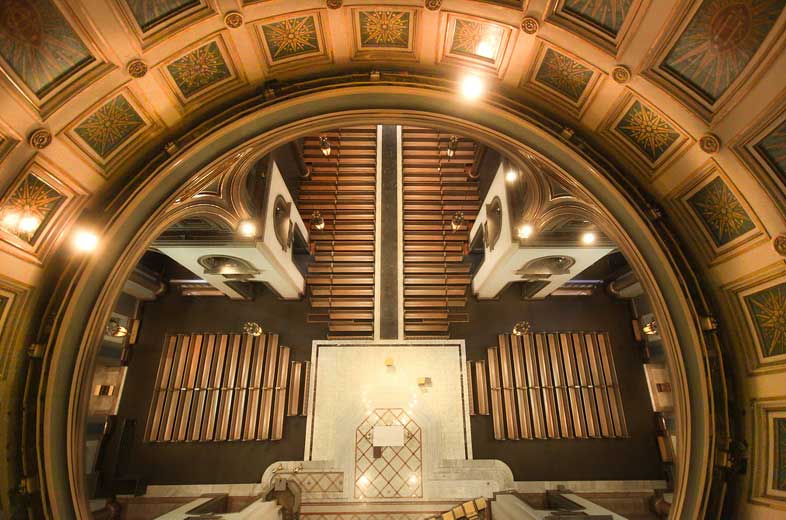 Historically, Richmond did not have a large or influential Catholic population, but it was growing at the turn of the century. Part of the plot for the church had been owned by the Diocese since 1865. The parish had planned for a $120,000 church at the location since 1882, but an effort to purchase the rest of the triangular block stalled until the Ryans’ gift.

On June 4, 1903, Archbishop Diomede Falconio, Apostolic Delegate to the United States, officiated at the laying of the cornerstone, which came from the Garden of Gethsemane. Three years later, thousands of people filled the Cathedral of the Sacred Heart for the Dedication on Thanksgiving Day, November 29, 1906. The consecration ceremony was a milestone in both Richmond’s history and the history of the Catholic Church in Virginia. The event was reported nationally, and the local newspaper devoted two special sections on the religious, architectural, and civic importance of the Cathedral.

Framed by Richmond’s Monroe Park, the Monroe Park campus of Virginia Commonwealth University, and the residential Fan District, the Cathedral serves as the Mother Church of the Diocese of Richmond and as the local parish for its Richmond congregation. The Cathedral is a Virginia Historic Landmark, listed on the National Register of Historic Places, and received the Historic Richmond Foundation’s 1992 Award of Achievement for its restoration.

Architecture of Cathedral of the Sacred Heart, Richmond 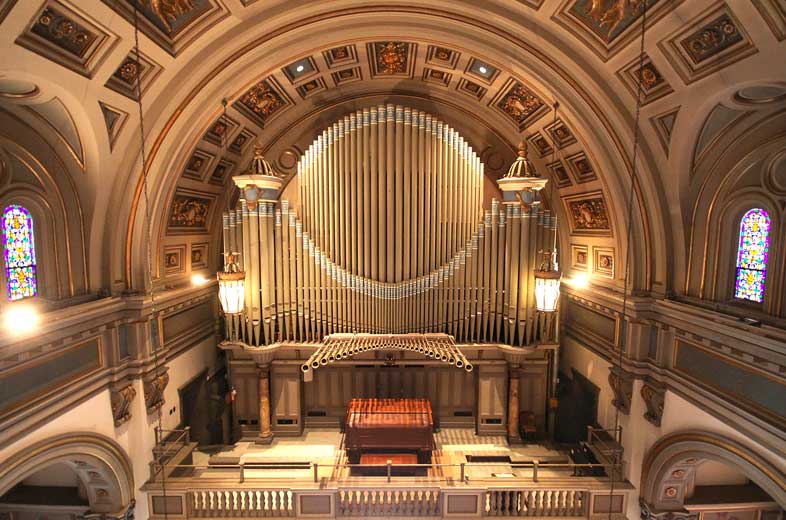 The Ryans chose Joseph Hubert McGuire as the church’s architect. The church, bishop’s house and pastoral home fill the entire block. The cornerstone was laid June 4, 1903, by Father Conway of St. Ignatius, New York; the stone block came from the Garden of Gethsemane. According to a diocesan official, it was the only cathedral in the world erected through the “sole munificence of one family”.

The building is an example of Italian Renaissance Revival architecture. The exterior is constructed from Virginia granite and Indiana limestone; ceramic tiles and a copper-jacketed dome 118 feet (36 m) across complete the roof. The cathedral’s two front towers rise 90 feet (27 m). The portico is supported by fluted Corinthian columns; the entablature features the phrase “If Ye Love Me Keep My Commandments”, while the underside of the pediment is lined with fireproof tiles designed by Rafael Guastavino.

The cathedral was consecrated on Thanksgiving Day, November 29, 1906 in a series of ceremonies throughout the day. The church’s consecration began at 6 am.

In the time period following the Second Vatican Council, the cathedral made radical alterations to its interior. The original high altar was destroyed and a freestanding altar was installed. The nave was enlarged and room made for a larger, more open sanctuary. The marble altar rails, present in the building since its construction, were destroyed. Confessionals were repurposed into display cases. Iconography and statuary which had previously adorned the sanctuary was removed.

The Cathedral Choir: This program enriches, embellishes, and supports the celebration of the Liturgy through God’s gift of music. Discernment of this gift through an informal audition, the ability to read music, and experience as a choral singer are required. Rehearsals are each Thursday from 6:30 pm – 8:30 pm and 45 minutes prior to each Liturgy at which this choir is scheduled to sing. 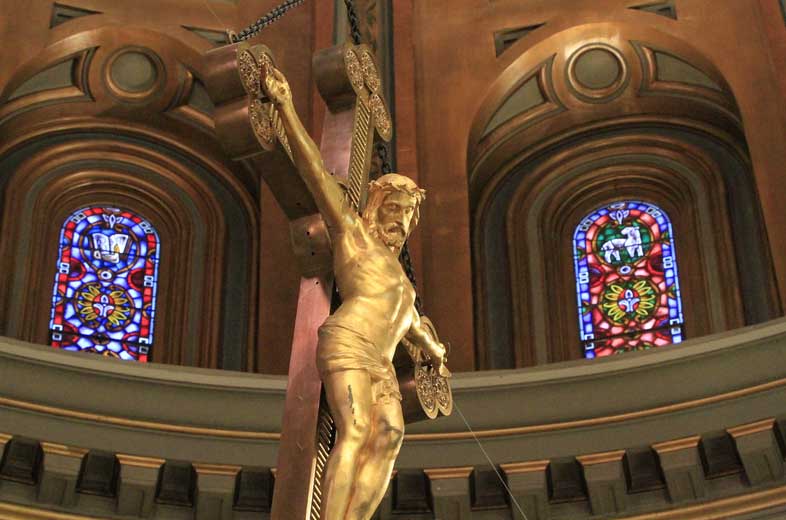 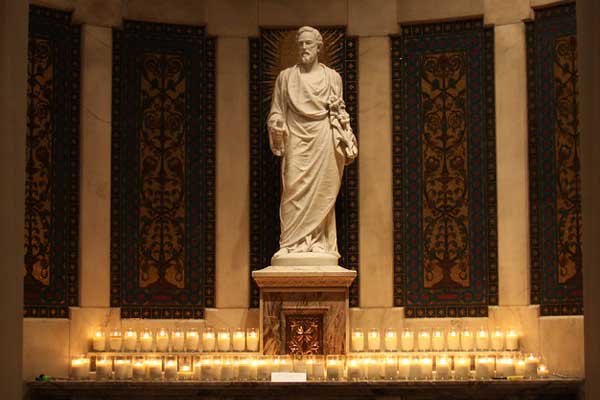 The Museum of Virginia Catholic History was established by the Most Reverend Walter F. Sullivan, eleventh Bishop of Richmond.

In the late 1990s, Bishop Sullivan recognized a growing need for a permanent environment in which to collect and display the rare artifacts and memorabilia that belonged to the Diocese. With the intention of creating a space in which to illustrate the rich history of Catholicism in Virginia, plans to establish a Diocesan museum began to take shape.

Through the efforts and determination of Anne C. Edwards, then Chancellor of the Diocese, Bishop Sullivan’s vision came to fruition in May of 2003 as the Museum of Virginia Catholic History opened its doors to the public for the first time.

In 2008, following the relocation of the Diocesan administrative offices and archives to the new Pastoral Center, the decision was made to move the museum collections into the Cathedral of the Sacred Heart, the mother church of the Diocese. The Cathedral is a well-visited national historic landmark, making it an ideal location for the display of museum artifacts. 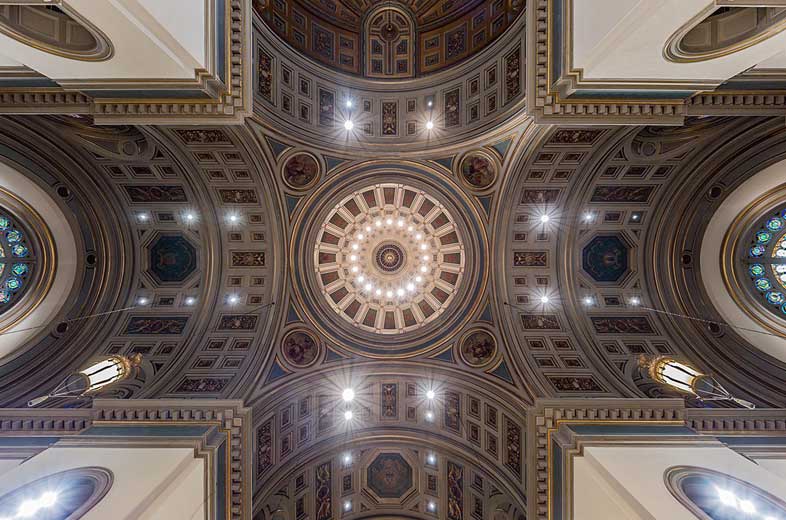 Annual Feast of the Sacred Heart of Jesus held on 24th June. 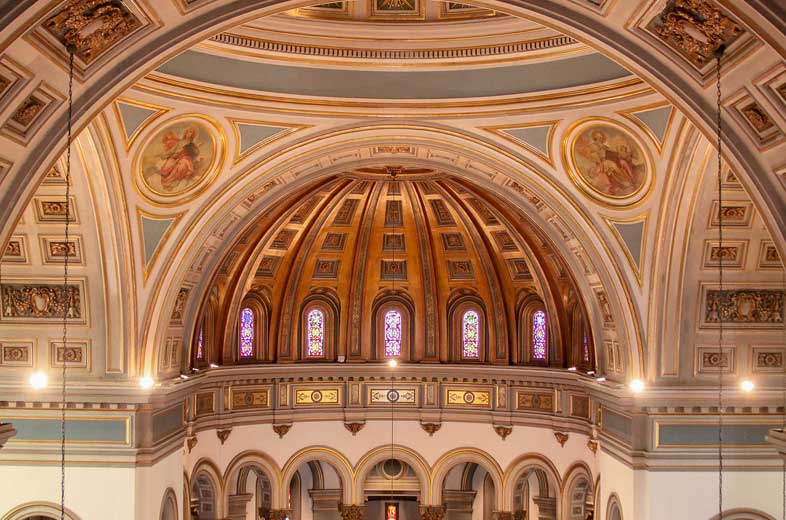 Parking at the Cathedral

VCU Deck Parking is also available. The locations of the West Main Street, West Broad Street and West Cary Street decks. Please pull tickets upon entrance and pay upon exit. Parking costs: $2 per hour with a maximum of $16 per day.   Credit/debit cards and cash are accepted. 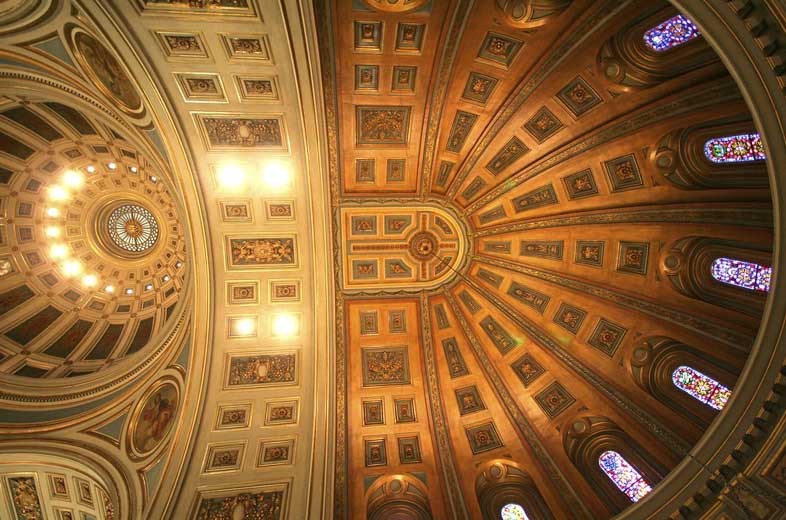 Richmond International Airport in Sandston, Virginia, United States is about 7 miles southeast of downtown Richmond, the capital of the Commonwealth of Virginia is the nearby airport to the Cathedral.