Basilica of Our Lady of Health, Harihar, Karnataka, India 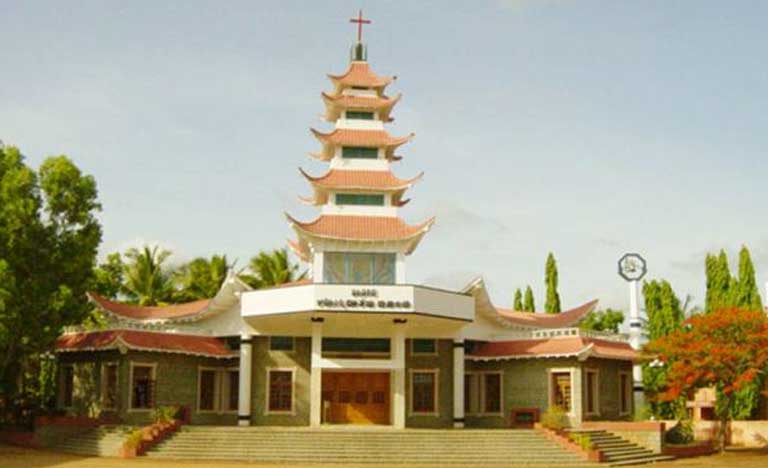 Home » Basilica of Our Lady of Health, Harihar, Karnataka, India

The Shrine has been frequented by the people irrespective of caste, language and religion. Thousands of pilgrims come to this Shrine during the festivities in August–September. The Annual Feast of the Shrine is on 8 September, the Feast of the Nativity of the Blessed Virgin Mary. In 2018, 200,000 devotees attended the feast celebrations.

The shrine has been called as the ‘Vailankanni of Karnataka’. Several miracles are reported to have occurred here.

The devotion of Our Lady of Health at Harihar seems to have begun in the eighteenth century, as can be gleaned from the available documentary sources. People from the neighbouring region belonging to various religious affiliations began to make pilgrimages to this place. The miraculous statue of the Blessed Virgin Mary set up here became an object of veneration. In the course of time a small oratory (later a small church) was constructed in these hallowed precincts. This oratory formed the nucleus of Marian devotion and became a pilgrimage centre. Over the years the oratory has grown in size and its fame has spread far and wide. In the diocese of Shimoga, it has evolved as the most frequented holy place. The annual feast of Our Lady of Health at Harihar, celebrated with due solemnity on September 8, attracts thousands of people of Karnataka as well as of neighbouring states.

The centre of pilgrimage located in the premises of the church at Harihar since more than a century is popularly known now as the Shrine of Our Lady of Good Health. It took roots, as a much frequented and greatly admired centre of pilgrimage and recounts a history of over 200 years in the humble surroundings of the river Thungabhadra.

As year passed by, this centre becomes a parish church at Harihar town with Our of Good Health as its titular.   The parish church has been fulfilling its role and function as a Shrine, although it had no canonical recognition of being a Shrine.  The church precincts have formed an integral part of the “topography” of the faith and piety not only of the Christian denominations but also of other believers.  People of different religious persuasions visit the church all-round the year, to fulfill their vows and promises, offer thanks and invoke divine assistance, through their beloved “Lady of Good Health”. Many of them testify to have received heavenly blessings and favours at this Shrine.

The Church of Our Lady of Health at Harihar is acknowledged as a place of pilgrimage by numerous people, well suited   to foster and enhance piety and as a befitting place for effective proclamation of the Gospel;

The pilgrims its attracts and welcomes indicates that this centre has abundant potential for mission “ad agentes”, in fulfilling its role of evangelization;

This centre serves as a memorial of an extraordinary event that give rise to persevering devotion and as a place of divine assistance, and in virtue of the frequent signs of benevolence that has witnessed as a  place of the efficacious intercession of the Blessed Virgin Mary;

This place bears testimony to the piety and gratitude of the people for the innumerable favours received; and by virtue of the vibrant sacramental and liturgical life, of faith and growth in grace;

Through the ministries of this centre, people are exhorted to a life of radical changes, a life of charity, works of mercy and are urged and inspired to follow Christ more closely.

History of Our Lady of Health, Harihar 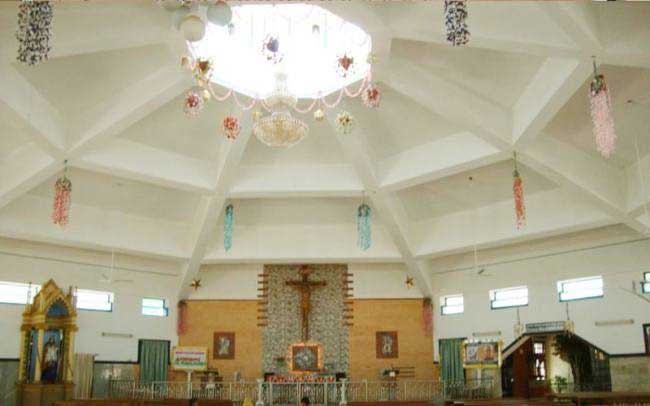 History has it from time immemorial that according to the tradition a Brahmin, while taking bath, accidentally fell into the swelling river Tungabhadra on whose banks Harihar in now situated.

From than onwards he dedicated himself completely to the service of Our Lady and his house to the glory of the Mother. Soon after his death, he was laid to rest in a place where his house existed. Later on that same house was converted into a church, which is situated on the banks of the River Tungabhadra. This Shrine has been frequented by the people of Karnataka, irrespective of caste, language and religion. No doubt, it can surely be called the “Vailankanni of Karnataka”

Harihar is a town situated in Davangere district of Karnataka. earstwhile Mysore Kings, followed by the British. Harihar though belonging to Mysore state, was part of Chitradurga Division. Later on in 1875 A. D. the British Government brought together a few adjacent villages under Hariher and formed it a taluk centre with the establishment of a taluk office. At present Harihar taluk has around 86 villages.

Bigot Beauclair – Born on July 21, 1804, he joined the MEP Society 6 August, 1829. He left for Pondichery on August 16, 1830 when still a Deacon only. He was ordained a priest at Pondichery on 28 May, 1831. In 1833, he was given charge of Srirangapatna. He built several chapels including Harihar and Anekal. He repaired the churches of Settihalli and built a presbytery at Hosur. Hr built a church at Mysore. In 1845, he built at Shoolay in Bangalore what was destined to be a seminary but ultimately became a school for girls. He prepared a blueprint for a seminary in Bangalore. In 1851, 1852  he constructed St. Joseph’s Church when he was given charge of the parish of saint Mary at Blackpalli. He founded there in 1853 or 1854 an orphanage for boys. He died in Bangalore on July 15, 1858.

Historical Illustrations Of The Holy Shrine

Fr. Anthony Simo in his book , “History of the Archdiocese of Bangalore” on page 38 illustrates as follows: In September 1839, Fr. Bigot Beauclair paid a visit to Harihar where he witnessed the pilgrimage of people to that place where a statue of the Blessed Virgin was much in veneration. There he heard the legend of the origin of that statue and what caused people to have such a great devotion to that image.

Afterwards in1888 another priest, Fr. Francois Jarrige, a French, having visited Harihar, recorded the events of the good works done by Mother Mary in his letter. Fr. A. M. Gabrier has recorded all these illustrations in his book titled “History of the Mysore Missions” (Ref. Pp88-89, Vol. 1).

Fame Of The Mother Mary Of Harihar 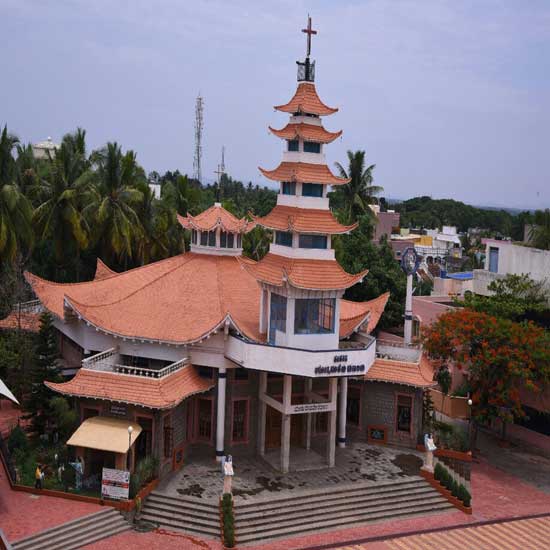 By now the fame of Harihar Shrine had spread far and wide. In Mysore Region, for the wonderful spiritual service done by no great  a missionery personality is Most Rev. Bp. Stephen Louis Sharborne  known as the Prince of the Mysore Mission who made pastoral visits in his vast territory. In November 1871, Blessed Sharborne from his headquarters Bangalore  made a pastoral visit to the far off  place i.e. Nagar earlier known as Bidanur. On his way back, he visited Chitradurga where he blessed a new church on 18 November, 1871.

From there he proceeded towards Harihar where he stayed for 3 days. From this, what is clear is that though there were no proper facilities in this tiny town , this  great Archbishop of the versatile Christian Mission stayed for the sheer reason of his great love  he had for the Mother  Mary.

Fr. Dayananda Prabhu in his book, “Mysore Sansthanada Kraisthara Ethihasa” in page 166 has vividly paraphrased about Blessed Sharborne. Growth Of Harihar As A Religious Centre Harihar being a small town had no dearth for devotion to Mother Mary though there was neither magnificent church nor a resident priest to cater to the spiritual needs of the people. By that time the fame of Harihar had reached its zenith.  A small chapel in the original place existed then. There were Christians in good numbers. But their spiritual care came under the jurisdiction of the parish of Sacred Heart, Shimoga. In the beginning, priests used to come for Mass. There are records to prove that the first baptism took place in Harihar on 27 July, 1847 and the first marriage ceremony of the parishioners of Shimoga took place at Harihar in the small chapel on 4 August, 1847.

These are found in the Baptism and Marriage records preserved in the Cathedral office, Shimoga. From 1870, the French missionery, Fr. Kleiner from Shimoga had to look after this parish. It is recorded that he used to offer Mass for the people of Harihar. The important celebrations were conducted at this shrine only to highlight its importance.

In the beginning of 1847 itself, the celebration of devotion to Harihar Mathe and dedication to her was much in vogue as scores of people would throng to this Shrine in this small town. People used to pray fervently. Gradually September 8 was chosen to celebrate her Annual Feast that being her Nativity. This has been going on without any interruption since then. In the initial ceremonies it was the practice that the image that saved the life of the Brahmin was taken in procession in prominent streets of the town.

He devotees from Arasikere who came annually for the Feast expressed their willingness to prepare a new chariot. Not willing to prepare an artificial chariot, they prepared  a unique one, not to be found elsewhere, with  Sevanthige flowers and offered it to the Mother. The chariot had its own uniqueness that none paralleled. Till now the chariot decorated with Sevanthige flowers is considered as the official and authentic one for the Mother Mary. Every year, for the annual feast such a chariot with the Statue in it is taken in procession.

200 years ago, Harihar was a tiny town. As traditionally handed down the ages, a poor Brahmin lived with his wife and two young children in dire difficulty. Poverty was rampant at home. His wife and children were ailing from incurable tuberculosis. Yet this Brahmin put up with the situation.

As the days passed by, one day early in the morning, in order to fulfill his morning ablutions, he got into the river Tungabhadra to have the holy dip.  It is handed down to us that he accidently slipped, and then losing control of himself he was eventually swept along with the currents. To his great dismay, he got caught in a swirl, not realizing what it was. All along he was struggling to come out of it, but to no avail.

Since then in memory of Mary and her Nativity, the feast of Our Lady of Health is being celebrated on 8 September with great religious fervour with thousands of people irrespective of caste, creed, language and religion. In the past, the decorated car with the original miraculous statue was taken in procession in the town but in course of time, the replica of old statue was used in place of original statue for the sake of safety.

Considering its spiritual importance to the Christian faith and its influence in building reconciliation and peace among people, it was proposed that this shrine be raised to the status of minor basilica. The process was initiated in the month of November 2018. The proposal was scrutinised at various levels beginning with the KRCBC (Karnataka bishops’ conference), CBCI and the Congregation for Divine Worship and the Discipline of the Sacraments.

Basilica of Our Lady of Health, Harihar, Karnataka, India is well connected with Bus Station, Railway Station and Airport facilities rest of the country.

Hubbali Airport, Karnataka, which is (147.7 Kms) from Basilica of Our Lady of Health, Harihar.

The nearest railway station is Harihar Railway Station which is just less than 1 Km from Basilica of Our Lady of Health, Harihar.

The nearest is Harihar Bus Stand which is just less than 1 Km from Basilica of Our Lady of Health, Harihar.