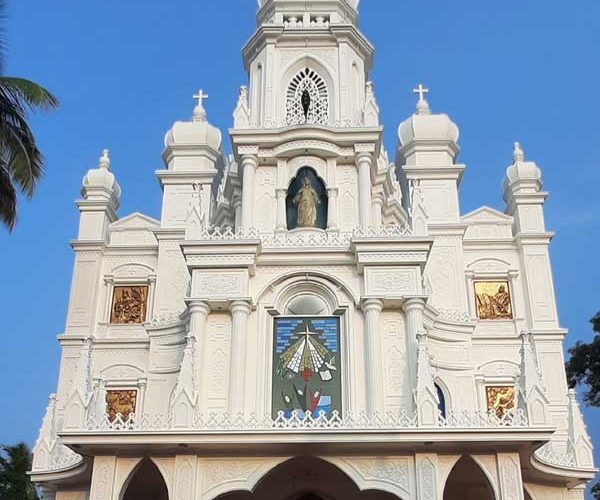 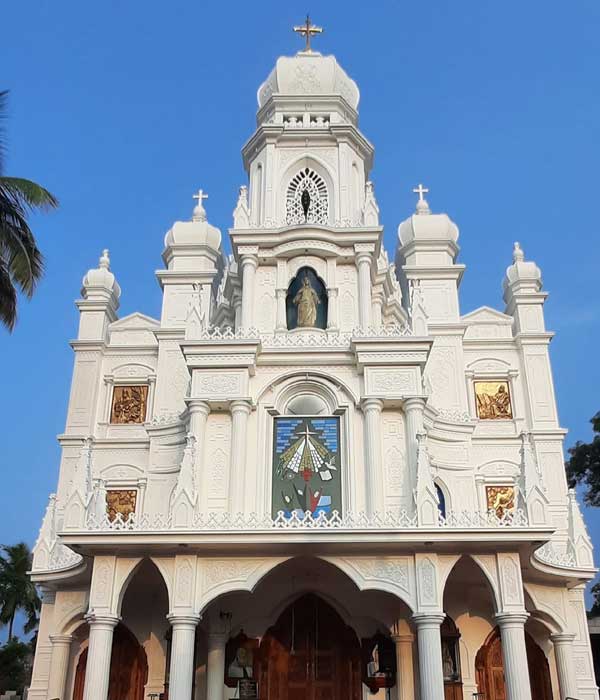 St. Mary’s Basilica, Mulagumoodu, Kalkulam, Kanyakumari, Tamilnadu, India is also called as Church of Our Lady of Nativity (St Mary’s Church) situated near Mulagumoodu in Trivandrum – Kanyakumari National Highway. St Mary’s Church stands for its tradition and cultural values.  The main people behind Mulagumoodu are Fr. Victor and his brother Fr. Eugene. They have made this place as what it is says today.

Pepper (Milagu) is grown widely in and around Mulagumoodu. So it is said the name Mulagumoodu evolved from pepper most of the people are formers and palmyra climbers. He is in a remote village.

St. Thomas one of the twelve disciples of Jesus Christ came to India in 52A2. He preached Christianity in Kerala and Tamil Nadu. He died as a Martiy in St. Thomas Mount, Chennai.

St Francis Xavier a Spanish Jesuit (1506 – 1552) missionary came to India. He propagates Christianity throughout the coastal areas of Kerala and Tamil Nadu and baptised many people to Christianity. He stayed few years in Kaniyakumari Dt. In 1544, he built two churches in Kottar and Thiruvithamcode which is 3.k.m away from Mulagumoodu.

Mulagumoodu was an unknown abandoned village at 1544, It was not a Catholic village though there were some Christians,. Fr, Victor experienced some attraction there. He started his missionary work putting his trust in Christ Jesus and mother Mary. He got the necessary permission from his Superiers and changed the face of Mulagumoodu in 1862. Fr. Victor purchased 40 acres of land in the Prime location of Mulagumoodu.

God Sent trust worthy servant of help. He is own younger brother, Fr. Eugene an O.C.D came over to India to join his brother. Both executed plans what God inspiring them. 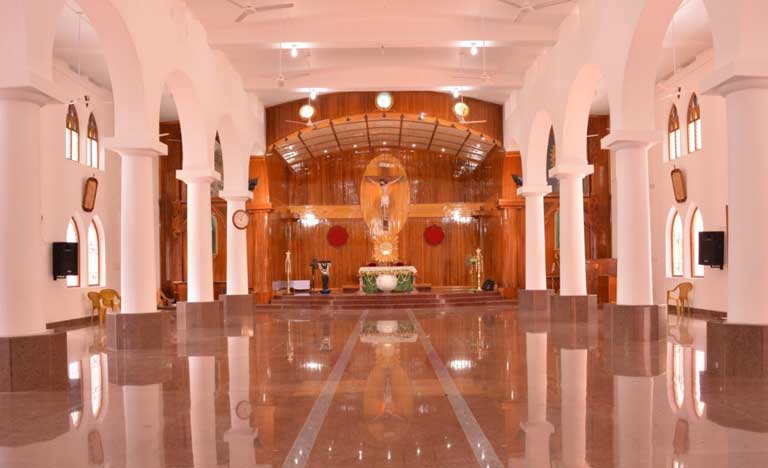 Fr. Victor OCD was sent to support and preach Christianity  in Thiruvithancode, the head quarters of Tranvancore  Kingdom. Placing Infant Jesus as the head and Mother Mary as Queen and Heaven, he proclaimed the gospel to the people.

In 1862 he started an orphanage for the people who became orphans through a deadly disease Cholera. The bacterial disease that transmits through contaminated water and foods had affected 1000 of people. Fr. Victor had opened the doors of his orphanage to accommodate the people without any hesitation. Days passed, the people coming to get shelter in orphanage increases, so Fr. Victor had sought Augustinian mission, Belgium and brought Sis. Marie Louise and Sis.Maria Ursula and founded Immaculate Cordis Maria (ICM) Convent.

Fr.Victor had made boundless improvements in Mulagumoodu and broke the untouchability act. The untouchables were forbidden from wearing sandals, use umbrella, wear dress and jewels of their choice. They were not allowed to live in houses with tiled roofs. They were not expected to ride their own vehicles. In that scenario he treated everyone equal, that was one of the remarkable stand he made and literally erased such untouchability concepts from the minds of the people. After all this tiredness work, Fr.Victor was taken by god on 27-07-1987 and buried in St Mary’s Church. Some of the amenities laid out by Fr. Victor.,

Founder of the convent

The good administration of his orphanages and service to the women folk demanded the service of some religious sisters, Fr.victor arranged to have the service of the order of St.Augustinion nuns. In 1891 the foundation stone was laid. It look about six years to complete the construction works. The Father and his brother Eugen themselves worked as masons and carpenters.Fr. Victor invited sisters Maric Louis and Maria Ursule from Belgium to take possession of the newly built convent .When they reached the founder was no more to service them.

In the year 1868 and 1888 people had fallen in the group of the epidenic of Cholera. In those days there were no medical facilities like today. So, many people Died of the disease. The epidemic increased the number of orphans and distibutes. So father victor started an orphanage for the poor, neglected children. They were given training in various jobs such as carpentry, lace works, metal works and tile works.

In order to get revenue to the orphanage Fr.Victor commenced a tile factory in 1883. Aceylon man paul Fernando was sent to Mangalore to study tile making. In those days only high caste people were allowed to get tiled roofs. Fr.Victor broke this old custom and allow all people to get their house tiled roofs. He brought a great Social change through his revalutionary sprit.

The first church was constructed in 1912 . It took eight years to complete the building works.
St Mary’s Church bell was brought from (France in the year 1891 by Fr. Victor. St Mary’s staticte which was made is a single piece of wood was also brought from Belgiuim by Fr. Victor. The painting picture of St. Mary 8” x 4” size which was at the right side of the alter Bishop Aloysius Maria Benziger 1905 – 1931 presented. The first post church Flag was donated by P.Cruzmichael contractor in 1932. The present 52 ft one was donated by J.V.S family in 2012

The first recognized portrayal of Mastyr Devasahayam Pillai which is ats the left side of the alter was drawn by artist B.K Kangan at Kanyakumari in 2008. 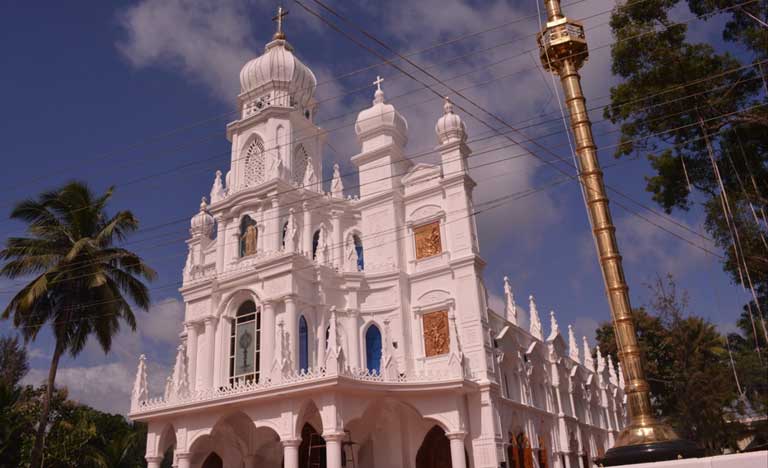 Other Attractive Places in the Church

As the Bibilical saying one who built his house in the rock is wise. Fr. Victor built a house on the top of rock which was in his campus. The area of the rock is eighteen cents a parocial house, a chaple and a bakery was also erected there.

Fr. Victor was not only a good missionary but also a great architect. Without using Cement and Steel Rods Fr. Victor constructed a five storey tower in his premises and fixed a lightning arrester which was brought from Europe at the top of the tower. After hundreds of years it stood like a monument in the newly started Infant Jesus College with I n 1888 Fr. Victor constructed 20 churches in our diocese.

The Bell using in St Mary’s church was bought from France by Fr. Victor in 1891. The sound of this church bell is very peculiar among the other churches. Also the statue of Virgin Mary placed in Chair car was brought from Belgium by Fr. Victor.

Annual Feast flag hosting will be held on 1st Friday of September and the 10th day will be celebrated as Annual Feast of the Church.

The nearest railway station is Mulagumoodu Railway Stop which is just less than 1 Km from St. Mary’s Basilica, Mulagumoodu.

The nearest is Mulagumoodu Bus Stand which is just less than 1 Km from St. Mary’s Basilica, Mulagumoodu.