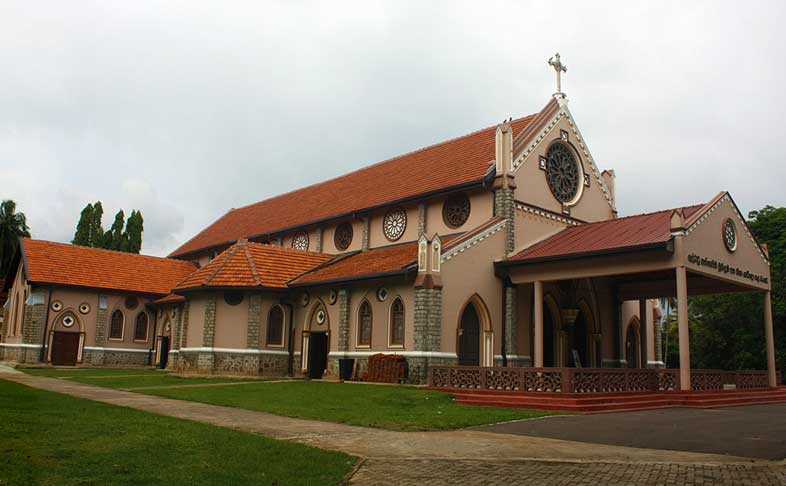 The St. Anthony’s Church or St. Anthony’s Shrine is the cathedral church of the Roman Catholic Diocese of Kandy in Wahacotte. The church is located in Wahacotte, in the north of Matale District, about 32 km (20 miles) from Matale and is dedicated to Saint Anthony. The church is one of the most sacred pilgrim places for Catholics in Sri Lanka and a national shrine. The Benedictine mission is attached to the church.

Considered to be one of the most important pilgrim sites for catholics in the country, people from all over Sri Lanka come to visit it at least a couple of times every year. It has also been given the title of a national shrine. The light coloured building is crowned with brick red tiled roof and the interiors are beautifully decorated with intricate elements. Enjoy a trip to this church and soak in its blissful atmosphere.

Wahakotte was known as “Wasala-Kotte” – Castle in the Fort. It is believed that there was a palace and a fort, where the present church is situated, the village was so called, because it protected the palace, traces of which are still visible. There is another legend to say that “Waha”-poison; “Kotte” – pillow; means poisonous pollow because a queen had committed suicide after hearing of her husband’s death at war.

History records that when king Dutugemunu defeated king Elara, in 164 B.C. he had built a small fortress at Wahakotte. There are still some ruins of ancient buildings on a rocky-hill called “Maligatenna” – Palace-field.

These ruins show that Wahakotte was once a prosperous town with a fort, ramparts, a moat and thorough fares, where sub-kings lived. One can see Dambulla Rock Temple to the north from Maligatenna. The Ceylon Alamanac records that there were ruins of “Rangalle Nuwara” and a Hindu Kovil – “Pattini Devalaya” in the woods close by.

Saint Anthony’s Church, Wahakotte the history records that the first christian Monarch – Yamasinghe, adopted son of Karalliyadda Bandara, who later became Don Phillip after embracing christianity in Goa, India, was received by some rebels from Kandy and was crowned at Wahakotte by the Portuguese.

Saint Anthony’s Church, Wahakotte is also recorded that Don Francisco Wijekoon, who organised the Kandyan rebels against king Rajasinghe, too, was present on this occasion.

The people of Wahakotte are slightly fairer in complexion, compared to other rural people in the area, though there are also very dark people among them. Because of this complexion neighbouring villagers still refer to them as “Pruthugeesi” or the decendants of “Parangi”. Some had Kandyan names mixed with Portuguese hames, like Don Juan Wijeratne or Dona Issabella Ekanayake.

When the Dutch captured the areas that were under the Portuguese rule, they confiscated all catholic institutions, churches, schools and religious places, chased away the Catholic priests and banned all religious activities. 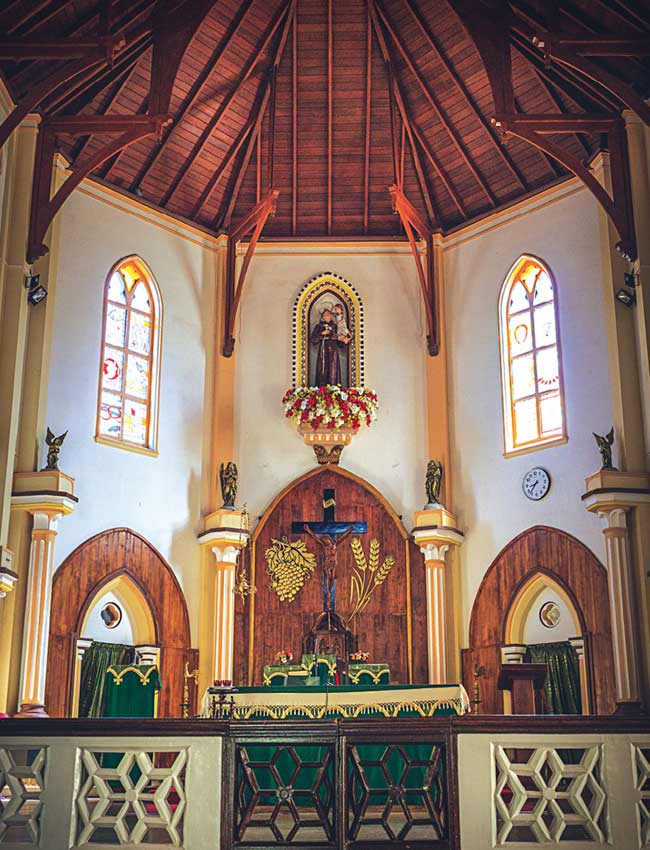 There are ruins of some ancient buildings on a rocky hill called Maligatenna (palace field) or Bagankotte. Wahakotte is so situated that one can observe the approaching enemy, even as far as the rocks of Dambulla towards Anuradhapura. However, there were royal connections to this village from the fact that some still pay a tax to Dahawa temple for the use of their paddy-fields.

Saint Anthony’s Church, Wahakotte famous historian S.J, R, Rodrigo, begins his accounts on the history of Wahacotte with reference to 1582 when Rajasinghe of Sitawaka waged war against Kandy. At the time of this war, Karaliyadde Bandara fled to Trincomalee and died there of smallpox. Before his death, he became a Christian and entrusted his daughter Dona Katharina and Yamsinghe to the Portuguese.

Yamsinghe too became a Christian at Goa under the name of Don Phillip. When the Kandyan began to oppose king Rajasinghe, Don Philip returned to Sri Lanka and was crowned at Wahakotte by the Portuguese. After the death of Don Philip, Konappu Bandara seized the Kingdom of Kandy forcing Don Juan, the son of Don Philip, to flee. He fled, first to Wahakotte and via Goa to Portugal, where he became a priest.

Konappu Bandara married Dona Katherina in order to consolidate his position as a king. Wahakotte was frequented by all those who had contacts with the Portuguese during this period, due to the fact that the route from Kandy to Trincomalee and Mannar was through Wahakotte. 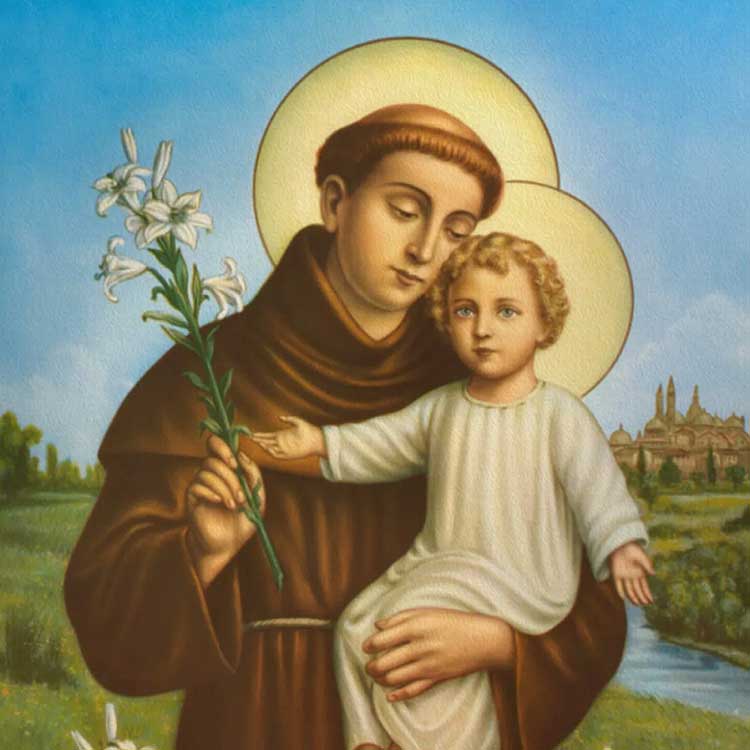 The Miraculous Statue of St. Anthony

Saint Anthony’s Church, Wahakotte enshrining a Miraculous Statue of St. Anthony of Padua (Italy), is among the important places to visit in Kandy. St Anthony is a Catholic Saint, born in 1195 in Lisbon (Portugal). At the age of 15, he entered the Augustinian Order and lived like a monk. But desiring to be a missionary he later joined the Franciscan Order and went to Morocco. Due to ill health, he was forced to return to Italy, where he became a famous preacher and wonder-worker.

There are thousands of recorded miracles attributed to St. Anthony during his lifetime and also after his death. He died in Padua, on 13th of June 1231 and Catholic celebrates his ‘feast’ on that day. Even after seven centuries, his tongue is miraculously preserved at Padua for public veneration as a sacred object. Eve non-Christian acknowledge that they have received favour by invoking his help.

The hands of Saint Anthony’s Church, Wahakotte had protected the people in the area over the past 400 years through the miraculous power. In relation to St, Anthony they have ancient handwritten prayers and hymns the village, crops, exorcise and invoke divine assistance. Often the Muhuppu (the chef laymen elected by the parish council especially to lead prayers and hymns and to be responsible for parish activities) recite these prayers as a special privilege and as a sign of living under the protection of St. Anthony.  There are instances that help of St. Anthony is sought in order to inflict damage to others.

The name “Wahakotte” means, according to some villagers “the castle gate” (Wasala Kotte) and the village were so-called because it protected a palace, trace of which are still visible. Some others say that “Wahakotte” means poisonous pillow (waha-poison; Kotte=pillow) as a queen had committed suicide after hearing of her husband’s death at war. There is a legend to say that in 194 BC when King Dutugemunu defeated Elara, he built a small fortress at Wahakotte.

The Annual Feast of Historic Wahakotte Church will be held on June 17th with a festive high mass.

Sigiriya Airport is the nearby airport to the Shrine.