Shrine of the Virgin of the Rosary of Pompeii, Campania, Italy 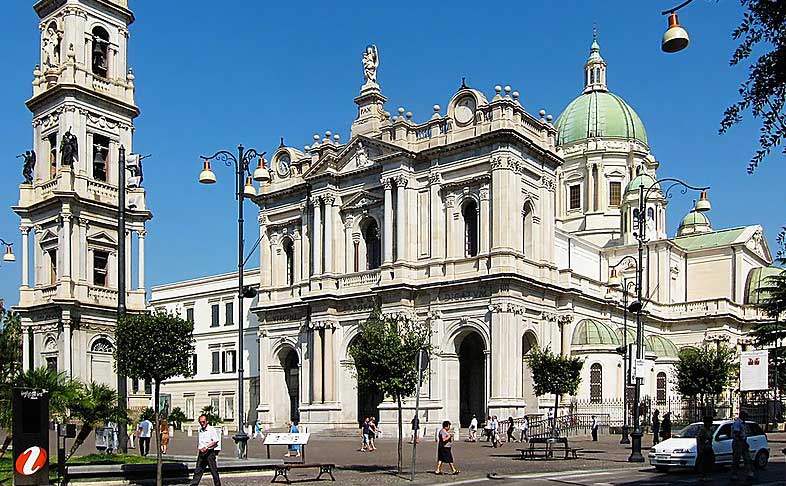 Home » Shrine of the Virgin of the Rosary of Pompeii, Campania, Italy

Shrine of the Rosary of Pompeii, Campania 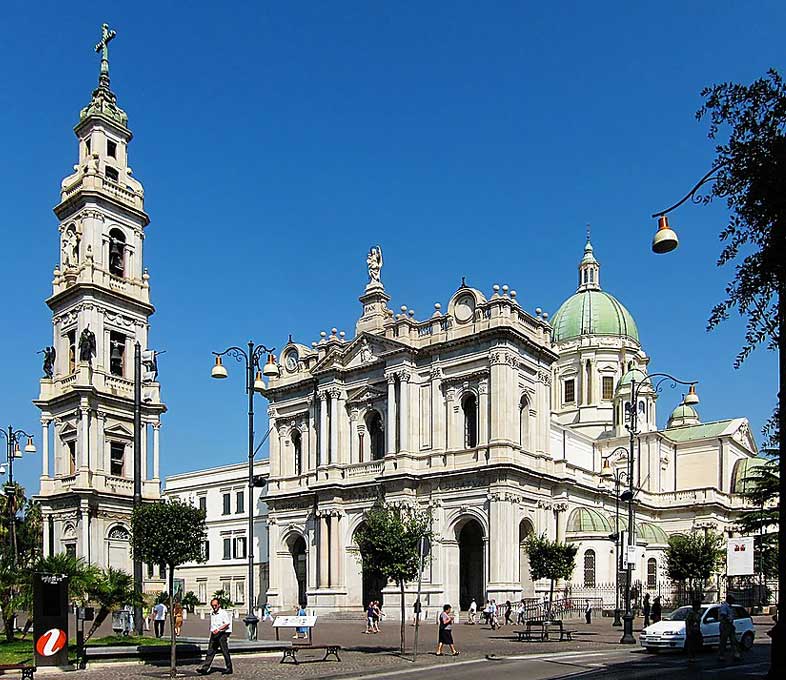 The Pontifical Shrine of the Blessed Virgin of the Rosary of Pompeii (Italian: Pontificio Santuario della Beata Vergine del Santo Rosario di Pompei) is a Roman Catholic cathedral, Marian pontifical shrine and minor basilica commissioned by Bartolo Longo, located in Pompei, Italy. It is the see of the Territorial Prelature of Pompei.

Bartolo Longo started restoring a church in disrepair in October 1873 and promoted a festival in honor of Our Lady of the Rosary. In 1875, Longo obtained a painting of Our Lady of the Rosary from a convent in Naples and raised funds to restore the image so as to locate it in the church. Miracles began to be reported and pilgrims began flocking in droves to the church. Three hundred people of the area pledged a penny a month for the work.

Bartolo Longo was encouraged by Giuseppe Formisano, Bishop of Nola, to begin the construction of a larger church the cornerstone being laid on the 8 May 1876. The church was consecrated on the 7 May 1891 by Cardinal Raffaele Monaco La Valletta, representing Pope Leo XIII. Pope Benedict XVI presented his sixth Golden Rose to the shrine on the 19 October 2008.

The Pontifical Shrine of the Blessed Virgin of the Rosary of Pompei, or as it is called in Italian “Santuario della Beata Vergine del Rosario”, is a Roman Catholic cathedral in the new part of the city Pompeii. The cathedral is about five minutes away from the stratovolcano “Mount Vesuvius” and was completed in the second part of the 19th century.

The cathedral is a world known pilgrimage church that fits about 6,000 people. In addition, there is a Campanile, an independent bell tower, next to the basilica which offers a magnificent view on the platform on top of the 80 meter high tower. The entry to the basilica is without charge, there is however a small fee to take the lift to the viewing platform.

History of Shrine of the Rosary of Pompeii, Campania 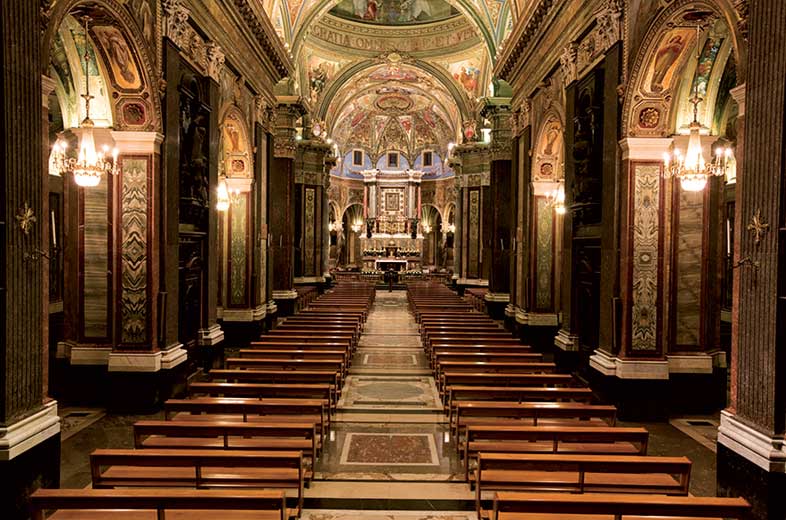 The Sanctuary was built at different times. The original, in the shape of a Latin cross with a single nave, was built between 1876 and 1891, based on a project by Professor Antonio Cua of the University of Naples, and measured 420 m2. To accommodate the very numerous faithful, between 1934 and 1939, the Sanctuary was enlarged, passing from one to three naves, maintaining the Latin cross structure.

The project was conceived by the architect and priest Monsignor Spirito Maria Chiapetta, who also directed the works. The two minor naves, which have three altars on each side, extend right behind the apse in an ambulatory enriched by four semi-circular chapels. The set of constructions is harmonized by contrasting structures, in perfect balance of masses, designed so as not to undergo displacement effects for any cause. The interior, of 2,000 square meters, it can accommodate about 2,000 people. The total volume is 40,000 meters.

The painting of “Our Lady of the Rosary” with its bronze gilt frame is presented to the pilgrims on the high altar. The venerated painting depicts the Virgin Mary and Child Jesus presenting rosaries to Saint Dominic and Saint Catherine of Siena. Originally bought by Dominican priest Alberto Radente for eight carlini in Naples, it was offered to Bartolo Longo on the 13 November 1875 for the church he was building in Pompei.

An attempt was made by an amateur to restore it, and it was placed in the church on 13 February 1876, the foundation day for the Confraternity of the Holy Rosary there. In 1880 the famous Italian painter, Federico Madlarelli, offered to restore the image. It was again finally restored by Vatican artists in 1965.

Bartolo Longo composed the “Novena of Petition” in July 1879, testing it by himself while he suffered from typhoid fever. The text was inspired by a daily vision of a miraculous portrait of Our Lady of the Rosary, to which the Novena was first dedicated in Pompei.

The full Prayer consists in a daily pronunciation of at least three decades (three Holy Misteries) of the Rosary each day followed by the Novena. It takes 54 days of time, without interruption. 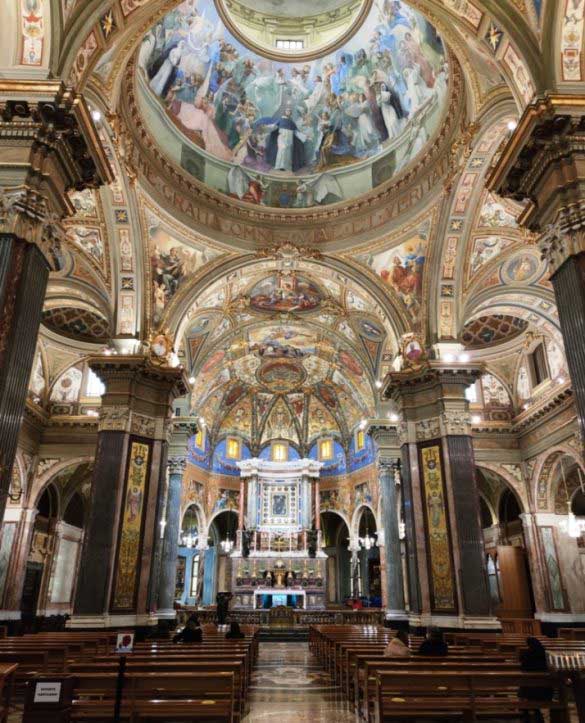 To accommodate the increasing numbers of pilgrims, the sanctuary was expanded between 1934 and 1939 from one to three aisles, keeping its Latin cross plan. The project was ordered by Prelate Antonio Anastasio Rossi and designed by the architect-priest Monsignor Spirito Maria Chiapetta. Each new aisle has three altars on each side. The new building with its 2,000 square metres (22,000 sq ft) can accommodate up to 6,000 people.

The 80-metre (260 ft) bell tower built between 1912 and 1925 was designed by Aristide Leonori, assisted by his brother Pio Leonori.

Our Lady of the Rosary of Pompeii 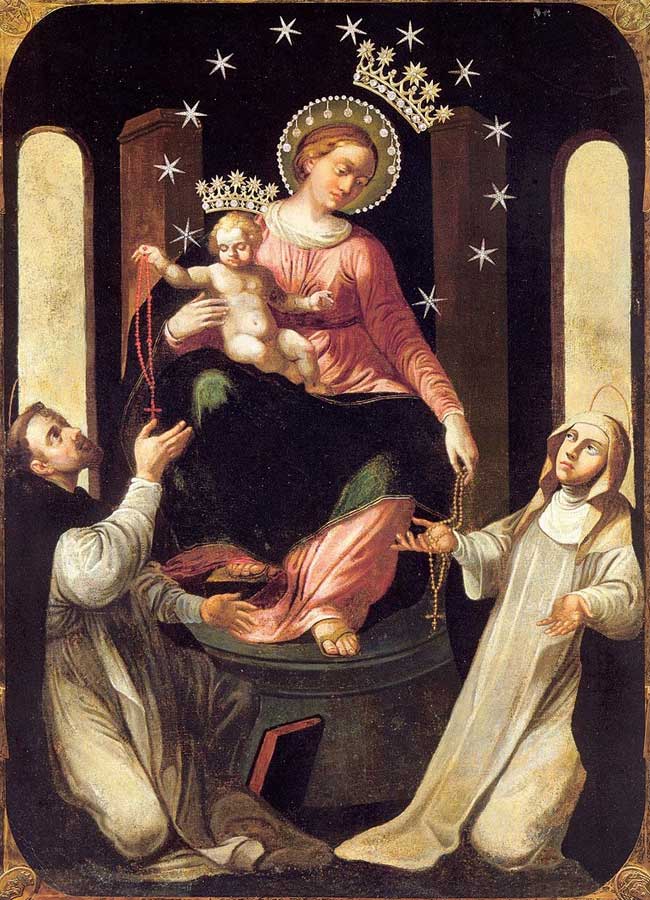 The image, also known as of Our Lady of Pompeii, represents Our Lady of the Rosary as Queen of Heaven, who holds her Son, Jesus, as they hand rosaries to Saint Dominic and Saint Catherine of Siena.  St. Dominic holds and contemplates the crucifix, while St.  Catherine of Siena gazes in awe.  The image is a beautiful reminder of how the Blessed Mother has wrapped countless Catholics in her love and prayers.

The missionary image of Our Lady of Pompeii made the rounds of various dioceses in the USA strengthening the faith of the people, evoking confidence in Christ and promoting devotion to the Rosary.

Blessed Bartolo Longo, who founded the Shrine of Our Lady of the Rosary in Pompeii, Italy, is credited with enshrining the miraculous image in a small chapel there in 1875.  On October 21, 1979, Pope John Paul II visited Pompeii as part of a national pilgrimage to Our Lady of Pompeii.  On October 26, 1980, Barrtolo Longo was beautified by Pope John Paul II and called “the Man of the Madonna” and “the  Apostle of the Rosary”.

On October 7, 1571, the battle of Lepanto took place.  Pope St.  Pius V asked Europeans to pray for Our Lady’s intercession for a favorable outcome.  The reason St. Pius V instituted the feats of Our Lady of the Rosary on October 7 is because “the Virgin Mary of the Rosary made us victors”. 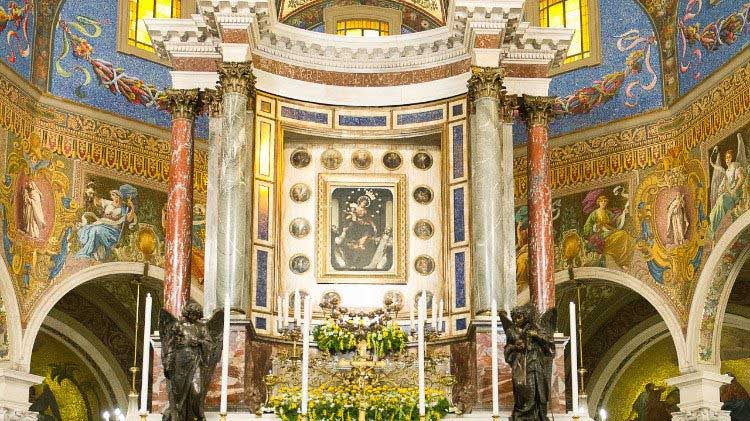 Shrine of the Virgin of the Rosary of Pompeii,
Piazza Bartolo Longo, 1,
80045, Pompei NA, Campania, Italy.

Naples International Airport in Napoli NA, Italy is the nearby Airport to the Shrine.