Shrine of Our Lady of Namacpacan, Luna, La Union, Philippines 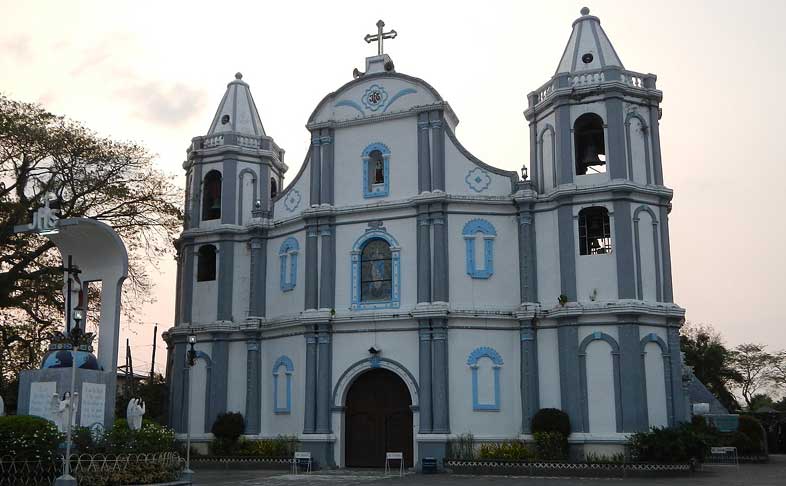 Shrine of Our Lady of Namacpacan, Luna 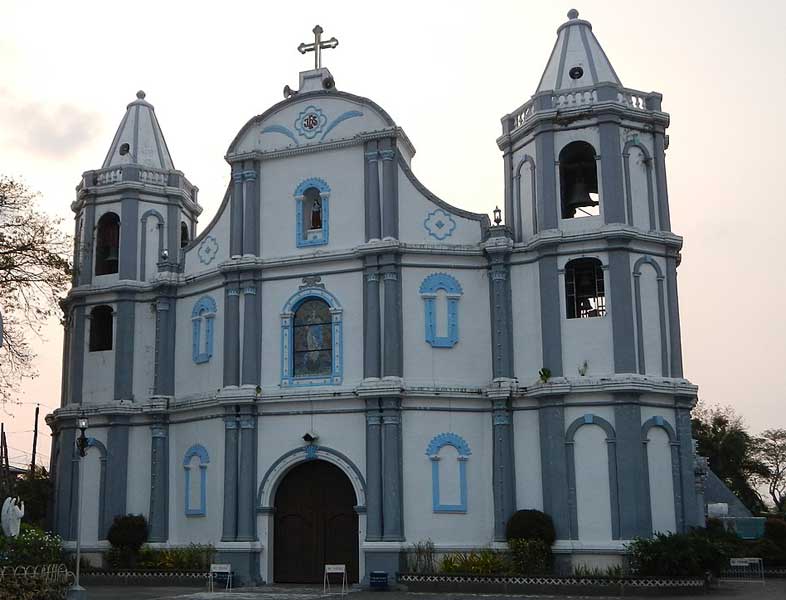 The Namacpacan Church also known as the Santa Catalina de Alejandria Church is a Roman Catholic church located in Luna (formerly Namacpacan), La Union, Philippines under the jurisdiction of the Roman Catholic Diocese of San Fernando de La Union. Formerly called as Luna Church, the church is placed under the advocacy Saint Catherine of Alexandria in 1690 and known for its devotion to the Our Lady of Namacpacan.

The church was declared a National Cultural Treasure by the National Museum of the Philippines.

History of Shrine of Our Lady of Namacpacan, Luna 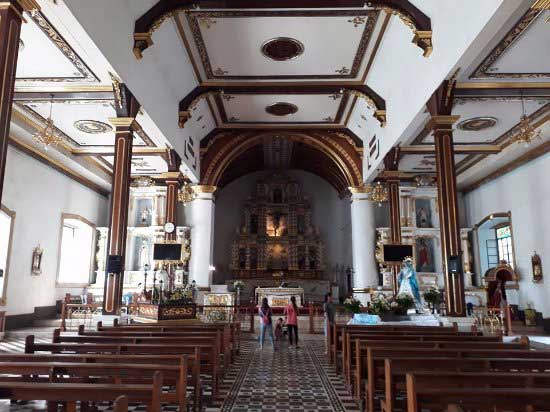 Since 1587, Namacpacan was a visita of Purao (presently known as Balaoan). In November 25, 1690, the town was founded and a parish under the advocacy of Saint Catherine of Alexandria was canonically erected. The first church of Namacpacan was built under the supervision of Father Mateo Bustillos, the parish priest from 1695 to 1697. The original site of the church was in Darigayos, a barrio of Namacpacan and was transferred in 1741 to its present site. The image of the Our Lady of Namacpacan was enshrined in the church in 1871.

The church was reinforced with masonry and galvanized iron roof. It was heavily destroyed by an earthquake in 1854. Through the efforts of Father Marcelino Ceballes, the church was restored and the convent was widened in 1876.

Like other Philippine churches built in earthquake-prone areas, Namacpacan Church is classified as an Earthquake Baroque church with thick walls and buttresses connected to a brick exterior stairway of different designs and shapes. A ceremonial archway or capilla possa can be found at the church’s entrance. Its 1872 white and yellow facade falls under the Baroque style with the presence of rounded pediments.

Three sets of two pairs of engaged columns and two sets of single columns along with twin belfries adorning the façade. A wooden altar, Spanish-era stone pulpit and a wood relief of the Baptism of Christ, probably polychromed, can be found inside the church. Its convento is now used as a school. 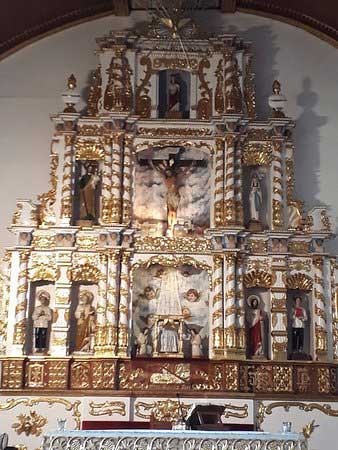 The Shrine showcases splendid white, pale gray and light blue facade with its original walls composed of bricks and stones almost completely preserved. It is classified as an Earthquake Baroque church with unique thick step buttresses that leads up to the roof. Its 1872 white and yellow facade falls under the Baroque style with the presence of rounded pediments.

Three sets of two pairs of engaged columns and two sets of single columns along with twin belfries adorning the façade.A wooden altar, Spanish-era stone pulpit and a wood relief of the Baptism of Christ, probably polychromed, can be found inside the church.

It also has a thick and unique gate with statue of re-enactment of the crowning of the Our Lady of Namacpacan on its roofing.

Namacpacan Church was also declared a National Cultural Treasure by the National Museum of the Philippines in 2001. 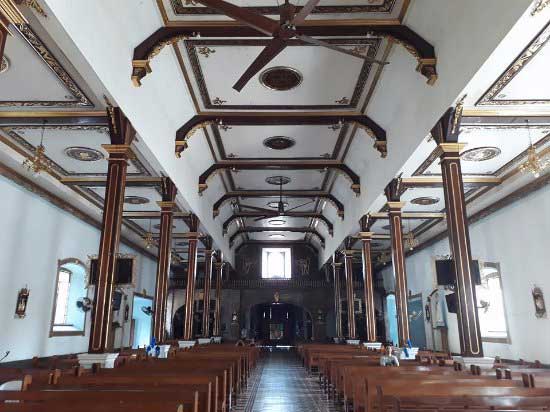 November 25, 1690 : Namacpacan was declared a town with St. Catherine of Alexandria as its Patroness. The original site of the town was in Darigayos but was transferred to its present location in 1741.

1773 : The church made of bamboo and wood with thatched roof was destroyed

1786 : A new stone and brick church and convent was built

1871 : A storm forced a ship bringing an image of the Blessed Virgin Mary to Vigan, Ilocos Sur to seek shelter at Darigayos. Our Lady chose to stay and later became known as “Our Lady of Namacpacan”.

Part of the church damaged by strong earthquake was repaired.

October 18, 1906 : Namacpacan was renamed “Luna”. Our Lady of Namacpacan  retained its named.

November 24, 1959 : Our Lady was canonically crowned as the “Immaculate Conception of Our Lady of Namacpacan”

November 24, 2001 : The church was renovated, reblessed and rededicated, and 1959 coronation of Our Lady was re-enacted.

Our Lady of Namacpacan: The Queen Found Her Home 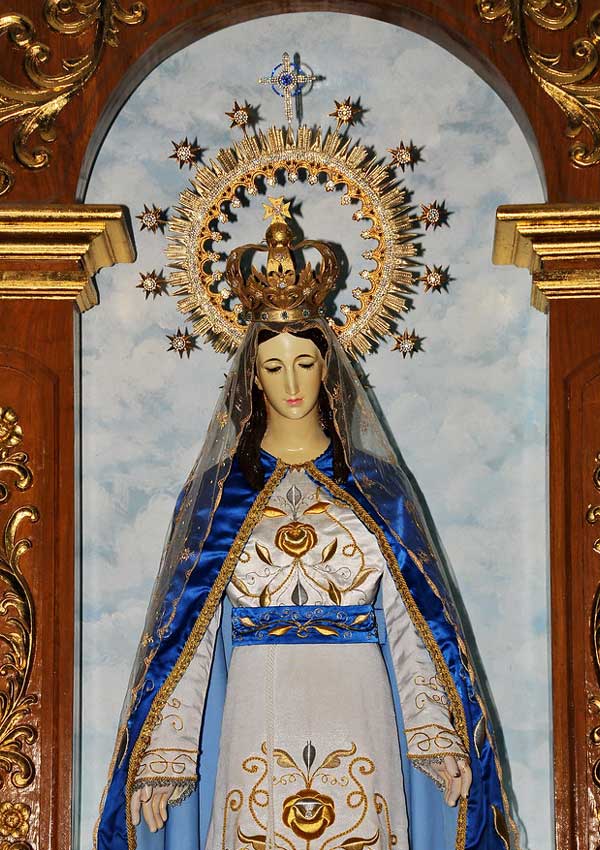 The wooden image of the Blessed Virgin Mary venerated as the Our Lady of Namacpacan (locally known as Apo Baket) in Luna was ordered from Spain by an Augustinian priest assigned in the Immaculate Conception Seminary in Vigan in 1871. While on its way to Vigan, the galleon ship from Mexico carrying the image of our Lady took shelter in Darigayos due to a storm.

When the sea was calm, they resumed their journey but strong winds forced them to return to the port of Darigayos. The captain of the ship decided to send the image by land and it was temporarily placed in the church’s convent. However, the image was too heavy to be transferred onwards overland. Father Camilo Naves, an Augustinian priest, interpreted the incident as meaning that the image of the Virgin Mary wished to be enshrined in the town of Namacpacan. Father Marcelino Ceballos, then parish priest requested to the Augustinian priest to give the image to the town.

Upon the agreement that the people of Namacpacan would reimburse all expenses incurred during the image’s journey from Spain, the rightful owner gave the image to the town. The people welcomed the Virgin to town with feasting, and enshrined it on an altar in the northern part of the church. The image was canonically crowned on November 24, 1959 through a special decree issued by Pope John XXIII through Apostolic Nuncio to the Philippines Salvatore Siino.

The image of the Our Lady of Namacpacan, standing 6 feet 4 inches (1.92 m) tall, is the tallest-known Marian image in the Philippines and is known as the patroness of Ilocano travellers.

The Miracles of Our Lady Apo Baket of Namacpacan 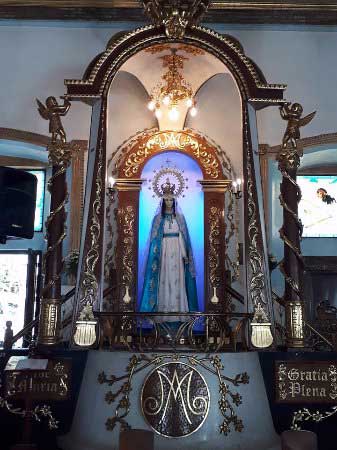 Rosa Roldan is a thirteen-year-old who was born lame. She claimed that Our Lady came to her home and restored her ability to walk. She said that one day, an old woman knocked on her door asking for drink and food. Rosa let her come in and told the old woman to help herself to the jar and get some leftover food in the kitchen.

The old woman drank, water trickling from the cup, falling on Rosa’s feet. Before the old woman left, she told Rosa to meet her at the church   altar. When she had left, Rosa began to walk. When she came to the church, she recognized the Statue of Our lady as her visitor. Since then, Rosa led a moral life, healing the sick and praying for the fishermen to catch more fish.

In early 1900 Tribal families from the Mountain Province came to Luna for baptism. They claimed that a tall beautiful lady had invited them there. After seeing the image in the church, they said that it was the same lady who came to the mountains who gave them food and purchased blankets from them. In return, she asked them to come to Luna for christening. When they came nearer, they saw the blankets she bought from them, laying at the foot of the altar.

Shortly before the death of Pope Pius XII, he saw Our Lady of Namacpacan in his dream. Upon waking, he asked the Vatican staff where Namacpacan was. Since the image was in Luna, a remote town in the Philippines, no one could provide an exact answer. It was only after the pope’s death, when the request for canonization was raised by the local church to the papacy, was the answer obtained.

The town’s name was changed to Luna, in honor of the national heroes, Antonio and Juan Luna, whose mother is a native of the place. Presently, Luna’s boundary arch proudly announces, “Welcome to Luna, Shrine of Our Lady of Namacpacan.”

Several miracles attributed to the Virgin of Namacpacan are widely known, including the healing of a young girl named Rosa Roldan who was unable to walk since birth. Before Pope Pius XII died on 9 October 1958, he reportedly saw the Blessed Virgin Mary enshrined in Namacpacan in a dream. He asked where Namacpacan was, but none of his staff were aware of the place’s existence; the answer was only revealed after the pontiff’s death.

Located beside the church is the Museo de Nuestra Senora de Namacpacan that houses the different capes and attires worn by Apo Baket since its arrival in 1871. Other artifacts and religious relics and articles are also exhibited in the museum. There is also a religious store infront of the museum were devotees and tourist can shop for religious articles and souvenirs.

Annual Feast Day of Our Lady of Namacpacan is celebrated every November 24 and pilgrims from Ilocos region and other parts of Luzon, Metro Manila and the rest of the archipelago would visit her shrine to join the solemn festivities.

The Shrine of Our Lady of Namacpacan,
Namacpacan Road, Luna,
2518, La Union, Philippines.

Lingayen Airport is located in Pangasinan, Philippines is the nearby Airport to the Shrine.