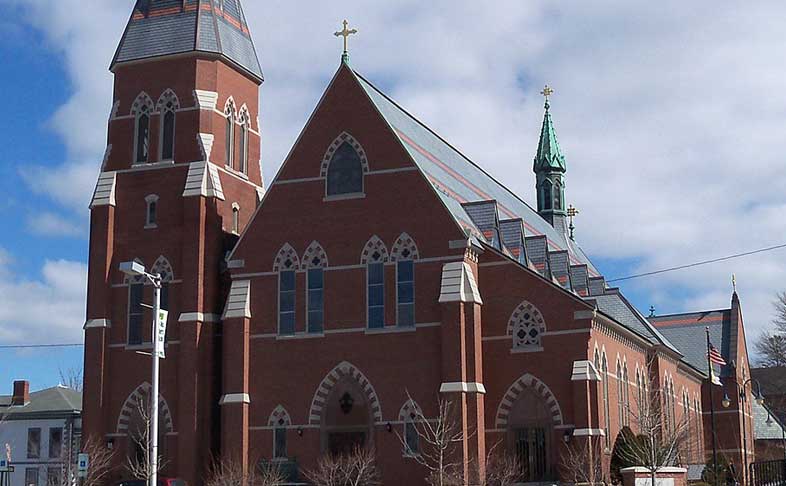 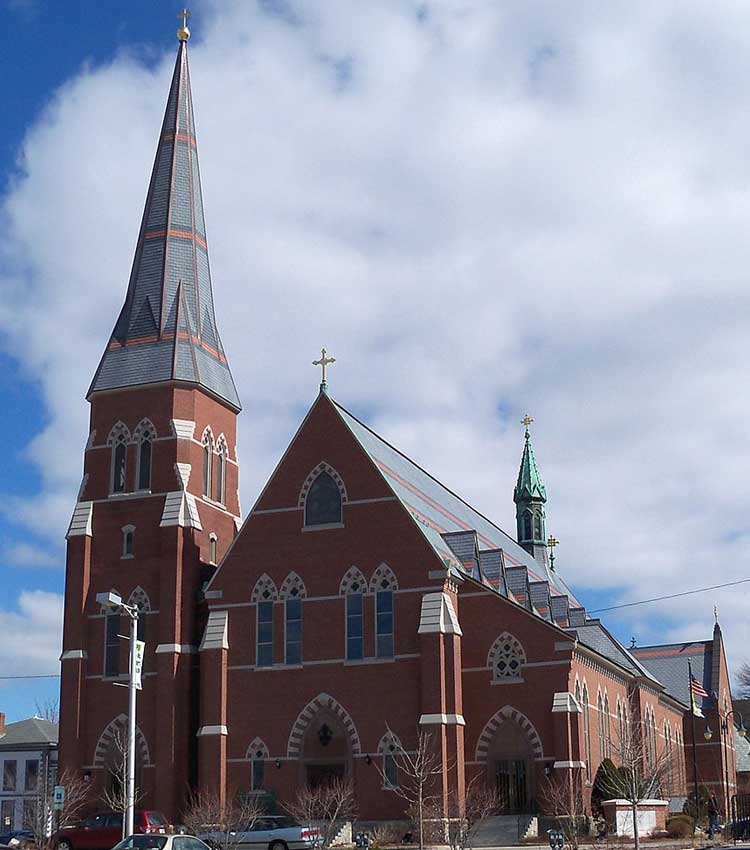 In the Catholic Church, Saint Joseph Cathedral, Manchester stands as both an affirmation and a reflection of the spiritual power which the Church represents among its people, a power embodied in its bishops. It is the place where one expects to find in the bishop the fullness of the priesthood, reflecting environmentally a sense of solemnity and the evocation of the continuity of apostolic succession. The cathedral is also the people’s church. There they find a gathering place to which they come as affirmation of the human community they represent.

For more than 150 years, St. Joseph Cathedral has responded to this challenge. It is here at the cathedral that the Bishop of Manchester exercises his teaching and ministerial authority. It is the site of the ordinations of deacons, priests and bishops, and major celebrations such as the Chrism Mass, celebrations of the Jubilees of religious ministering in the diocese, the Rite of Election and the Red Mass.

Built in the year 1869, Saint Joseph Cathedral, Manchester is known as one of the best historic churches in the city. Designed by Patrick C. Keeley, the church was built for the numerous Irish immigrants that lived in the area. Today the Roman catholic church is still an active place of worship and sees more than 700 worshipers on a weekly basis. Performances by various musical choirs also take place here often. Whether you are feeling religious or just want a glimpse of history, then a visit to St. Joseph’s Cathedral won’t let you down. 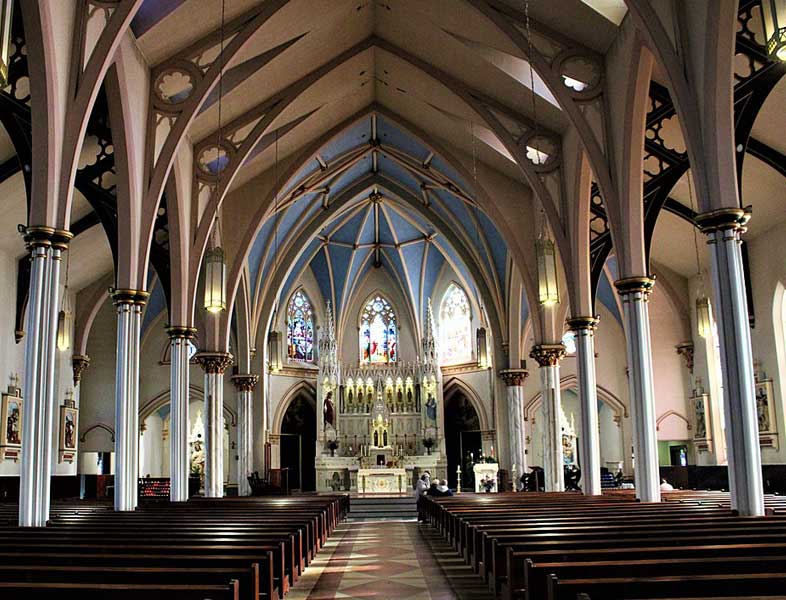 The church was founded in 1869 to serve the needs of Irish immigrants. Pope Leo XIII established the Diocese of Manchester in 1884, and St. Joseph’s parish became the cathedral that same year. The building has undergone several renovations and expansions since. In 1968, the high altar, Stations of the Cross, and many other decorations were removed according to the fashion popular after the Second Vatican Council.

After the Civil War, the population of Manchester had grown and the city was in need of another Catholic Church. Fr. McDonald chose Patrick J. Keeley, an architect from Brooklyn, to design “a house in which his people could worship their God in dignity, in comfort and with a sense of pride.” The finished product was a church which fit in with the many brick buildings of the Amoskeag Mills where the parishioners worked many hours. The church was built with a 170 foot high bell tower and steeple, which would raise hearts from the drudgery of daily work to thoughts of Heaven.

The style of the church was Victorian Gothic, a style so common in Europe at the time. It was built to be a large church, wide for its length, and where the faithful could feel close to the source of their spiritual life, the Bread of Life and the preaching of the Word. The work of building St. Joseph’s was done by local laborers and artisans under the direction of local contractors. In its construction the parishioners were able to express their pride, very often coming to work on the construction after spending a full day in the mills.

Saint Joseph Cathedral, Manchester that we enjoy today was solemnly dedicated on April 18, 1869 with much pomp and ceremony, presided over by Archbishop Williams, the Archbishop of Boston. The local newspaper spoke of the church as the largest and most beautiful church in the State of New Hampshire, built at a cost of $70,000, and could accommodate 3,000 people! These numbers can certainly make us chuckle as we think about the cost of building a church like this today and to imagine that many people packed in the Cathedral!

As you look around you will also see the effects of time, especially the cracks and stains on the ceiling and walls. In this 150th year please consider a gift to the Restoration Fund. It is our hope to continue the restoration of St. Joseph’s that was begun and to restore this temple for ages to come.” 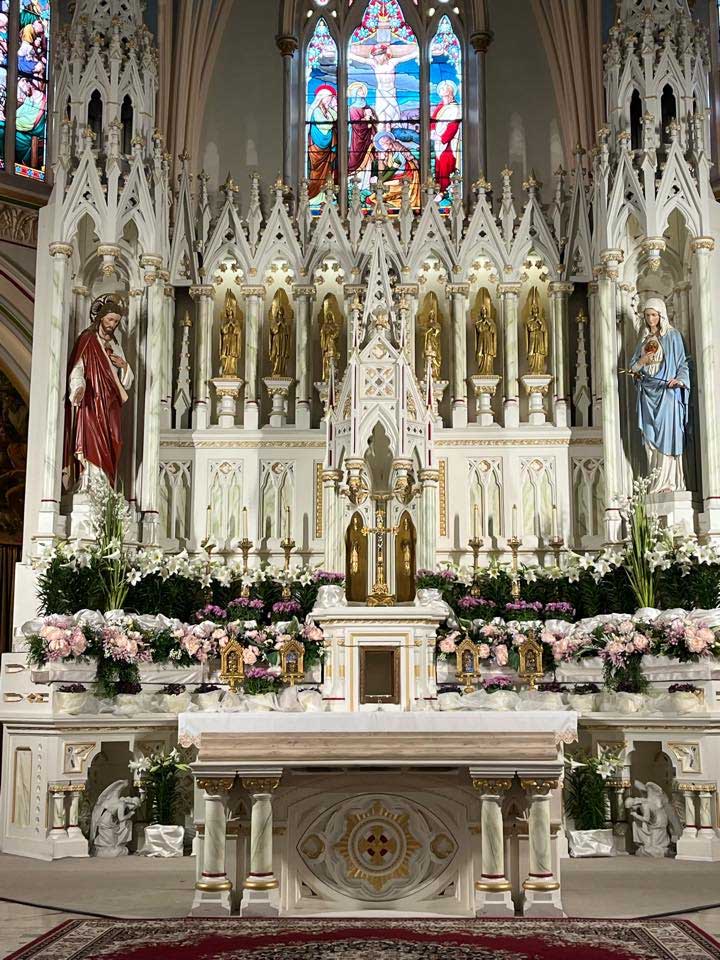 1862 – Purchase of land at the corner of Lowell & Pine streets for the purpose of building a church. The parcel was purchased by Father McDonald of St. Anne’s parish for $5,025 and only included the parcel for the church. It did not include the land where the chapel, cemetery, and rectory are located.

1866 – Patrick C. Keeley of Brooklyn, NY is chosen to design the church.

The architect was paid $1,500 for his work on Saint Joseph church. Mr. Keeley, who was born in Ireland, was well known for his work in designing churches. During the years between 1847 and 1892, Patrick Keeley designed 16 Catholic cathedrals and an estimated 500 to 700 other churches. His style is described as “neo – or Victorian Gothic, a decadent adaption of medieval architecture that became widespread in both Europe and America in the 19th century.”

Total cost for the building the church, as recorded by Father McDonald, was $56,498.81. The largest expenses were attribued to $21,443.54 paid to the carpenter (Alpheus Gay) and $16,846.79 paid to the mason (H. Dickey). Other notable expenses included 3 wooden altars for $1,097 and payment on the organ for $3,000. Much of the work in building the church was done by the parishioners who, after finishing work in the mills, contributed their services to building the church. They came directly from the mill and their children brought their supper so that they could work in the daylight.

April 18, 1869 – Saint Jospeh Church is dedicated by Rt. Rev. J.J. Williams, archbishop of Boston.  Rev. John O’Brien is appointed as the first Pastor. The Manchester Daily Union reported that the church was filled to capacity (between 1700-1800 people) and the grand organ sounded the introduction of Mozart’s Twelfth Mass. The homily was preached by Bishop Bacon of Portland – the text being from the 42nd Psalm, “I will go to the altar of God, to God who giveth joy to my youth.”

As pastor, Fr. Bradley completed and opened the St. Joseph School for boys and enlarged the girls’ school. Fr. Bradley took an active interest in teh financial matters of the parish. Three months after his arrival, he held a fair which realized a profit of almost $5,000. 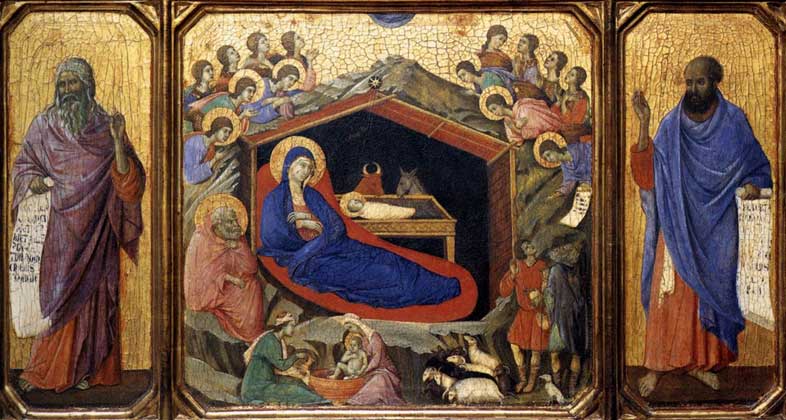 April 15, 1884 – Formation of the Diocese of Manchester; Saint Joseph Church is selected as the Cathedral of the Diocese. Father Bradley is chosen as the first bishop.

June 11, 1884 – Denis M. Bradley  is consecrated as the first bishop of the Diocese of Manchester.

At the age of 38, Bishop Bradley was the youngest bishop in the United States. The ordination was attended by the Most Rev. John J williams, Archbishop of Boston and the consecrating prelate, four additional bishops and 180 priests.

Among the first works demanding Bishop Bradley’s attention was the parish property.  On the property where the chapel and cemetery now reside was originally a privately owned house.  The property was purchased in 1885 and the house was moved to Amherst Street as part of the Sacred Heart Hospital.  The existing rectory (what is now the Library) was relocated to the southwest corner of the lot, and construction began on the new rectory.

1892 – Construction begins to enlargen the Cathedral.

At the time that Saint Joseph Church became a Cathedral, it soon proved to be inadequate and plans were made to enlarge it. The present sanctuary was build, the sacristy area was added and the Chapel constructed. The original stained glass windows were removed and replaced with the present windows (two of the original windows remain in the Chapel). New altars and pews were added. The burial vault for Bishops of the Diocese was built under the high altar. The work cost $100,000.

The stained glass windows, all donated, were installed for the consecration in 1894. They were crafted in Innsbruck, Austria, by the firm of Tiroler Glazmalerei. The subjects for the windows and their placement were determined by Bishop Bradley.

The ceremony of consecration was performed by Bishop Bradley and assisted by several priests including Father George Guertin, later to be appointed third bishop of the diocese, who acted as chanter and cross bearer. Bishop Bradley’s aged mother attended the ceremony.

September 8, 1904 – John B. Delaney is consecrated as the second bishop of the Diocese of Manchester.

The monument honoring the bishops of the diocese which stands in the Cathedral Cemetery was erected by Bishop Delany. One of Bishop Bradley’s last requests was that his successor would erect this monument to remind the faithful that they should pray for their bishops.

1969 – The church is adapted to the many changes of the Liturgical Constitution of Vatican II. 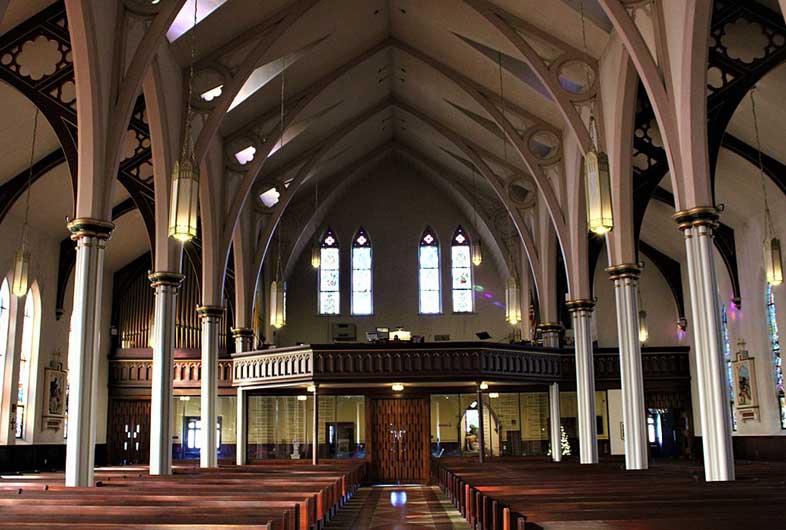 In January of 2020 we embarked on a few projects that were able to be accomplished with the support of many generous contributors and donors. We restored the façade of the choir loft to highlight the beautiful gothic details of this “choir loft rail,” we painted the columns and brought life to the capitols using colors from the windows, and we stretched our painters as we painted the side aisle trusses to highlight the strength and beauty of the gothic structure.

In addition to painting these structural components of the church we tackled the “green monster” and removed the carpeting. Then we installed our new steam boilers, “Fire” and “Brimstone”. Our most recently completed project was the restoration of the two painted murals to their original place in the arches that flank the main altar. Considering the age, size and limitations that we have to work with, we have slowly persevered in our restoration campaign. And there is more to do, so, in love, we hope, pray, and remain patient.

With these smaller restoration projects completed the largest and probably the most challenging one that awaits is the restoration of the nave ceiling and walls, the nave being the part of the church where the people sit. This past spring, with the support of Bishop Libasci, we have hired Swiatek Studios to assist us with evaluating the condition of the walls and ceiling, and to prepare a full colored rendering of the nave using historic photos from varying periods of the church’s history. Brett’s work has been completed and below you can see the architectural renderings.

In November 2021 taken before renderings are approved, scaffolding is set, plaster is repaired and painting is applied. Because of my love and our love for our church, I want to see this done as soon as tomorrow, but this is where I need hope, patience, prayer. As we look forward to these exciting next steps please keep the parish and this restoration project in your prayers, and pray that as we restore and beautify our church, that the restoration and beauty will lead us and others to conversion.  May our efforts all be directed to the glory of God and the sanctification of our parish. 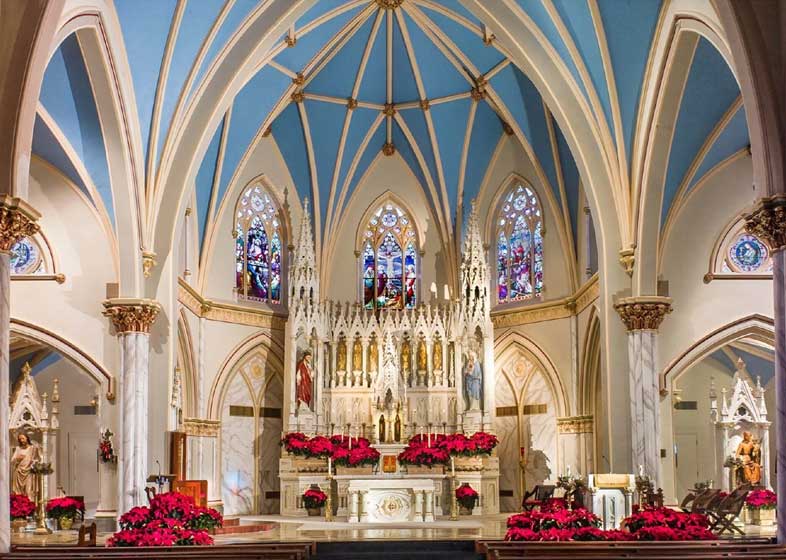 The gift of the Raredos began our efforts to restore the Cathedral to the grandeur foreseen by its architect Patrick Keely began. What made this gift so providential is that the same Architect, Patrick Keely, designed both St. Joseph Cathedral, and Holy Trinity Church in Boston, and as many who have watched the restoration have observed “it is a perfect fit.”

19 March was dedicated to Saint Joseph in several Western calendars by the 10th century, and this custom was established in Rome by 1479. 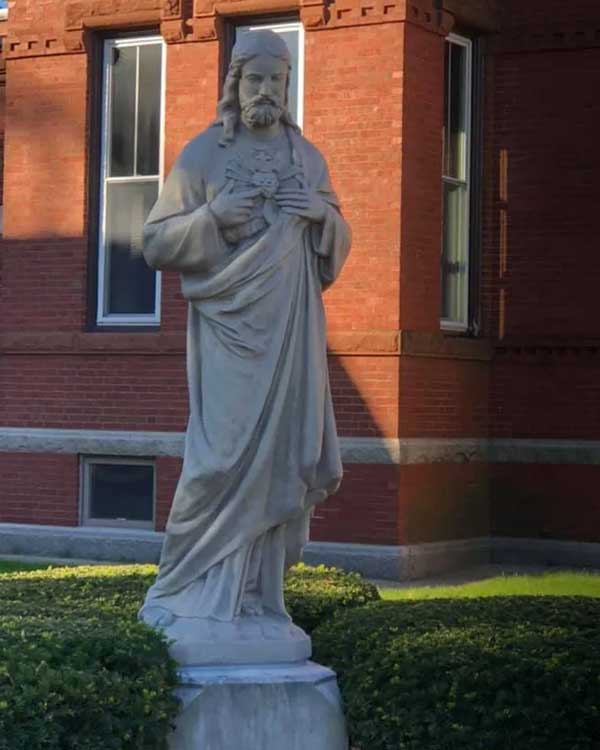 Manchester-Boston Regional Airport, commonly referred to as Manchester Airport which is 3 miles south of the central business district of Manchester, New Hampshire, United States is the nearby airport to the Cathedral.

Haverhill station, Bradford station, Exeter station are the nearby Train Stations to the Cathedral.