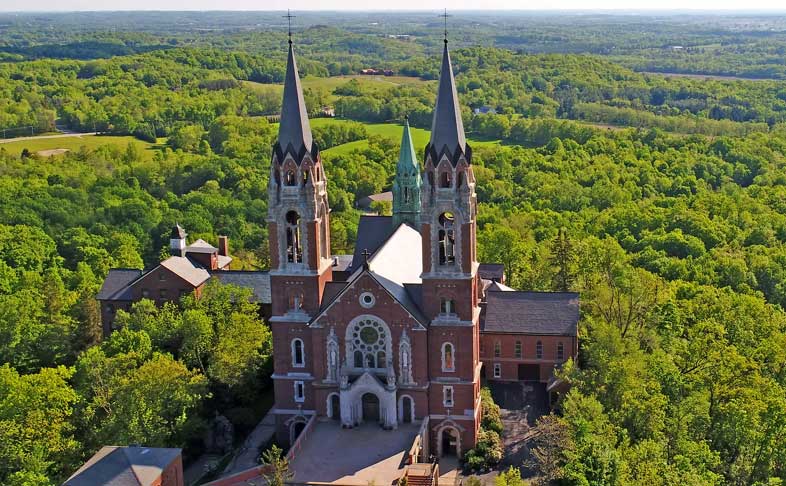 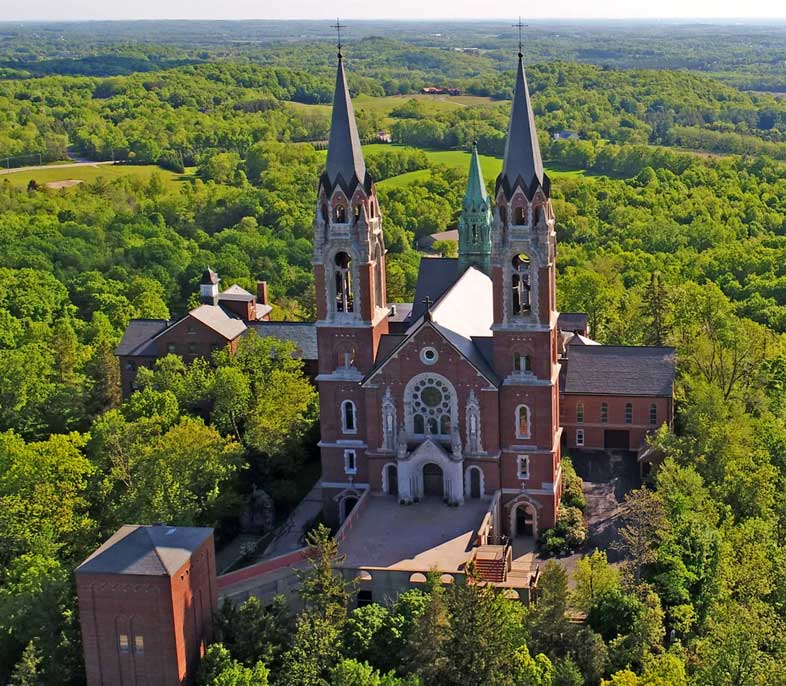 Holy Hill National Shrine of Mary, Wisconsin / Holy Hill Basilica and National Shrine of Mary, Help of Christians is a Roman Catholic shrine in the north central United States, dedicated to the Blessed Virgin Mary. The centerpiece of the shrine is a minor basilica. It is located in the town of Erin, near Hubertus, Wisconsin, in the Roman Catholic Archdiocese of Milwaukee. The shrine has approximately 300,000 visitors per year.

Holy Hill National Shrine of Mary, Wisconsin Situated atop eastern Wisconsin’s highest hill in Hubertus, Holy Hill, National Shrine of Mary, Help of Christians draws hundreds of thousands of pilgrims from all over the U.S. each year. Many stories of miraculous cures have been reported from Holy Hill, where a wall of abandoned crutches and wheelchairs stands as a testament. The hill has been considered holy ground since the first settlers arrived in the area and the first log chapel was dedicated.

One church followed another, and the third, most prominent of the Shrines was built in 1926. Holy Hill, whose caretakers are the Discalced Carmelites, has become an icon for the surrounding community. Conrad Schmitt Studios has been privileged to have a long relationship with Holy Hill. Many of the stained glass windows in the Shrine were designed and fabricated by Frank Larscheid, who was employed by Conrad Schmitt Studios in the 1920s and 1930s. He designed the altars and the carved pew ends as well.

Bernard O. Gruenke, Sr. led the 1950s decorative painting at Holy Hill. The design team for the reredos and mosaics included German professor Peter Recker, who was brought to the U.S. by Bernard O. Grue­nke and employed by CSS. The German artist previously had worked at the Vatican, restoring historic mosaics. Some decades later, Bernard O. Gruenke composed the proscenium arch’s angels and the Days of Creation designs.

More recently, Studio artists have painstakingly restored the Marian Shrine statue and, for the recent restoration and renovation, created a sample area of the proposed new decoration to assist in fundraising. The renewal of the classical Catholic worship space addressed every surface, with plaster restoration, a new decorative paint scheme, marble and mosaic cleaning, restoration of the terrazzo floor and refurbishing of the pendant fixtures.

The intent was to restore water-damaged areas and provide a renewed and inspiring decorative scheme without sacrificing the original, traditional elements. CSS provided a new palette and design artistry largely comprised of faux stone painting to enhance the Romanesque interior architecture. Holy Hill was declared a Shrine with “Portiuncula privilege” by Pope Leo XIII in 1903. And, as a result of the increasing number of pilgrims, the Discalced Carmelites of Bavaria were invited to staff the Shrine in 1906. On 19th November 2006, this Wisconsin Shrine was elevated to the status of Basilica.

In 2014, Conrad Schmitt Studios was part of a team that designed and fabricated a display case to house a special gift from His Eminence Timothy Cardinal Dolan to the Basilica of Holy Hill. Cardinal Dolan was the former Archbishop of Milwaukee and frequently returns to the area to celebrate the Eucharist and speak to the Catholic community. Last year, his Eminence presented the Basilica with the pallium that he received from St. Pop John Paul II upon his appointment as the archbishop of Milwaukee in 2003.

A pallium is an ecclesiastical vestment bestowed by the pope upon archbishops. This circular band of white wool is worn around the shoulders and features two pendants. The pendants are weighted with small pieces of lead covered in black silk. The pallium symbolizes the dual responsibilities entrusted to each metropolitan archbishop: Shepherding the flock and fostering communion with the Vicar of Christ. The pope is the only other member of the clergy to wear a version of the pallium. 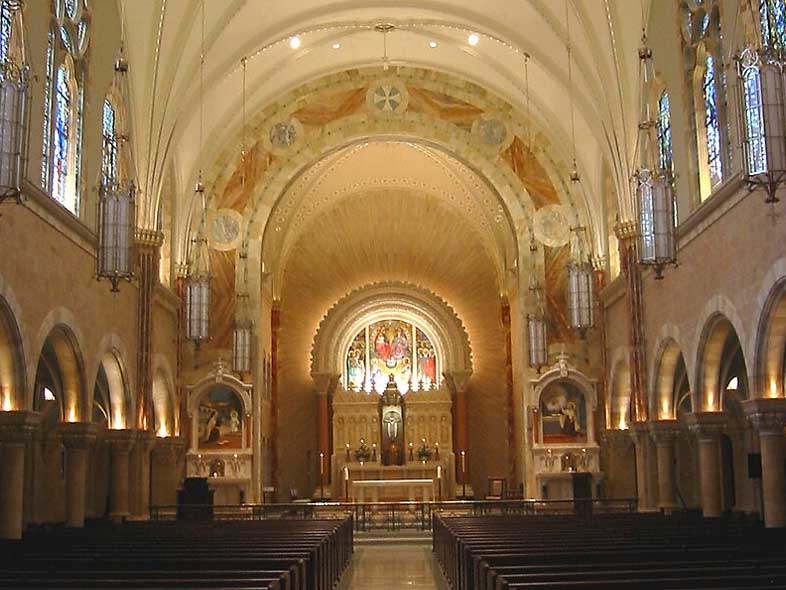 Holy Hill National Shrine of Mary, Wisconsin tradition says that the hill was first discovered 349 years ago in 1673 by Father Jacques Marquette with Louis Jolliet. However, modern historians view this tradition as untrue, though Jesuits were likely the first Catholic priests to discover the hill. The U.S. government owned the land until 1855, and the hill was known as “Government Hill” because surveying work was done there. Forty acres were purchased by Fr. Paulhuber of Salzburg, Austria.

The first resident on the hill was a hermit named François Soubrio. Around 1862, an area farmer found him living on the hill. Soubrio had heard about the hill when he was working as an assistant to a retired professor in Quebec, Canada. He had found an old French diary and map dated 1676 showing a cone-shaped mountain in Wisconsin. The diary described how the author placed a stone altar, raised a cross, and dedicated the hill to Jesus’s mother Mary. The diary account corresponds with Jesuit missionary work in the area between 1673 and 1679.

The name “Holy Hill” was first given to the place by Irish settlers in the area. Father George Strickner dedicated a log chapel as the first Shrine of Mary, Help of Christians on May 24, 1863. A set of wooden crosses were placed for the Stations of the Cross in 1875. In the winter of 1879, Fr. Raess sent a proposal to Archbishop John Henni to construct a new shrine to Mary. Construction began that spring. Pilgrims began flocking to the shrine, and it was decided that a religious order should administer the shrine.

A group of Discalced Carmelites came from Bavaria at the invitation of Archbishop Sebastian Messmer, and the Shrine of Mary was put under their care on June 26, 1906. The building now known as the Old Monastery Inn and Retreat Center was completed in 1920. The second shrine was removed in 1925 so that a third shrine could be built. The cornerstone of the third and present shrine was placed by Archbishop Messmer on August 22, 1926. The present church was completed and consecrated in 1931.

Another tradition describes a German priest who was recreant to his vows and came to America for penance. He found a reference to the hill in Marquette’s diary and decided to take a pilgrimage. He became ill in Chicago, and was paralyzed. He reportedly found the hill, crawled to the summit on his hands, and was cured of his paralysis. 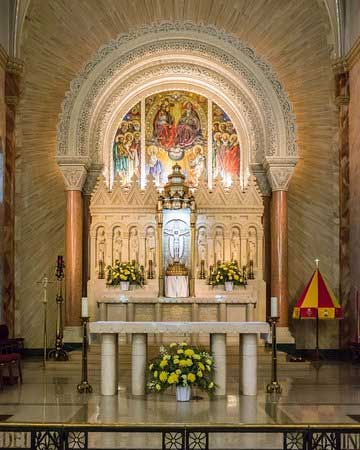 In 1861, while Fr. George Strickner was pastor of the Richfield parishes, the industrious German members of St. Augustine’s congregation, especially those living near Holy Hill, made plans to build a log chapel on top the hill. Work on the chapel began in the summer of 1862. The chapel was sixteen feet square and stood on a stone foundation facing west. A crucifix was mounted on the peak of the roof above the entrance. It had four windows, two facing north and two south. It stood about ten feet high from ground to eaves and eight feet from ceiling to floor.

The inside walls and ceiling were plastered and painted. The walls were adorned with pictures and charts of Christian religious history. There were a number of crutches and other tokens of illness cured through prayer placed in the southwest corner of the chapel. Benches sat along each wall and in front of the altar. A brass container for holy water and an offering box completed the chapel interior. The workers finished on Good Friday 1863.

At the dedication ceremony on May 24, 1863 Fr. George Strickner stood on the front step of this simple log chapel and preached the first sermon from the Shrine of Mary – Help of Christians to about 1,500 persons. In this sermon, Fr. Strickner used the name Holy Hill formally for the first time.

In winter of 1879, Fr. Raess summitted a proposal to Archbishop Henni for a new shrine at Holy Hill. He requested the service of H.C. Koch, a Milwaukee Architect. For $100, Mr. Koch provided plans, specifications and cost estimates for the second shrine. Work began in spring of 1879.

The main church was built in 1930. At its entrance, It has two eight-foot-tall statues which were placed there in 1958. The statue on the left depicts St. Mary, Help of Christians; and the one on the right depicts Saint Joseph, protector of the Carmelites. The inside of the church features mosaics of Discalced Carmelite founders St. Teresa of Jesus and St. John of the Cross. 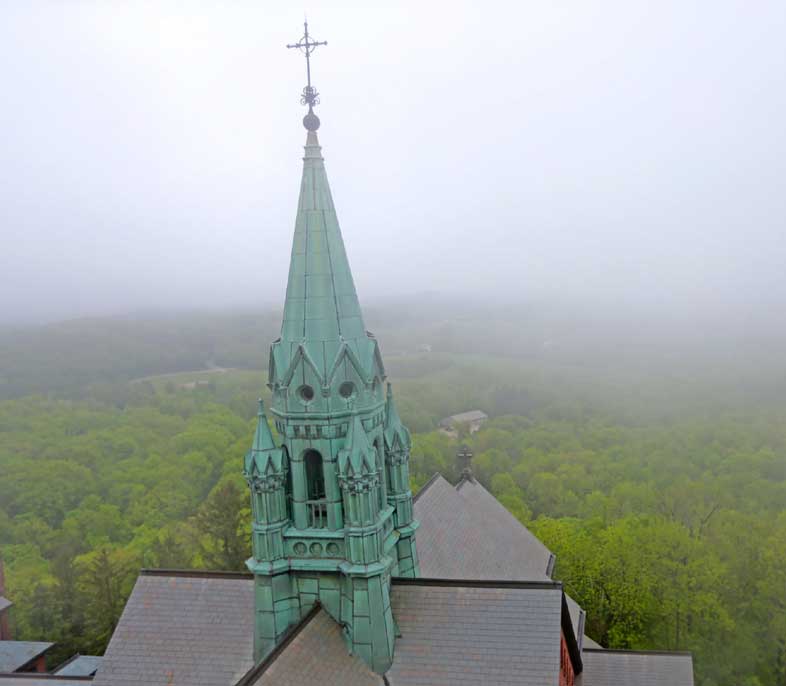 The view from the Holy Hill scenic observation tower. The tower rises 192 feet from its base to the tip of its spire, and is reachable by climbing 178 steps.

The shrine is located atop a high kame in 400 acres of woods. Visitors can climb a 178 steps observation tower to view the Milwaukee skyline, about thirty miles (50 km) southeast. At approximately 1,350 feet (410 m) above sea level, it is one of the highest points in south-eastern Wisconsin. Having worked with the Basilica many times throughout the years, the Carmelite Friars asked CSS to assist with the design of the special case.

The display also includes a description of the significance of the vestment, a photo of St. Pope John Paul II bestowing the pallium upon Cardinal Dolan and a timeline of the Cardinal’s life in the priesthood. The case is constructed of red rift oak and stained to match the existing wood in the Basilica. Similarly, the metal base of the stand replicates the detailed fleur-de-lis design of the cast iron communion rail. Together, these components help incorporate the display case into the architecture of the space and provide a worthy home for this precious gift. 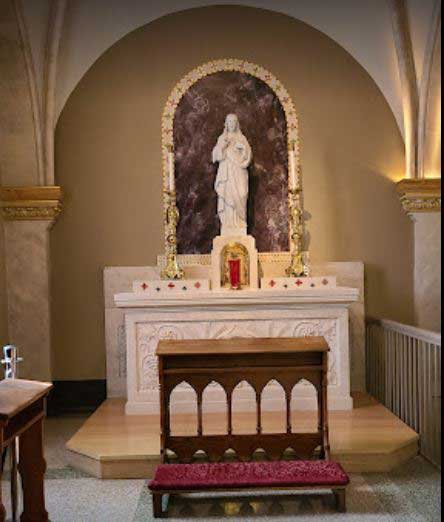 Holy Hill offers simple, overnight accommodations to anyone seeking an opportunity to encounter the Sacred in a place apart from the busy world. Our retreat facilities are housed in two buildings, the “New Guest House” and the “Old Monastery Inn.”

Holy Hill Guest House, as a centre for spiritual retreats, maintains a strict no drugs, no alcohol, no smoking policy. No alcohol should be brought into the retreat house. Please Note: the New Guest House and Old Monastery Inn overnight facilities are older, and not handicapped accessible. Access for anyone with a disability can be quite a challenge, as there is a full flight of stairs to the New Guest House rooms, and the four levels in the Old Monastery Inn are connected only by stairs. 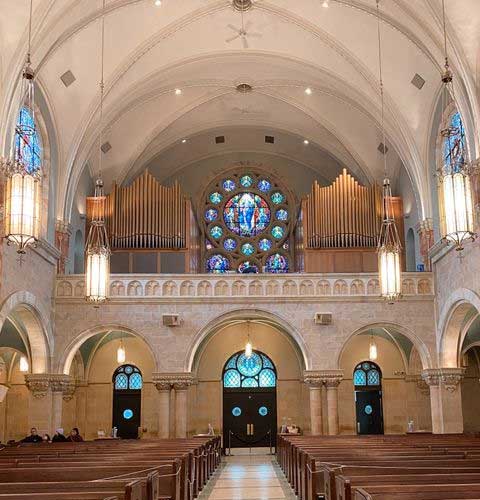 The church underwent a $6.1 Million renovation between 2002 and 2006. The renovations included extensive interior decorative painting, faux stone & mosaic by Conrad Schmitt Studios and exterior repairs, including a new slate roof for the monastery, main church and bell tower.

On June 6, 2006, vandals spray-painted the church and several shrines with expletives and references to Satan and the Number of the Beast. It was later discovered the vandals were two teenage boys. The cost of removing the graffiti was in excess of $33,000.

On May 26, 2013, four new cast-bronze entry doors were dedicated by His Excellency, Archbishop Jerome E. Listecki. The doors were designed by architect Duncan G. Stroik and contain scenes sculpted by artist Cody Swanson. The scenes depict Saint Theresa of Ávila, The Annunciation with Gabriel the Archangel and Our Lady, and Saint John of the Cross. 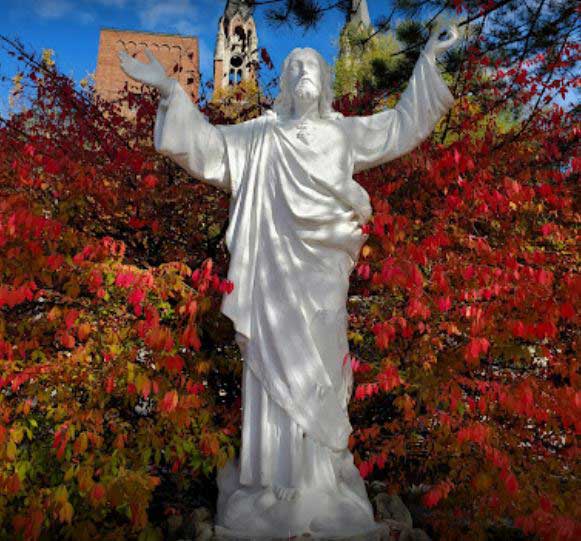 The shrine is listed on the National Register of Historic Places. On July 16, 2006, a Mass was held celebrating 100 years of Carmelite stewardship at the site. During that Mass it was announced that Pope Benedict XVI (the reigning pope at the time) had named Holy Hill a minor basilica. Holy Hill was dedicated as a minor basilica by Archbishop Timothy Dolan on November 19, 2006. There are about 85 minor basilicas in the United States.

New York Cardinal Timothy Dolan drew a large crowd of Catholics and well-wishers to Holy Hill on April 28, 2012, for a special Mass of Thanksgiving, some arriving as early as 4:30 a.m. to ensure a spot in the historic Basilica of the National Shrine of Mary Help of Christians. 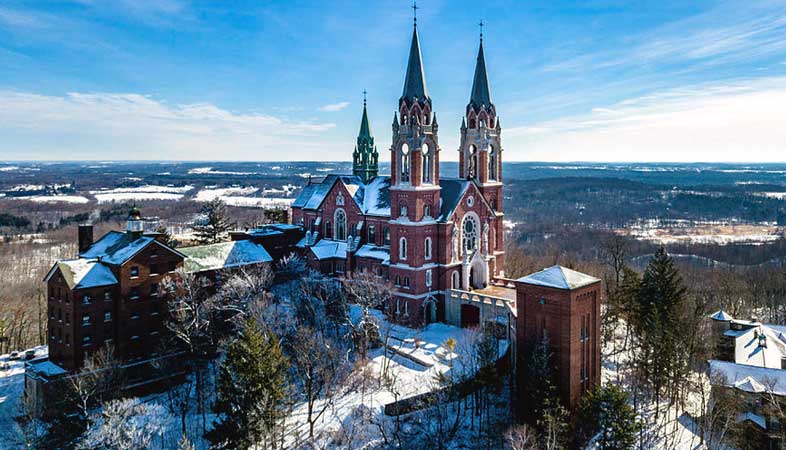 Annual Feast Day of the Blessed Virgin Mary is on 1st January.

Milwaukee Intermodal Station is the main intercity bus and train station in Milwaukee, Wisconsin which is nearby to the basilica.