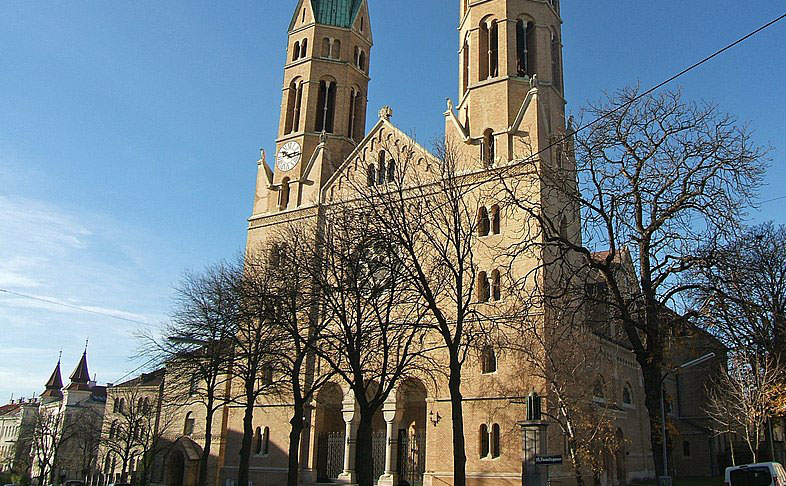 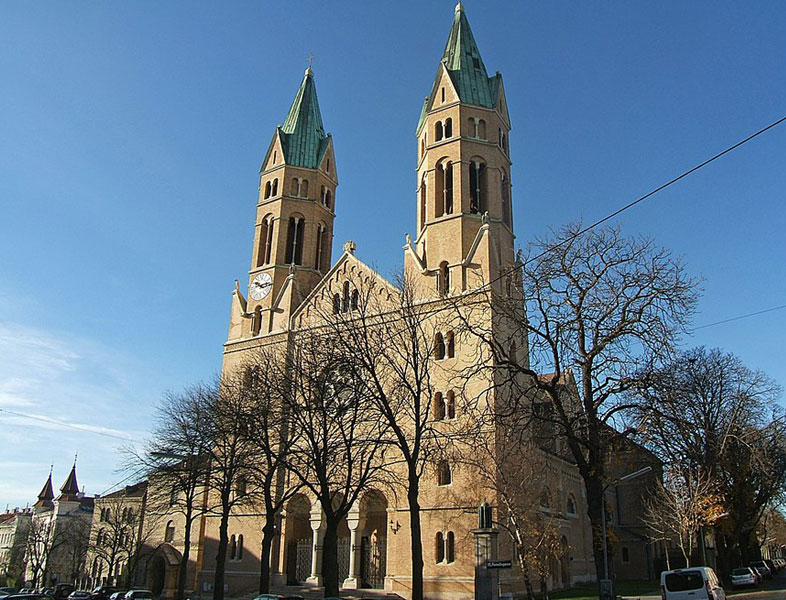 The first monastery belonging to the Discalced Carmelites was founded in Austria on 4 February 1622 in Leopoldstadt. This was made possible by Ferdinand II and his wife Eleonora, but after Joseph II dissolved the Carmelite convent, along with many other monasteries, the order was only able to maintain a single parish. Later, this parish also passed to the lay clergy. The monastery building was later torn down, but the former monastery church is still used as a parish church.

It was not until the end of the 19th century that the order found a new home in Döbling. The Karmelitenkloster Döbling was built in the Silbergasse in Unterdöbling between 1898 and 1901. It was financed from the state religion fund.

The first ever abbey dedicated to Discalced Carmelites was established in the year 1622. Dobling Carmelite Nunnery was built for the Teresian Carmelites, an offshoot of the Discalced Carmelites, that sprung out of the efforts of Saints John of the Cross and Teresa of Ávila. The priory is found adjacent to a Roman Catholic house of worship and occupies a prominent spot in the city’s 19th district. Built to the designs of Richard Jordan, the monastery building was completed in the year 1898. The church on-site is a magnificent structure with arresting Art Deco and Art Nouveau interiors. 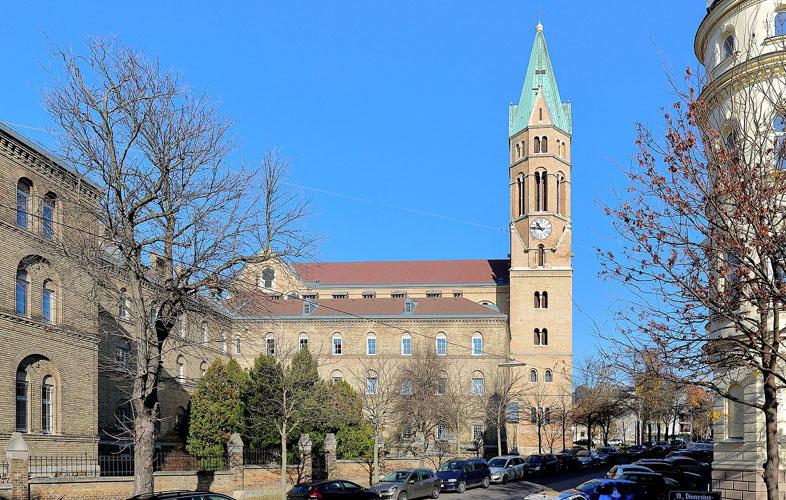 Döbling Carmelite Monastery, Vienna – Work began on the monastery and church, which had been designed by architect Richard Jordan, in 1898. The church was built with a nave with four sets of pillars and a double tower facade. The nave is 40 metres long and 20 metres wide. Jordan made particular use of forms found in Romanesque architecture in his construction. The interior of the church is particularly impressive because of the use of Art Nouveau and Art Deco.

In addition to a main altar, six secondary altars and a chapel, the church boasts a pulpit in carrara marble made by Ludwig Schadler and decorated with the four original Doctors of the Church – Saint Ambrose, Saint Augustine, Saint Jerome, and Pope Gregory I, although the figure of Pope Gregory resembles Pope Leo XIII, during whose papacy the church was erected.

Our Lady of the Bowed Head 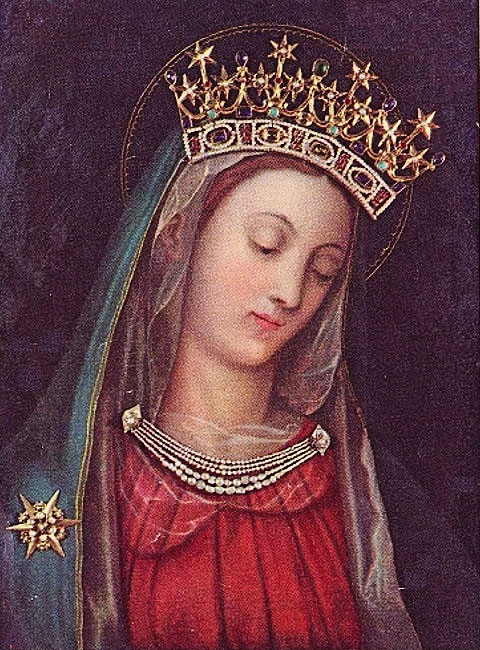 The story of Our Lady of the Bowed Head begins in Sicily in 1610. A Carmelite monk, by the name of Dominic of Jesus and Mary, was charged with inspecting an old, broken down house to see if it might be suitable to convert into a monastery. As he walked around the grounds, he passed a pile of trash. Giving the debris a cursory look, Friar Dominic kept on walking. Suddenly he stopped. Something or someone was telling him to go back and look closer at the trash.

He heeded the prompt and returned to the garbage pile. He grabbed a broken stick and began separating the mounds of junk. When he saw the edge of a picture frame, he paused. He carefully pushed away the debris that surrounded what he now realized was a painting. Rescuing the artwork from its impending fate, he pulled it out and discovered it was an old oil painting of the Blessed Virgin Mary.

He could not believe someone had thrown such a beautiful picture of the Blessed Mother in the garbage. Friar Dominic wrote that the first thing he did was to apologize to Mary. He said, “I am sorry, dear Mother, that someone has treated thy image in such a terrible manner. I will take it back to the monastery with me and fix it up, and I will give thee the homage which thou so rightly deserve.”

Dominic did indeed, take it back to the monastery, and restore it as best he could. He hung the picture in his cell and every day gave Mary the attention, reverence, and devotion that was due her. He prayed to Our Lady with an increased exuberance asking her for the grace to please Jesus in all things.

One day when Dominic was cleaning his cell, the sunlight happened to land on the picture. Dominic thought there was dust on the painting and went over to clean it. The humble friar felt that he had been remiss in his duties and, raising his eyes to heaven,  apologized to Our Lady for having neglected her painting. He even apologized for using the old rag he had.

As he proceeded to dust the picture, Our Lady’s face began to move, and she smiled at the priest. Dominic was not sure what was happening and then Our Lady spoke to him, saying, “Fear not, my son, for your request is granted! Your prayer will be answered and will be part of the reward, which you will receive for the love that you have for my Son Jesus and myself.”

She proceeded to tell him that she would grant him any favor he wanted. He asked for Her to help his friend be released from Purgatory. She told him, “Dominic, my son,I will deliver this soul from Purgatory if you will make many sacrifices and will have many Masses offered for this soul.” Then the apparition of Mary faded away.

The apparition of Our Lady vanished and Friar Dominic knew he had to share the painting with everyone. It was placed in the Oratory of St. Charles located next to the Church of Santa Maria de la Scale.

Today it is in the monastery Church of Vienna Dobling. On September 27, 1931, it was solemnly crowned by Pope Pius XI – the 300th anniversary of its arrival in Vienna.

Fr. Dominic was declared Venerable by St. Pius X in 1907.

The Chapel of Saint Teresa 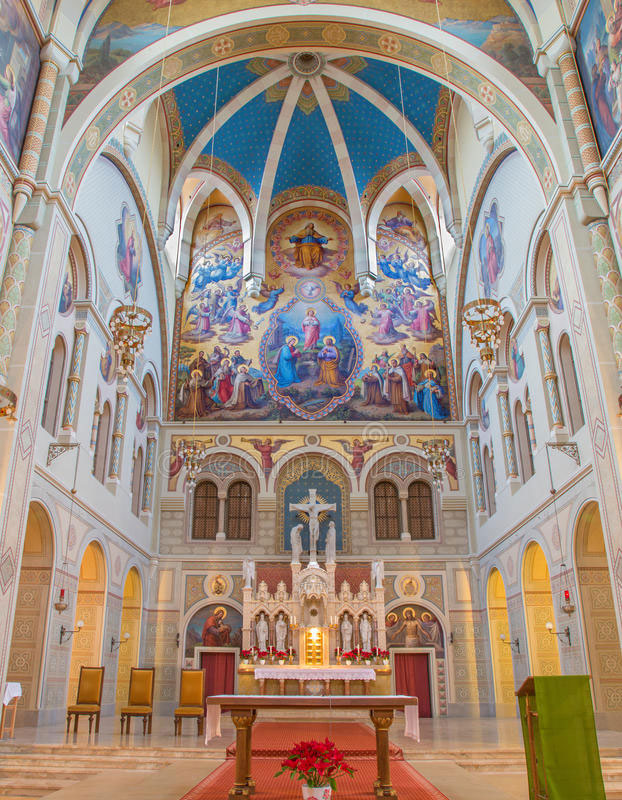 The chapel of Saint Teresa houses the grave of the Spanish Carmelite priest Dominicus a Jesu Maria, who participated in the foundation of the monastery in Leopoldstadt in 1632. He was also responsible for bringing the depiction of Mary featured on the altar of mercy to Vienna. In 1903, Dominicus’ remains were brought from Leopoldstadt to Döbling. Behind his grave stands a white marble altar with a figure of Thérèse of Lisieux, a Carmelite nun who was canonised in 1925.

The Carmelite crypt, which is accessible from the chapel, was used between 1917 and 1932 to house coffins, including that of Charles X of France, brought to Vienna on Empress Zita’s orders from the Kostanjevica Monastery in Gorizia which the Empress feared would be damaged in the course of World War I.

Döbling Carmelite Monastery, Vienna – A large mural depicting angels, saints and the Holy Family decorates the wall above the main altar. It is the work of Josef Kastner, who also decorated the nave with scenes from the life of the Holy Family.

The altar is the work of Ludwig Schadler and also depicts the four Doctors of the Eastern Church (John Chrysostom, Basil the Great, Gregory of Nazianzus, and Athanasius of Alexandria) in the foreground and Jesus on the cross, flanked by his mother Mary and John the Apostle in the background. 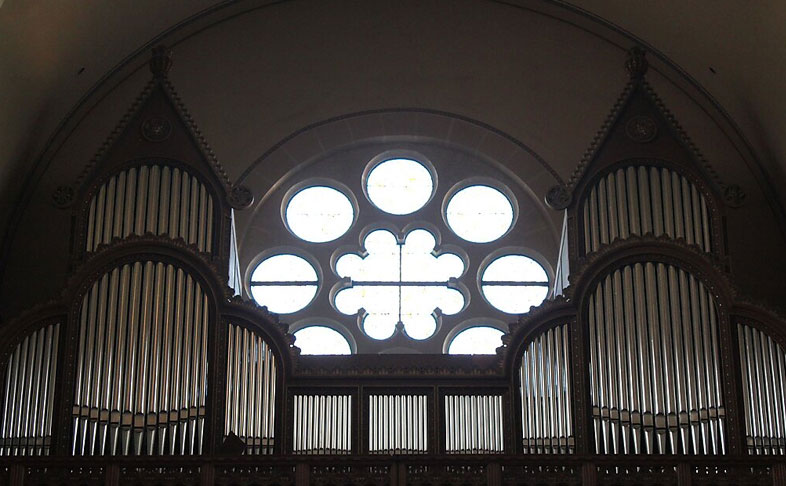 The church has six side altars, which are described here in clockwise order from the front left-hand corner of the church.

The Altar Of Mercy

The most important side altar is called the altar of mercy, Mary with bowed head. The altar was made in 1904 by the Marmorindustrie Kiefer AG company from Oberalm using Untersberg marble in accordance with a design by Richard Jordan. The depiction of Mary is to be found on a niche altar reminiscent of Romanesque designs. It is flanked by two angels shown in relief and bears the inscription Ave Maria, gratia plena. The history of the depiction itself is explained on an arch over the altar.

The depiction of Mary is an oil painting 45 x 60 cm in size. It is the work of an unknown master of the Italian school of the 15th or 16th century. It shows Mary with her head slightly bowed. A crown was added in 1931. According to legend, the depiction was found by Pater Dominicus covered in dust in an old building near the first Carmelite monastery in the Roman neighborhood of Trastevere.

It was restored and made its way to the court in Munich, before being moved to Vienna. It was revered by female Carmelites belonging to the Ordo Carmelitarum, and Ferdinand II is supposed to have prayed before it during the Battle of White Mountain in 1620. Ferdinand II later ascribed the Catholic army’s victory to Mary’s help.

During World War I, the picture was carried in great processions through the streets of Vienna to St. Stephen’s Cathedral, where thousands prayed before it for peace. Even Franz Joseph I believed Mary’s help could be achieved via this picture and had it brought to Schönbrunn Palace so that he too could pray for peace before it. 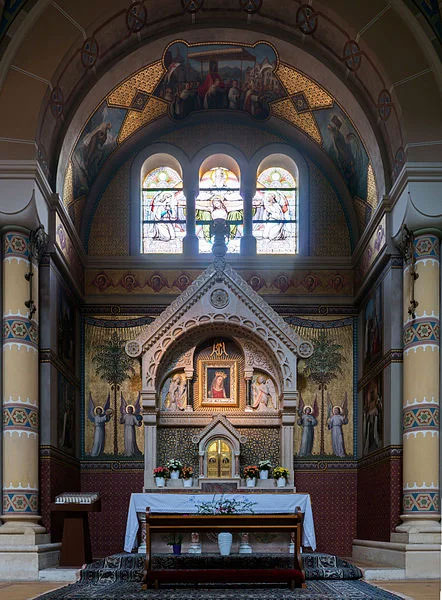 The Altar of the Child Jesus

Opposite the altar of mercy is the altar of the child Jesus. It too was made using Untersberg marble in 1904. Above the altar, there is a copy of a wooden figure of the child Jesus from the 18th century which the Carmelites had brought from their hermitage in Mannersdorf. For its part, the original figure was based on the famous Jesulein (the little Jesus) wax figure in Prague.

The Altar of Christ the King

The altar of Christ the King stands to the right of the altar of the child Jesus. It was made in 1922 by the architect of the church, Richard Jordan, from maiolica and marble in art deco style. The altar’s design demonstrates the dramatic change in style that had taken place in the space of 20 years.

The Altar of Saint Teresa

To the right of the altar of Christ the King is the altar of Saint Teresa. It was donated by the family of Unterdöbling industrialist Johann Zacherl and shows the Transfiguration of Christ on Mount Tabor. The altar was made by the same artists who participated in the construction of the altar to Saint John.

The Altar of Saint John

The Altar of Saint Joseph 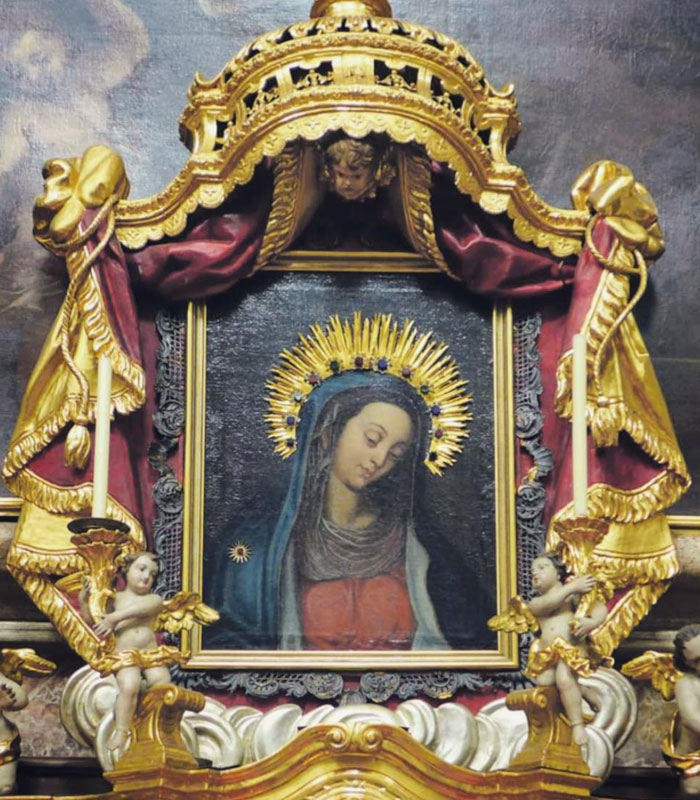 The miraculous image of Our Lady with the Bowed Head in the Carmelite church in Linz, Austria.

The Annual Feast of Our Lady of the Bowed Head is held on 7th February.

Vienna International Airport at Vienna, the capital of Austria, located in Schwechat, 18 km southeast of central Vienna and 57 kilometres west of Bratislava is the nearby airport to Döbling Carmelite Monastery.

Stephansplatz Subway Station is the nearby Train Station to Döbling Carmelite Monastery.