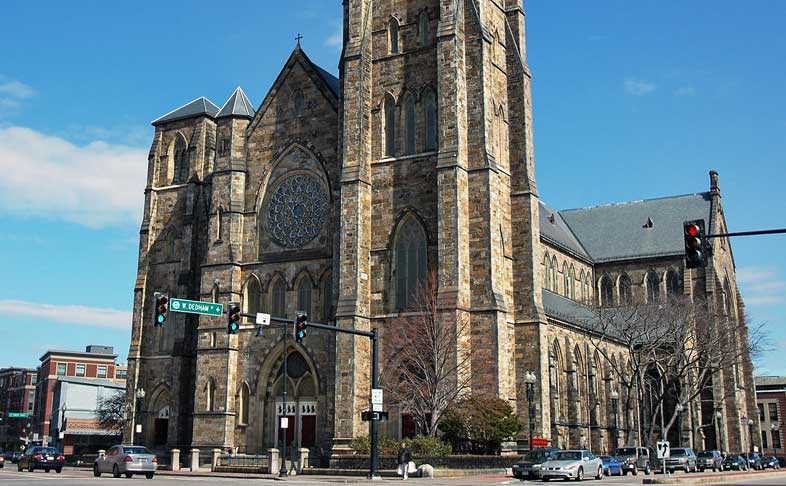 Cathedral of the Holy Cross, Boston 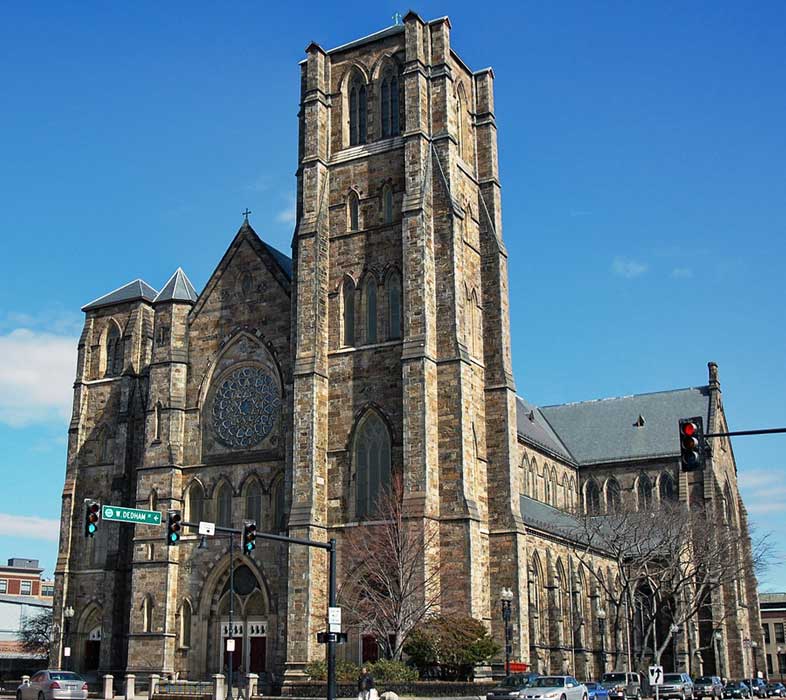 The Cathedral of the Holy Cross, the mother church of the Metropolitan See of Boston and the seat of His Eminence, Seán Patrick Cardinal O’Malley, the Archbishop of Boston. Located in the South End neighborhood of the City of Boston, the Cathedral serves a vibrant, diverse community worshiping English, Spanish, German, Ge’ez and Tridentine forms of the Catholic Tradition.

Designed by the nineteenth century Irish-American ecclesiastical architect Patrick Keely, the Cathedral of the Holy Cross measures 364 feet in length, 90 feet in width and 120 feet in height. In 1860, Bishop John Fitzpatrick began work on a new Cathedral realizing that the Catholic population outgrew its first cathedral on Franklin Street. After the American Civil War stalled the project, the then diocese of Boston finally broke ground on 29 April 1866. Archbishop John J. Williams, the first archbishop of Boston, presided at the rite of dedication on the Solemnity of the Immaculate Conception of Mary, the Mother of God, 8 December 1875.

As the largest Church in New England, the Cathedral seats nearly 2,000 people. Its Gothic Revival style incorporates local Roxbury puddingstone and gray limestone. The Cathedral houses the largest, and arguably finest, organ built by the world-renowned Hook and Hastings Company in 1875.

While this site offers a taste our faith community, we invite you to come worship, serve and minister with us, discover and engage our living history on Washington Street.

When construction was finished, the cathedral rivaled both Old South Church and Trinity Church in grandeur. The cathedral is located in the city’s South End neighborhood, at 1400 Washington St. Although the South End was initially developed for Boston’s emerging Anglo-Saxon Protestant middle class, the neighborhood transitioned to new immigrants, especially Irish, as middle class owners moved to the new Back Bay neighborhood.

The cathedral functions both as a cathedral and as a parish. The Cathedral Parish consists of large English- and Spanish-speaking congregations, drawn largely from the local area, and also includes three Archdiocese-wide congregations: the Ge’ez Rite practiced by Ethiopian, Eritrean, and Egyptian Catholics; the German Apostolate; and the Tridentine Mass Catholic community. The first of these congregations moved to the cathedral from the nearby Holy Trinity Catholic Church in 1994, the other two in 2008.

History of Cathedral of the Holy Cross, Boston 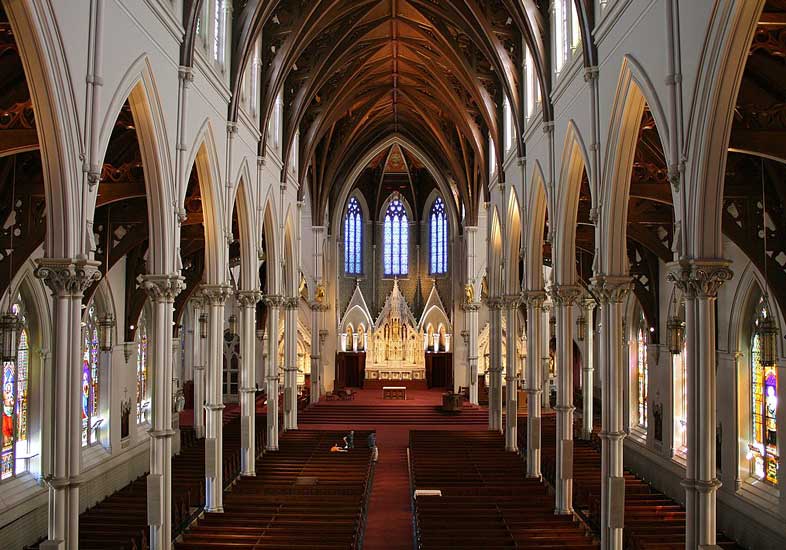 For more than 142 years, the Cathedral of the Holy Cross in Boston’s South End has stood grandly and served its parishioners. Now, after decades of graceful aging, the building is undergoing a crucial renovation. As a part of the project, Longleaf Lumber was able to salvage thousands of feet of gorgeous heart pine flooring.

When Boston’s Catholic population exploded in the mid-1800s, the sole Catholic church on Franklin Street was overwhelmed. To accommodate the newly-arrived churchgoers, architect Patrick C. Keely was commissioned to draw up plans for a new cathedral. Born in Ireland, Keely emigrated to the United States in 1842, beginning his career as a carpenter in Brooklyn, New York. Over the course of his career, Keely designed 16 cathedrals and close to 600 other churches.

Although Keely’s first site visit at Washington Street in Boston was in 1861, the United States Civil War put a temporary halt on construction plans, and ground wasn’t broken until 1866. Nine years later, in 1875, the cathedral was dedicated.

Cathedral of the Holy Cross in BostonDesigned in the Gothic Revival style, the Cathedral was made primarily from Roxbury Conglomerate (informally known as Roxbury puddingstone), the official rock of Massachusetts and bedrock stone underneath twelve Boston-area cities. The cathedral was trimmed with Quincy granite and sandstone. Keely also designed the altar and the case for the Hook & Hastings organ, which – at the time – was the largest of its kind in the United States.

Today, the Cathedral of the Holy Cross is the mother church for the Roman Catholic Archdiocese of Boston and is the largest Roman Catholic church in New England. The building is 364 feet long by 170 feet wide at the transepts (90 feet at the nave and aisles), by 120 feet high to the ridgepole.

In additional to being an important location for religious services, it is also home to a children’s camp, meeting space for Alcoholics Anonymous, an emergency shelter, a food panty, an immunization center, and other social services. Historic events that took place at the cathedral include a Requiem for John F. Kennedy in 1964, a prayer service by Pope John Paul II in 1979, and an interfaith prayer vigil for Boston Marathon bombing victims, with a eulogy delivered by President Barack Obama in 2013. 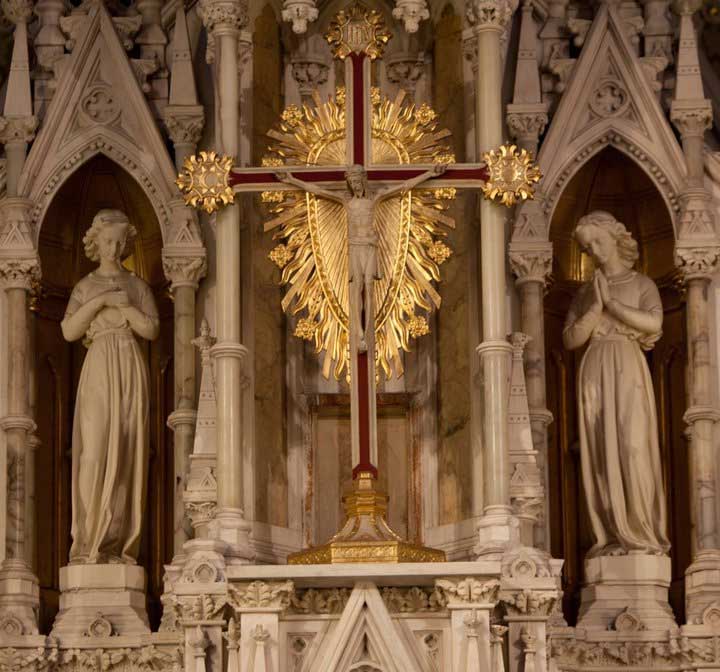 Cathedral of the Holy Cross in Boston by Jim Hood Due to its age and deterioration of some materials, the cathedral is now being renovated. Suffolk Construction is handling the $25 million reconstruction, and has committed to doing so without profit. The extensive improvements to the cathedral include a new floor and altar as well as new sprinkler, lighting, and sound systems. The leaking roof and water-damaged walls will be repaired, and air conditioning installed. Pews for over 2,000 people have been removed and will be refinished and reinstalled. Beams are to be varnished, columns painted, and the extensive collection of stained glass illuminated.

Longleaf Lumber became a part of the renovation process when the existing flooring was scheduled to be removed. After assessing the floors in place, it was determined that careful and skilled dismantling of the existing floor structure would allow the antique boards to be saved. As the flooring was removed from beneath the pews, we discovered a striking wear pattern of both bright and dark patches.

By the end of this process, we had been able to salvage 8,000 square feet of exceptional quality Heart Pine flooring that is entirely free of knots and in widths from 4″ to 5-1/2″. The flooring is 1-1/8″ thick (which is thicker than traditional residential flooring) and, because most of the existing tongue-and-groove profiles are still useable, could be reinstalled ‘as-is’ to great visual effect.

The floorboards could also, however, be re-milled to 3/4″ thickness with a new tongue and groove, milling away the current top wear layer for a fresh, consistent surface. In either case, a beautiful floor with a very special history is now available. We look forward to seeing where this flooring finds its next home.

The cathedral was named after the relic of holy cross that is owned by the church. This relic, supposedly a small fragment of the cross from Jesus’ crucifixion was on display in the cathedral until 2010 when it was stolen from the church by a janitor. The relic was eventually returned to the cathedral, and since its theft the relic has only been on display during special dates throughout the liturgical year.

In 2018, the first major renovation of the cathedral began. During the process, approximately 8,000 square feet of reclaimed wood was salvaged from the building. The $26 million renovation was completed on Palm Sunday 2019. 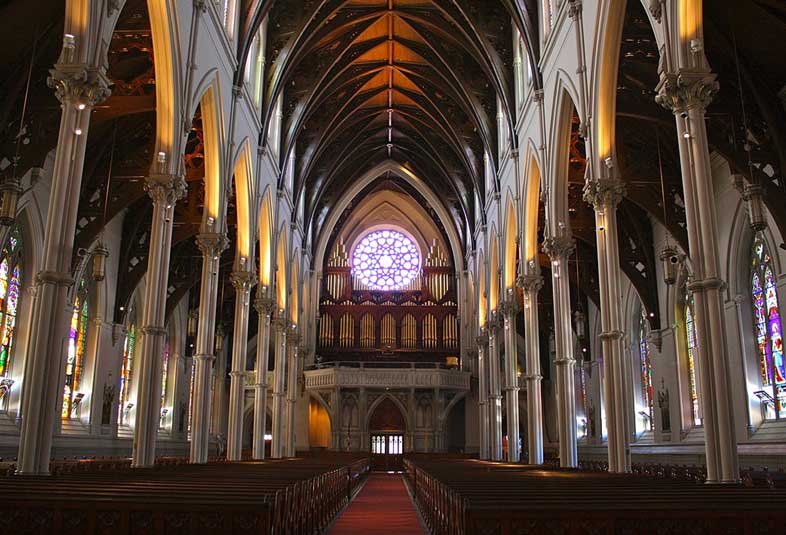 The cathedral was designed by Patrick Keely, a noted ecclesiastical architect, in the Gothic Revival style. Construction commenced in 1867 and was completed in 1875. With local anti-Catholic sentiments a recent memory, the Gothic Revival edifice was intentionally massive, a statement that the Catholics of Boston were here to stay. Bricks from the 1834 riots in Charlestown, in which an Ursuline convent was burned down, were used in the arch over the front door.

Built of Roxbury puddingstone with gray limestone trim, it reaches a height of 120 feet. Until the erection of the new Cathedral of St. Joseph (Hartford, Connecticut) in 1957, Holy Cross was the largest cathedral in New England. The building, measuring 364 ft (111 m) in length and 90 ft (27 m) at the transepts, can accommodate about 2,000 worshippers in the main level. There is also an oratory for smaller services in the lower level. A planned western spire was never completed. Supervision of the construction fell largely to Keely and his assistant John A. Dempwolf.

The cathedral retains its E. and G.G. Hook and Hastings pipe organ, opus 801, which was installed in 1875. The organ console was replaced in 1929 with a used theatre organ console when the instrument was updated. In 2003, the Andover Organ Company created and installed its opus R-394, a replica of the original three-manual console, and updated wiring and made other needed repairs. 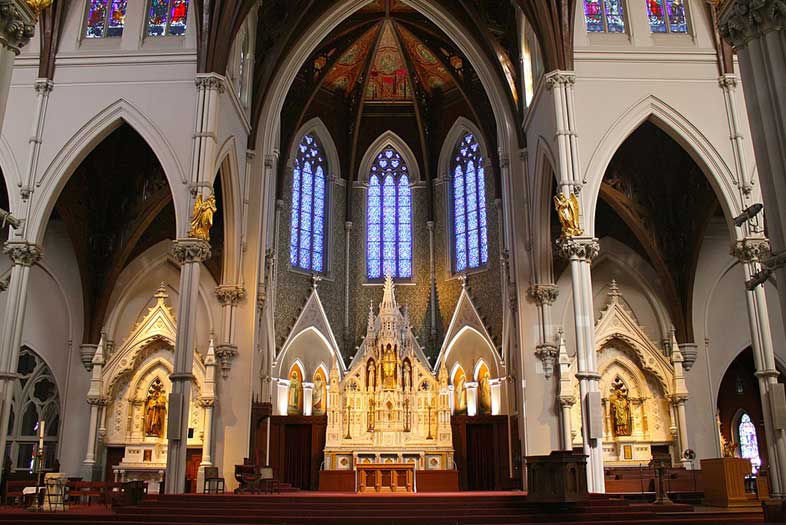 A Cathedral Rich In History

The Cathedral of the Holy Cross personifies the story of our past while broadening its pastoral outreach in the larger community. This iconic treasure inspires people to grow in faith, welcomes those most in need and preserves some of the most important moments in our collective history.

Responding to the need for a larger Cathedral 150 years ago, the renowned church architect Patrick Keely designed this Gothic revival structure incorporating massive stained glass windows from Germany, puddingstone from local Roxbury quarries, the hand-carved high altar and the largest organ in North America at that time. Together, they created a spectacular “Mother Church” for the Archdiocese.

Although used weekly by thousands, the Upper Church has received little refurbishment in its 150 years. We are seeking the needed philanthropic funds to fully restore the interior. This project remains a pivotal cornerstone of Inspiring Hope: Our Cardinal’s Campaign for the Future of Our Catholic Faith. 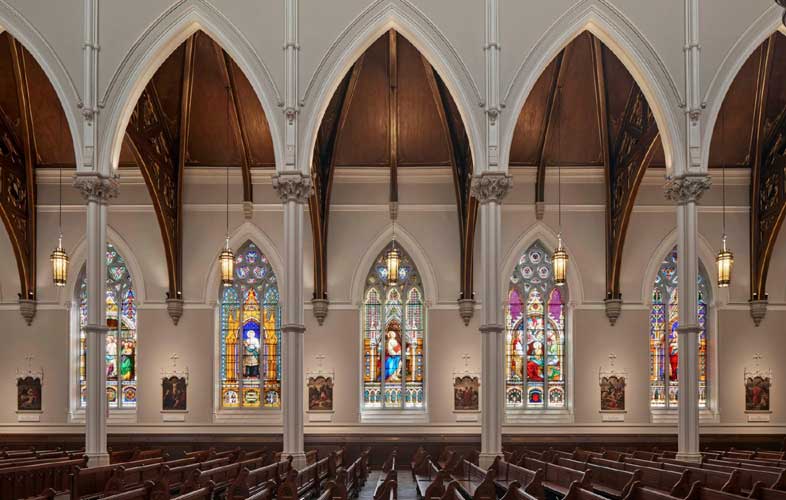 Today, the Cathedral of the Holy Cross stands as a living expression of God’s love through its active parish community. With its capacity of 2,000, the Cathedral provides an important gathering place for Catholics living across the 144 communities of the Archdiocese.

In addition to its significance as a place of worship, its facilities deliver critical social services. The parish serves a growing population in the South End with tremendous diversity and many young families. It provides spiritual care for Cathedral High School (CHS), a Catholic middle and high school serving 360 students who come from low income backgrounds. The CHS community celebrates Mass, receives religious education and uses space for programs including its peer ministry program.

As a social justice centre, the Cathedral provides: 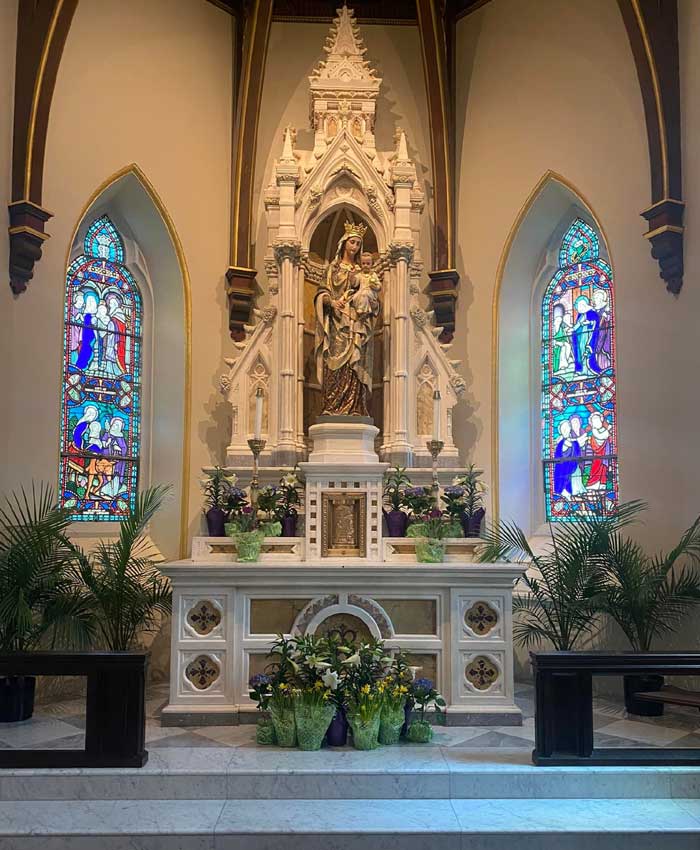 A Cathedral For All

As the seat of the Cardinal Archbishop, the Cathedral welcomes visitors, pilgrims and community leaders. Throughout the year, Cardinal Seán invites groups to fill the Cathedral and celebrate their faith, including the Blue Mass for first responders, Haitian Independence Day and Walking with Mary, a multicultural Marian procession. The Cardinal also ordains deacons, priests and bishops to serve the people of God in every corner of the Archdiocese.

In 2015, Pope Francis invited the Universal Church to celebrate an Extraordinary Jubilee of Mercy. During the Year of Mercy, the Cathedral welcomed more than 10,000 pilgrims who passed through its Holy Doors.

The Cathedral of the Holy Cross is the largest church of any faith in New England and an important spiritual home. The renovation will restore this awe-inspiring edifice with respect for the integrity of the Church’s artistic masterpieces. At the request of Cardinal Seán, John Fish, the Chairman and CEO of Suffolk, will lead the renovation along with David Manfredi, CEO and Founding Principal of Elkus Manfredi Architects. The work will include:

Stained glass windows cleaned and illuminated from within at night.

The sanctuary platform lowered. The ceiling and walls repaired and painted using original colors and designs. A new baptismal font relocated to the front of the Saint Joseph Shrine. New altar and ambo installed along with handicap accessibility.

The Blessed Mother statue and side altar cleaned and restored. Central air conditioning installed. The choir area and vestibule painted. 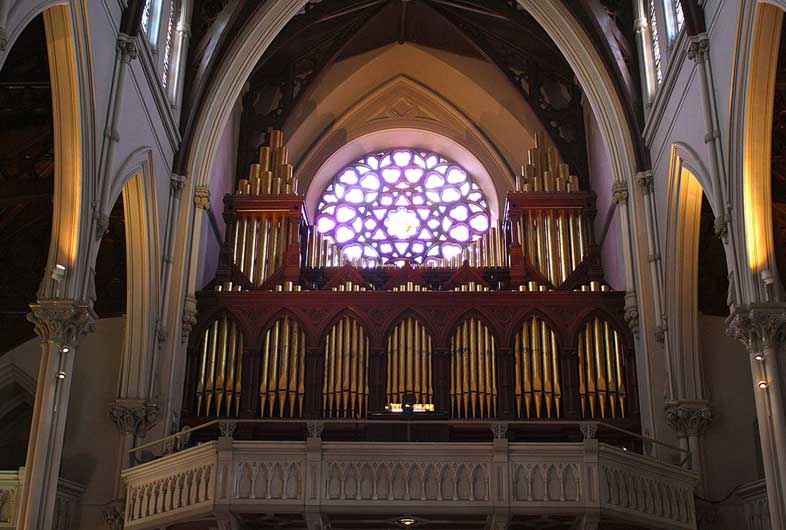 September 14th is the solemnity of the Exaltation of the Holy Cross which is the titular feast of the Cathedral. As permitted for a titular feast of a parish we celebrate it on the nearest Sunday.

Prudential Light Rail Station in Boston, Massachusetts is the nearby train station to the cathedral.