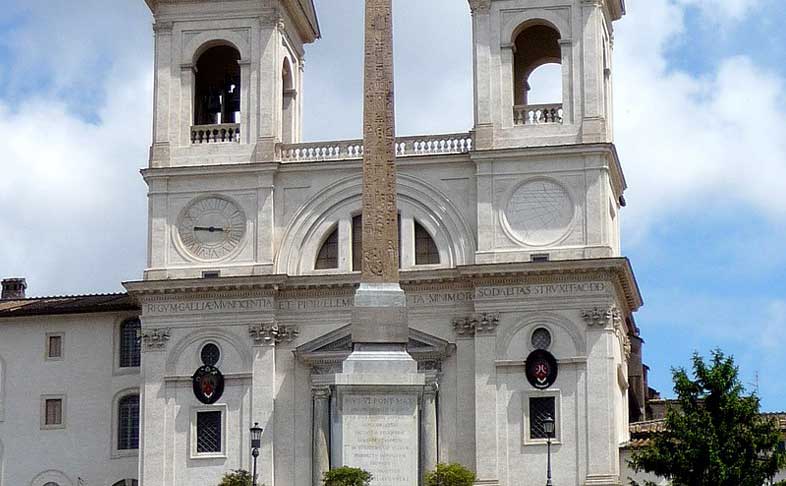 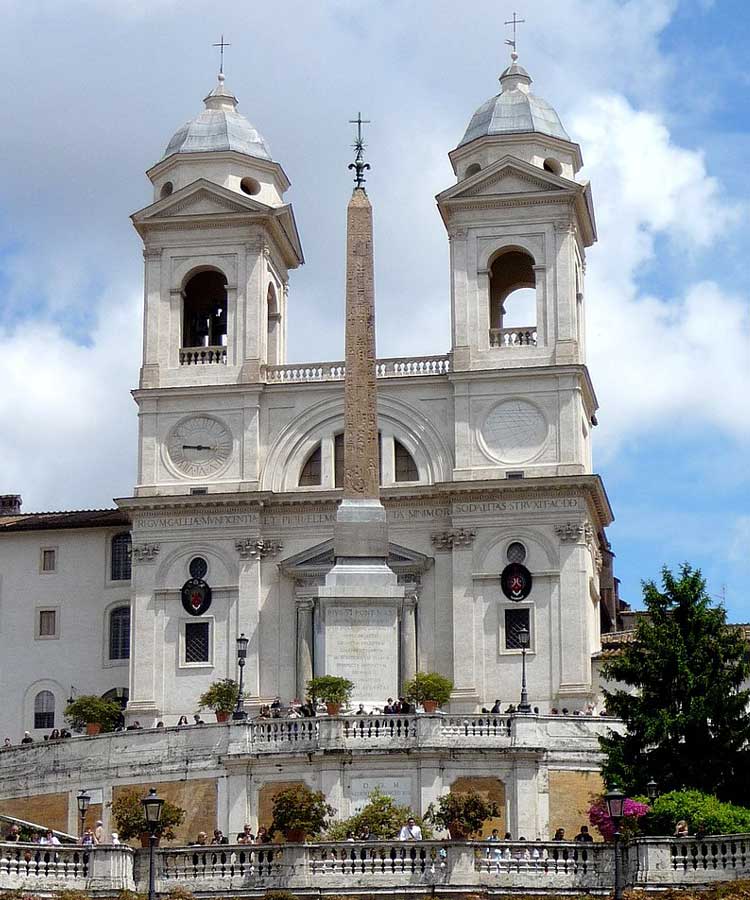 The church of the Santissima Trinità dei Monti, often called merely the Trinità dei Monti, is a Roman Catholic late Renaissance titular church in Rome, central Italy. It is best known for its position above the Spanish Steps which lead down to the famous Piazza di Spagna. The church and its surrounding area (including the Villa Medici) are a French State property.

Santissima Trinità dei Monti is a 16th century convent and titular church at Piazza Trinità dei Monti 3 in the rione Campo Marzio. Please don’t ring the doorbell of the convent without an appointment, unless you wish to venerate the Mater Admirabilis.

One of Rome’s highest churches is perched above the Spanish Steps and is, perhaps ironically, a French church. At the summit of the now-famous staircase that was actually financed by French authorities, it bears the name “Spanish Steps” because of the embassy of that country that occupied the lower area and gave the piazza its name. The name is officially Santissima Trinita di Monte Pincio (most holy trinity of Mt. Pincio, referring to the hill on which it sits.) There was once a vineyard here that had been donated to an order of friars from French King Charles VIII. The adjoining convent remains.

History of Sanctuary of Montevergine 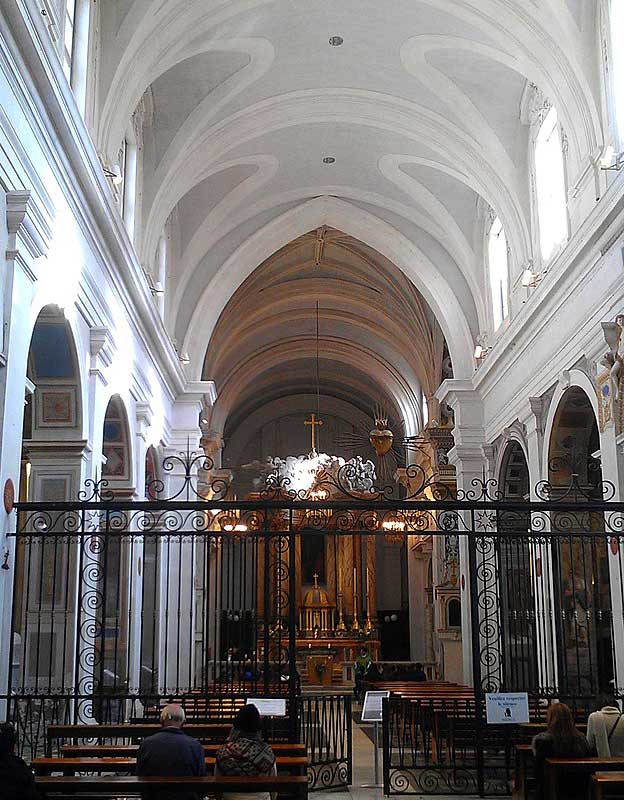 In 1494, Saint Francis of Paola, a hermit from Calabria, bought a vineyard from the papal scholar and former patriarch of Aquileia, Ermolao Barbaro, and then obtained the authorization from Pope Alexander VI to establish a monastery for the Minimite Friars. In 1502, Louis XII of France began construction of the church of the Trinità dei Monti next to this monastery, to celebrate his successful invasion of Naples. Building work began in a French style with pointed late Gothic arches, but construction lagged.

The present Italian Renaissance church was eventually built in its place and finally consecrated in 1585 by the great urbanizer Pope Sixtus V, whose via Sistina connected the Piazza della Trinità dei Monti (outside the church) to the Piazza Barberini across the city. The architect of the facade is not known for certain, but Wolfgang Lotz suggests that it may have originated in a design by Giacomo della Porta (a follower of Michelangelo), who had built the church of Sant’Atanasio dei Greci, which has similarities, a little earlier. The double staircase in front of the church was by Domenico Fontana.

In front of the church stands the Obelisco Sallustiano, one of the many obelisks in Rome, moved here in 1789. It is a Roman obelisk in imitation of Egyptian ones, originally constructed in the early years of the Roman Empire for the Gardens of Sallust near the Porta Salaria. The hieroglyphic inscription was copied from that on the obelisk in the Piazza del Popolo known as Flaminio Obelisk.

During the Napoleonic occupation of Rome, the church, like many others, was despoiled of its art and decorations. In 1816, after the Bourbon restoration, the church was restored at the expense of Louis XVIII.

The inscriptions found in Santissima Trinità dei Monti, a valuable source illustrating the history of the church, have been collected and published by Vincenzo Forcella. 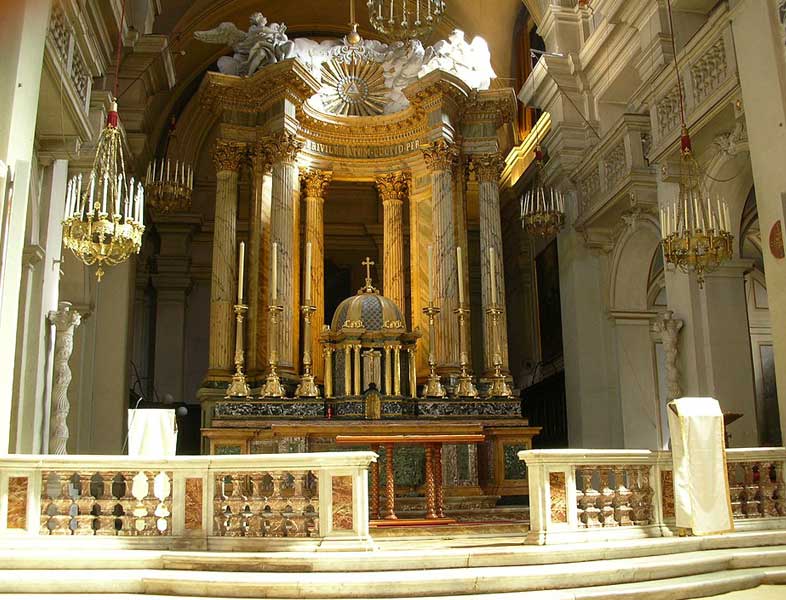 In the first chapel to the right is a Baptism of Christ and other scenes of the life of John the Baptist by the Florentine Mannerist painter Giambattista Naldini. In the third chapel on the right is an Assumption of the Virgin by a pupil of Michelangelo, Daniele da Volterra (the last figure on the right is said to be a portrait of Michelangelo). In the fourth chapel, the Cappella Orsini, are scenes of the Passion of Christ by Paris Nogari and the funeral monument of Cardinal Rodolfo Pio da Carpi by Leonardo Sormani. In a chapel near the high altar is a canvas of the Crucifixion painted by Cesare Nebbia.

In the Cappella Pucci, on the left, are frescoes (1537) by Perino del Vaga finished by Federico and Taddeo Zuccari in 1589. The second chapel on the left has a well-known canvas of the Deposition in grisaille, by Daniele da Volterra, which imitates in trompe-l’œil a work of sculpture; flanking it are frescoes by Pablo de Céspedes and Cesare Arbasia. The first chapel on the left has frescoes by Nebbia. In the sacristy anteroom are more frescoes by Taddeo Zuccari: a Coronation of the Virgin, an Annunciation, and a Visitation.

In a niche along a corridor that opens onto the cloister, is the fresco (reputed to be miraculous) of the Mater Admirabilis, depicting the Virgin Mary, painted by Pauline Perdreau, a young French girl, in 1844.

Our Lady of Mater Admirabilis 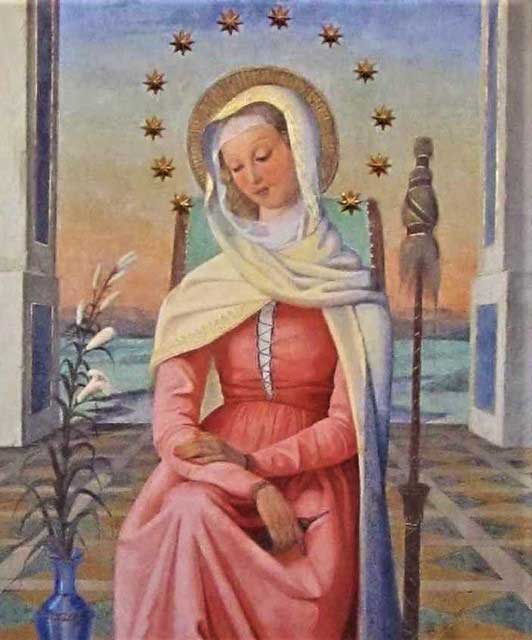 Mater Admirabilis is a fresco depicting the Virgin Mary, in the monastery of the Trinità dei Monti, in Rome. It was painted by a young French artist, Pauline Perdrau, and has been associated with several miracles.

Legend has it that Pauline asked the nuns at the Trinità dei Monti to paint a mural of the Blessed Virgin Mary. After weeks of painting, she finally finished her work. When the Mother Superior saw it, she said the colors were too bright and bold and immediately covered it with a large piece of fabric.

Years later, Pope Pius IX was visiting the church and questioned what was behind the cloth. The Mother Superior tried to distract the Pope from it, but he demanded to see it. When he drew back the fabric, it revealed what Pauline had painted years before, the colours having fading and blended together to create a much softer image. The Pope declared her Mater Admirabilis, “Mother Most Admirable”. 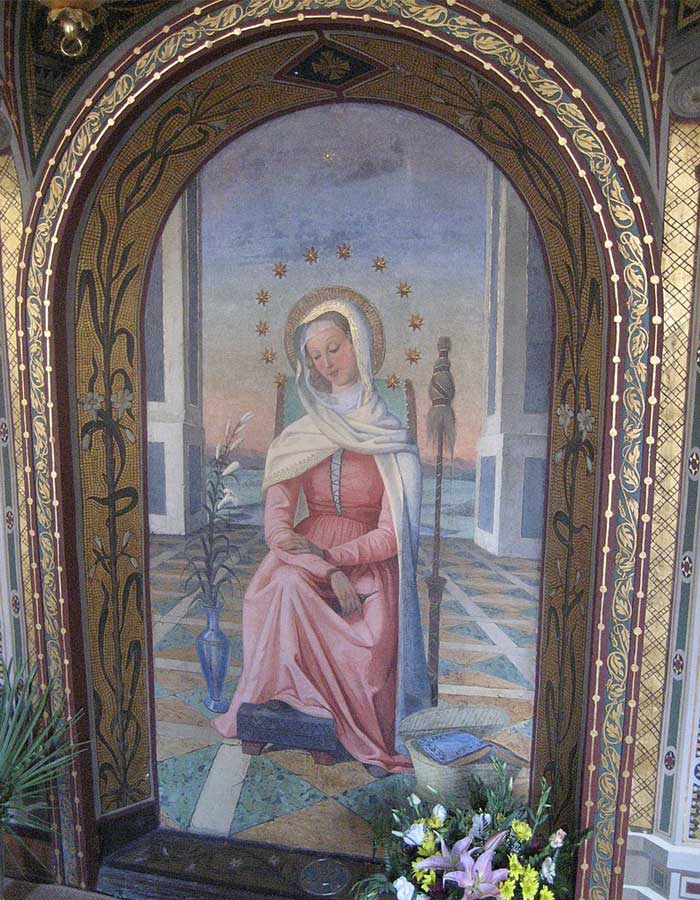 The refectory has a frescoed ceiling by Andrea Pozzo. In the cloister there is an astrolabes table, and along a corridor are the anamorphic frescoes (steeply sloping perspectives that have to be viewed from a particular point to make pictorial sense), portraying St John on Patmos and St Francis of Paola as a hermit all by Emmanuel Maignan (1637). An upper room was painted with ruins by Charles-Louis Clérisseau.

The Sisters of The Sacred Heart

In 1828, the site of Trinité-des-Monts was entrusted to a new community of that time, the Sisters of the Sacred Heart, a teaching congregation founded by Saint Madeleine Sophie Barrat.

To welcome the Virgin Mary into the convent was the wish of the young “novice” Pauline Perdreau. In the middle of the 19th century, she painted the “Mater Admirabilis” mural, in one of the corridors of the convent where the sisters of the Sacred Heart lived at that time. 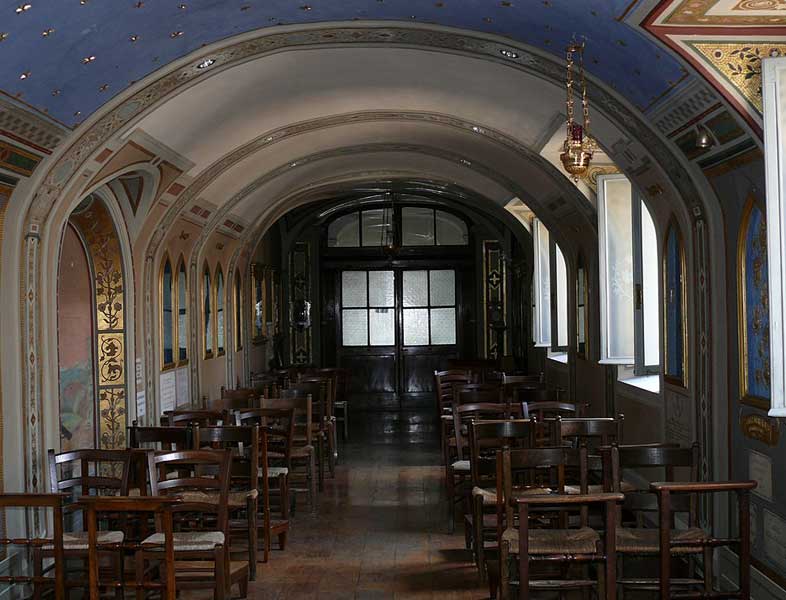 The kings of France remained patrons of the church until the French Revolution and the church continued to be the church of the Minimite Friars until its partial destruction in 1798.

It has been a titular church since the Titulus Santissimae Trinitatis in Monte Pincio was established by Pope Sixtus V in 1587 and has been held ever since by a French Cardinal. The current (2010) Cardinal Priest is Philippe Barbarin, Archbishop of Lyon and Primate of the Gauls.

By the Diplomatic Conventions of 14 May and 8 September 1828 between the Holy See and the Government of France the church and monastery were entrusted to the ‘Religieuses du Sacré-Coeur de Jésus’ (Society of the Sacred Heart), a French religious order, for the purpose of educating young girls.

In 2003 the French government were proposing to make funds available for necessary work on the church but was concerned that the Society might find it difficult to continue their work there in the future and in March 2003 the Society decided that it would withdraw from the Trinità no later than the summer of 2006. On July 12, 2005, the Vatican and the French Embassy to the Holy See announced that the Church, Convent and school would be entrusted from 1 September 2006 to the Monastic Fraternities of Jerusalem. 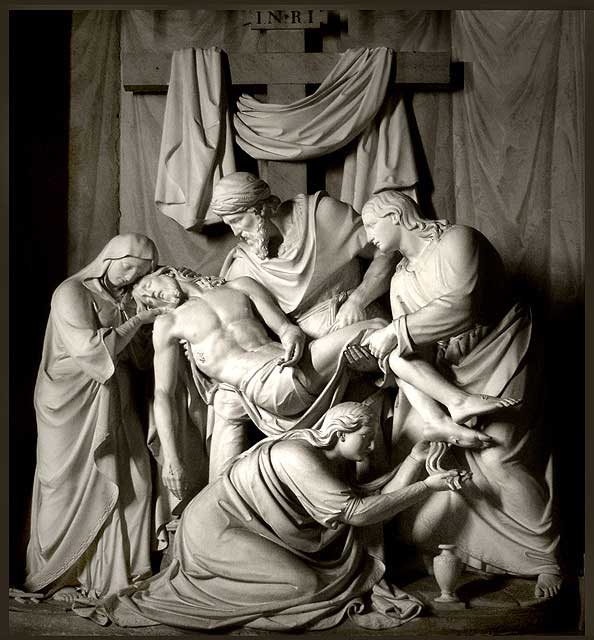 Annual Feast Day of Our Lady of Mater Admirabilis is held on 20th October.

Ciampino International Airport “G. B. Pastine” at Rome, Italy is the nearby airport to the Church.

Spagna Subway Metro Station in Rome, Italy is the nearby Train Station to the Church.