The Sanctuary of the Holy House of Loreto, Italy 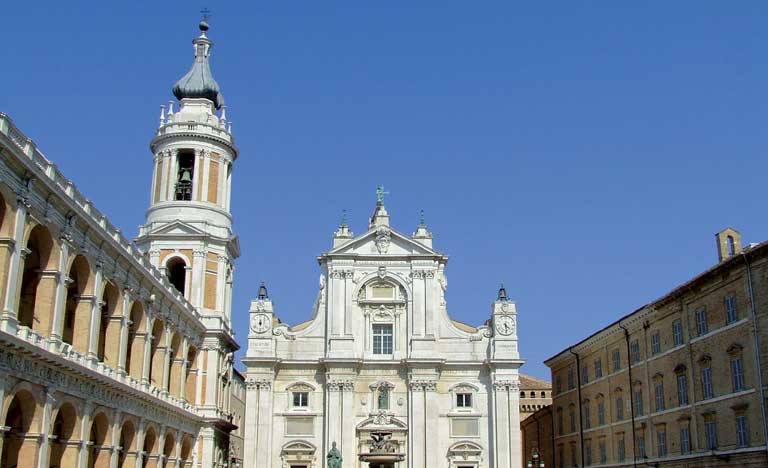 Home » The Sanctuary of the Holy House of Loreto, Italy 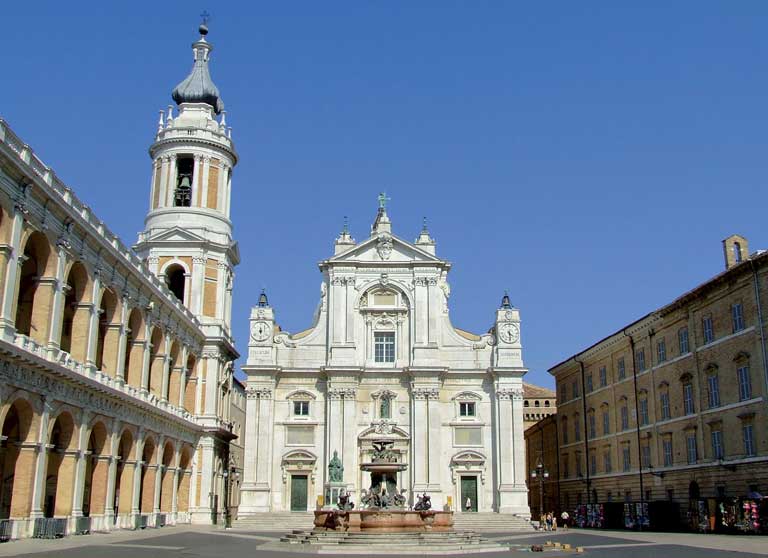 The Basilica della Santa Casa (English: Basilica of the Holy House) is a Catholic place of pilgrimage in Loreto, Italy, containing the house in which the Virgin Mary lived.

The Holy House of Our Lady of Loreto is “a rest for the soul”, a place to meet God, and sometimes the inspiring reason and source of strength for new enterprises.

A symbolic place of Christianity and home to the Holy House of Nazareth where Mary was born. A destination for pilgrims and art lovers.

It is the third largest shrine to Mary in Europe, next to Lourdes and Fatima. The ministry of the shrine is the hospitality shown to pilgrims especially through the sacrament of penance.

The splendid City of Loreto, tucked inside the countryside of the Marches Region, owes its fame to the Sanctuary (or Basilica) where the Santa Casa della Vergine Maria (Shrine of the Holy House of the Virgin Mary) is preserved and venerated. It is a holy place defined by Pope John Paul II as “the true Marian heart of Christianity.” The sanctuary has been one of the most important pilgrimage sites for the Catholic faith for centuries, having been visited by approximately 200 saints and beatified persons, as well as by numerous Popes. According to ancient tradition, and today substantiated by historical and archaeological research, the Santa Casa is the house from Nazareth where the Virgin Mary was born, educated, and where she received the Annunciation. The house was composed of one room in masonry, with three walls in stone placed so as to enclose a rock cavern. This cavern is worshipped by pilgrims who flock to Nazareth, that is to the Basilica of the Annunciation, while the three stone walls, as legend has it, were brought to Italy (first passing through Illyria) by crusaders expelled from Palestine in 1291. The walls arrived in Loreto in 1294. Not only, but documents and archaeological excavations have continued to reinforce the hypothesis that the walls of the Santa Casa were transported to Loreto by ship, an initiative undertaken by the Angeli Family, nobles who ruled over Epirus at the time.

The sanctuary (Santuario della Santa Casa) consists of the basilica of Saint Maria, beneath the dome of which is situated the Santa Casa, the Holy House of the Virgin, encased within a structure designed by Bramante in 1509. The birthplace of the Virgin in Nazareth was popularly believed to have been rescued from infidels by angels, who transported finally to its present location in December 1295. The basilica is a Late Gothic structure continued by Giuliano da Maiano, Giuliano da Sangallo and Bramante. The façade of the church was erected under Sixtus V, who fortified Loreto and gave it the privileges of a town (1586). The main entrance doors (1590-1610) to the church were cast in bronze by Antonio Lombardi and his sons; the doors depict scenes from the Old and New Testaments. The interior of the basilica is lavishly decorated. The earliest work was carried out by Luca Signorelli and Melozzo da Forlì.

History of Our Lady of Loreto 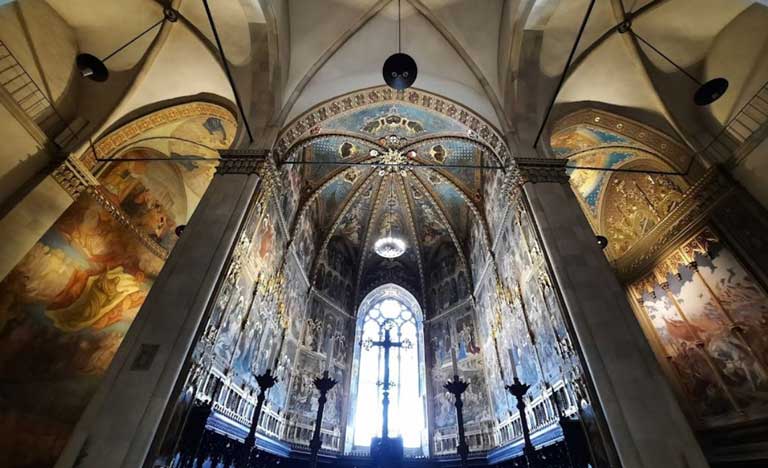 Indeed, one document dating back to 1294 (recently discovered), testifies that Niceforo Angeli, despot of Epirus, in offering his daughter Ithamar’s hand in marriage to Philip of Taranto (son of the King of Naples, Charles II of Anjou), gave the Prince a dowry that included such treasures as the “holy stones taken from the Home of our Lady the Virgin Mother of God.” In order to protect these humble stone walls, and to receive the ever-larger masses of pilgrims visiting the sacred relic, construction works on the magnificent Sanctuary of Loreto were begun in the mid-15th Century.  Some of the most prized works here are the marble paneling of the Santa Casa’s walls, commissioned by Julius II and realized on Bramante’s design from 1507. It is considered one of the greatest sculptural masterpieces from the Renaissance. Since its beginnings, great artists have adorned the Sanctuary one after the other through the centuries: from Cristoforo Roncalli (so-called Pomarancio), painter of the Treasury Room and the cupola; to Francesco Selva, who decorated the Sacristy Atrium; and Tiburzio Vergelli, architect of the majestic Baptistry. As a result, the sanctuary’s fame diffused rapidly throughout the world, and it became a privileged destination for millions of pilgrims.

As the works drew to their conclusion, then, it was Carlo Maderno who created the fountain in the Piazza del Santuario (1600), while the feat of the bell tower on the Basilica’s left side is attributed to Luigi Vanvitelli (1700).  The entire City of Loreto, immersed in the tranquility of the Marches’s quiet rolling hills, rose up around the Sanctuary della Santa Casa, constructed on a hill that offers a spectacular panorama touching both the sea near Monte Conero and the Umbro-Marches Apennine Mountain Chain. Today Loreto beckons to thousands of tourists – not just Catholics – for its grandiosity as a trove containing invaluable treasures. Besides the importance of the Santa Casa as object of pilgrim devotion, this site represents an authentic sacred art anthology that includes architectonic, sculptural, and painting master works by some of the most celebrated names in art history.

The Holy House itself is quite small, and its single room with a small altar contains a Black Madonna statue and a blue ceiling with golden stars. In 1469, a large Basilica was built over the Holy House. Having been remodeled and reconstructed numerous times over the ensuing centuries, the Basilica has a Renaissance exterior and a Gothic interior. In 1510 the Santa Casa was approved for pilgrimages, soon became extremely popular in Italy, and by the 16th century was receiving pilgrims from all over Europe. Surrounding the Holy House, and inside the Basilica, is a marble concourse which pilgrims use to circumambulate the shrine. The pilgrims will kneel to make their way around the shrine and the millions who have done this devotional act have worn two shallow troughs with their knees in the hard stone.

And the beautiful, charming borgo that developed around the Basilica offers remarkably-evocative vistas, externally and internally, e.g. the Museum-Painting Gallery in Piazza del Santuario featuring canvases by masterful Venetian painter Lorenzo Lotto. Thus, Loreto equals pilgrimage site, tourist locality and gracious city of art set amidst gorgeous scenery. Finally, worth noting is the Macerata-Loreto Pilgrimage, in existence since 1978 (when John Paul II became Pope): on this route thousands of pilgrims travel on foot every year, from Macerata to Loreto’s Sanctuary. Approximately half of the pilgrims originate from the Region of The Marches itself – the rest arrive in Macerata from all over Italy and various parts of Europe (particularly Belgium, Spain, Portugal, the republics of the former Yugoslavia, as well as Albania, Switzerland, and Germany).

An ancient tradition tells that the walls of the Shrine existed in Nazareth, Galilea: the Holy House is the same House where Our Lady Mary was born, grew up and received the angelic announcement.

This tradition, based on devotion and popular belief, ascribed the transportation of the House of Nazareth to an angelic mission; current historical studies have developed the hypothesis of transportation carried out by Man, through sea and land, that came true with special assistance from above. That’s the way “to read between the lines” and give the most probable explanation to the Holy House event. 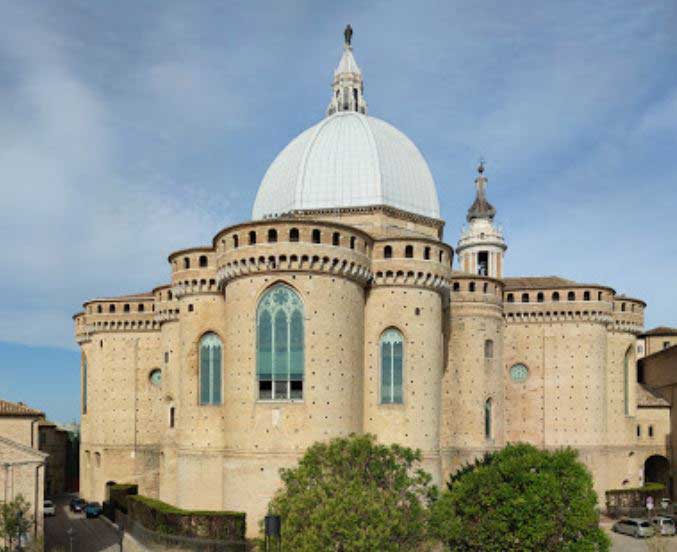 The Three Walls of the Holy House

The Holy Chamber can be clearly defined in two different parts. The lower section (from the ground up to almost 3 meters in height) is the original wall, made with sandstone blocks, built-in regular rows, as we could find in Nazareth; the upper section is added afterward with Marche local brick, the only building material used in the area with those methods of construction.

A graffito on the wall of the Holy House

The technique used for the external finish of some stones is similar to that employed by the Nabateans and was very popular in Palestine during the Roman empire.

About sixty graffiti have been found, and most are considered by experts to be similar to those of the Judeo-Christians in the Holy Land, including Nazareth, belonging to ancient times. 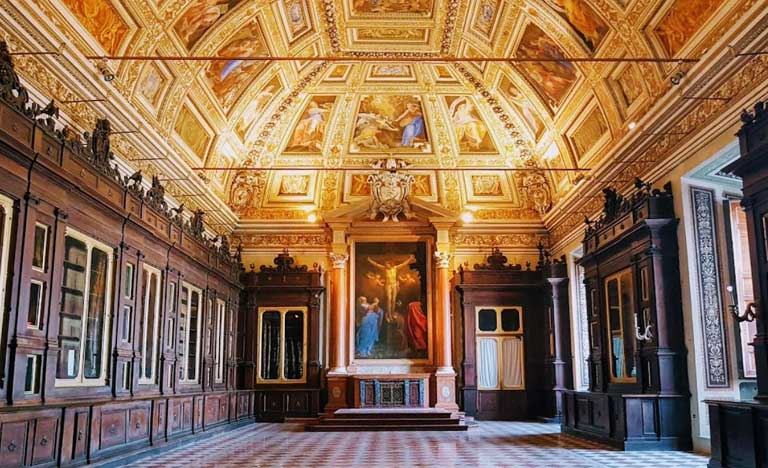 The Marble Screen was commissioned by Julius II, who sent Donato Bramante to Loreto in 1507 to do “great things” there and to “draw many works”.

The opera was realized under the direction of Andrea Sansovino (1513-27), Ranieri Nerucci, and Antonio da Sangallo il Giovane. The statues of the Sybils and of the Prophets were inserted in their niches in a later period.

The Marble Screen consists of a podium with geometrical ornamentations, with a series of aligned columns articulated in two sections, crowned by Corinthian capitals supporting a projecting cornice. The balustrade, by Antonio da Sangallo, cloaks the ungainly barrel vault of the Holy House and also provides an elegant frame encasing the marvelous edifice. 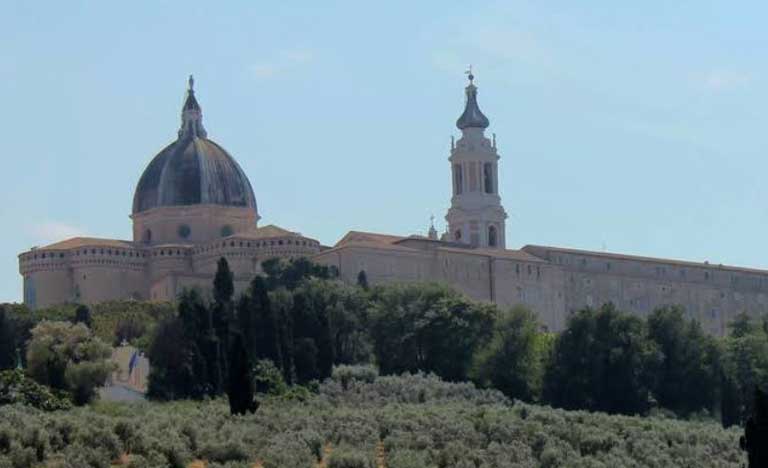 It hosts some wooden models of the Basilica, which are very helpful to understand the architectural phases of its building. It’s possible to visit all 22 rooms of the Museum; the exhibition includes some detached frescos, too.

Outstanding among the various objects are some estimable canvases by Lorenzo Lotto, a fine collection of Renaissance ceramics, and 10 Raphaelesque tapestries. The collection of ancient apothecary pottery of the Holy House, considered one of the finest of the genre, is made up of a core group of 350 specimens, coming from the Orazio Fontana workshop.

It was built as a defense for the Shrine against the attacks of the Turkish fleet that sailed on the Adriatic sea. It’s a symbol of the strong military attention carried on by different Popes (Sisto IV, Giulio II Della Rovere, and Leone X de’ Medici) to protect the Holy House.

The building of this huge “Basilica-Fortress” attracted several of the greatest architects such as Baccio Pontelli, Donato Bramante, Antonio da Sangallo, and Cristoforo Resse.

Their work clearly shows the evolution of military defense based on the new fire weapons; the medieval war was over, the modern war started and this was assumed by a different pattern of edification.
During the Middle Ages, the medieval religious belief in Indulgences had a significant role in sponsoring pilgrimages to the holy shrines. For each day spent at the shrine of Loreto, pilgrims believed they were granted a reduction of punishment for their sins. The shrine of Loreto also attracted pilgrims because of the many stories of miraculous healing that occurred over the centuries.

In 1920, the Virgin of Loreto became the patroness of pilots because of the legendary transport of the Santa Casa by angels. Each year, on September 8, the birth of the Virgin Mary, groups of pilots gather at the shrine to celebrate, to pray and give thanks for safe air flights, and to participate in a colorful procession. A statuette of Mary accompanied Charles Lindbergh on the first solo airplane flight across the Atlantic and a Loreto medallion was taken on the Apollo 9 mission to the moon.

On December 10, there is a festival celebrating the arrival of the Holy House in Loreto. The Virgin of Loreto is also considered the patron saint of emigrants, and expectant mothers often visit the shrine to pray for protection and blessings of their families. Today Loreto is one of the most visited pilgrimage sites in Europe and an estimated 4 million visitors arrive each year.

How to reach Loreto

The shrine of Our Lady of Loreto is located on the Adriatic coast of Italy, three hours from Rome.

Falconara Marittima Airport, from which is possible reach Loreto in thirty mins by taxi, or renting a car. Alternatively there is a Bus or Taxi Service up to Ancona railway station.

Highway “A14 Bologna-Taranto”, exit “Loreto-Porto Recanati”, and driving for about 3 kms.

Line “Ancona-Pescara”, Loreto railway station, or Bus Line Ancona-Loreto. Loreto is provided with a railway station afar about 2 kms from its historic centre, towards sea.