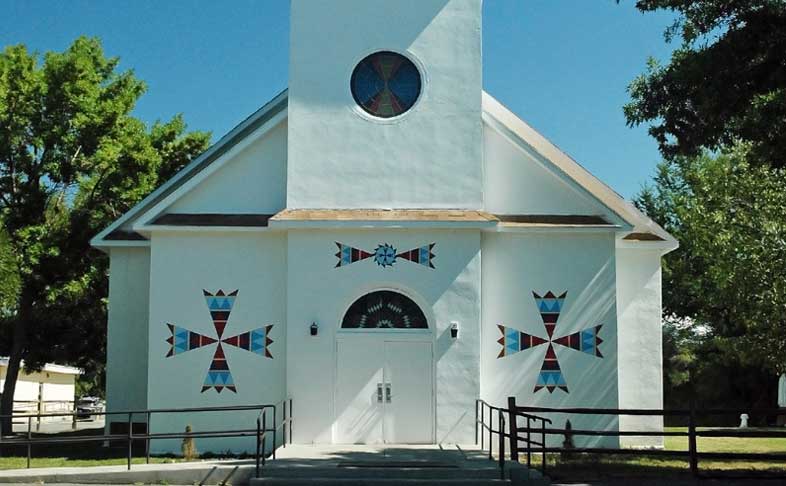 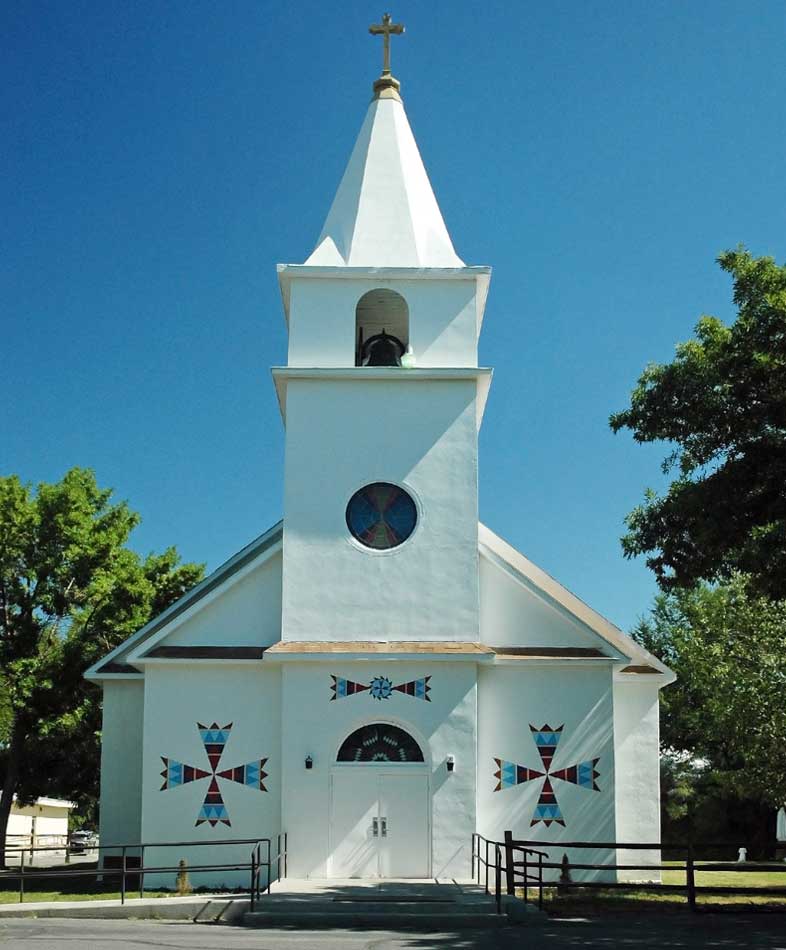 St. Stephen’s Indian Mission Roman Catholic Church is located at Wyoming, United States. In the mid 1800’s, amid turmoil between Native Americans and encroaching white settlers, the United States Government established a “Peace Policy.” The goal of the policy was to relocate Indian tribes from their ancestral homes to land set aside for them. These land allocations are known as “reservations.” The policy also called for religious men, nominated by churches, to oversee the Indian agencies and to teach Christianity to the native tribes.

The key to the Government’s desire for Indian assimilation was by the process of education. So, in addition to having regulatory power and maintaining churches, several Christian organizations took the opportunity to setup schools within the reservations. The Jesuits founded numerous Catholic missions among the Plains Indians, including Saint Stephen’s Indian Mission Church.

By the late 1870s, the reservation policy was regarded as a failure, primarily because it had resulted in some of the bloodiest wars between Native Americans and the United States. By the end of the 1800’s, all religious organizations had relinquished their authority to the federal Indian agency. However, the schools and churches remain. 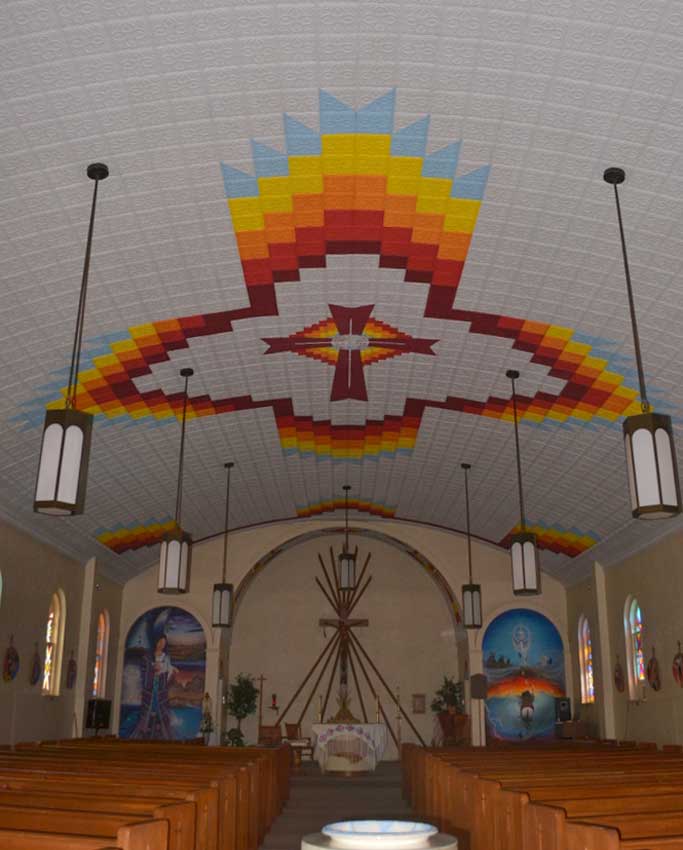 The Jesuits who founded numerous Missions among the Plains Indians in the 1880’s, including Saint Stephen’s Indian Mission Church were aware of the changed circumstances brought about by the reservation system. The key to the Government’s desire for Indian assimilation was by the process of education. Chief Black Coal of the Northern Arapaho spoke of this as early as 1878 when he said:

Bishop James O’Connor, the Catholic Bishop of Omaha, whose diocese then included what would soon (1890) be the new state of Wyoming, heard that the Federal Government was planning a school for Indian children on the Wind River Reservation at Fort Washakie, the Agency.

O’Connor had already collected $5,000 to be used in some way for the Indian people of the Reservation and, on hearing of the school plans, the Bishop offered the money for fitting the interior of the new school building, if the government would accept the Church’s offer and let the Bishop operate the school. O’Connor then made arrangements with the Buffalo, New York Mission of the Society of Jesus to send Father John J. Jutz, a Germain Jesuit, to found the new mission.

Father Jutz arrived at Lander, a town on the south-western edge of the Reservation, sometime during the week of April 20, 1884, only to find to his dismay that the Agency had already assigned the school, which was to operate principally among the Shoshoni, to the famous Welsh Episcopal minister, the Reverend John Roberts. It was then that Jutz heard that the Northern Arapaho lived at the far east end of the Reservation and might be open to the idea of a school in their area, having already sent some of their children to schools in the East.

Jutz arrived in May, 1884 at Black Coal’s camp near the confluence of the Little and Big Wind Rivers (about four miles from the modern city of Riverton).  Father Jutz was soon joined by Jesuit Brother Ursis Nunlist who came to help build the new mission. In a letter sent East, dated August 12, 1884, Jutz noted that he and Brother Nunlist had commenced work on a “a school and dwelling house,” the latter being a four room 24 by 24 foot building which served as chapel, sleeping quarters, kitchen, reception room, and workshop… the beginnings of St. Stephen’s Indian Mission Roman Catholic Church. 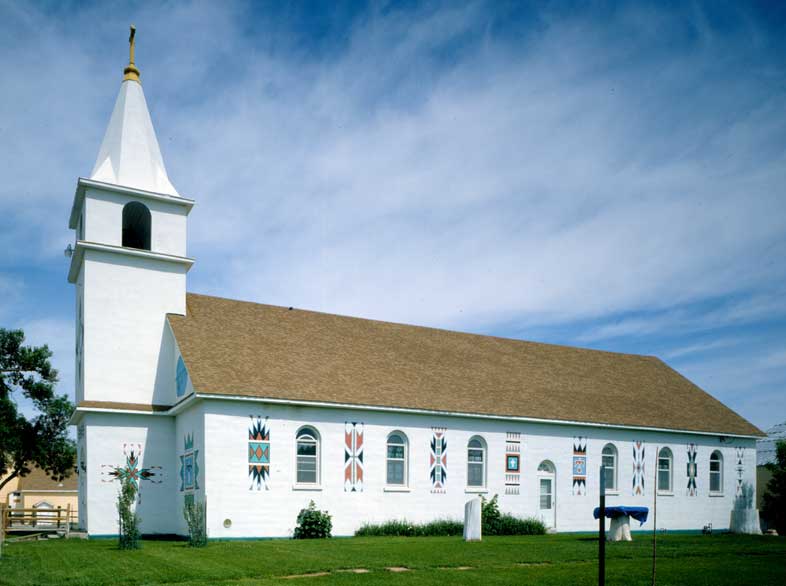 The Wind River Indian Reservation occupies more than two million acres in central Wyoming. Saint Stephen’s Indian Mission Church located in the south-eastern part of the reservation just south of Riverton, is one of three missions established on the reservation in the late nineteenth century.

A Catholic mission at St. Stephens was originally established by Father John J. Jutz, a Jesuit priest, who built a four-room mission house on land selected by the Arapaho chief Black Coal in 1884.

The church is a simple rectangular building with a front entry topped by a square tower rising to a steeple. Its stuccoed exterior is painted white and decorated with traditional Arapaho designs and symbols on the front and side walls.

The designs were created by Raphael Norse, an Arapaho artist, in 1970, and fill the spaces between the windows on both side elevations of the church. Norse also designed the decorations flanking and above the doorway. 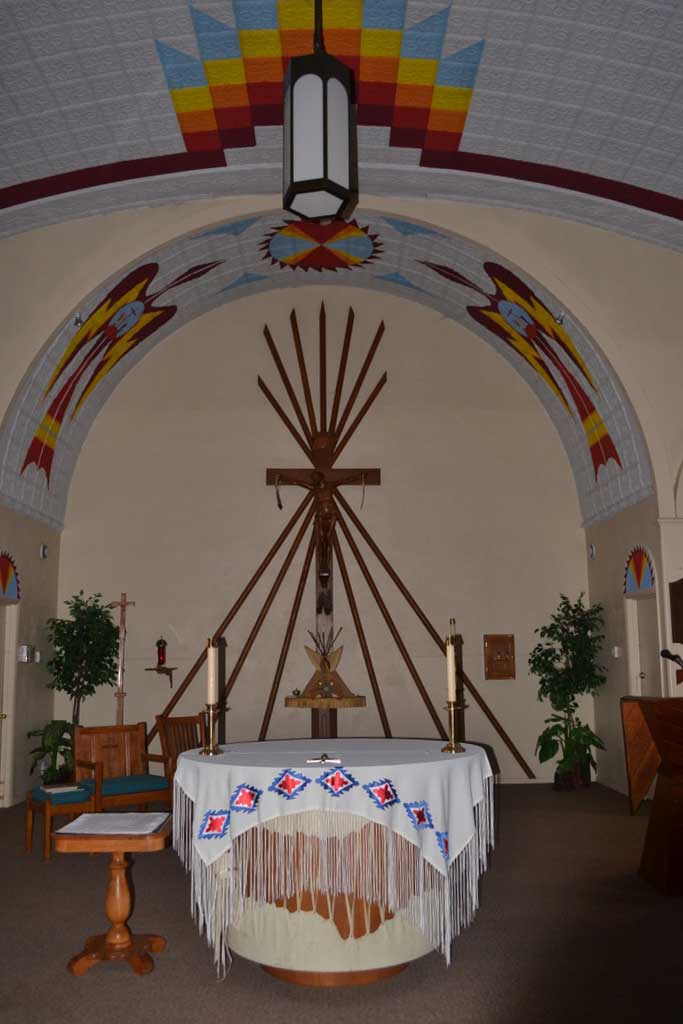 The decorative motif is carried into the interior, which features pressed tin ceiling tiles painted in a bright, geometric pattern and murals on either side of the altar. The interior is an interesting mixture of Roman Catholic and American Indian symbols, with the baptismal font and altar in the shape of drums.

A lectern in the shape of a thunderbird, and a crucifix composed of poles arranged like those of a tipi. The murals and the fourteen stained glass windows that light the church were designed and crafted by local Arapaho artists in the 1990s. A central aisle with pews on either side leads from the entrance to the altar.

Saint Stephen’s Indian Mission Church also existing on the site is the former boys’ dormitory and school (1928) that now serves as a post office, community center, museum, and gift shop; Sister Incarnata Hall, a two-story, Italianate brick building with a low hipped roof that is used for various parish and school events; and a gymnasium/auditorium/classroom building added in 1954.

These buildings represent the U.S. government’s early attempts to educate tribal children in Euro-American culture by establishing boarding schools. On the Wind River Indian Reservation, the task was given over to the Episcopal church, which established a school at Fort Washakie, and the Catholic Church, which established mission schools in Ethete as well as St. Stephens.

Saint Stephen’s Indian Mission Church also operated as a boarding school until it was converted to a day school in 1939. In 1975, the mission administration ceased operations due to lack of funds, and control of the facility was transferred to the St. Stephens Indian School Educational Association, a local American Indian corporation.

The current St. Stephens Indian School, a K-12 facility supported by the Bureau of Indian Affairs, is located across the street from the St. Stephens Church. The church, museum/gift shop, and grounds are open to visitors.