Sanctuary of Our Lady of Remedies, Cholula, Puebla, Mexico 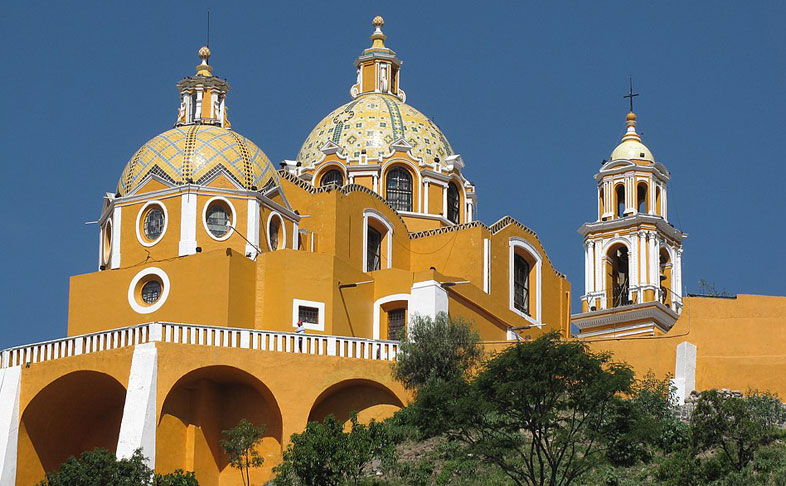 Home » Sanctuary of Our Lady of Remedies, Cholula, Puebla, Mexico

Sanctuary of Our Lady of Remedies, Cholula 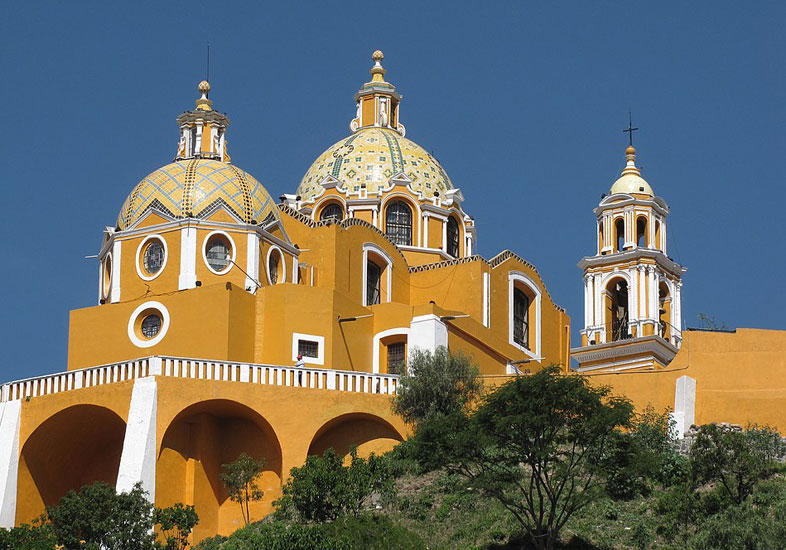 The Iglesia de Nuestra Señora de los Remedios (Our Lady of Remedies Church) is a 16th-century Mexican Catholic parish church built atop the Tlachihualtepetl pyramid in the municipality of Cholula located in the central Mexican state of Puebla. The church was built with carved stone and embellished with 24-carat gilded panels and shims, called laminilla. It has an altar in the neoclassical style. It was built between May 1574 and August 1575 and consecrated on March 25, 1629.

The base on which the church is built is one of the largest pyramids of the ancient world, being 54 metres (177 ft) high, covering 54 acres and shaped by several superimposed structures over the course of six centuries.

The Sanctuary of Our Lady of Remedies, Cholula, built on the covered pyramid of Cholula, which has been dedicated since 1594 to the virgin of the same name, which symbolizes the evangelization of the indigenous people by the Spanish. From its atrium you have a spectacular view of the four cardinal points, especially the Valley of Puebla that is to the east. It has a colorful neoclassical altar inside, as well as the rest of its decoration.

History of Sanctuary of Our Lady of Remedies, Cholula 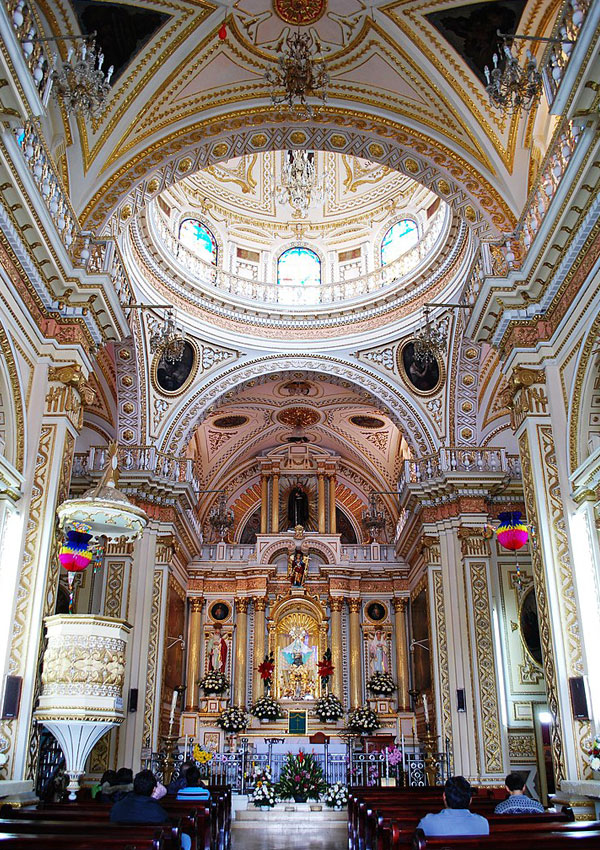 The Sanctuary of Our Lady of Remedies, Cholula – The defeat suffered by Hernán Cortés in the battle of the Noche Triste led to a hurried escape of the survivors up to Naucalpan. Along the way they suffered the loss of many soldiers and native allies as well as notable hostages, such as some children of Moctezuma.

The Spanish sheltered and recovered in the Indian temples until they could turn to fight the Aztecs at the Battle of Otumba. Legend tells that one of Cortés’s soldiers, Gonzalo Rodriguez de Villafuerte, had with him one of the little religious images known as castrenses, and he hid it among the aloes in order to carry out a devotional action of thankfulness.

The legend tells that during the battle, a young girl threw dirt in the eyes of the attacking natives helping to seal the Spanish victory.

No more graphic name than “Los Remedios” to explain the history of this Sanctuary. The defeat suffered by Hernán Cortés, in the battle of the sad night, put the survivors in haste to flee to the ceremonial center built for the veneration of their idols in the place called Naucalpan: place of the four houses. We know that they suffered heavy casualties and even the loss of notable hostages such as some of Moctezuma’s sons.

The conquerors fortified themselves in the Indian temples until they were able to go out to Otumba. There is a legend that one of Cortés’s soldiers, Gonzalo Rodríguez de Villafuerte, brought one of these tiny images, also called military figures, that coiled to the touch of the horse, and hid it among the magueyes to later pay him a vote of thanks. It is also said that during the battle, a sweet girl threw dirt in the eyes of the attacking indigenous people, favoring the Castilian victory. 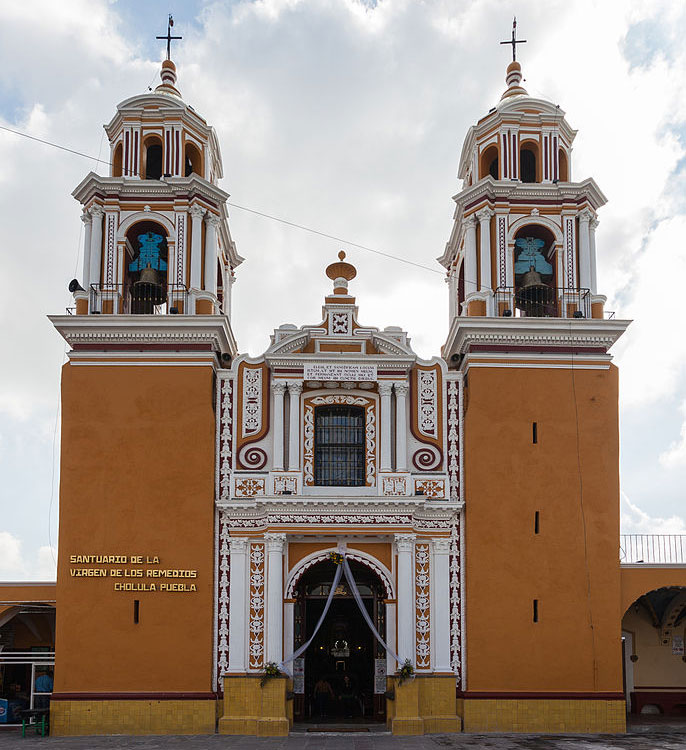 The Sanctuary of Our Lady of Remedies, Cholula – Recognizing the significance of the pyramid mound, the Spanish chose to construct a church upon the remains of the native temple grounds. The church is situated atop the Tlachihualtepetl (Grand Pyramid). Its worship, like that of its pre-Hispanic native predecessors, is associated with the propitiation of the rain.

This archeological structure consists of several superimposed pyramids, accumulated over six centuries. The base is 450 m (1,480 ft) on each side and 54 m (177 ft) high, twice as large as that of the Pyramid of the Sun in Teotihuacan and four times bigger in volume than that of Keops in Egypt.

In the early 1930s, knowledge about the Great Pyramid was scarce. Exploration began in 1931 under the direction of the architect Ignacio Marquina. After 25 years, eight kilometers of tunnels had been excavated, enabling the discovery of the seven superimposed pyramids. (In the second one the Mural of the Butterflies was discovered, and in an attached building they found the Mural of the Drinkers, depicting more than a hundred human figures in a ceremony in honor of Octli, the god of pulque.)

The basilica was built with carved stone and it was ornamented with 24-carat gold leaf lamella. The altar has a neoclassic style like the rest of the decoration. In 1595, the painter Alfonso de Villasana crafted the pictures seen on the walls of the basilica.

Image of Our Lady of Good Remedies 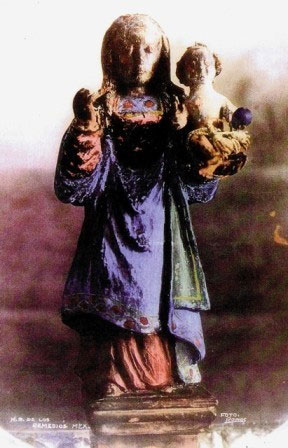 The image of Our Lady of the Good Remedies that protects the church is 27 cm high and is carved and gilded. It arrived on Mexican soil in 1519 with Captain Juan Rodríguez de Villafuerte, who brought it from the Basque Country, Spain, to protect him during the campaign. Various versions exist of a legend about its prior history and origins as far back as 700 AD. It was in Veracruz where Rodríguez de Villafuerte presided at the first mass celebrated in Mexico, on April 21, 1519, the same year as Hernán Cortés’s mandate was affirmed by the Spanish in the Templo Mayor of Tenochtitlan.

In 1520, when the Spanish under Cortés were defeated by the Aztecs while fleeing by way of Naucalpan, de Villafuerte concealed the image in a native temple on the highest part of the hill of Otocampulco. Twenty years later, indigenous people discovered it there under an aloe plant, and from then on, the virgin was kept in the house of the chief of San Juan Totoltepec, until he built a chapel. On the map of Santa Cruz, this chapel is shown with the name of Our Lady of Victory.

Since 1594, the church has been dedicated to Our Lady of Good Remedies.

Our Lady of Good Remedies 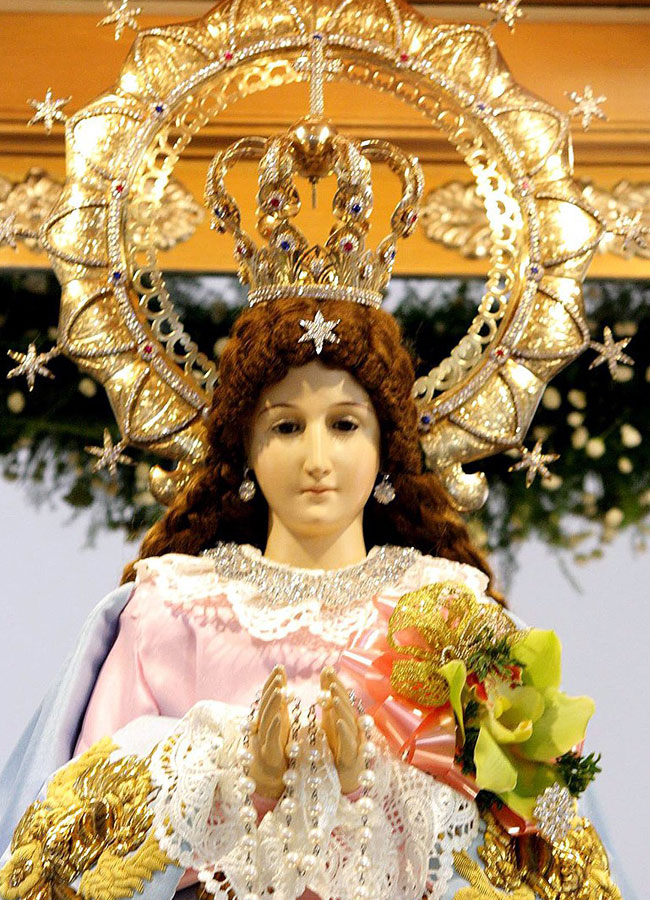 In 1519 Cortez brought with him a famous little statue to participate in the conquest of Mexico. The statue was first set up in a temporary chapel in one of the rooms of Montezuma’s palace where the Spanish officers made their devotions.

On the terrible night when the Indians rose against the Spanish conquerors, the Night of Sorrows, one of the officers rescued the statue before fighting his way out of the palace. He did not get far when he was cut down by Aztec arrows and died at the foot of a Maguey tree. The tiny statue was either pushed or it fell into the roots of the tree where it was overlooked by the Indians.

Some twenty years later, an Aztec convert, Prince John the Eagle, was walking near the tree when he heard a sweet voice calling him. Puzzled, he went to the nearby mission of the Franciscan Fathers and told them about it. They thought it was his imagination. Some days later John met with an accident, a large pillar of a church under construction fell on him. Badly crushed, he was given the Last Sacraments.

During the night when he was thought to be dying, the memory of the sweet voice kept returning to him. He prayed to Our Lady to help him. Very early in the morning the Virgin Mary appeared to him and gave him a sash to wear which cured him. A few days later he passed the tree again, and heard the sweet voice; curiously, he looked carefully around the roots of the tree; half buried in the sand, he found the tiny statue of Our Lady.

The Aztec convert thought he should do something about it. “Come home with me, gracious Lady,” he said, “I will see that you have a good home and are cared for.” He brought the little statue home wrapped in his cape and placed it on a rough altar.

History of Our Lady of Good Remedies 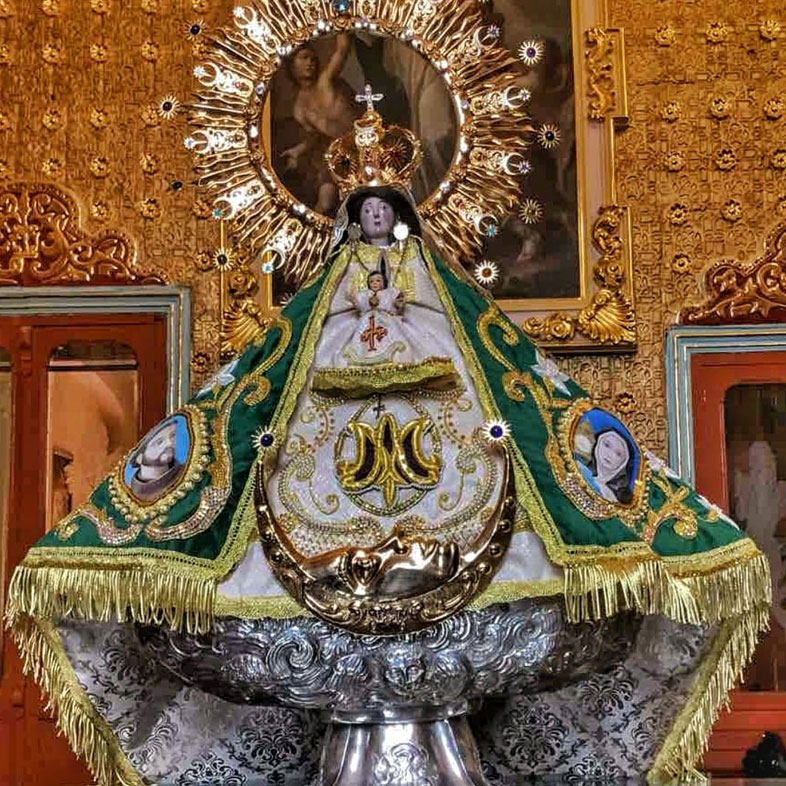 Here Mary reigned as queen in the humble home for ten or twelve years. John kept the little shrine supplied with flowers, and occasionally with fruit and pretty stones. Gradually people came to pray at the shrine, their number increasing so that they were under foot day and night. John took up the local school-master’s suggestion to build a little chapel. He set about building a shrine and enthroned Mary, Our Lady of Good Remedies, there.

The next day to his horror, the statue of Our Lady was gone. Lonely and sorrowful, John went to the Maguey tree where he had first found her – lo and behold, there she was! He returned the statue to the new shrine and decorated it carefully, but it disappeared again just when John became ill with fever, which was often fatal in that land. John’s relatives hurried to carry him to Our Lady’s feet in Guadalupe. As he lay gasping before the shrine of Our Lady of Good Remedies he heard the same sweet voice say: “Why do you come to my house when you put me out of yours?”

John apologized and she continued, “If you did not want me in your house, why not take me back to the Maguey tree and build me a chapel there?”

“If you cure me, Lady, I most certainly will,” promised the sick man. He was cured by Our Lady of Good Remedies, and he was as good as his word. He built a chapel into a hermitage and spent the rest of his life there.

Years later, after John’s death, the shrine fell into ruins. In 1574 the Spanish governor happened to see the ruins and was told the story. He ordered the building of a beautiful church to house the statue. At one time during an Indian uprising the Indians determined to exile Mary as dangerous to their tribe.

After the danger had passed, Mary was reinstalled in the church. She was called Our Lady of Good Remedies and also “The Little Lady of the Rain,” because she brought relief to the dry areas there. Other cities sometimes borrowed her for a procession around their parched fields, begging her to help them – which she always does. 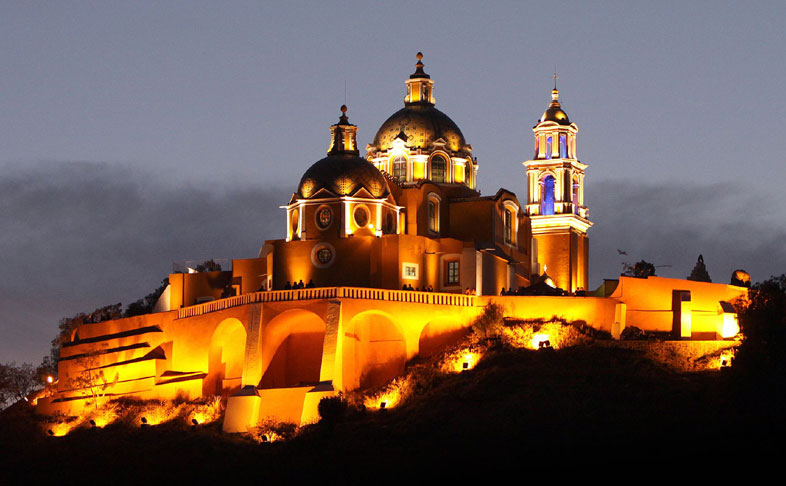 Annual Feast Day of the Nativity of the Blessed Virgin Mary held on 8th September.

How to reach the Sanctuary

Terminal Cholula Tren Turistico at Cholula, Puebla, Mexico is the nearby Train Station to the Sanctuary.