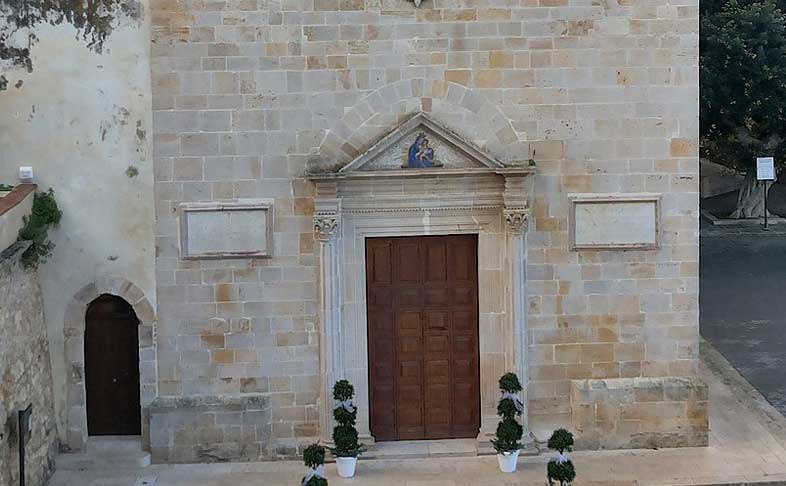 Sanctuary of Madonna of Miracles, Alcamo 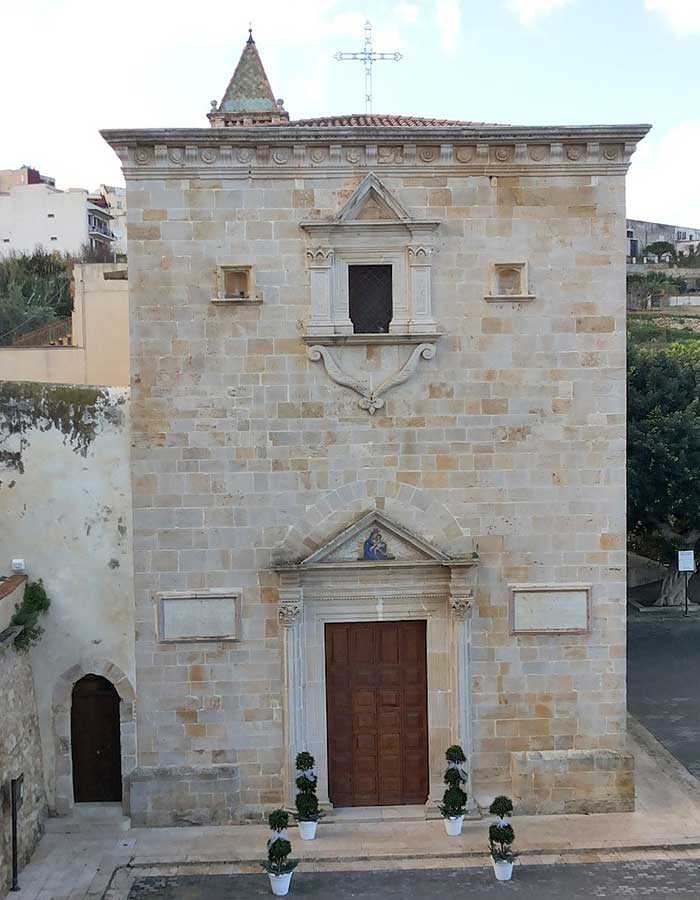 The Sanctuary of Madonna dei Miracoli (“Holy Mary of Miracles”) is a church in Alcamo, province of Trapani, Sicily, southern Italy; it is dedicated to the Madonna of the Miracles (the patron saint of Alcamo).

The sanctuary was built in 1547 by order of the governor and captain of justice of Alcamo Fernando Vega and following the discovery of an icon of Madonna of Miracles in a small chapel which had been abandoned. Afterwards the sanctuary was modified several times, with a restoration in the first years of the 18th century.

In 1754 it was aggregated to the Basilica di Santa Maria Maggiore of Rome; in 1784 there was the solemn coronation of Our Lady of Miracles. In 1901 they founded here the pious congregation Le predilette di Maria.

In 2015, in connection with the Extraordinary Jubilee of Mercy, the sanctuary was proclaimed “Holy Door” of Alcamo, together with the Basilica of Our Lady of the Assumption.

History of Sanctuary of Madonna of Miracles, Alcamo 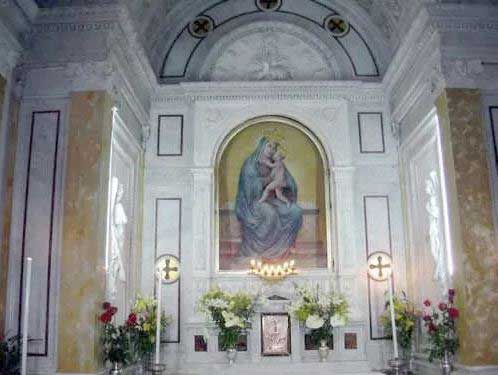 The 61 shrines dedicated to her and present throughout the city are testimony to the great devotion of the people  for Our Lady of Grace in Alcamo.

According to tradition, some ordinary women, including a blind and a deaf, while intent on washing clothes at the stream, saw a Woman appear with a Child and were hit by a flurry of stones that were moved during the apparition, without however suffering any injury or pain; on the contrary, after being hit by the stones, they felt a strange sense of well-being and recovered. After hearing this news, the husbands of the women, thinking it was a hoax, went to investigate the incident, thinking that there was someone hidden in the bushes around there, but they did not find anyone.

The local authorities then investigated the place, who cut down a nearby grove finding the ruins of the “cuba”, an ancient mill arch which had been lost for a long time, and inside a fresco on stone by an unknown painter of the thirteenth century, depicting the Madonna and Child Jesus, to whom the faithful initially gave the name “Madonna Fonte della Misericordia” – Our Lady, Fount of Mercy.

After this discovery, the people of Alghero began to pray in the presence of the found image and several miracles occurred in the following days.

Starting from 1547, the Madonna dei Miracoli – Our Lady of the Miracles, thus became the patron of the city of Alcamo, and of other neighboring municipalities. The recovered image of the Mary was initially given the name “Our Lady, Fount of Mercy”, but due to the high number of miracles that followed, in 1583 the name was changed to “Our Lady of the Miracles”.

Right on the site of the discovery, the Spanish nobleman Don Fernando de Celada y de Vega, at that time governor of Alcamo, decided to erect the sanctuary in honor of the patroness of the city. 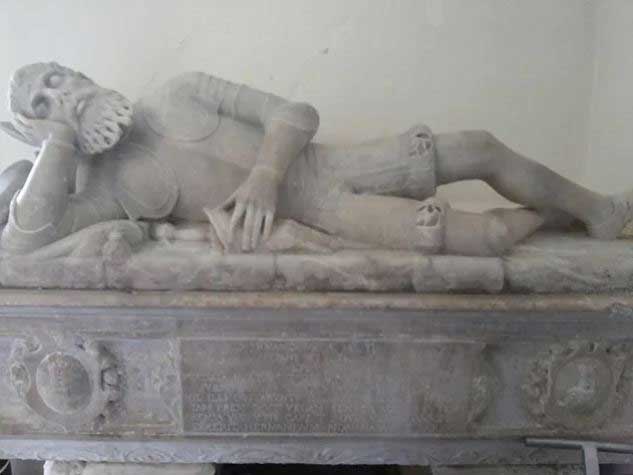 You can reach the sanctuary through a downhill pebbled footpath which leads to a large flight of steps near the church. The sanctuary, in a Baroque-Renaissance style, has got two façades with two different portals with fluted columns and Corinthian capitals, has a grandstand window flanked by two smaller windows carved by Innocenzo Arcodaci.

The interior of the sanctuary has a single nave with 8 altars, there are also some stuccoes by Nicolò Curti made in 1762.

The interior is decorated with stuccos and on the vault there is a fresco of the glorification of the Madonna dei Miracoli. Of artistic significance are the paintings by the painter Giuseppe Pataria and the chapel dedicated to Maria Santissima dei Miracoli – Mary, Most Holy of the Miracles, with a red marble round arch. In 1557, in honor of the noble Fernando Vega, a sarcophagus of white marble with the figure lying was built by Rocco Rapi.

These are the other works:

Our Lady of Miracles 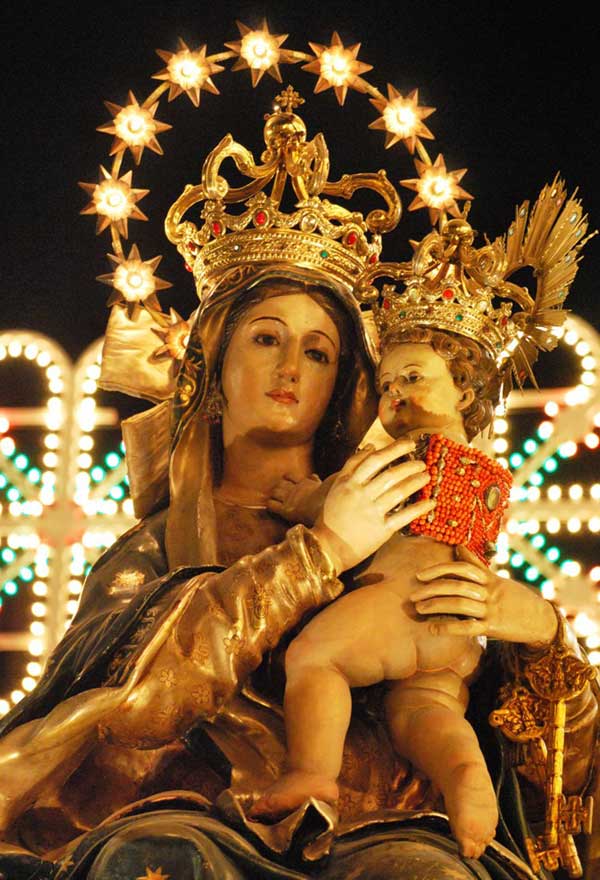 According to tradition while washing their clothes in the torrent, the women, with a blind and a deaf one among them, saw the apparition of a woman with a child and were hit by a gust of pebbles moved during the apparition, but without getting any injury or pain; on the contrary, after being hit by the pebbles, they strangely felt a certain sense of wellbeing and recovered their health. After learning the news, the women’s husbands, thinking that it was a joke, went to investigate about the event, thinking that someone was hidden among the bushes around there, but they didn’t find anybody.

Then the local authorities inquired on the spot, cut down the near grove and found the ruins of a “cuba”, an old arc of a mill that nobody remembered any longer, and inside there was a fresco on a stone made by an anonymous painter of the 13th century representing Our Lady with the Child Jesus, which at first the believers called “Madonna Fons Misericordiae” (that is Our Lady Source of Mercy).

After this discovery all the people started praying before the image rediscovered and in the following days there were several miracles.

The Madonna’s discovered image was first called “Our Lady Source of Mercy”, but thanks to the high number of subsequent miracles, in 1583 the name was changed into “Our Lady of Miracles”.

Further to these events, Don Fernando Vega, Alcamo’s governor and justice captain, ordered the construction of the Sanctuary of Our Lady of Miracles, which hosts the Madonna’s image. Inside the Church there is a white marble sarcophagus containing the mortal remains of the governor Don Fernando Vega, according to his will. 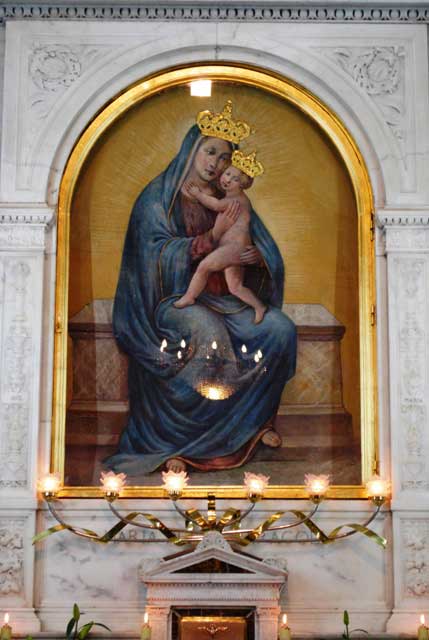 Traditionally, during the month of May (dedicated to Our Lady), believers go to the sanctuary through the footpath, saying their prayers during the descent. Every year, on 19, 20 and 21 June, inside the Church there are the celebrations in honour of Madonna of Miracles: this is the most important religious feast in Alcamo.

The “bell of the sacred bronzes” which opens the celebrations together with the outbreak of firecrackers and the passage of the musical band through the streets of the city of Alcamo; in the past the band of Alcamo was also joined by the band of the city of Partinico.

The Holy Mass in honor of Our Lady of the Miracles in the Basilica of Santa Maria Assunta (also called the “Mother Church”), in which all the brotherhoods and lay groups of the city of Alcamo participate.

The descent to the Sanctuary of the Madonna dei Miracoli (called “calata”), which is also attended by the civil and religious authorities of the city (including the mayor of Alcamo), preceded by the banner of the city of Alcamo. In ancient times, animals that had recovered from a disease were also brought to the sanctuary. Vespers and the Eucharistic blessing are performed inside the sanctuary.

The procession of the statue of the Madonna dei Miracoli through the city streets and return to the mother church. Before this solemn procession, the statue of the Madonna dei Miracoli, created in 1720 by Lorenzo Curti di Castelvetrano, is decorated with a silver star, a crown and a clasp embellished with precious stones (called “tuppu di la Maronna”) which is placed behind the neck of the image. 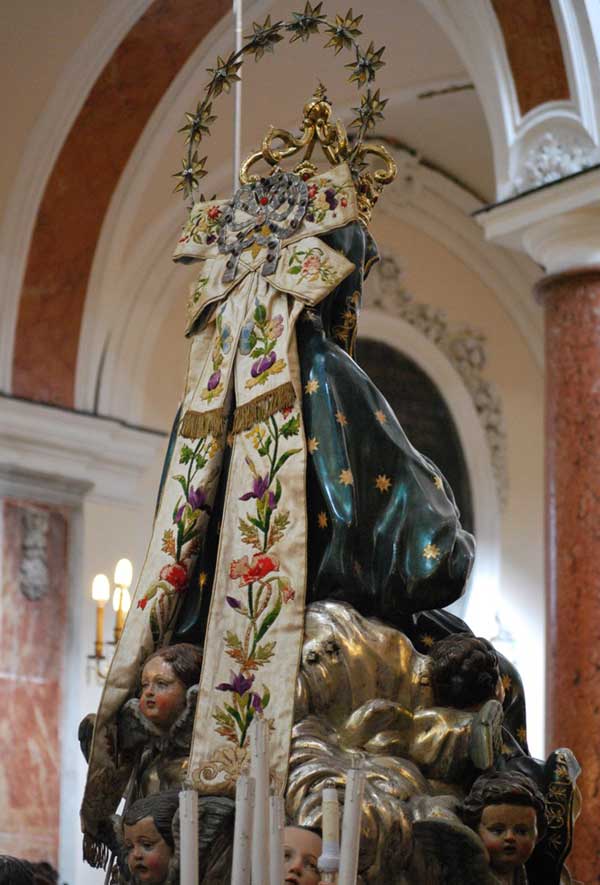 The statue is then brought out of the mother church, and is carried on the shoulders of the faithful through the streets of the city, accompanied by the musical band and at the end of the evening returns to the mother church.

Pyrotechnic games near the so-called “bastion” in Piazza Bagolino. They are held at the end of the party, immediately following the return of the image to the mother church, around midnight.

The traditional descent to the sanctuary is also staged during the so-called “Historical Procession” carried out with costumes of those times. This procession, which anticipates the actual “descent”, passes through Corso VI Aprile and Piazza Ciullo, and then ends at the Castle of the Counts of Modica. The procession also includes the workers of the “I Cavalieri di San Giorgio” association.

Since 1615, the year in which Alcamo was seriously hit by pestilence, there is the so-called “Penitential Procession” of Madonna of Miracles. It takes place on the third Sunday of Lent: the Madonna’s statue is brought from the Basilica of Our Lady’s Assumption to the Church of Saints Paul and Bartholomew, where it remains for a week and is solemnized, then it goes back to the mother church.

Every year in Alcamo there are the celebrations in honour of Our Lady of Miracles since 19 June until 21 of June. This is the most important religious and folkloristic festivity in Alcamo.

Sanctuary of Madonna of Miracles,
Via 91011, Via Longarico,
29, Alcamo TP, Italy

How to reach the Sanctuary

Falcone Borsellino Airport or Palermo International Airport is located at Cinisi, Metropolitan City of Palermo, Italy is the nearby airport to the Sanctuary.

Alcamo Diramazione Transit Station in Trapani, Italy is the nearby Train Station to the Sanctuary.