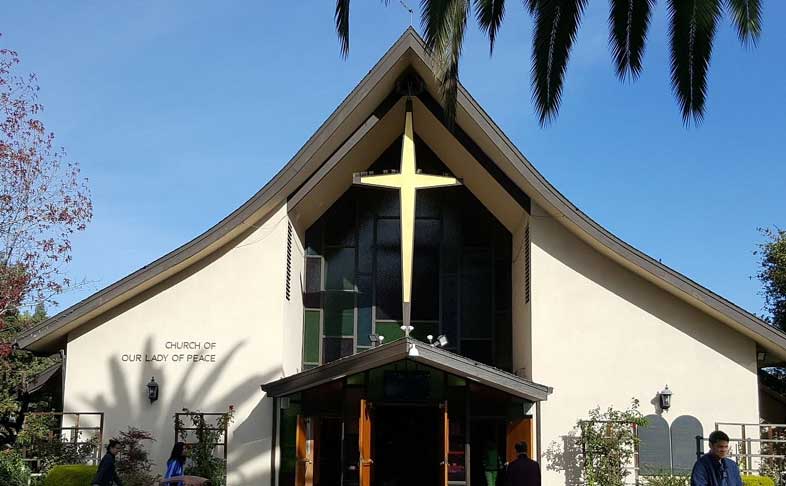 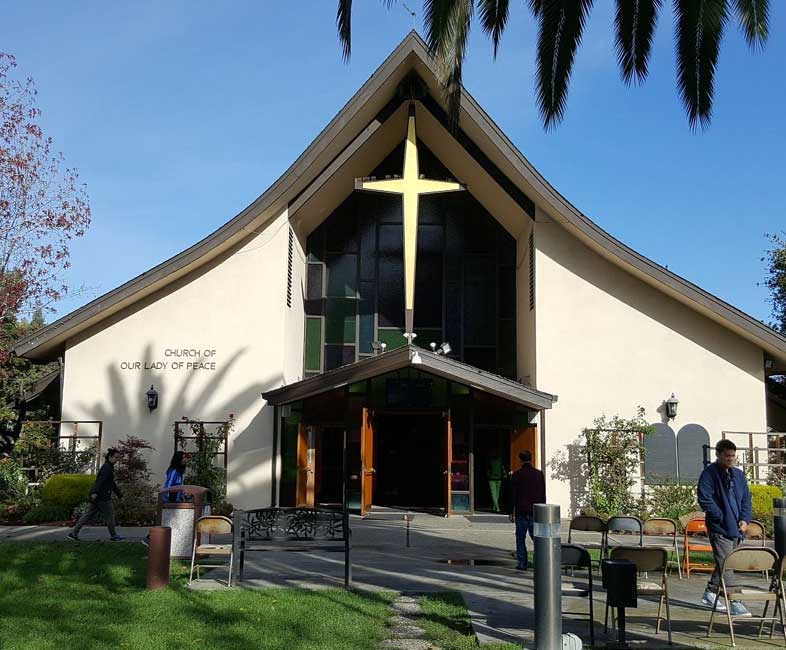 Shrine of Our Lady of Peace also called the Shrine to Immaculate Heart of Mary. The only Marian shrine on the west coast of the United States is located at Our Lady of Peace Church here in Santa Clara, California. It is run under the auspices of The Fathers of the Institute of the Incarnate Word. The most notable features of the parish are the 32-foot statue of Mary, mother of Jesus.

Our Lady of Peace is a Roman Catholic Church and shrine dedicated to the greater Glory of God and the salvation of souls. Silicon Valley is not usually thought of as a destination for religious pilgrimages, but Shrine of Our Lady of Peace stands one of the largest, and in fact one and only Marian shrines on the West Coast.

The Blessed Sacrament at Our Lady of Peace Church has been continuously adored 24 hours a day, seven days a week, 365 days per year since August 1976. Over 300 parishioners are now committed to one or more hours each week.

Msgr. John J. Sweeny, the former pastor of Our Lady of Peace Catholic Church in Santa Clara, commissioned noted sculptor Charles C. Parks to sculpt a giant statue of the Virgin Mary to serve as the centre piece of a Marian shrine on the parish grounds.

After three years of work, Parks finished the 32-foot-tall steel statue of Mary in 1983. In a grand dedication ceremony, the statue and encompassing shrine were dedicated and blessed by Bishop Pierre DuMaine, with a special blessing by Pope John Paul II.

Almost 35 years later, the massive steel statue is still one of the largest depictions of the religious figure in the United States, and the largest on the West Coast (the tallest depiction of the Virgin Mary, Our Lady of the Rockies, is almost three times as tall, but sits atop the Continental Divide in Montana).

History of Our Lady of Peace Shrine, Santa Clara 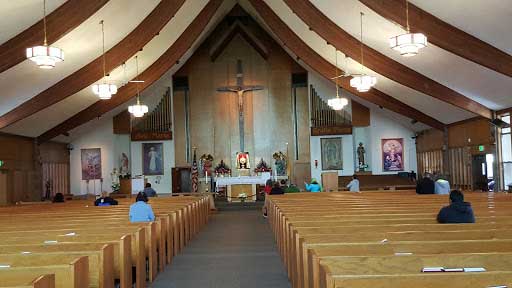 The Shrine of the Immaculate Heart of Mary at Our Lady of Peace is the only major Marian Shrine on the West Coast between Our Lady of Sorrows Shrine in Portland, Oregon, (over 700 miles to the north), and the famous Basilica of Our Lady of Guadalupe in Mexico City, (over 2,300 miles to the south).

Located at the intersection of Freeway 101 and Great America Parkway, the parish of Our Lady of Peace was established in 1961 in a rural community, amidst acres of orchards and fields “out in the boondocks,” as its first Pastor, Father Joseph G.Sullivan oversaw construction of the church, hall, and rectory.

In 1969, the Archbishop McGucken of San Francisco asked Fr. Sullivan to transfer to another parish in need of his leadership, and sent Fr. John Joseph Sweeny to serve as pastor at Our Lady of Peace Church. This was the beginning of Fr. Sweeny’s 32-years stay as pastor of Our Lady of Peace Church. In the late 1960s as proposed city planning developed in the City of Santa Clara, Fr. Sweeny recognized the church’s strategic location as an opportunity for spiritual outreach to the already increasing population.

He also envisioned a shrine to Mary, the Mother of God, as a “forthright expression of faith” for the times. As he explained, “What child hasn’t responded to the open arms of a mother? Even the adult, if we take time to think back a little bit to our first experiences – experiences of trust, the open arms of a mother – I guess there’s nothing more endearing, and it is next to God.”

Drawn to the Shrine by the welcoming statue of Our Lady of the Immaculate Heart, he hoped visitors would then visit the church. In 1976, Fr. Sweeny and a team of supporters established 24 hours Eucharistic adoration. Since then, the church has remained open round-the-clock for prayer.

Establishing the Shrine and creating the statue proved to be more complicated. To support this endeavor, Fr. Sweeny solicited prayers (one million rosaries). Though he never asked for funds, faithful who shared his dream for the shrine began to mail in unsolicited donations.

After years of prayers and searching for a sculptor in 1980 Fr. Sweeny contracted Charles Parks to construct the 32-foot steel Madonna. The statue was completed in 1982, on display in multiple cities for several months, and arrived by flatbed truck at Our Lady of Peace in 1983. On October 7, 1983, the Feast of the Holy Rosary, Bishop Pierre DuMaine of the Diocese of San Jose (established in 1981) dedicated the statue and Shrine to the Immaculate Heart of Mary. Fr. Patrick Peyton of the Rosary Crusade was present for the dedication.

In 1996, a Family Learning Center was built to accommodate the increasing attendance and request for faith-based activities, yet space continues to be a constraint to the present day.

In 2002, Pope John Paul II thanked Fr. Sweeny for his leadership and recognized him as a Prelate of Honor, addressing him as Monsignor Sweeny. Now, the parish is surrounded by Silicon Valley’s corporate giants, Mission College, an ethnic variety of restaurants, Great America Amusement Park, and recently Levi Stadium.

Architecture of the Statue of Our Lady of Peace 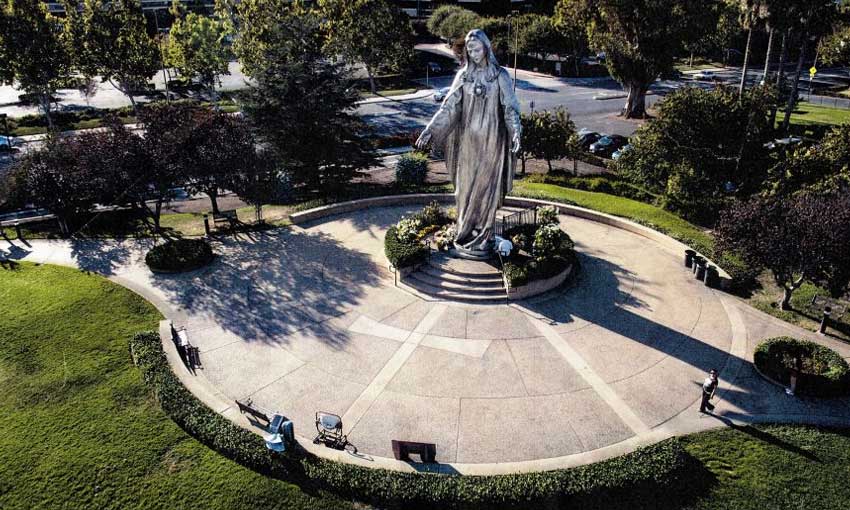 In August of 1980, Msgr. John Sweeny, then pastor of Our Lady of Peace Shrine, Santa Clara, California, fulfilled a long-time desire to give special honor to the Immaculate Heart of Mary. That month, he commissioned Charles C. Parks, a noted sculptor, of Wilmington, Delaware, to design a 32-foot stainless steel statue of Our Lady, under this title. Thus began a remarkable odyssey, of a truly extraordinary image of the Blessed Virgin, the Mother of God. After several models, the masterpiece was begun.

The statue, which some have called “the awesome Madonna,” was finished in the Summer of 1982. It stands higher than most three-story buildings. The 7200-pound statue rises to a height of thirty-two feet and rests on a twelve-foot landscaped mound. The head, hands, and feet are cast in stainless steel. The gown is constructed of welded strips of stainless steel.

It was erected outdoors, on the lawn of the artist’s studio. It created so much interest and attracted so many visitors day and night that the Mayor of Wilmington invited the sculptor to put it on public display in the heart of the city. There it remained from September 1 to October 10, 1982. Many bus loads of pilgrims came from distant cities, to see the statue, and to pray.

During that period, the local paper printed a special supplement titled “The Madonna In Rodney Square”, telling the story of the statue and of the vision of Fatima. The first 10,000 copies sold out in one day. In November 1982, Delaware Today magazine published a special article with full color pictures under the title “The Madonna Phenomenon.”

The statue was blessed and dedicated by Bishop Pierre DuMaine of the Diocese of San Jose, in Santa Clara, California. The ceremony took place on 7th October 1983, Feast of the Most Holy Rosary. Msgr. Sweeny considered the date significant. This date was the 15th anniversary of the beginning of monthly First Friday all-night vigils in this parish.

Pope John Paul II sent a special blessing for the dedication ceremony. During the three days of October 7th to 9th, there were religious and civic ceremonies and public acknowledgements at the foot of the statue. At the final service, on Sunday, October 9th, Father Patrick Peyton of the Family Rosary Crusade, gave the homily. 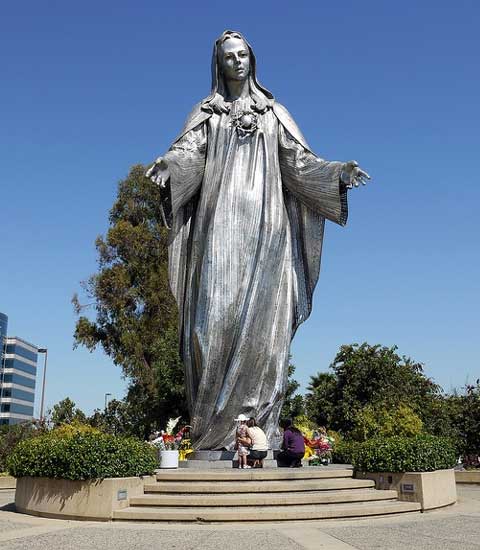 The Annual Feast of Our Lady of Peace is celebrated on 24th January.

Our Lady of Peace Gift Shop started out in 1985 as a table with books and religious items set up in the hall adjoining the sanctuary. In the decades since it has grown into a full service, one-stop shop for hand selected books, statues, art, rosaries, scapulars, sacramental gifts, and a large selection of CDs and DVDs.

Old Ironsides Light Rail Station in Santa Clara, California, United States is the nearby Train Station to the Shrine.