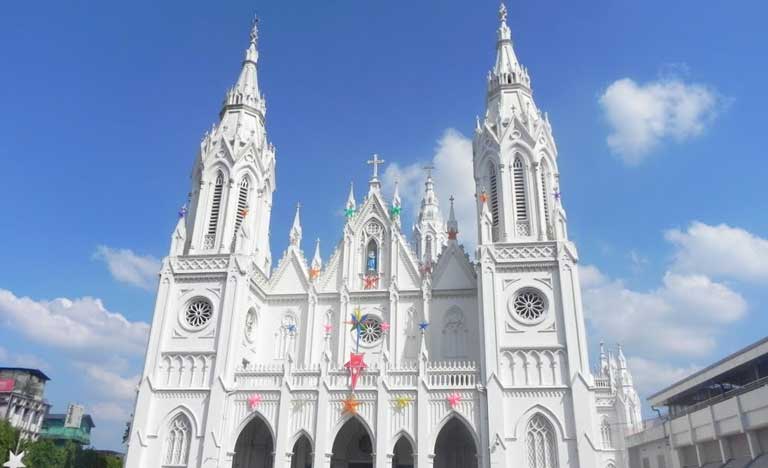 Our Lady of Dolorus Basilica in Thrissur is easily one of the most beautiful of churches in India and will take your breath away from the get go. It happens to be the biggest church in India and the third tallest in Asia owing to having some of the tallest of belfries. The insides of the church have an amazing collection of murals and many colourful statues of saints and several scenes from the Bible, that are depicted with such impeccable detailing. The roof of the church will remind one of the Sistine Chapel as there are a lot of beautiful paintings that have been done directly onto the walls. It, in fact, has one of the largest collection of murals that a Church in India possesses.

By the persistent and never-dying enthusiasm, the Catholic pioneers completed the construction of the Church as the most beautiful and decidedly the biggest church in India and the second biggest in Asia. It was reconstructed as Our Lady of Dolours Syro-Malabar Catholic Basilica in 1929. That time it was named “Mart Mariam Big Church” as called called by the Christian community, who followed Chaldean Catholic bishop Elias Mellus. The construction of this church was done in different phases, in which two towers were made of 146 feet each and the central tower was of 260 feet height. A lot of tourists visit this popular tourist spot to witness its architectural beauty and view its wonderful interior decoration, that are the prime attraction here.

The Church is now called Basilica of Our Lady of Dolours and happens to be one of the 23 Basilicas of the Catholic Church in India. The Basilica is basically a denomination of the Catholic Church as Syro-Malabar and is also the third tallest church in the whole of Asia. The Basilica is a unique blend of Kerala, Dutch, French and as well as Portuguese form of architecture. The Bible tower which is a part of the Basilica is not only the tallest tower in India, but also in the whole of Asia. The construction of this Bible tower took place in the year 2002. There are two bell towers apart from the Bible tower, and these go up to almost 140 feet. It is a Marian Shine and special devotion to Mary on Fridays in this shrine is very popular throughout Kerala.

It was Sakthan Thampuran, the then Maharaja of Cochin, who conceived the idea of a modern town in Thrissur. Those days, Thrissur was inhabited by a small number of Hindu families. In his endeavour to make Thrissur an Urban centre with commercial activities he brought in and rehabilitated 52 Syrian Christian Families from the neighbouring areas of Aranattukara, Ollur and Kottekkad. The number 52 denoting the year St. Thomas, the apostle of Jesus Christ arrived in Kodungallur. That was in the year 1794.

However, there was no church for these people who settled in Thrissur and had to depend on the parent churches for their religious needs. On seeing this difficulty, the Maharajah promptly gave permission to build a Church in the town. Our Lady of Dolour’s Church was blessed in the year 1814 under the erstwhile Cranganore (Kodungallur) Arch Diocese. In 1887, the Vicariates of Trichur and Kottayam came into existence.

Due to some disputes, the Catholics lost possession of this church they constructed in 1814.

This very church was built in 1814, when the Archbishop of Kodungallur approved for a church to be built for the catholics in the city. It was then approved and constructed and subsequently, the Our lady of Dolorous Church was managed by the Kodungallur Archdiocese from 1814 to 1838.

In 1838, however, Pope Gregory XVI is said to have issued a multi praeclara, which caused for the Kodungallur diocese to stop its functioning. It, thereby, passed on the controls of the church to the Bishop of Verapoly who controlled it until 1861.

Subsequently, more trouble was invited in the form of two Persian Catholic bishops namely Rocos and Melus who are said to have created a divide between the Catholics in the city and, thus, were forced to flee from India. Then Pope Leo XIII is said to have appointed Adolph Medleykot as the first Bishop of Thrissur and divided the Syrian Catholics from Verapoly.

Subsequently, the Catholics had to give up their church and Bishop Vazhapilly Mar Francis decided to have a new one constructed.

He visited several churches from infamous catholic oriented cities such as Rome and other such European cities and upon his return, designed the Church of Our Lady of Dolorus.

To compensate for that loss, the Catholics decided to build another church. On 10th Oct 1914, a temporary altar was blessed in the present Church premises. The foundation for the new church was laid in 1929. The construction took eleven years and the new church was consecrated by the then Bishop of Thrissur, Mar Francis Vazhappilly. The responsibility of constructing the church was passed on to a great architect of Jnanaprakasam and it took 11 years for the church to be constructed. The church was finally consecrated on 24th of November in 1940 by Bishop Mar Francis Vazhapilly and came under the jurisdiction of the Lourdes Cathedral Church.It was named ‘ Church of Lady of Dolour’s and was also called ‘Puthen Palli’ or the new church.

Pope John Paul visited this church in 1986 which is regarded as a great historic feat. In 1992, cardinal Anthony Padiyara converted the church into a Basilica making it the Basilica of Our Lady of Dolorus. In 1992 it was elevated to the status of a Minor Basilica following a decree issued by Pope John Paul II.

The church is a must visit for everybody who is on a trip to Thrissur as not only will it fill you up with great religious spirits but the magnificent and colourful interiors will brighten up your day. Every year on the last Sunday of November, a great feast is organised at the church which draws in a very strong crowd, thereby, making it the second largest festival in Thrissur.

St. Thomas, one of the twelve chosen Disciples of Christ and the Apostle of India who sowed the seeds of Christianity in India, set foot at Cranganore (Kodungallur) in 52 AD.

At that time Cranganore (Kodungallur) was a busy center of commerce and an important port. He traveled about various parts of Kerala by water and land, preaching the Gospel and forming Christian communities which began to grow and several of them sprang up in the vicinities of Thrissur Town too. The heart of the town, known for its spiritual and cultural heritage, was a dense forest in those days. It is now called Basilica of Our Lady of Dolours and is one of the 23 basilicas of the Catholic Church In India.

The first Catholic Church, in the name, Our Lady of Dolours, was founded in the year 1814. The ‘New Church’, now popularly known as ‘Puthenpally’, was blessed on 10th October 1925 by Bishop Mar Francis Vazhappilly.

Lady of Dolours Basilica, known as Puthen Pally, has the distinction of being the biggest church in India with a tower, said to be third tallest in Asia.  It has an area of 25,000 sq. ft., and is 261 ft. tall.  It is adjacent to the Martha Marian church.
Construction of the church in the Gothic style, that began in1929, was completed after 11 years. As many as 30,000 people can be accommodated in the church at a time.  Other than the main altar, the church has five small altars. The Bible Tower with murals that depict various phases of Christ’s life is a unique feature.  The bell tower has eight bells imported from Germany.  The Feast of St. Mary, which falls in September, is the main event of the year. This is the most famous Marian pilgrim centre in Thrissur.

Our Lady of Dolours Syro is the third tallest church in Asia, famous for its extremly attrcative Gothic style architecture and fine Indo-Gothic interiors. Located in the center of Thrissur City, in Kerala, this popular attraction was built in an area of 25,000 square feet in the year 1814 with exuberant interior decorations. People from different parts of the country and even abroad, visit this amazing church to see the fine specimens of murals, images of saints, and scenes from the scriptures, protected inside the church.

Our Lady of Dolours Basilica, also called Puthanpalli, is a Catholic Church belonging to the Syro Malabar Rite. Constructed in the Gothic style, it is the biggest Church in India. It has two bell towers with a height of 146 feet and also a Bible tower which is 260 feet.

Behind the church lies a tall church tower known as the Bible Tower and happens to be the tallest of such towers in the whole of Asia. Standing tall at a height of 262 feet, this tower is covered in stained glass that contain some of the most beautiful paintings in the world, depicting various scenes from the Bible. It depicts the entire lifetime of Jesus Christ starting from his birth and leading up to the passion of the Christ and his resurrection. Basilica of our Lady of Dolours is believed to be the biggest and tallest Church in Asia.

This church is dedicated to Mother Mary. Eight music bells imported from Germany are special attractions of this church. The chapel has 15 altars. The church is famous for its Gothic style of architecture.

Interesting Facts About Our Lady of Dolours

The church celebrates two festivals. Basilica Feast – last Sunday of November & Feast of Our Lady of Dolours (Annual Oottu Thirunal) – 15th September. Begins with Holy Mass at 10.30 am followed by oottu till 6. pm.

The church locally called Puthanpalli and is the tallest church in India and third tallest church in Asia. A big tower located at its rear called bible tower having many paintings and an nice Bible Museum and an Art Gallery.

Our Lady Of Dolours Basilica, Thrissur, Kerala is well connected with Bus Station, Railway Station and Airport facilities rest of the country. The Basilica is situated in the heart of Thrissur city.

Kochi International Marina Airport, Kerala which is (77.3 Kms) from Our Lady Of Dolours Basilica, Thrissur, Kerala.

The nearest railway station is Thrissur Railway Station which is just 2 Kms from Our Lady Of Dolours Basilica, Thrissur, Kerala.

The nearest is Thrissur Bus Station which is just 2 Kms from Our Lady Of Dolours Basilica, Thrissur, Kerala.