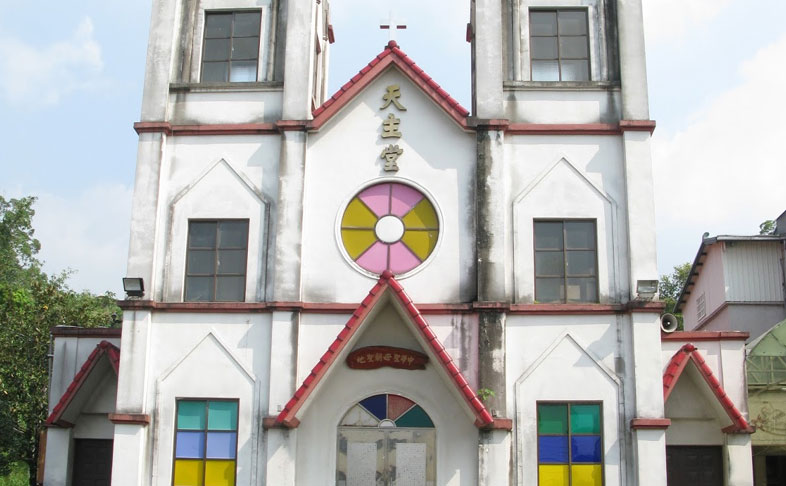 Our Lady of China, Meishan County 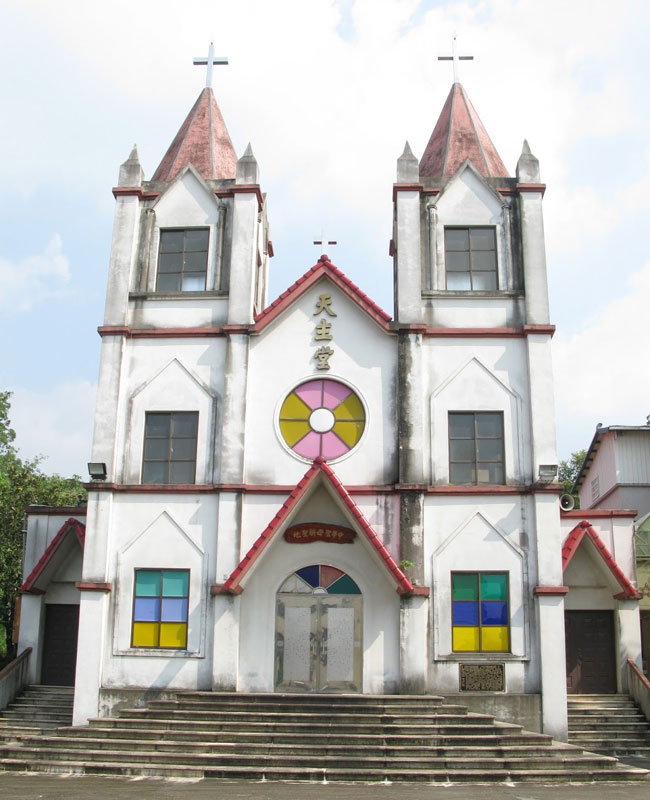 Meishan Our Lady of China Catholic Church is a Catholic church located in Meishan Township, Chiayi County, Taiwan belonging to the Catholic Diocese of Chiayi. It is also a national pilgrimage site of Our Lady of China. The current priest of the church is Father Jiang Bin. The church was originally built in 1957. In 1989, due to the increase in the number of pilgrims, a larger church was built on the original site. It was completed in 1991.

Around 1913, Spain went to the famous church to preach in Meishan. In 1931, the number of believers increased, and they rented land to build a church hall on Meishan Street. In 1953, when the Catholic Jiayun Diocese was just established, only priests came to preach mass, so there was no need to travel far away church to participate in Mass.

The majestic church today was rebuilt in 1989 when Bishop Lin Tian helped, and it was inaugurated on May 26, 1991, Meishan The Church of Our Lady of China is the pilgrimage site of Our Lady of the Diocese of Chiayi. It is a good place for pilgrimage, spiritual practice and tourism.

Meishan Township itself is a famous scenic spot in Chiayi County.

There are also Huashan Scenic Area, Ruili Scenic Area and Taiping Scenic Area near the church. “I’m sorry for the typo when the church was built. The current revision is based on the special issue of the 50th anniversary of the Diocese.”

History of Our Lady of China, Meishan County 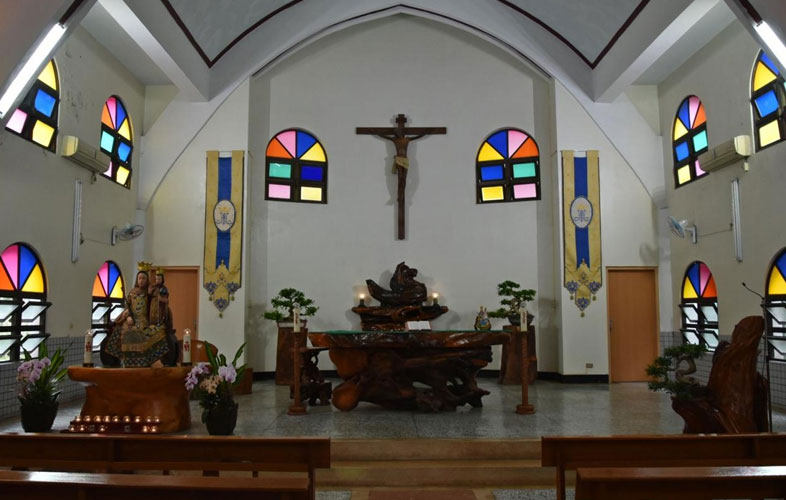 Our Lady of China, Meishan County – The history of Catholicism in Meishan can be traced back to the Spanish Dominicans who came to Meishan to preach in about 1913, and then established the Taoist Hall as a mission center in 1931. In 1953, when the Catholic Chiayi Prison and Pastoral District was established, Meishan officially established the Holy Order. In 1954, Father Sun Jishan served as the first priest of Meishan Parish. In April 1954, the Chinese Missionary Sisters Association moved to Meishan Township to establish the Association.

In 1957, Cardinal Tian Gengxin came to Meishan to inspect the academic affairs and donated money to build the first Catholic church in the area – “Our Lady of China Church”. In 1972, the convent of the Sisters of Our Lady of China was moved to Chiayi City. In the same year, the Meishan Catholic Church was designated as a pilgrimage site by Bishop Jia Yanwen, who was then Bishop of Chiayi Diocese.

In 1989, in order to accommodate the increased pilgrimage population, with the preparation of Bishop Di Gang, who was then serving in the Diocese of Chiayi, a new church large enough to accommodate more people was built on the original site, and it was completed on May 26, 1991. In 2020, Bishop Zhong Anzhu (currently Archbishop of Taipei), who was then the Diocese of Chiayi, applied to the Pope for the coronation of the wooden statue of Our Lady of China.

Pope Francis issued the Pope’s approval on February 19, 2021 through the Ministry of Liturgical and Sacraments On March 2 this year, the Diocese of Chiayi officially received an order of approval, and the Apostolic See has approved the coronation of the statue of the Virgin of China at the Meishan pilgrimage site in Chiayi County. During the coronation ceremony, the Pope conferred a crown or a halo of stars on the image of the Virgin Mary, which is a unique title for a particular diocese. Coronation.

Architecture of Our Lady of China, Meishan County, Taiwan 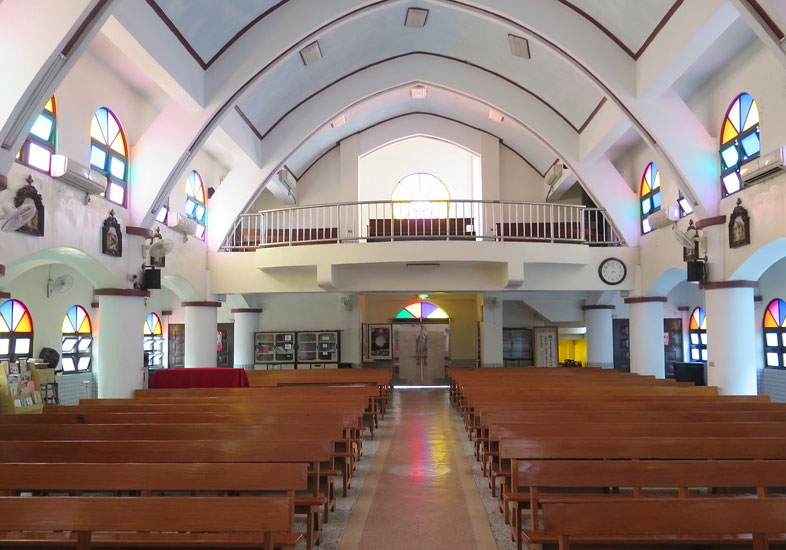 Our Lady of China, Meishan County the building itself is a Gothic-style building. A wooden plaque engraved with “China’s Patron of Pilgrimage” hangs at the entrance of the church. In addition to the church itself, there are also ancillary equipment such as a baptismal pool. The inner sanctuary is carved from a solid wood, which complements the altar of the same wood.

On the left is a statue of the Madonna of China in the official uniform of the Qing Dynasty, which was brought from mainland China by the Sisters of Our Lady of China when they came to Taiwan. On the right is the statue of St. Joseph. On the right side of the church, there is a statue of the Virgin of All Souls created by Taiwanese sculptor Mr. Yang Yingfeng. On the hill behind the church, there is a theme layout of the Fourteen Crusades of Jesus, and it is named “Mountain Garden” after the Holy Scriptures.

Our Lady of China 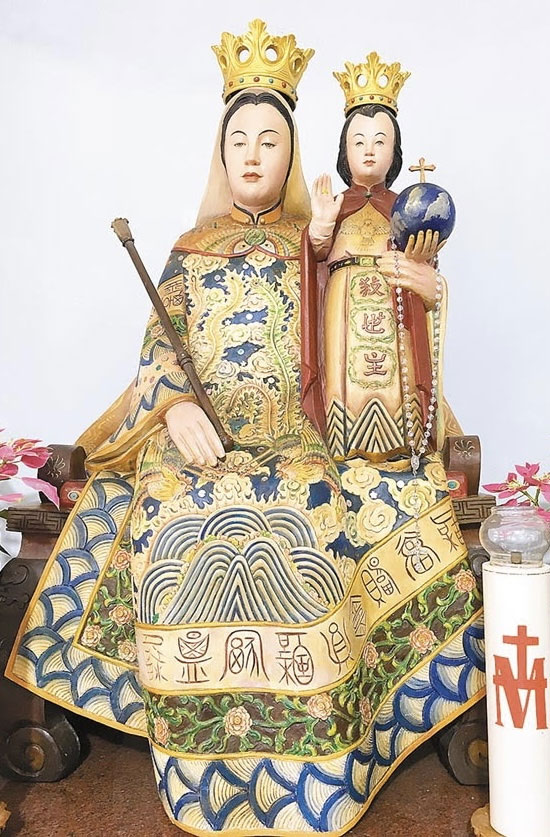 Our Lady of China is a title for the Virgin Mary in China who is believed to have appear at the small village of Donglu in 1900. In Chinese she is called Zhōnghuá Shèngmǔ (simplified Chinese: 中华圣母; traditional Chinese: 中華聖母). She is also known as Our Lady of Donglu.

Our Lady of China, the Great Mother is a Roman Catholic title of the Blessed Virgin Mary associated with an alleged Marian apparition in Donglu, China in 1900.

In 19 February 2021, Pope Francis granted a decree of Canonical Coronation for a Marian image decreed as Madonna and Child, presently venerated at the National Shrine of Our Lady of China in Chiayi, Taiwan. The expected date of coronation is yet to be announced.

History of Our Lady of China 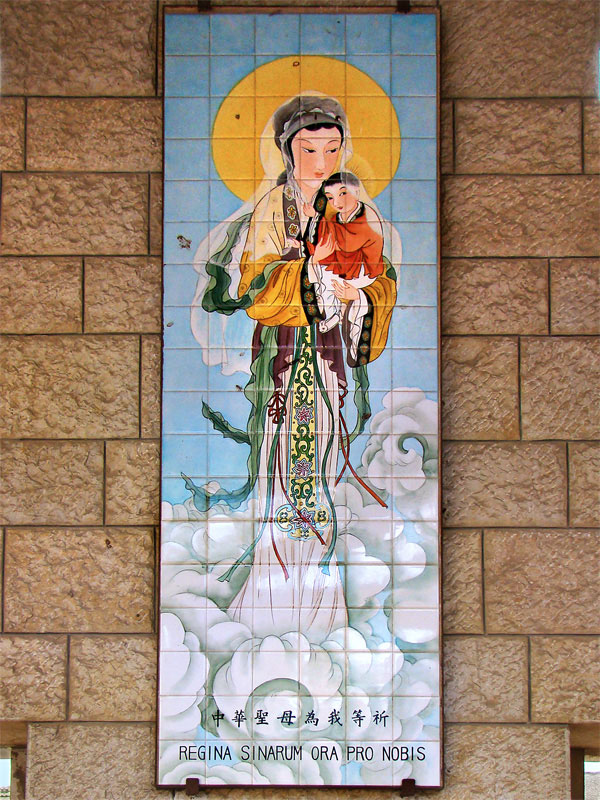 The angel flew down surrounded by blazing flames of fire down from the sky and into the crowd of soldiers. By himself, Michael drove all of the soldiers out of the village. Villagers learned afterwards that their local priest, Father Wu, prayed to the Virgin Mary for help from the soldiers attacking. The residents of Donglu then built a church for the Virgin Mary to express their gratitude for the help they received. The Church was then destroyed during World War II after it was hit by Japanese bombs.

During the Boxer Rebellion, a great number of soldiers attacked the village of Donglu, Hebei. The village consisted of a small community of Christians founded by the Vincentian Order of priests. Pious legends claim that the Blessed Virgin Mary appeared in white, and a fiery horseman (believed to be Saint Michael the Archangel) who chased away the soldiers.

The local priest, Father Rene Flament of the Congregation of the Mission hired a local French painter in Shanghai to make a Marian statue with similar to the Chinese dowager Empress Ci Xi. This image was based in the Marian image of “Our Lady of Laeken” venerated in the Church of Our Lady of Laeken in Brussels, Belgium. The Donglu statue was later destroyed in 1966 during the Cultural Revolution.

Accordingly, Donglu became a place of pilgrimage in 1924. The image was blessed and promulgated by Pope Pius XI in 1928.[1] At the close of the 1924 Shanghai Synod of Bishops in China, the first national conference of bishops in the country, Archbishop Celso Costantini (剛恆毅), Apostolic Delegate in China, along with all the bishops of China, consecrated the Chinese people to the Blessed Virgin Mary. In 1941, Pope Pius XII designated the feast day as an official feast of the Catholic liturgical calendar.

In 1973, the Chinese Bishops conference, upon approval from the Holy See, placed the feast day on the vigil (day preceding) of Mother’s Day (the second Sunday of May).

In 1989, a painted canvas of the same Madonna with Child Jesus dressed in golden imperial robes was recreated, now enshrined at the altar of the parish. In 1976, another statue was reconstructed in Taiwan now venerated in the “National Shrine of Our Lady of China”, which was constructed in 1913.

In 2020, the Archbishop of Taipei, Thomas Chung Anzu requested a coronation for the Marian image, which was granted and merited a decree of Pontifical coronation from Pope Francis in 19 February 2021. The decree was released to the Taiwanese media on 2 March 2021. 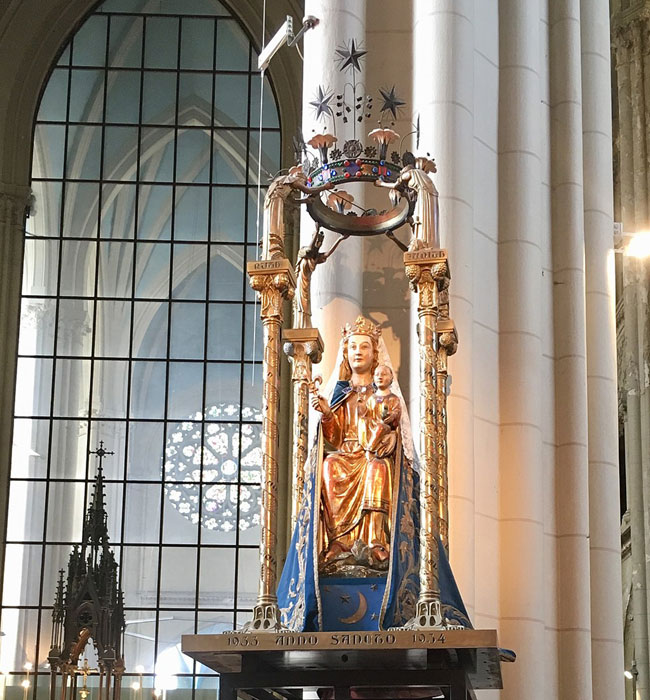 The Catholic Church built a shrine in 1992 to commemorate the 1900 apparition events and organized a large celebratory worship service nearby in an open field on May 23, 1995, which about 30,000 people attended. During the opening prayer, those present saw the sun moved from to right to left in the sky and shone down light of rays with different colors. Then the Virgin Mary holding the infant Jesus, appeared in the sky.

Mary did not speak but witnesses (Chinese Christians whose faith was oppressed by the government) reported feeling comforted and encouraged by her appearance. The overwhelming public interest of visiting the shrine after the apparition took place upset the Chinese government. The Chinese government then banned people from going to the shrine but still many pilgrims came. Proving it was unsuccessful, the Chinese army destroyed the Donglu shrine. (But many shrines dedicated to Our Lady of China are still in China and other countries.)

Meishan Township (梅山) Evangelical Society chairman Kuo Ming-che (郭明哲) said the statue of Mary holding a young Jesus is modeled on an apparition said to have been witnessed in Qingyuan County in China’s Hebei Province in 1900.

There is rumored to be a similar statue at the Basilica di Santa Maria Maggiore in Rome, Kuo said, adding that this shows the spirit of Catholic followers, who adopt local customs wherever they go.

Church documents record that the statue in China was commissioned by Catholics in Qingyuan who, after witnessing an apparition, wanted to thank Mary for giving them spiritual strength during the Boxer Rebellion. The documents say the Cixi-style clothing was used to give the statue Chinese characteristics. A French artist was commissioned to paint its clothing, the documents say, adding that a fan held in the statue’s right hand was replaced with a staff.

The statue’s face was painted white, like in traditional images of Mary. In the styling of the Chinese palace of the time, Mary and Jesus were given jeweled crowns. The Jesus figure was adorned with a belt and Chinese-style slippers. Chao Shih-i (趙士儀), head priest of the local diocese, said that after establishing communications with a parish in China’s Shandong Province in the 1980s, members of the Sisters of Our Lady of China arranged to create a replica of the Qingyuan statue.

The Meishan statue was placed within the National Shrine of Our Lady of China beside the Meishan church when the shrine was rebuilt in 1989. Kuo said the church has become a pilgrimage destination for worshipers to pay respects to Our Lady of China. The shrine and statue are open to the public all day, Kuo said. Kuo said he hopes visitors will remain quiet while visiting to maintain the sanctity of the shrine. A path behind the church leads to an image of Christ on the cross, which is also open to visitors, he said.

A mountain-water spring was also previously accessible, but was closed last year after litter problems arose. Lee Hsu-yan (李旭彥), chief executive of the Meishan Culture and Education Foundation, said the church is one of four main places of worship in the township along with the Yu Hsu-kung Temple (玉虛宮), the Chan Lin-ssu Temple (禪林寺) and the Chang Lao Presbyterian Church. 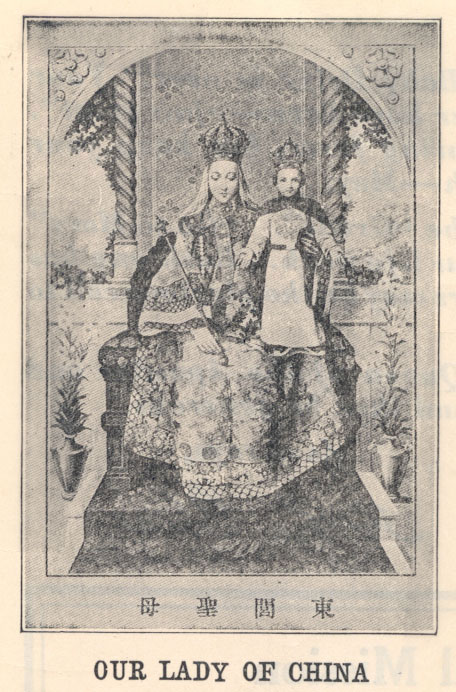 A mosaic rendition of Our Lady of China exists within the Basilica of the National Shrine of the Immaculate Conception in Washington D.C. established in 2002.

Controversy arose due to the Marian iconography not being officially sanctioned by the Holy Office for religious propagation. Adding more political issues, a Chinese Cardinal Thomas Tien Keng-Hsin sanctioned this variant image for a religious prayer card for the persecuted in China, and was widely promoted in America and Canada. 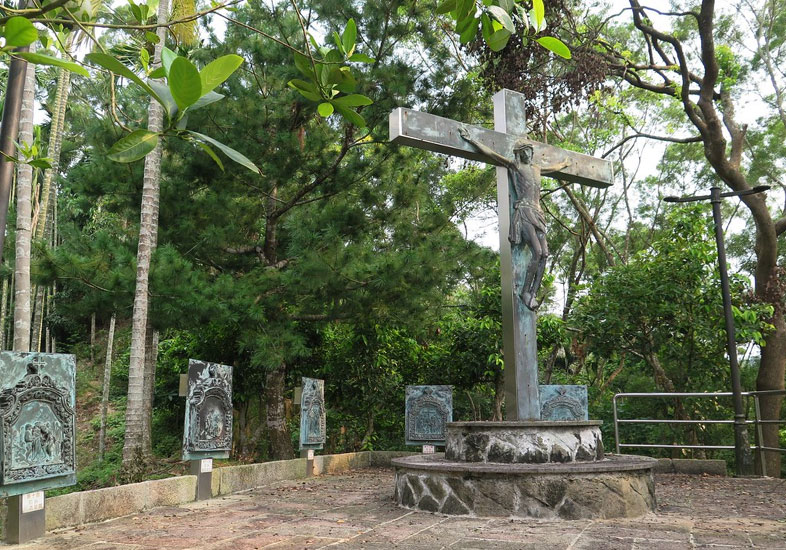 Feast Day – 2nd Sunday of May

Annual Feast Day of Our Lady of China (The Great Mother of China) held on Second Sunday of May.

Chiayi Airport, commonly known as Shueishang Airport in Shuishang Township, Chiayi County, Taiwan is the nearby airport to the Shrine.