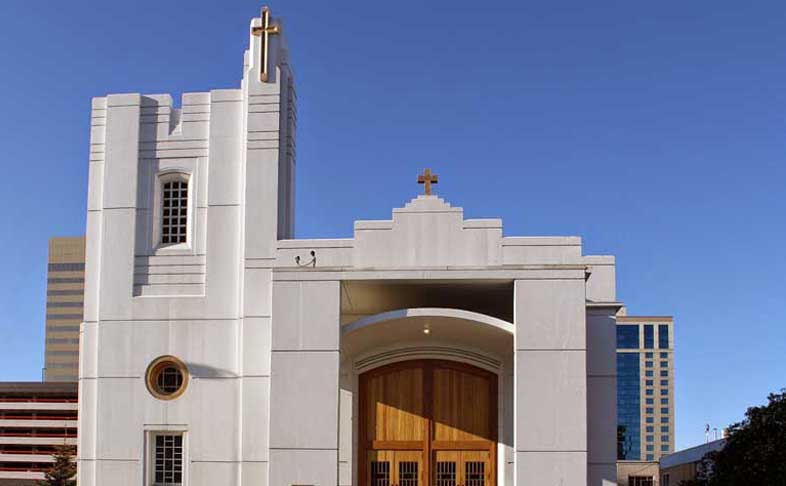 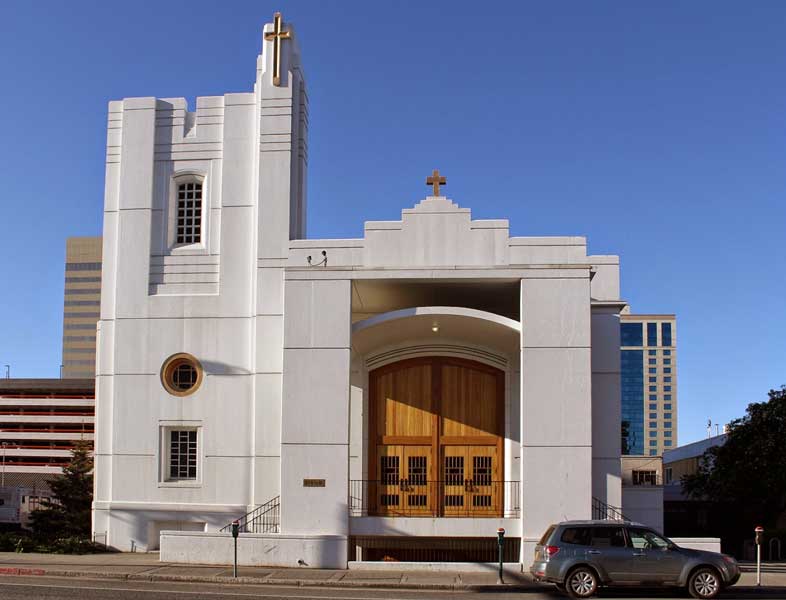 The original parish was established in 1915 when Anchorage was founded. The first building was made from cement blocks with a wood frame. It was the first church built in the city.

Construction on the new church began in 1946 after years of fundraising. It was designed by architect Augustine A. Porreca in the Romanesque Revival architectural style. Though services began in this church in 1947, it wasn’t completed until 1952.

Pope John Paul II held a papal audience in the Cathedral during his visit to Anchorage in 1981. The event attracted a crowd estimated at about 80,000 people.

The church was given the moniker of Old Cathedral in 2020 after the Archdiocese moved to Our Lady of Guadalupe Church. This move came because the size of the church could no longer hold the ever-growing congregation.

At the Holy Family you will encounter visitors from around the world, especially during the summer tourist season. Our Bavarian stained glass windows, 125 years old and transplanted from a parish in Philadelphia, are a jewel of downtown Anchorage art. Here is a gift shop and book store, St. Paul’s Corner, is located at the corner of 5th Avenue and 1st Street. It includes “made in Alaska” rosaries and note cards, books and many beautiful religious items. 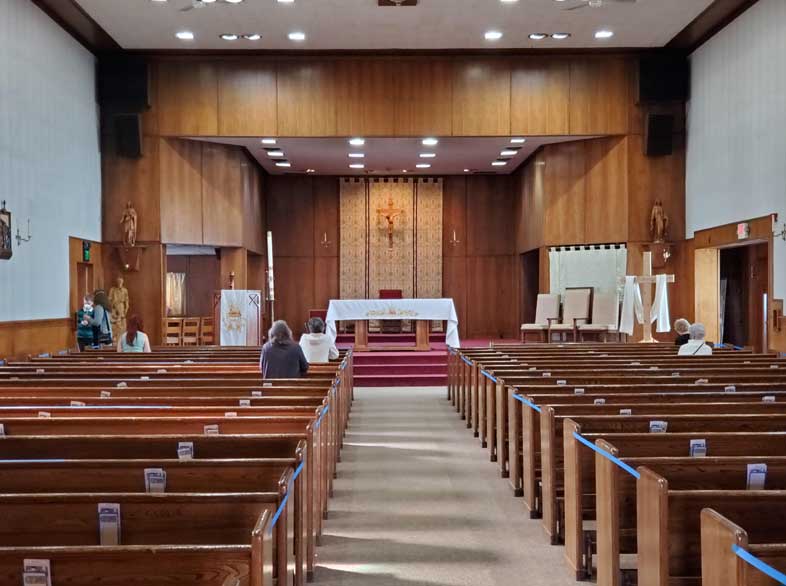 Holy Family Old Cathedral, Alaska parish was established the same year as the city of Anchorage. In 1915 the Rev. John Vander Pol, S.J. was sent to Alaska to investigate the need for a parish in the new settlement. A.J. Wendler acquired two lots for the new parish in an auction for $175. Father Vander Pol designed a simple wood-frame building with a veneer of ornamental cement block that measured 24 feet (7 meters) by 48 feet (15 meters) feet. It was built for $1,400. Construction of the new church was begun in September 1915 and completed on December 15 of the same year. It was the first church building constructed in Anchorage.

The congregation quickly outgrew their new church and plans were made early on to replace it. Funding a new structure proved difficult, however, and it was several decades before they could afford to build a larger church building. It was during the pastorate of the Rev. Robert O’Flanagan, S.J. that the present church was built. Seattle architect Augustine A. Porreca was chosen to design the new church. Work began on the Romanesque Revival structure in 1946. The first mass was celebrated in the unfinished basement on December 14, 1947. The parish was able to use the main church by the end of the following year. Father O’Flanagan became Bishop of Juneau in 1951. The church’s interior was completed the following year.

On Good Friday of 1964, an earthquake with a magnitude of 9.2 devastated much of South Central Alaska. The Pope’s apostolic delegate came to view the damage, and upon doing so they saw that Anchorage would be the focal point of both state and spiritual growth. In 1966, the Holy See created the Archdiocese of Anchorage, and made Alaska a separate province. Archbishop Joseph T. Ryan was installed as the first Archbishop of Anchorage on April 14, 1966. Holy Family church became a cathedral with the establishment of the new archdiocese.

The original main entrance into the cathedral was along the side of the building through the tower. The architectural firm of McEntire and Pendergast designed a new portico of the main facade. It features two pairs of doors with oversized transoms that replaced a large window. The exterior had been a natural gray color from the time of its construction. In 1970 it was painted off-white. Archbishop Ryan invited the Order of Preachers (Dominicans) to staff the cathedral in 1974.

The Cathedral was the host church for the 1981 visit of Pope John Paul II to Anchorage, which attracted a crowd estimated at about 80,000 people. The Pope held a papal audience in the Cathedral, and a similar audience for the handicapped in the basement during his visit.

Because of growth in the archdiocese and the limitations of its downtown location, it was decided that Holy Family was no longer a practical location for many liturgical functions of the archdiocese. Archbishop Roger Schwietz, OMI petitioned the Holy See in 2013 to have Our Lady of Guadalupe Church named a co-cathedral and Holy Family maintained as the historic cathedral. In October 2014, the petition was approved and Our Lady of Guadalupe was elevated to co-cathedral status on December 14 of that year.

In 2020, Pope Francis united the Archdiocese of Anchorage and the Diocese of Juneau and erected the new Archdiocese of Anchorage-Juneau with their combined territory. The Papal bull, which established the new archdiocese, designated Our Lady of Guadalupe as its cathedral and the Nativity of the Blessed Virgin Mary in Juneau as its co-cathedral. Holy Family ceased being the cathedral at that time and was given the title “Old Cathedral.” 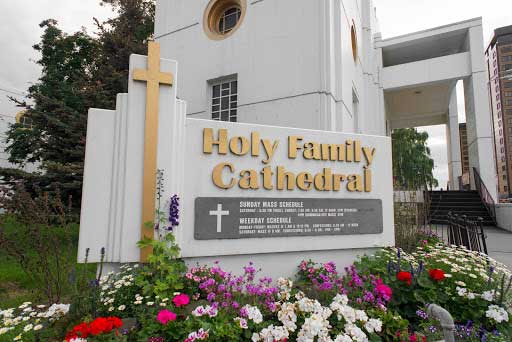 Patronal Annual Feast day of the Holy Family usually will be held on the first Sunday after Christmas.

Ted Stevens Anchorage International Airport at Alaska, United States is the nearby Airport to the Cathedral.