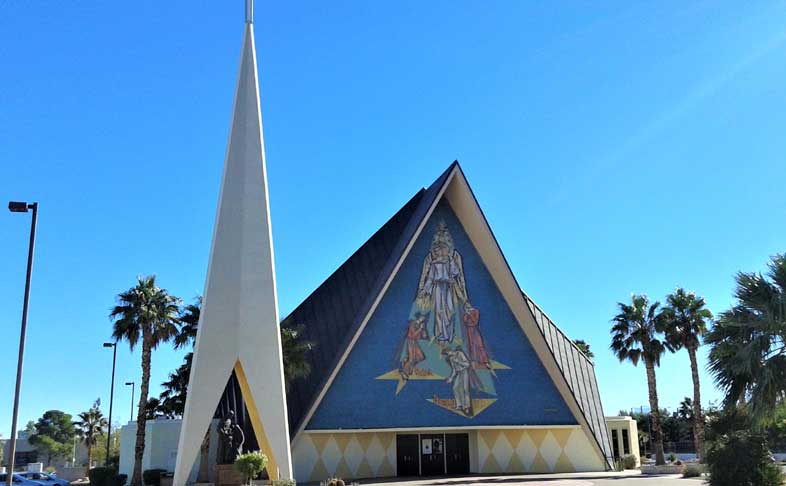 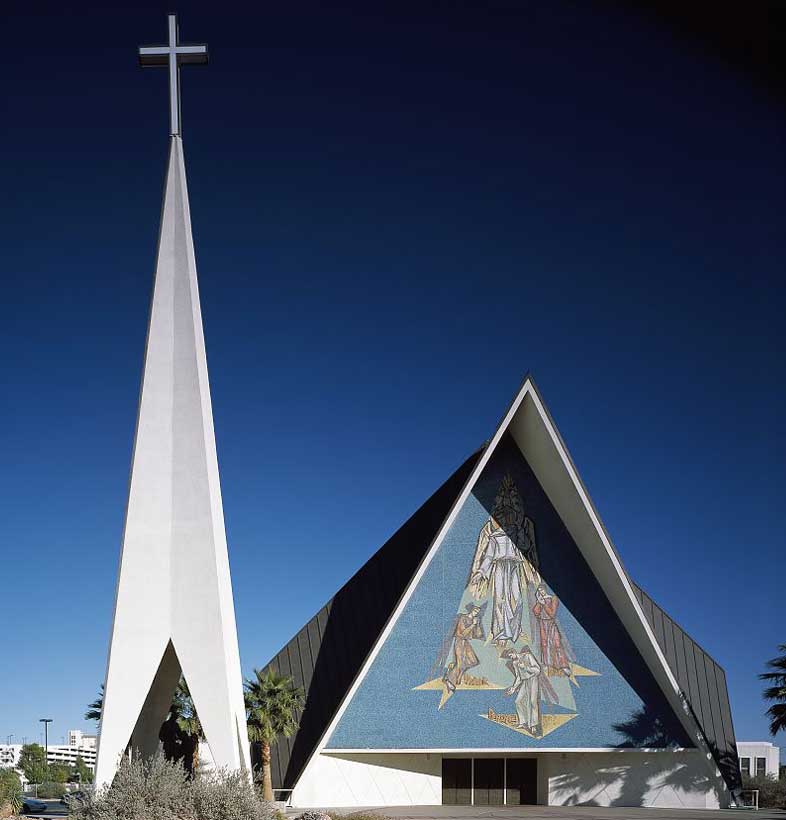 Guardian Angel Cathedral, Las Vegas has been serving the nearly 750,000 Catholics of Las Vegas and millions of visitors for nearly 60 years.

In the history of 20th century Nevada, Morris Barney Dalitz is often called “Mr. Las Vegas” for his efforts to shape the city into a modern metropolis. A Detroit transplant, Moe was a legendary bootlegger, racketeer and early investor in the Las Vegas gaming industry. After it was revealed in a 1950s Senate hearing that Dalitz was a top man in various crime syndicates, he decided to improve his public image and became an active philanthropist.

Using his own money along with union pension funds, he underwrote the construction of the Sunrise Hospital, Las Vegas Country Club and made large donations to the Las Vegas Public Library System. He kept a California public relations firm on his payroll to inform the Las Vegas community of his on-going efforts to help his adopted city. (Nevada Journal online, 1996) In 1961 he donated land and funds to build the Paul R. Williams’ designed Guardian Angel Shrine for the Catholic Diocese of Reno-Las Vegas. 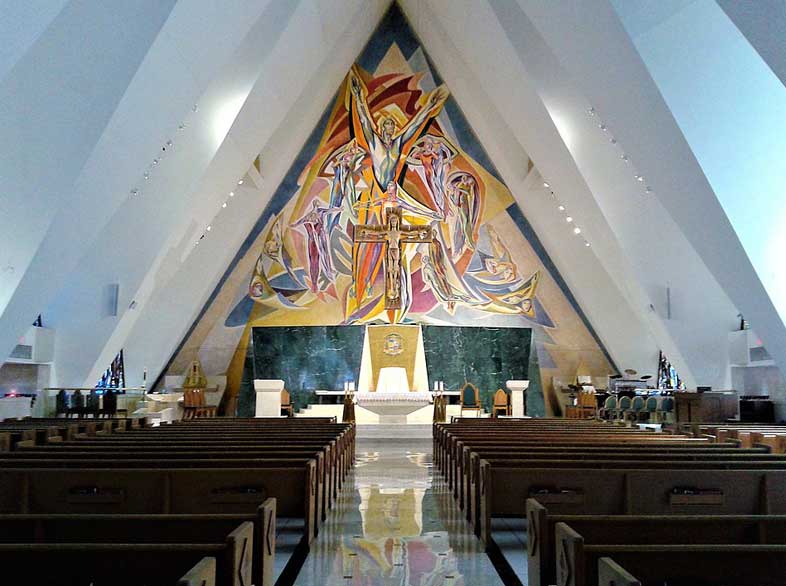 Dalitz and Williams’ Las Vegas relationship may date to the merger in the late 50s of the Royal Nevada with its neighbor on the Strip the Stardust Hotel. The Williams’ and John Replogie designed Royal Nevada, built in 1955, was one of the last low profile hotels. The Stardust was one of the largest with 1000+ rooms, the largest pool and the largest casino in Nevada. The smaller complex was ultimately consumed by the giant “star and planet” themed hotel.

Familar with the Williams’ work on the Royal Nevada, Dalitz approached the architect with his plan to help the Catholic Diocese and replace their recently razed home church—St. Viator. When St. Viator was built in 1955 on the site of the former the city dump, the land proved to be unstable. Within 6 months of completion St. Viator was condemned and torn down. Churchless, Reverend Richard Crowley, approached Dalitz to donate land on the Strip.

The idea of a conveniently located Catholic church for his casino workers appealed to the Jewish Dalitz. In 1961 he donated land near the Desert Inn and by October 1963 Guardian Angel Shrine held its first mass. Acknowledging the building’s importance to the community, Bishop Norman McFarland designated the Guardian Angel Shrine and a newly constructed St. Viator co-cathedrals for the Diocese of Reno-Las Vegas in 1977. 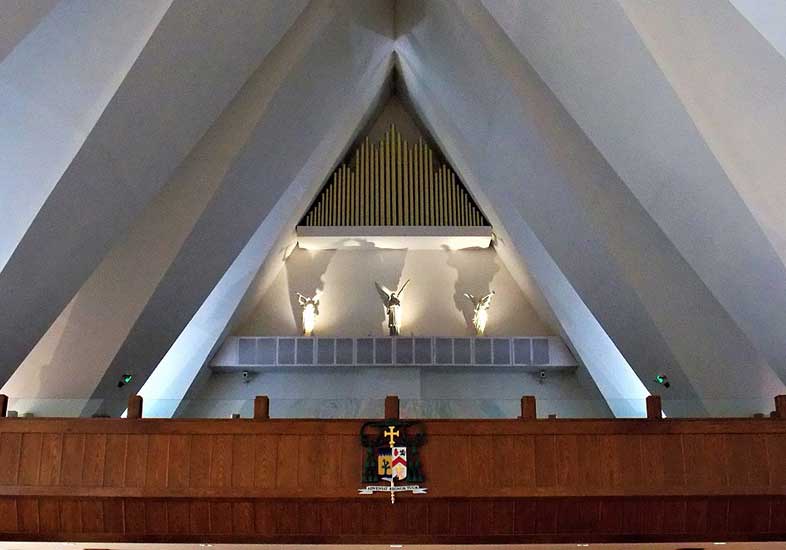 Guardian Angel Cathedral, Las Vegas – It all began more than fifty years ago. His name was Joe Bock. He was the Food and Beverage Manager at the Stardust and Desert Inn hotels. At this time, Fr. Richard Crowley, CSV was pastor of St. Viator Roman Catholic Church at the corner of Eastern and Flamingo.

Joe approached Fr. Crowley asking if he would be willing to offer a 4:30 AM Mass for Catholic cooks, bartenders, waiters, musicians, and others in the associated hospitality industry working in Strip hotels to fulfill their Sunday obligation before going home after the last shift. The first such Mass was celebrated in the showroom of the Royal Hotel and Casino in 1958.

As time marched on, the showroom setting presented more and more difficulties. Many expressed a desire to establish a Catholic chapel on the Strip. Casino executive envisioned how this could benefit both the workers and the tourists and several agreed to assist in building such a chapel.

In 1961, Fr. Patrick Toomey, CSV was named pastor of St. Viator Roman Catholic Church. His task was three-fold: Build a church and a school for St. Viator’s parish and a chapel on the Strip for casino workers and tourists. With the help of several community leaders, the donation of the land on the Strip for the chapel and financial support from hotel owners, St. Viator’s Guardian Angel Shrine became a reality on October 2, 1963.

In 1970, Fr. Francis White, CSV became pastor of St. Viator Roman Catholic Church and Guardian Angel Shrine. During his pastorate, the cathedral artwork was completed under the direction of the Piczek sisters from Hungary. Their artistic accomplishments are demonstrated in the stained glass, mosaics, and the sanctuary mural of our Cathedral.

All this time, the entire State of Nevada was one diocese: The Diocese of Reno. 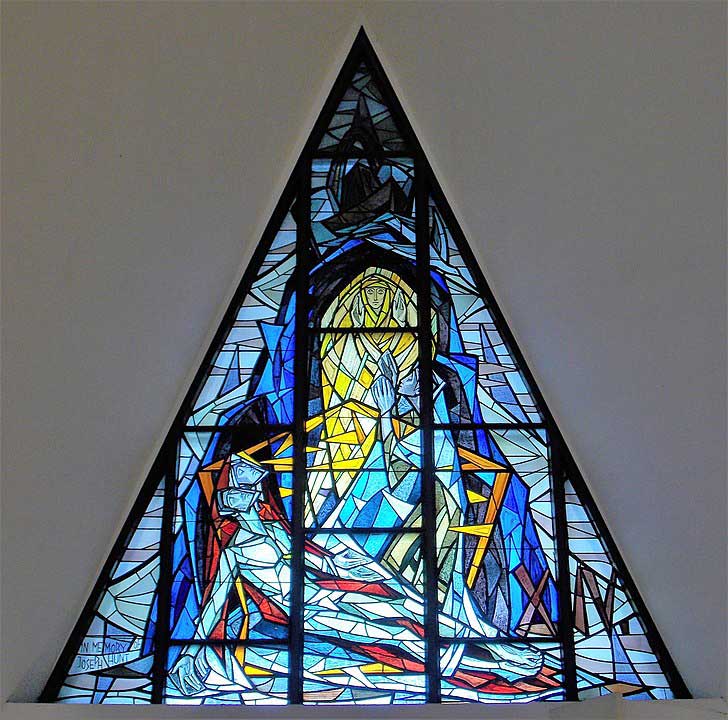 In 1977, His Excellency, Norman Francis McFarland, Bishop of Reno-Las Vegas designated the St. Viator Guardian Angel Shrine as the co-cathedral for the southern portion of the Diocese. Priests assigned to St. Viator Roman Catholic Church continued to provide pastoral and administrative services as both sites.

In 1979, Fr. Edward Anderson, CSV was appointed the Pastor of Guardian Angel Co-Cathedral and St. Viator Roman Catholic Parish. In the following year, 1980, Bishop McFarland designated the co-cathedral as its own parish. It was then that Fr. Eugene Mierzwinski, CSV became the first Rector of Guardian Angel Cathedral. The Cathedral was to be primarily a parish for tourists – their home-away-from-home.

In 1984, Fr. Edward Anderson, CSV was appointed its second Rector. Three years later, in 1987, Bishop Walsh became Bishop of Reno-Las Vegas. In consultation with Fr. Anderson, because of the large numbers of tourists attending Masses at the Cathedral, Bishop Walsh authorized another church at the south end of the Strip: the Shrine of the Most Holy Redeemer.

In 1990, Fr. Patrick Cahill, CSV became the third Rector of Guardian Angel Cathedral. During his term, the Bali Hai Motel behind the Cathedral was demolished and a new chancery and cathedral office complex was constructed: The Catholic Center of the Diocese of Las Vegas. It was also at this time that Bishop Walsh requested permission from Rome to offer at 2:30 PM Saturday Mass of Anticipation for tourists in an attempt to reduce the crowded condition at the other service. The special indult was granted, and it still exists today.

In 1995, the Diocese of Reno-Las Vegas was divided and the Diocese of Las Vegas became its own entity with Bishop Walsh as the first Bishop of the new diocese. With its new status, the Cathedral building and grounds were renovated as you see them today. The angels in the sanctuary and balcony, and the hanging Crucifix, are later additions.

In 1996, Fr. James Crilly, CSV was appointed to the Cathedral as its fourth Rector. He served until 2003 when Fr. Larry Lentz, CSV was named the fifth rector of Guardian Angel Cathedral.

In 2000, Bishop Walsh was appointed to the Diocese of Santa Rosa in California, and in 2001, Joseph Pepe was consecrated Bishop and installed as the second Bishop of the Roman Catholic Diocese of Las Vegas. He served in this role until 2018.

In May 2011, the administration of Guardian Angel Cathedral was transferred from the Viatorians to the Diocese.

The Cathedral continues to be a beacon of the Catholic faith. 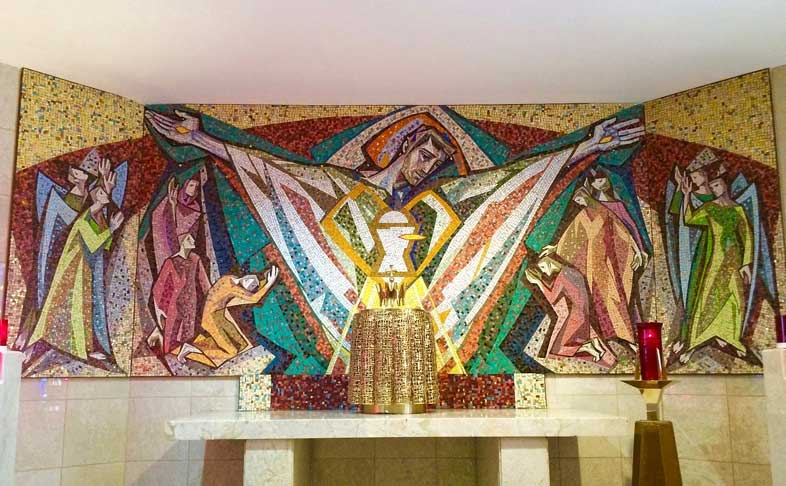 Architect Paul R. Williams used an A-frame design for the church structure. A four-sided spire capped with a cross is located to the front left of the cathedral. At its base is a statue of the Holy Family. There is a large mosaic over the main entrance of the cathedral by Los Angeles artist Edith Piczek. It represents the Guardian Angel with three figures: Penance, Prayer and Peace. She also created the mural on the rear chancel wall, which is titled The Final Beginning.

The stained glass windows, which depict the Stations of the Cross, are by her sister Isabel Piczek. They are located in 12 triangular niches that bisect the A-frame. A large crucifix is suspended from the ceiling above the altar and in front of the chancel mural. There is seating for 1,100 people in the cathedral. The pews on the main floor are divided into four sections across the nave, and a deep gallery above the main entrance. The Blessed Sacrament is housed in a chapel to the right of the altar, and the Lady chapel is located on the opposite side of the cathedral.

Paul R. Williams’ use of the dramatic A-frame design was the perfect choice for the building’s Strip location. With seating for 1100 congregants, the building easily holds its own against the glitz, glamour and neon of the surrounding hotels and casinos. A large, colorful mosaic over the entrance by Los Angeles artist Edith Piczek represents the Guardian Angel with three figures: Penance, Prayer and Peace. 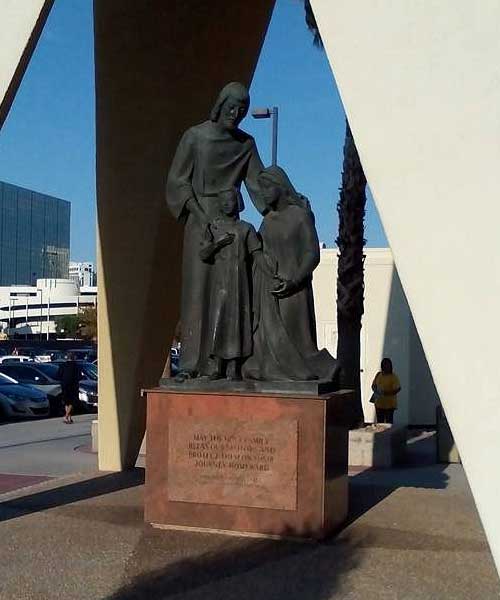 A second mural above the main alter depicts the Guardian surrounded by “swooping angels.” Stained glass windows by Isabel Piczek were installed in the twelve triangular recesses bisecting the A-frame. Each window illustrates a Station of the Cross with gambling themes illustrating the story. (Danny and Rose Marie Thomas donated funds for Window XII.)

The sisters describe their combined aesthetic as Mystic Realism, an art form “that will communicate in inner levels never touched before…ending in happiness—your happiness. The real artwork is not made from glass, paint or tile” but is found within the viewer. (A personal note from the artists on the Roman Catholic Diocese of Las Vegas web site, 2005)

At the time of construction the Los Angeles Times (January 6, 1963) interviewed the shrine’s lighting engineer, Michael J. Garris, a client and colleague of Williams, about the lighting and power system. “The indirect lighting system is unusual, according to Garris. It conceals extremely narrow and shallow troffers which give the interior an overall light value of 15 ft. candle power. Lighting was used to highlight the mosaic wall mural at the front of the church and behind the altar.”

The lighting creates the sense of peace and contemplation Garris and Williams envisioned in their original design. The Guardian Angel Cathedral was renovated in 1995 for $1.3 million, a tribute to the building’s importance. While the Cathedral no longer attracts many employees from nearby casinos, it is popular with tourists. 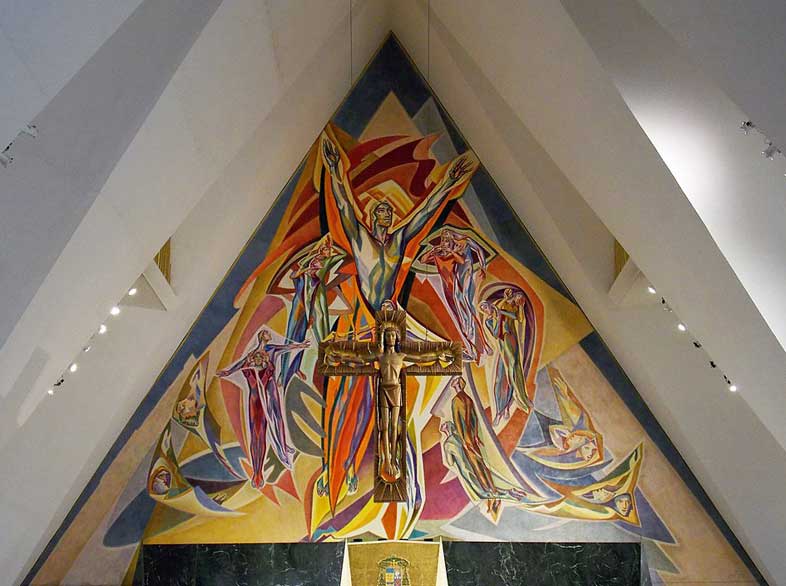 The Memorial of the Holy Guardian Angels is a memorial of the Catholic Church officially observed on 2 October. In some places, the feast is observed on the first Sunday in September with the permission of the Congregation for Divine Worship. 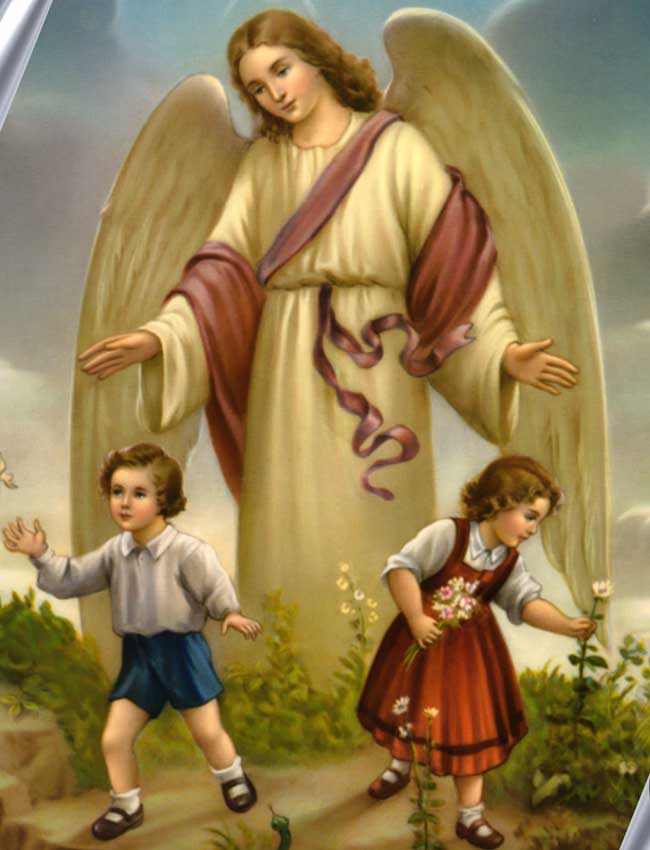