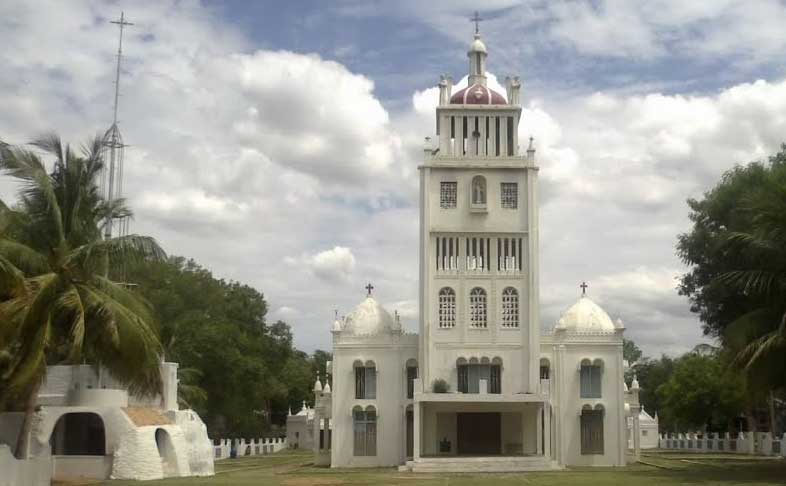 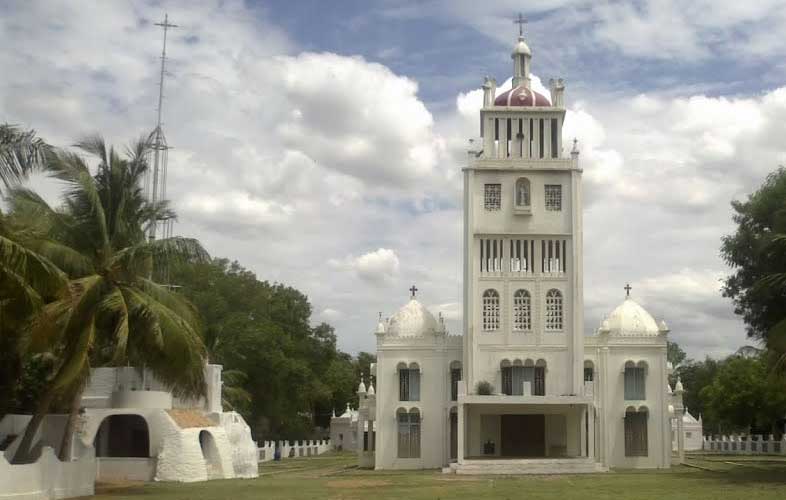 Adaikalamadha Church is located in Elakurichi a small village in Ariyalur district, Tamil Nadu, South India, and a Catholic pilgrimage centre. Elakurichi is one of the earliest historical Christian shrines in Tamilnadu. It is dedicated to Virgin Mary. It is 20 km from Thanjavur. The ancient church built by the famous Catholic Missionary Constanzo Beschi popularly known as ‘Veeramamunivar’ on the year of 1711.

Tamilnadu Government has announced it as a tourist spot in the year 2001. The Adaikalamadha shrine is a sacred pilgrimage centre for Roman Catholics. The state government had spent lots on money to improve the infrastructure for the benefit of devotees coming to the church during festival times.

During this festival pilgrims gather to pray to Mother Mary popularly known as Adaikalamadha from throughout Tamil Nadu, especially pilgrims come by bullock carts from nearby parishes such as Varadarajan Pet, Tennur, Keelaneduvai and Koovathur.

The Village is located in the River bank of Kollidam, the main occupation of the people of Elakurichy is Agriculture. The major crops grown here are rice and sugarcane. Thanjavur and Ariyalur are the nearest cities from this village. The greenery of the paddy fields and flowing River Kollidam are the beauty of this Village. 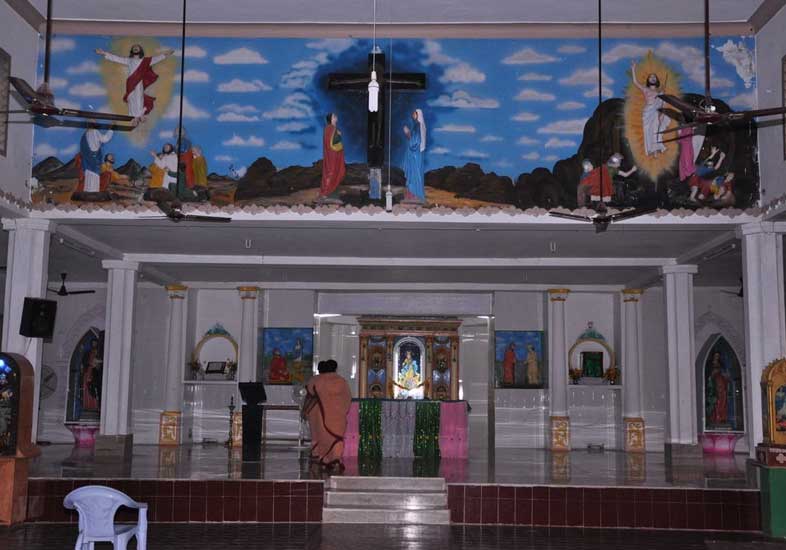 Elakurichi is famous for its ancient church built by the famous Catholic Missionary Constructive Joseph Beschi popularly known as ‘Veerama Munivar’ on the year of 1711. Its origin goes back to the beginning of the 18th Century. At this juncture Fr. Beschi was working in Varadarajanpet and sent to Elakurichi during the Lenten season. Beschi replaced Fr. Emmanuel Machado who had been imprisoned in Vallam fort by Serfoji. The Catholics, who suffered persecution under the Tanjore kingdom, crossed the borders to Elakurichi seeking shelter as well as to save their Catholic faith.

Constantine Beschi is believed to have come to Ariyalur region on missionary work between A.D. 1710 – 1742 and here at Elakurichi he built this Church on a vast land of about 60 acres granted by a local rich landlord as a token of his gratitude to Fr. Beschi, who cured him of a dreadful disease by invoking the blessings of the Holy Mother Mary. An inscription engraved on a stone slab written in A.D. 1763, preserved in this church makes a mention of this grant.

Elakurichi is the most prominent place among the mission centres where Beschi worked. Beschi spent most of his missionary life here. It was here that he composed many of his master pieces like “Thembavani” (an epic on St. Joseph)” Thirukavalur Kalambaham” (a bouquet of poems on our Lady of Refuge). His prose works like “Vedhiyar Ozhukkam”, “Veda Vilakkam” etc. & his grammatical works on classical and spoken Tamil and his famous Tamil dictionary “Sadhuragarathi”. It was at Elakurichi that Beschi started as “Senthamil Kalluri” (Tamil College). 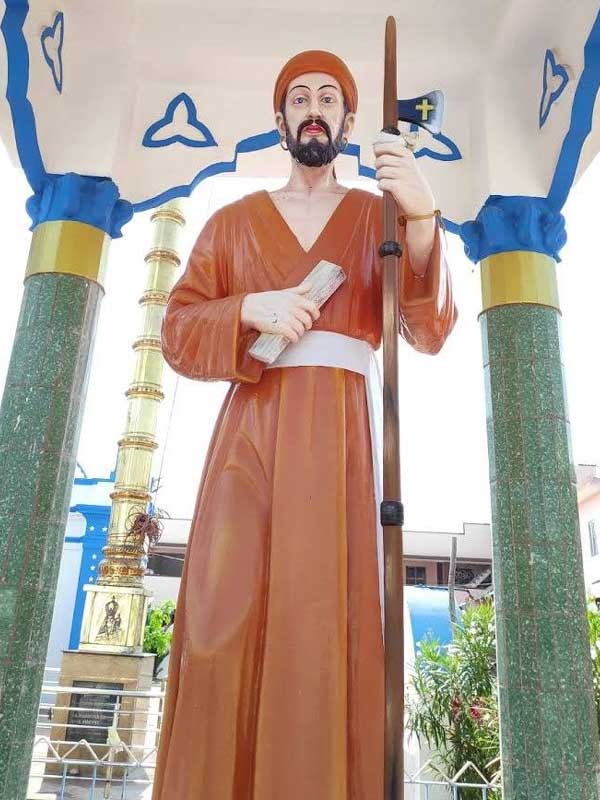 Beschi was transferred to Vadugarpati (Vadugarpettai today). He worked here from 1717 till 1720. We are unable to know where Beschi was after 1720. But we learn that Beschi accompanied Bishop Pinheiro to Mylapore to Maravanad to collect information about the life of John de Britto, a Jesuit missionary.

In a letter dated 19-12-1726 written to Rome, Beschi introduces himself as already the Vicar Forane of Tanjavur. So we can safely presume Beschi was at Elakurichi from 1721 onwards.

During his stay at Elakurichi a very severe famine overtook that area. Thousands of people died of starvation. Mothers sold their infants just for a few measures of rice. The protestant Danish mission at Tranquebar took advantage of this situration. Generously spending the large amount of money that was at their disposal, they began to net the catholics in to their fold. To avail themselves of this monetary assistance, a number of catholics and even some catechists crossed over to their fold.

It was at this juncture that he chose to invoke Mary as “Adaikala Madha” (Our Lady of Refuge) and composed a booklet called “Thirukavalur Kalambaham” in her honour.

Things began to take a new turn. There was good rain and the famine disappeared. The Catholics who strayed away for the sake of money returned to the fold. Miraculous favours began to flow. When a fire accident occurred at that time in the village, in spite of the strong wind the huts of the Christians were untouched by the fire. Fr. Beschi understood that our Lady had come to live with them and protect them.

With the recommendation of the Archbishop of Mylapore he submitted an application, through his Jesuit General in Rome, to His Holiness the Pope for permission to celebrate solemnly the titular feast of “Adaikalamatha” on the third Sunday after Easter every year and also for the sanction of a plenary indulgence for the faithful participating in it. He received the letter of sanction signed by His Holiness himself towards the end of 1733.

About this time the chieftain of Ariyalur, Rengappa Malavarayar came to see Fr. Beschi. He was very much taken up by the learning and piety of Fr. Beschi He was astonished that an European like Beschi could possess such a vast and deep knowledge of “Tamil Grammar” and “Literature”. As a token of his appreciation he donated about 175 acres to this Church. The stone tablet attesting to this fact can be seen even today in the church compound. 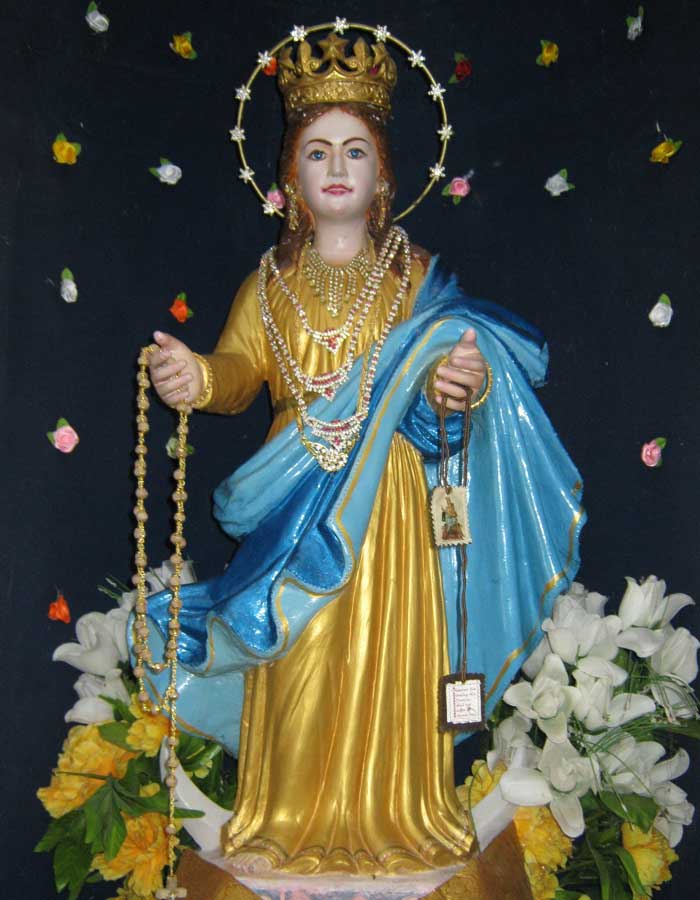 King of Ariyalur Arengappa Malavarayar affected with an incurable cancerous mole (Raja Pilavai) approached Veeramamunivar to heal him. Munivar knowing well of his inability to do so, sought the refuge of Mother Mary. Heeding the prayers, our blessed mother brought forth a miraculous spring like in Lourds. He applied the soil mixed with the spring water on the incurable mole. On the very same night he got cured. In order to thank for the favors received the king donated 175 Acres of land on which stands the present shrine.

Infant Jesus Chapel is located in front of the Madha Kulam (lake).

In order to encourage the devotees to spend time in solitude with the Eucharistic Lord, Church is having a Beautiful Adoration Chapel.

Home for the Aged

Church is running an Old age home to help the needy elder persons.

The poor children are educated in the school run by the shrine.

All the 36 books written by Veeramamunivar and other precious religious books are preserved in the library.

There are more than 25 rooms available for accommodation. 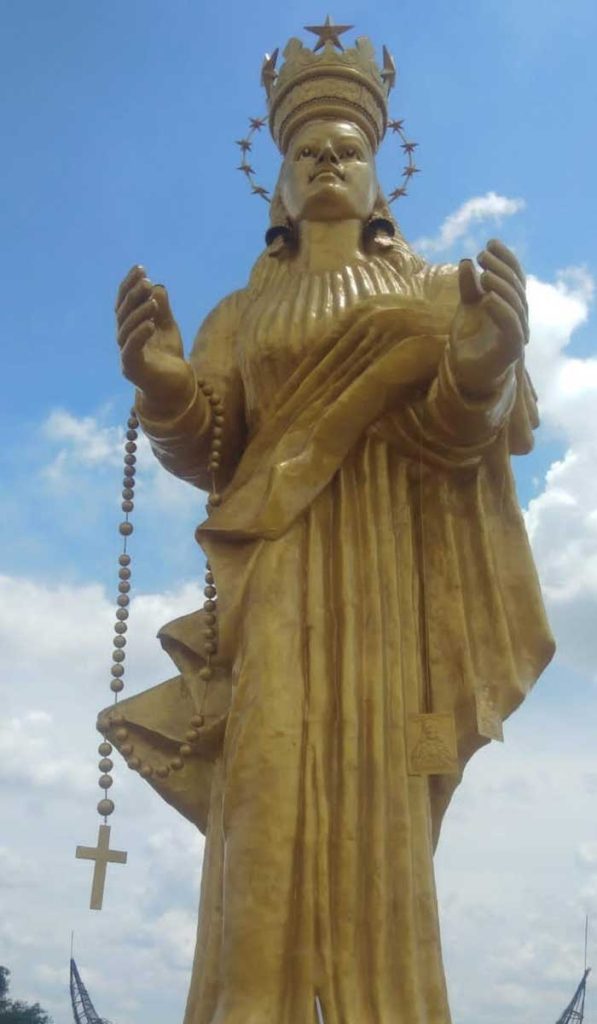 120 Feet high Rosary Park with Adaikala Madha Statue at the Top: The fame of Elakurichi was known the whole of Tamilnadu right from the time of Veeramamunivar. Church has a built a Rosary park, 120 feet high with five layers.

All the statues of Our Lady appeared in different parts of the world will be erected with their historical background and importance.

The history of Elakurichi and miracles of Adaikalamadha will be displayed. The life history of Veeramamunivar and his literary master pieces will also be exhibited.

Lots of children do visit the Shrine regularly. In order to attract them towards the word of God, the biblical stories will be shown in sound and light.

Adoration Chapel will adorn the 4th Layer of the Tower.

On top, 53 feet statue of Adaikalamadha – Our Lady of Refuge made out of mixture of five metals (Pancha Logam) by world renowned sculptures (Stapathis) from Swamimalai, Tamilnadu, India will be erected. 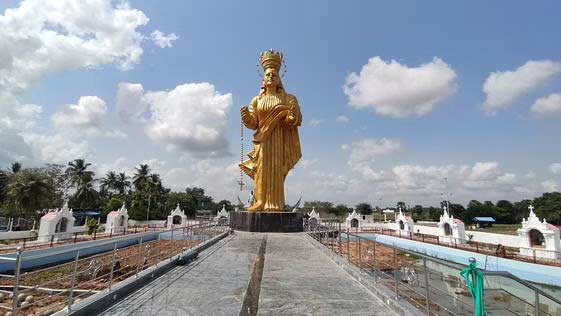 The nearest airport is Tiruchirappalli Airport which is (71.8 Kms) from Adaikalamadha Shrine.

The nearest railway station is Thanjavur Railway Station which is (29 Kms) from Adaikalamatha Shrine.