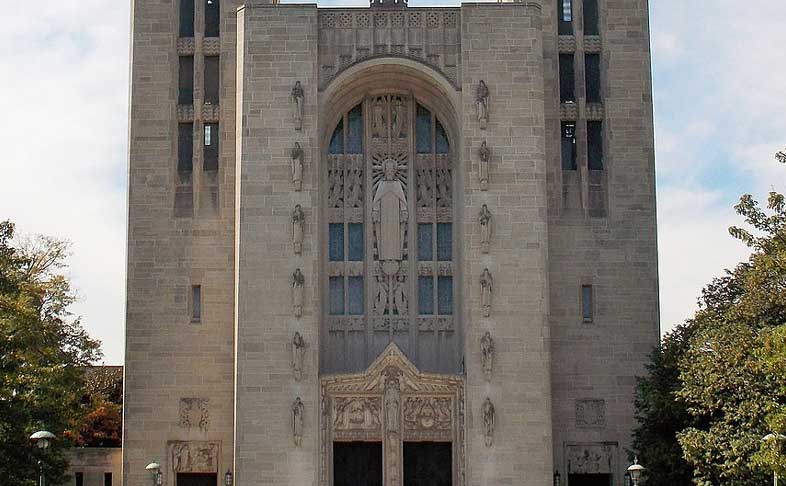 Cathedral of Mary Our Queen, Baltimore 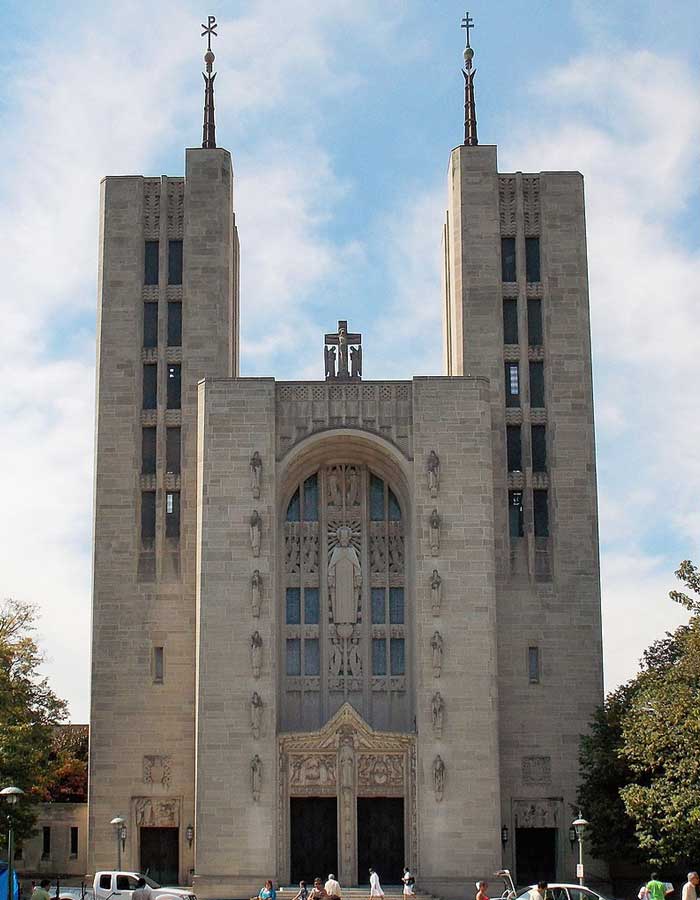 The Cathedral of Mary Our Queen is a Catholic cathedral located in northern Baltimore, Maryland. The structure, remarkable in size, was completed in 1959.

The cathedral is the seat of the Archbishop of Baltimore, joining the Basilica of the National Shrine of the Assumption of the Blessed Virgin Mary, on Cathedral Street at Mulberry Street, in downtown Baltimore. Because the archdiocese is the premier see of the United States and the downtown basilica was the nation’s first Catholic cathedral, this second edifice now serves as co-cathedral.

The cathedral is located in the Homeland area of northern Baltimore near Loyola University Maryland and St. Mary’s Seminary and University, the first Catholic seminary in the United States. It was constructed using funds bequeathed by an Irish Baltimore merchant, Thomas J O’Neill. It is said to be “the only cathedral in the 2,000 year history of the Church that was donated by a single individual.”

History of Cathedral of Mary Our Queen, Baltimore 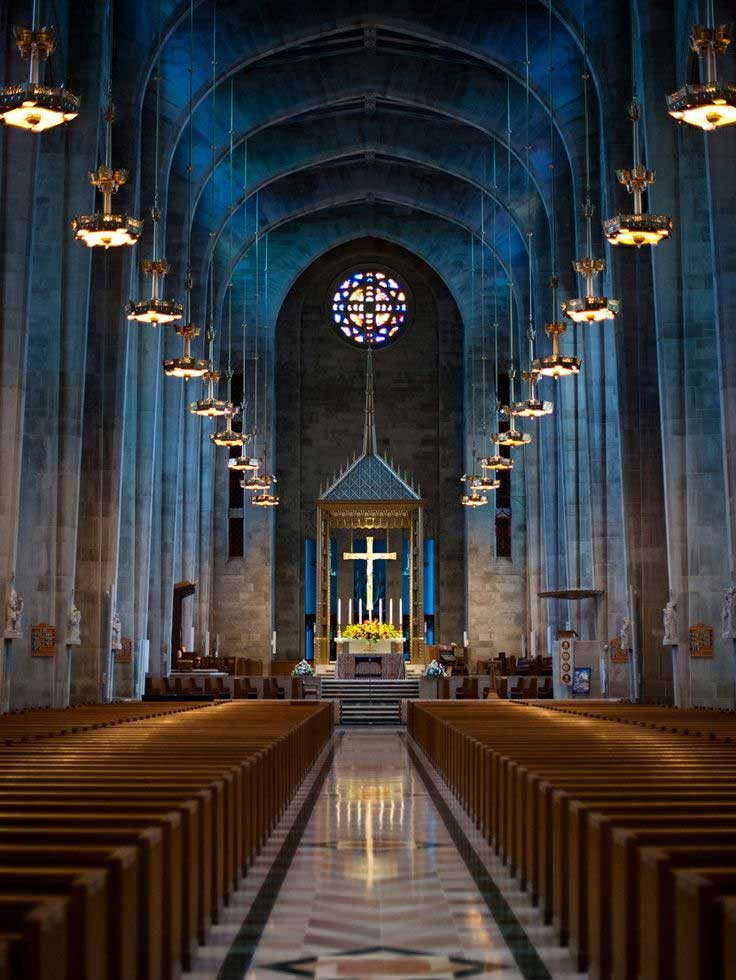 In October 1954, ground was broken for the new cathedral. On the morning of October 13, 1959, a few days past the fifth anniversary of the ground-breaking, Bishop Jerome Sebastian consecrated the cathedral.

“On this land we consecrate a great new cathedral, in the name of the Blessed Trinity, for the glory of God and the perpetuation of the mystical body of Jesus Christ, to the honor of his mother Mary Immaculate, assumed into heaven and Queen forever.” – Most Reverend Francis P. Keough, Archbishop of Baltimore, October 10, 1954.

A fire erupted on the morning of February 7, 1904, in the dry goods firm of John E. Hurst & Co., on what is now Redwood Street. The blaze spread wildly out of control, consuming central Baltimore. In a panic and with few options, city engineers recommended demolishing buildings in the path of the fire to create an artificial firebreak. One building on the fire’s path was Thomas O’Neill’s department store at Lexington and Charles Streets.

The Baltimore Sun reported how O’Neill, a devout Catholic, went to a Carmelite Convent on Biddle Street to pray for the safety of his building. He then rushed back to his store to stop the fire-fighters from setting the charges. Fortunately, the wind shifted so the fire and fire-fighters spared O’Neill’s store from destruction. Thomas O’Neill was convinced that God had answered his prayers. When he died in 1919, he left two-thirds of his estate to the construction of a new cathedral in Baltimore.

The Archdiocese of Baltimore selected the prominent architecture firm Maginnis, Walsh, and Kennedy to design the cathedral on a twenty-five acre lot in Homewood. The firm specialized in architecture for the Catholic Church. Their work in Baltimore included the main administration building for Saint Mary’s Seminary and University, which is in the Beaux-Arts style. In 1948, Charles Donagh Maginnis, an Irish immigrant, received the American Institute of Architects Gold Medal for outstanding service to the profession, the institute’s highest award.

The architects were asked to come up with three designs: traditional, modified and modern. The Archdiocese chose the modified design which combined the traditional Gothic style with modern Art Deco elements. Workers broke ground in 1954, and completed the Cathedral of Mary Our Queen in 1959. The massive cathedral is 163 feet tall and can seat up to 1,900 people.

The cathedral is outfitted with two organs created by the M.P. Moeller Company of Hagerstown, Maryland. Today, the Cathedral of Mary Our Queen serves as the cathedral church of the Primary See, the first archdiocese of the United States and, together with the Basilica of the National Shrine of the Assumption of the Blessed Virgin Mary, serves as one of two main centers of Catholic liturgical life in Baltimore. It is the third largest cathedral in the U.S. and has hosted several dignitaries over the years, including Pope John Paul II.

Architecture of Cathedral of Mary Our Queen, Baltimore 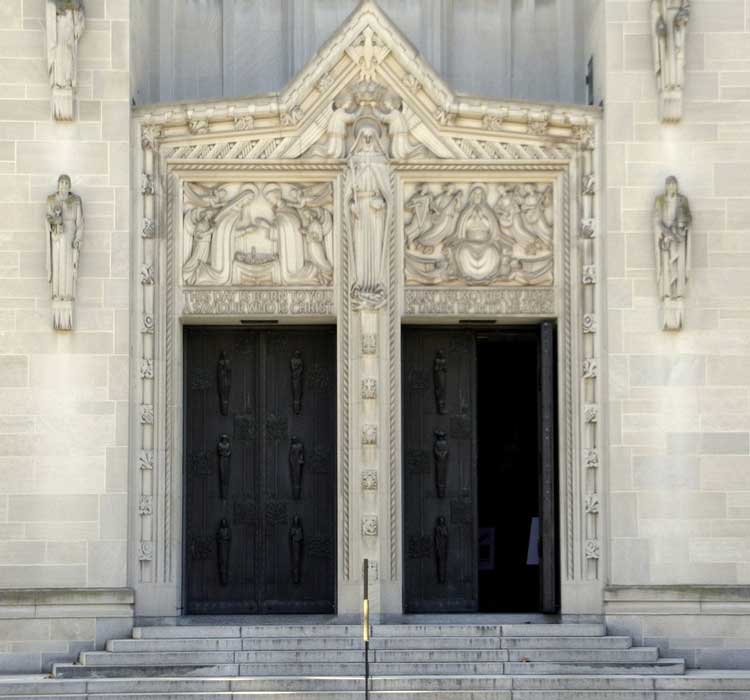 The design is modified Gothic with Art Deco accents, constructed of brick faced with limestone, and uses a classical east-facing cruciform floor plan. The cathedral measures 373 feet (114 m) long, 132 feet (40 m) wide and 163 feet (50 m) to the top of the two spires and can accommodate 2,000 people. The Cathedral features and extensive sculptural program executed by Joseph Coletti.

A cellphone antenna is concealed within one tower, generating revenue for the congregation and diocese. The Cathedral of Mary Our Queen stands as one of the most impressive cathedrals in the world. Thomas J. O’Neill left a bequest to the Church for the construction of a new cathedral that totaled $20 million. The Church of Baltimore selected three well-known architects, Maginnis, Walsh and Kennedy of Boston, had each design a sketch, traditional, modified and modern. Of these designs a modified Gothic design was chosen.

Construction lasted five years for the massive structure. Ground was broken on October 10, 1954 on a twenty-five acre lot on North Charles Street and the dedication of the new cathedral took place on November 15, 1959

The new cathedral was astounding in its size. Built to seat 1900 people, the Cathedral is 373 feet long (41 feet longer than St. Patrick’s Cathedral in New York City), 132 feet wide and 163 feet to the top of the spires. No structural steel was used for support. Over 3 million bricks and 70,000 pieces of Indiana limestone were used for the interior and exterior facing. Additionally, there are over 385 sculptures and 398 panels of stained glass in the nave. There are also four side chapels dedicated to the Blessed Sacrament, St. Joseph, Our Lady and St. Thomas More (patron saint of the benefactor, Thomas O’Neill).

The new church is called the cathedral because it houses the “throne” of the Archbishop. The Cathedral, together with the Basilica, serve as one of the two main centres of liturgical life for the Church of Baltimore. This makes Baltimore one of only a handful of dioceses in the entire United States having more than one cathedral. 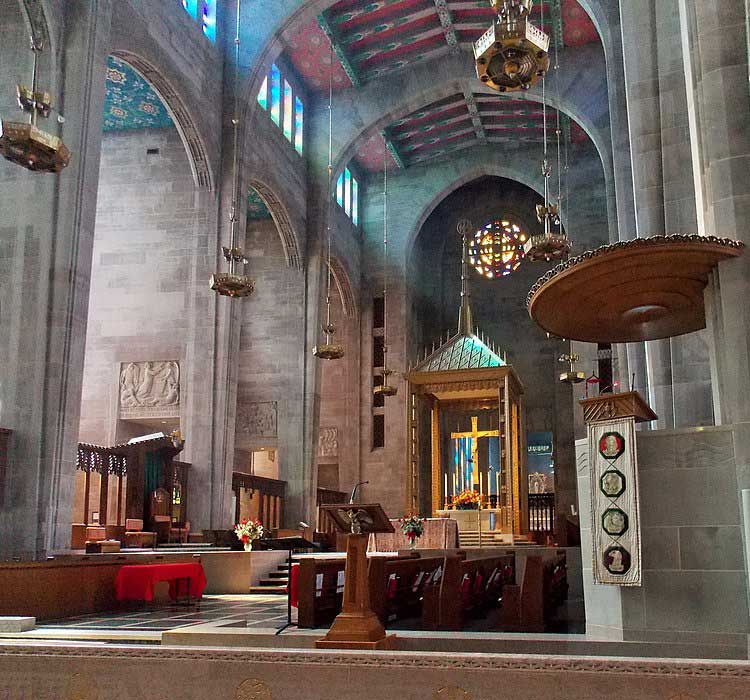 The Cathedral of Mary Our Queen is a spiritual center for a place that has served a very important role in America’s Catholic heritage. On the gallery wall in the nave of the Cathedral are two plaques carved into the stone depicting the Ark and the Dove. It was on these two ships that the first Catholic settlers came to the New World in 1634.

Onboard with them was Cecil Calvert, the second Lord Baltimore, who sought to establish a financially successful colony that would also provide religious liberty. Two Jesuit priests on these ships celebrated the first Mass in America on Saint Clement’s Island in the Chesapeake Bay on March 25, 1634.

How the Cathedral of Mary Our Queen Came to Be

The Cathedral is the gift of one man, a circumstance which most likely is unique in the history of cathedral building. The donor, Mr. Thomas J. O’Neill (1849-1919), owned a successful dry goods store at Charles and Lexington Streets, with nearly 500 employees. On February 7, 1904, the infamous Baltimore fire, which wiped out 1,343 buildings in a 75-block arc, was crawling towards O’Neill’s store. Just as the flames reached the south wall, the wind shifted and sent the holocaust eastward, and his store escaped destruction.

This gave rise to a number of colorful stories about how O’Neill refused to allow his building to be destroyed as the fire broke, and how he raced off to a Carmelite convent to enlist the prayers of the Sisters. Whether or not this legend is true, the existence of the Cathedral of Mary Our Queen almost certainly is connected to the salvation of Thomas O’Neill’s livelihood.

In his will, he specified that upon his wife’s death (in 1936; they had no children) and the payment of a grant to Loyola College, two thirds of his estate were to become available for the building of a new cathedral in Baltimore, while the remainder was to be devoted to the construction of a hospital.

Origin of the Cathedral’s Name

In October 1954, ground was broken for the Cathedral. Dedicated in 1959, the contemporary Gothic structure was made possible through the generous bequest by Mr. O’Neill.

The day after the Cathedral’s groundbreaking ceremony, His Holiness, Pope Pius XII, issued a world letter instituting May 31 as the feast of Mary as Queen to be celebrated throughout the entire world. The pope’s decree honoring Mary led to a decision to name the new cathedral after Our Lady’s Heavenly Coronation as Queen. 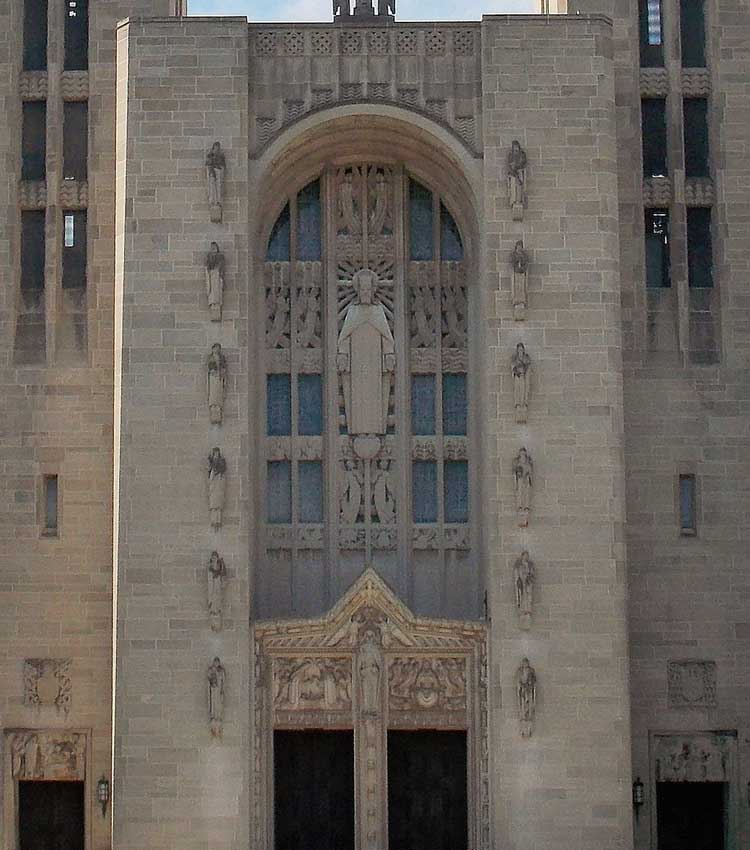 Consecration of the Cathedral

On the morning of October 13, 1959, a few days past the fifth anniversary of the ground-breaking ceremony, the Cathedral was solemnly consecrated. In an elaborate ritual that dates back, in part, to primitive Christianity and flavored richly by the Old Testament, Baltimore’s Auxiliary Bishop, Jerome D. Sebastian, consecrated the regal building to divine worship.

The official dedication occurred on Nov. 15.

Visit by The Pope

In 1995, the Cathedral was honored by a visit from His Holiness, Pope John Paul II. A plaque outside the Blessed Sacrament Chapel and photos in the Narthex commemorate the visit. The Pope celebrated Mass in the Archdiocese at Oriole Park at Camden Yards and visited both the Cathedral and the Basilica of the National Shrine of the Assumption.

This was the second visit by the pontiff. The first was in 1976 when, as Karol Cardinal Wojtyla, Archbishop of Krakow, he visited the United States for the Eucharistic Congress in 1976. His predecessor, Giovanni Montini, then Cardinal Archbishop of Milan, also visited the Cathedral in 1960 before becoming Pope Paul VI. 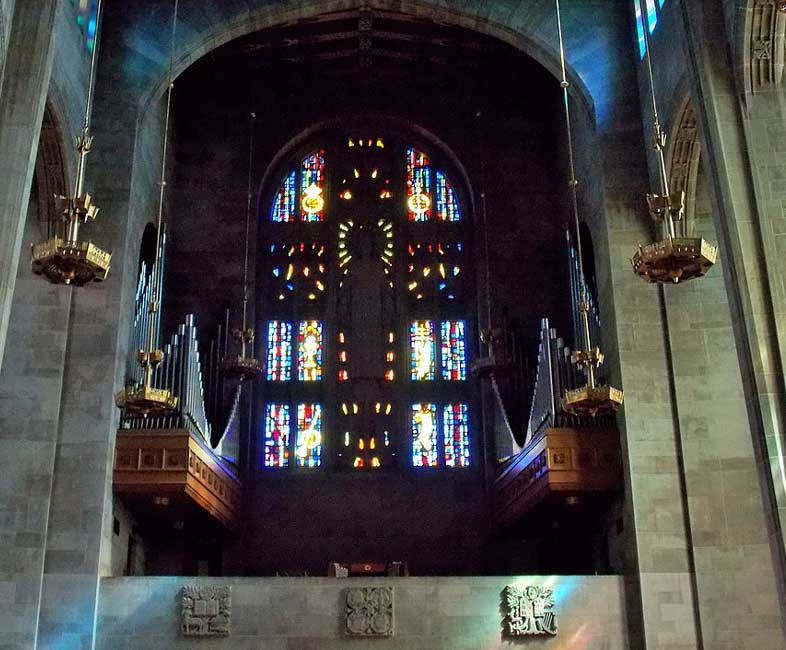 The cathedral has two organs. The original organs were Opus 9200 of the M. P. Moller Company of Hagerstown, Maryland. After 46 years of use and some considerable damage due to water and smoke the congregation decided to restore the cathedral organs in 2005. It chose Schantz Organ Co. of Ohio to restore and replace many parts of the original instruments. The restoration began with the removal of the Great Gallery organ and, after it was reinstalled and operable, work began on the Chancel organ.

In addition to new pipe work, voice work, new wind chests, Schantz built two new identical four-manual consoles: one for the Gallery and one for the Chancel allowing the organist to control both organs from either location. The chancel console can be moved around the sanctuary to suit various needs. In the original Moller installation, the Great Gallery organ console had four-manuals and could control over both the Gallery and Sanctuary organs.

The first solo concert performance on the restored organ occurred July 5, 2007 by Cherry Rhodes as part of the closing ceremonies of the American Guild of Organists regional convention held in Baltimore. 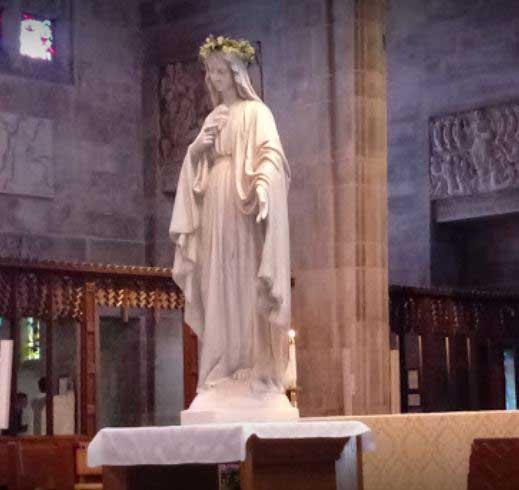 The Cathedral is an educational centre with an outstanding parochial school. It offers programs for Catholic students attending non-Catholic schools, religious and support programs, and programs for those interested in joining the Catholic faith. It is an important part of the spiritual and temporal life of each of us who worships here.

One of the outstanding religious structures in the United States, the Cathedral is a unique house of worship that attracts hundreds of visitors of all faiths every year.

The Annual Feast of Mother Mary Immaculate is held on 8th December.

Baltimore (BWI) Airport is the nearby airport to the Cathedral.