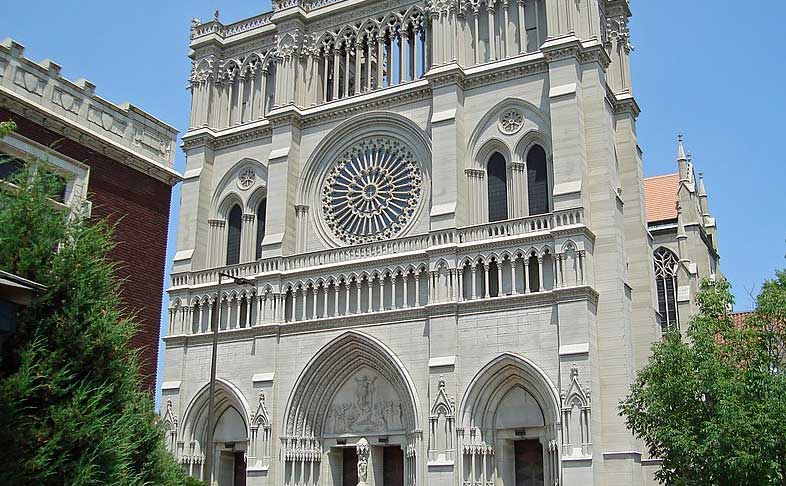 Cathedral Basilica of the Assumption, Covington 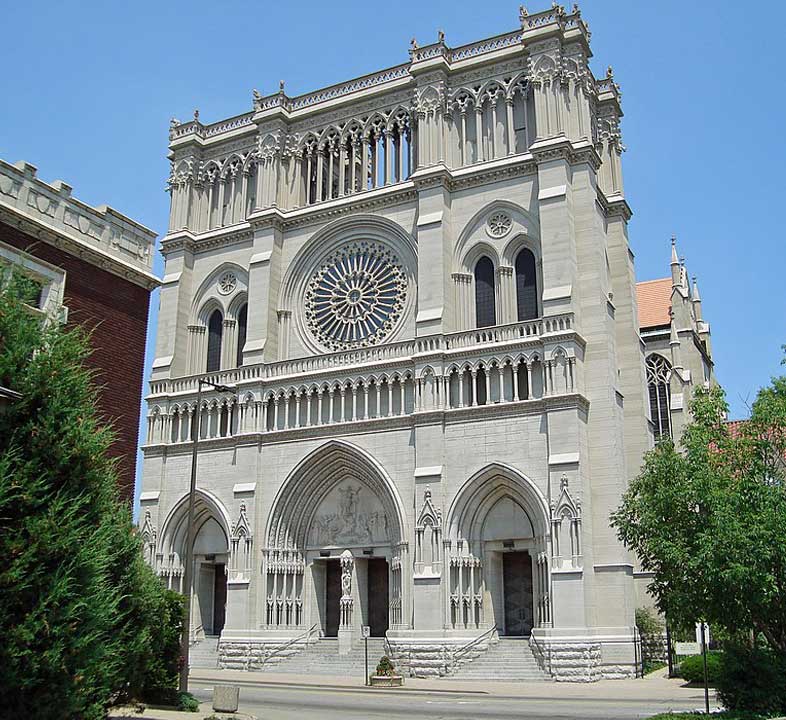 The Roman Catholic St. Mary’s Cathedral Basilica of the Assumption in Covington, Kentucky, is a minor basilica in the United States. Construction of the cathedral began under the Diocese of Covington’s third bishop, Camillus Paul Maes, in 1895 to replace an 1834 frame church that was inadequate for the growing congregation. Pope Pius XII elevated the cathedral to the rank of minor basilica December 8, 1953.

In June 2021, 24 statues were installed in the long empty niches at the Cathedral’s entrance to complete the building’s long unfinished facade. The statues were designed by the Pennsylvania based artist Neilson Carlin, with each honouring various parishes and institutions located within the diocese. They are made of Bedford limestone, reportedly sourced from the same quarry which provided material for the original construction of the church. Above the northernmost door is a tympanum depicting the Annunciation. From left to right, the statues depict Saint John the Baptist; Saint Barbara; Saint James the Great; Saint Agnes; Saint William of York; and Saint Timothy.

A tympanum depicting the Assumption of Mary sits above the central doors, with a statue of Mary presiding between them. From left to right, the eight additional statues depict Pope Saint Pius X; Saint Patrick; Saint Benedict; Saint Joseph; Saint Boniface; Saint Henry; Saint Catherine of Siena; and Saint Charles Borromeo. A tympanum of the Coronation of Mary sits above the southernmost doors. From left to right, the statues depict Saint Augustine; Saint Therese of Lisieux; Saint Anne; Saint Bernard; Saint Rose of Lima; and Saint John the Evangelist. Four additional statues reside on niches located on the front buttresses of the Cathedral. From north to south they depict: Saint Thomas More; Saint Paul; Saint Peter; and Saint Elizabeth of Hungary.

Originally opened as St. Mary’s Church in 1837, the first Roman Catholic Church in Covington, by 1895 the St. Mary’s Cathedral was nearly complete: the interior being modelled after the Abbey Church of St. Denis in Paris while the facade would mirror Notre Dame de Paris. Built in the 13th Century French-Gothic style, and constructed of Indiana limestone, the Cathedral’s interior shines with beautiful appointments. Among them, 82 hand-poured stained glass windows crafted in Munich Germany, including the 24-foot wide by 67-foot tall window in the north transept, one of the largest in the world.

Two rose windows (each being 26 ft. in diameter) grace the west and south clerestory and are modelled after those in Notre Dame Cathedral. The Stations of the Cross, which line the peripheral walls, are made of Italian mosaic. Each mosaic contains at least 70,000 pieces and measures 3-feet wide by 6-feet tall. The Blessed Sacrament Chapel contains a triptych portraying the history of salvation by area realist painter, Frank Duveneck. The font of the Baptistry is carved from one solid block of marble from Pietrosanto, Italy. A baldochino (canopy) of carved

Appalachian white oak soars over the apse area inset with hand-carved figurines of saints. In 1953, St. Mary’s Cathedral was designated a minor basilica by Pope Pius XII, hence her present name ~ Cathedral Basilica of the Assumption. 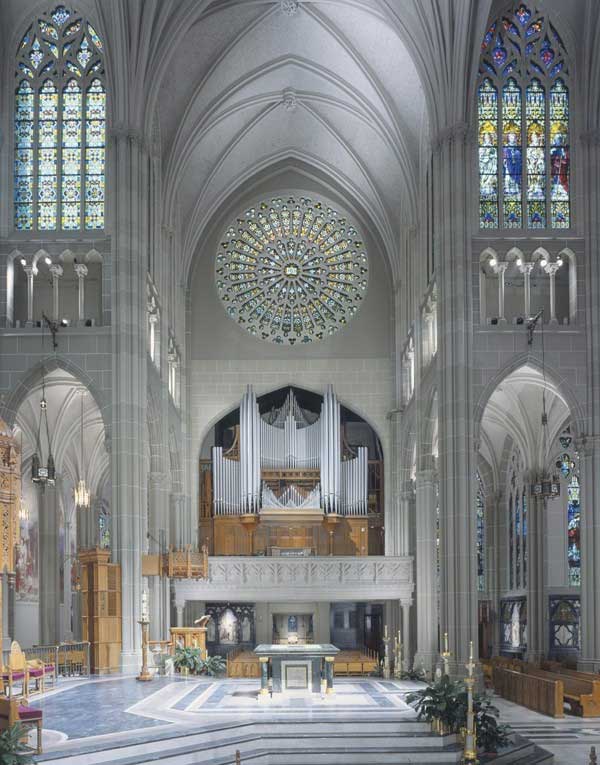 History of the Cathedral Basilica of the Assumption

Building the Cathedral was the dream of the Most Reverend Camillus Paul Maes, third Bishop of the Diocese of Covington.

The project began in 1894 and ended in 1915, incomplete. Though largely unfinished even today, the Cathedral is a monument which speaks of the faith and determination of the Bishop and the community. It is an art and architectural monument to be treasured for centuries by people everywhere.

Traditionally, churches attained the title of basilica because of their antiquity, dignity, historical importance, or significance as centres of worship.

Pope Pius XII elevated St. Mary’s Cathedral to the rank of minor basilica on December 8, 1953 during a Solemn Pontifical High Mass celebrated by the Most Reverend William T. Mulloy, D.D. 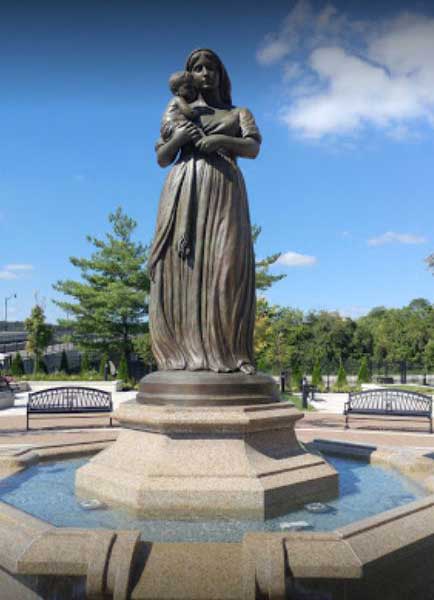 Gothic architecture was indicative of the economic and cultural world view of the middle Ages. Built with contributions of self-conscious and pious merchants, cathedrals were the physical centres of expanding commercial cities. A cathedral, the bishop’s church by definition, was the locus of religious life for the community.

The most bizarre and fascinating element which adorned a cathedral are the sinister gargoyles. In addition to diverting rainwater away from the cathedral, their chimeric designs personified human qualities antithetical to the behaviour of virtuous Christians. The central entrance features statuary and stone carvings by the honoured American sculptor, Clement Barn horn. Atop its twin-towered facade, 32 gargoyles reach out from the ornate upper colonnade, and 26 chimeras stand watchful guard against evil spirits. 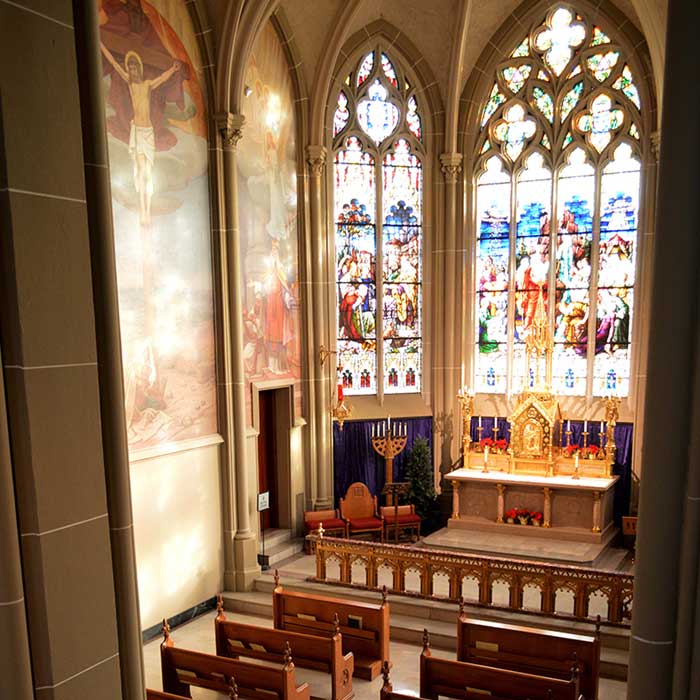 The floor plan of a Gothic cathedral was essentially a conglomeration of squares and rectangles, at the corner of which ascended piers that stretched skyward to support the canopy of arches. The distinguished innovation of the ribbed, or groin, vault enabled the cathedral builders to canopy vast expanses.

The intersection of two pointed arches, held in place by a keystone, formed the ribbed vault. These vault arches, which were its groins, or ribs, distributed and channelled the weight of the stone vault down the piers to the ground below. The groin vault provided the architects of the cathedrals with a technological advancement that was lighter and more flexible than former vaulting systems.

In 1834, St. Mary’s Church was dedicated by Bishop Purcell of the Diocese of Cincinnati as the first Catholic Church in Covington, Kentucky. But by 1851, because of a rapidly growing Covington population, St. Mary Church became insufficient to accommodate the needs of the parish. That year, the congregation purchased a lot on the north side of Eighth Street between Greenup Street and Scott Boulevard for the site of a new church.

On July 29, 1853, Pope Pius IX established the Diocese of Covington and the first bishop were appointed. The bishop chose the site purchased for St. Mary’s Church for the construction of a diocesan cathedral and laid the cornerstone on October 2, 1853. As early as 1868 the parish had outgrown the cathedral but due to several circumstances, including the death of the bishop and the congregation’s debt, plans for a new cathedral were put on hold until 1885. 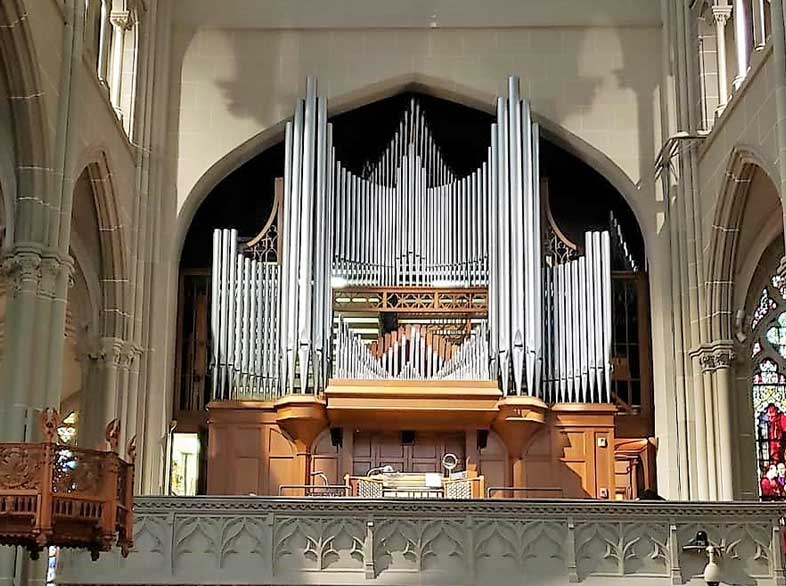 In 1885, Reverend Camillus Paul Maes successfully commenced the planning for the construction of a magnificent cathedral. In 1890, he purchased the Delaney residence on the northeast corner of Twelfth Street and Madison Avenue, a site considered the centre of the city of Covington, for the planned cathedral. Later he acquired the McVeigh property creating a total site for the new cathedral measuring 118-3/4 feet by 190 feet.

To design the cathedral, he contacted Leon Coquard, an artist and architect who had experience in designing ecclesiastical architecture. There were many negotiations between the bishop and architect, but they were able to reach agreement and the specifications for the cathedral were completed by late 1893. At that point, Bishop Maes began to solicit “subscriptions” to fund the cost of construction. Thanks to many private donations, including $100,000 from wealthy distillers Peter O’Shaughnessy and James Walsh, construction was able to commence.

Ground was broken on April 13, 1894 and construction of the cathedral began in mid-July. On September 8, 1895, Bishop Maes placed the cornerstone in the presence of thousands of people who came to witness the auspicious occasion. The vaults, columns, and walls of the nave, transept, and apse were complete by September of 1897 and plans were made to construct a steel roof over the Cathedral.

In January of 1901 the nave, apse, and transept were completed. Funds had dissipated, inhibiting the construction of a facade or the installation of the stained glass windows, so a plain brick wall closed the nave and temporary plain glass windows were installed and then

glazed to remove the glare. Bishop Maes dedicated the cathedral for use on January 27, 1901. Specifications for the building of the facade were not completed until 1908 (once sufficient funds had been raised). Construction began in 1908 and was completed, along with the stained glass window installation in 1910. Instead of additional external adornment, Bishop Maes instituted a program of interior beautification, most of which Bishop Brossard completed after the death of Bishop Maes in 1915. 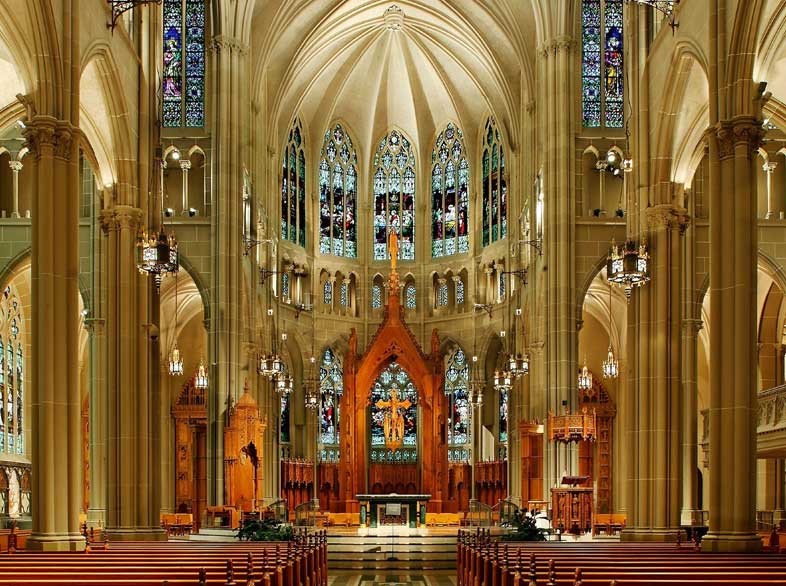 The sanctuary was designed by Detroit architect Leon Coquard and is inspired by the Notre Dame Cathedral in Paris. Services were first held in 1901 with the Madison Avenue façade, designed by local architect David Davis, added between 1908 and 1910. The structure is constructed of Bedford stone and the roofs are covered with red ludovici tile. It measures 194 ft. × 144 ft. (59 m × 44 m) and the nave reaches a height of 81 ft. (25 m). The cathedral project terminated in 1915, though it remains incomplete to this day with the planned 52 ft. (16 m) towers inbuilt.

The interior was modelled after St. Denis in France. It contains murals by Covington native Frank Duveneck with the high altar carved from Carrara marble with floors of Rosata and Breche marble.

The Cathedral is famous for what is said to be the world’s largest handmade church stained glass window, at 67 ft. × 24 ft. (20.4 m × 7.3 m). Located in the North Transept of the Cathedral, the upper portion depicts the Coronation of Mary after her Assumption. The lower portion is a depiction of the Ecumenical Council of Ephesus in 431 AD that proclaimed Mary the ‘Theotokos’ (God-Bearer or Mother of God). The window was created by Mayer and Company of Munich, Germany, and installed in 1911. It was fully restored in 2001.

Detail of the north transept window depicting the Coronation of Mary and Council of Ephesus.

The cathedral houses three pipe organs. The south transept gallery holds the pipe organ designed and built in 1933 for the cathedral by Henry Willis III during his tenure at the Wicks Organ Company of Highland, Illinois. Originally a three-manual console with 43 ranks of pipes, Aultz-Kersting Organ renovated and enlarged this instrument in 1982 to four-manuals with 65 ranks.

The west gallery, below the rose window, is occupied by the two-manual organ originally built for St. Joseph Roman Catholic Church in Covington, Kentucky, in 1858 by Mathais Schwab of Cincinnati, Ohio. When the St. Joseph building was razed in 1970, the Schwab organ was moved to St Mary’s. The Schwab organ was altered to fit the new location, but retains most of its original components, including its mechanical key and stop actions, ivory keyboards and faux-grained casework. It contains 21 ranks. In 2002, the cathedral purchased a one-manual, 20-rank portable organ for use in various parts of the sanctuary. 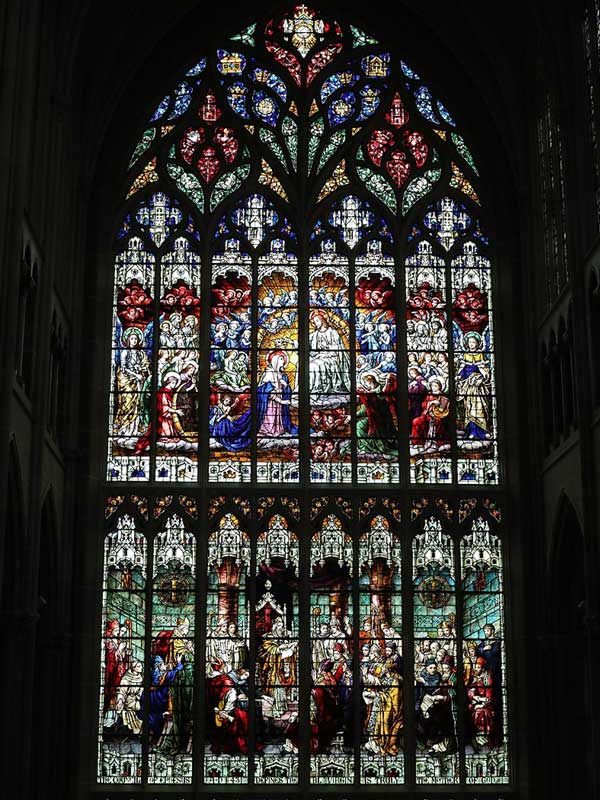 Annual Feast of the Cathedral Basilica of the Assumption, Covington, Kentucky will be held on 15th August.

The nearest major airport to the Cathedral is Cincinnati Municipal Lunken Airport (LUK / KLUK). This airport has domestic flights from Cincinnati, Ohio and is 9 miles from the center of Covington, KY.