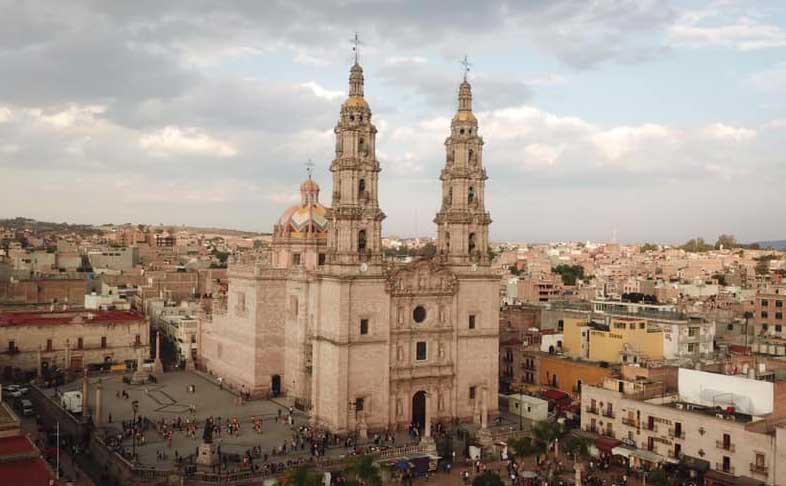 The first shrine was built by Diego de Camarena in 1642, now known as the chapel of the First Miracle (capilla del Primer Milagro). Later, in 1682, he completed the construction of the second sanctuary, which is now the parish of San Juan Bautista. In the period 1732–1769, Carlos Cervantes, bishop of Guadalajara, was responsible for the construction of the current basilica. This earned the rank of cathedral 1972, through the Apostolic Constitution of Pope Paul VI.

For much of the pre-Hispanic period, the Altos area was inhabited by groups of Tecuexes and Nahuas who formed small independent states in the 12th century. Soon after, these dominions would fall under the rule of a single Tecuexe state, with its capital at Metzquititlán. 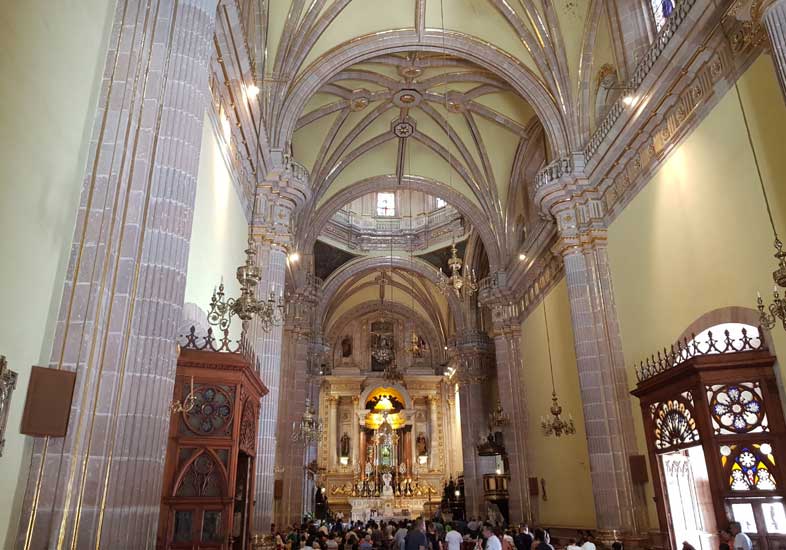 The Statue was in poor condition at the time of the first miracle because of its composition. Made of pasta de Michoacan, a combination of cornstalks and glue, it was brittle and considerably damaged by the elements. Because of its sad state, the grateful father asked if he might take the statue to Guadalajara to have it restored. The pastor, Don Diego Camarena, gave his permission and sent two Indians of the village to accompany him so that they could return the statue to the chapel while the acrobat went on his way.

As soon as they arrived in Guadalajara, they were approached by a man who asked if they were in need of someone to repair a statue. Since he was an artist, he offered his services. After settling on a price, the artist was entrusted with the statue. In a few days, the image was returned beautifully restored, with the face and hands of exceptional beauty.

The artist however had vanished, and no one could tell the acrobat anything about him. The circumstances surrounding the artist have always remained a mystery. The detailed reply presented by Nicolas de Arevalo provides the researcher with all the facts regarding the early history of the image and its sanctuary. By the year 1732, the sanctuary was unable to accommodate the multitudes who pilgrimaged from all parts of Mexico to observe the feasts of Our Lady. The first stone for a magnificent temple was laid in November of the same year.

A great distinction was awarded the shrine on August 15, 1904, when the statue was liturgically crowned by Don Jose Jesus Ortiz, the archbishop of Guadalajara. Pope St. Pius X authorized the crowning because of the great devotion to Our Lady of San Juan de Los Lagos, the antiquity of the statue, and the abundance of miracles attributed to Our Lady’s intercession through the miraculous image.

The crown used for the ceremony is of gold measuring some seven inches high and weighing six pounds. It is adorned with 197 precious stones including diamonds, emeralds and sapphires. Although the statue is made of a substance composed of cornstalks and glue, which has a tendency to crumble in a relatively short time, the image has remained in excellent condition for over 350 years.

Measuring about a foot in height, the face is well proportioned and slightly dark in color and the hands are gracefully joined in prayer. The statue is clothed in beautiful garments and stands atop a crescent moon. Above the image are two Angels of silver who support between them a silver ribbon with the words in blue enamel: Mater Immaculata, ora pro nobis. 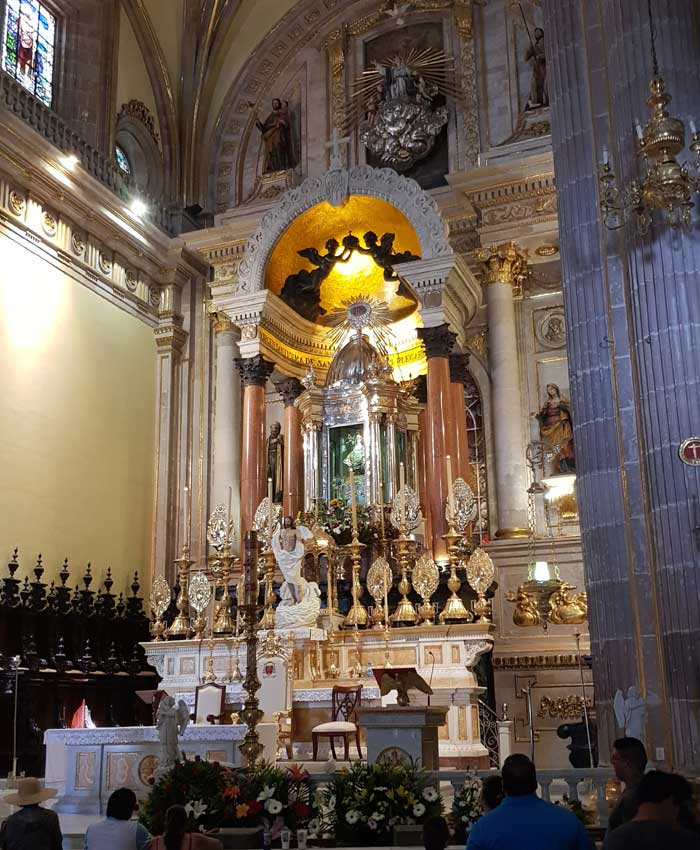 The present church, begun in 1732, was built in the Mexican baroque style. The statue of the Virgin was installed in 1769 and the bell towers were completed in 1790. In 1972 the church was recognized as a basilica. Inside the church, upon a platform with an upturned crescent moon, stands the statue of the Virgin. The face is dark in color, the eyes widely spaced and the traits somewhat aquiline.

About 20 inches (50 cm) tall, the statue was made by the Tarascan State of southern Mexico using an indigenous technique called titzingueni, in which a frame of wood is covered by a paste of corn pith and orchid juice, and then coated with gesso and painted. Similar statues are still venerated in other parts of Jalisco: Nuestra Señora de Los Altos (Our Lady of Los Altos) in the town of San Francisco de Asís, Atotonilco El Alto, Jalisco; Nuestra Señora de la Salud (Our Lady of Health) in Pátzcuaro; and the Virgin of Zapopan in the city of Guadalajara.

Sometime in the late 16th or early 17th century the statue was modernized by being enclosed in a frame and draped with clothing. The Virgin’s hands are joined in prayer, she has long brown hair, and wears a white gown and blue robe. The statue’s body is covered with a golden crown in Byzantine style. Above the image are two angels of silver, supporting between them a silver banner with the Latin inscription in blue enamel: Mater Immaculata ora pro nobis (Immaculate Mother pray for us). 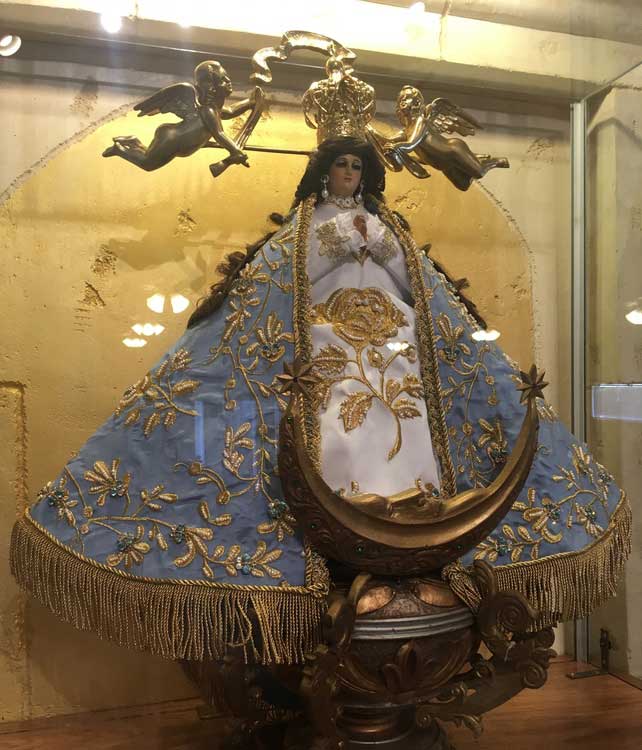 Our Lady of San Juan de los Lagos (English: Our Lady of Saint John of the Lakes) is a Roman Catholic title of the Blessed Virgin Mary venerated by Mexican and Texan faithful. The original image is a popular focus for pilgrims and is located in the state of Jalisco, in central Mexico, 122 kilometers (76 mi) northeast of the city of Guadalajara. The statue is venerated both in Mexico and in the United States where it is known by its proxy title Nuestra Señora de San Juan del Valle (Our Lady of Saint John of the Valley), mainly focused in Texas.

Pope Pius X granted the image a Pontifical decree of Canonical coronation on 29 January 1904. The rite of coronation was executed on 15 August 1904 via the Archbishop of Guadalajara, Jose de Jesus Ortiz y Rodriguez.

The image is widely known for the jeweled regalia offered by its devotees and is permanently enshrined at the Basilica Minor of San Juan de los Lagos in Mexico.

History of Our Lady of San Juan de los Lagos 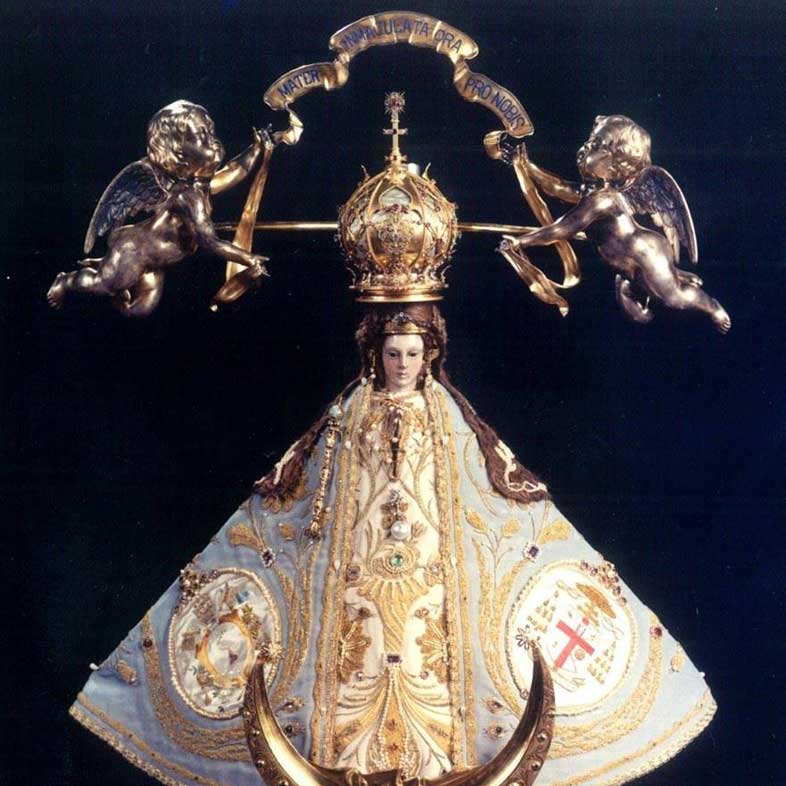 The sanctuary’s history begins in 1543 when Father Miguel de Bologna, a Spanish priest, brought a statue of the Virgin of the Immaculate Conception to the village. The town was then called San Juan Mezquititlan Baptist but its name was changed to San Juan de Los Lagos in 1623. According to local histories, and some eyewitness accounts, a certain aerial acrobat was traveling along the Camino Real, “the Royal Highway,” from San Luis Potosí to Guadalajara, performing in the towns along the way.

His act included his wife and two daughters. His stunts included swinging from one high point to another by means of ropes, in somewhat the same fashion as trapeze artists of today. To add excitement and an element of danger, the artists had to fly over swords and knives that were stuck in the ground with their points positioned upward.

While performing in the village, the younger daughter, a child of six or seven, slipped, fell upon the knives and was mortally wounded. After preparing the body and wrapping it in burial cloths, the grieving parents brought the child’s body to the chapel of Our Lady of San Juan for burial.

Meeting them at the door of the chapel was the 78-year-old Ana Lucia, the wife of Pedro Antes (the caretaker and custodian of the beloved statue). Feeling pity for the grieving family, she exhorted them to have confidence in The Virgin, who could restore the child to them. Taking the statue from its altar in the sacristy where it had been consigned because of its poor condition, Ana Lucia laid it near the child’s dead body. In a few moments, they detected a slight movement under the shroud.

The parents quickly unwrapped the cloth to discover the child well and unharmed.  This first miracle of Our Lady of San Juan de Los Lagos became known in neighboring villages and towns. Numerous other miracles and favors followed, until now Our Lady is venerated by pilgrims from throughout Mexico and the United States.

Following this miracle, the statue began to be venerated by an increasing number of pilgrims including Indians, Spanish and mestizos. During this period the statue acquired its own local identity as Our Lady of San Juan de los Lagos. Between the early 17th century and the middle of the 19th century a pilgrimage fair was held each year on November 30 to celebrate the original installation of the statue in the shrine. 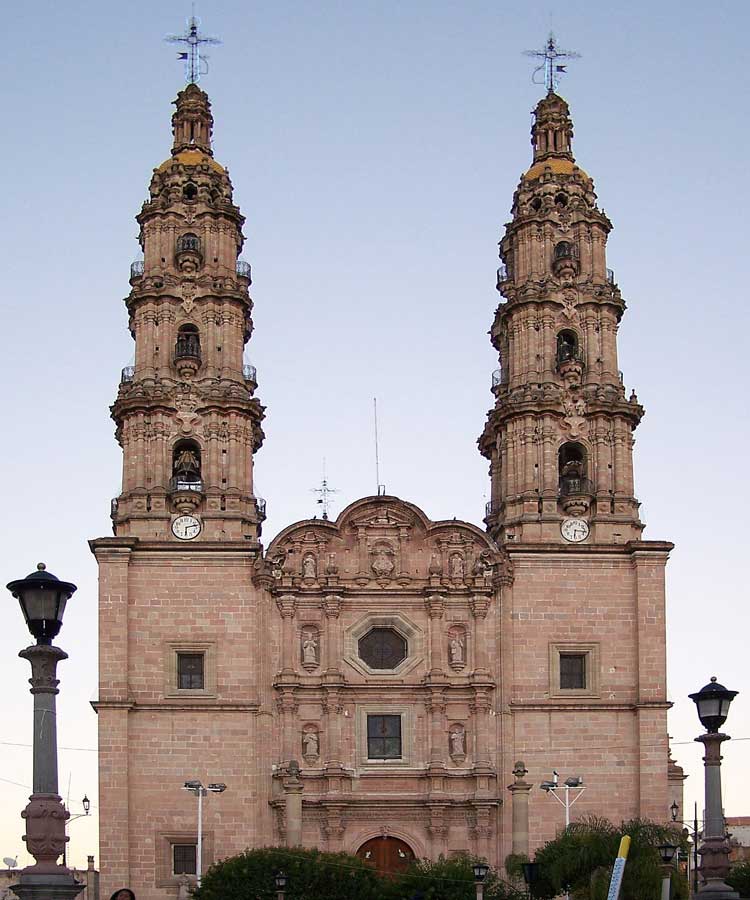 At the end of January and beginning of February each year a great pilgrimage occurs to the shrine and the city grows many times in size. This festival is attended by more than a million people, many of them walking, from all over Mexico.

During a week of festivities there are hundreds of temporary stalls selling pilgrimage icons, multiple bands of musicians playing around the great basilica, fireworks demonstrations in the evenings, and a palpable feeling of spiritual joy descends upon the town. If a family member falls ill or undergoes a serious surgery for example, you can promise the Virgin to make the pilgrimage if that person makes it out okay.

In the 1950s, the devotion spread to the Rio Grande Valley of Texas. A reproduction of the Mexican image is housed in the Basilica of the National Shrine of Our Lady of San Juan del Valle in San Juan, Texas. This shrine is one of the largest Catholic sanctuaries in the state, and is known for its relationship with the migrant farm workers who still travel through this area of Texas.

The devotion also arrived in New Mexico and the church of Nuestra Senor de los Lagos was built in 1828 in Talpa, New Mexico. 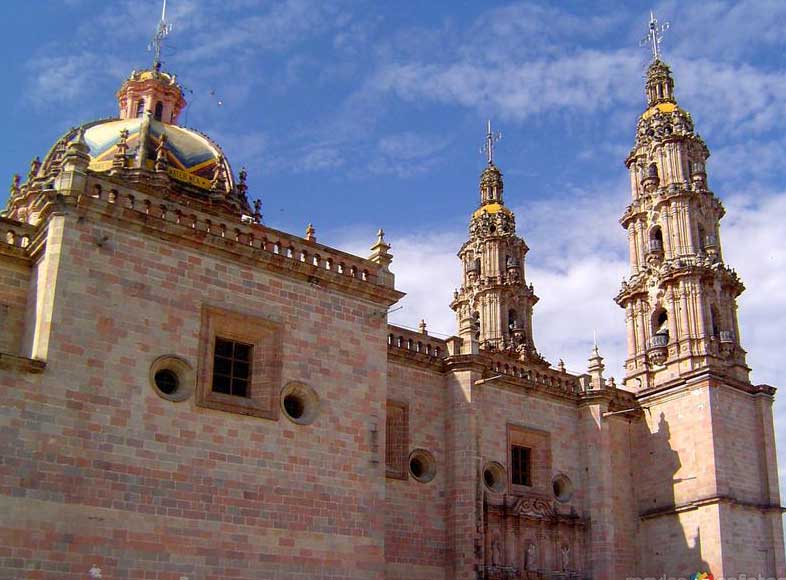 The Conquest and the First Evangelization

Ten years later there was the uprising of the caxcanes and tecuexes tribes that inhabited the region, but were defeated by the forces of Cristobal de Onate, governor of New Galicia, and Don Antonio de Mendoza, Viceroy of New Spain.

After the war, Fray Antonio de Segovia, first evangelizer of the tecuexes, instructed Fray Miguel of Bologna pastoral care of these lands; Fray Miguel of Bologna managed to pacify the region bringing together the wandering peoples and refounding and Christianized Indians. In one of those towns, San Juan Bautista of Mezquititlán, donated an image of the Immaculate Conception he had acquired in Patzcuaro.

In 1572 he founded the parish of tecuexes with head in Jalostotitlán; Including San Gaspar, San Juan, Mezquitic, San Miguel, Valle de Guadalupe, Canadas and Pegueros; all these towns were served by priests from Jalostotitlán.

How to reach the Cathedral Basilica

Mexicaltzingo Tram Stop in Guadalajara, Jalisco, Mexico is the nearby Tram Station to the Cathedral Basilica.