Basilica of the Divine Motherhood of Our Lady, Ulhatu, Ranchi, Jharkand, India 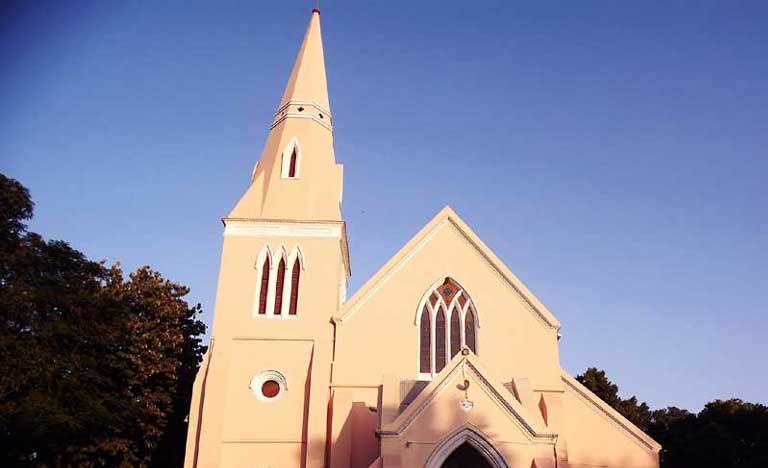 Home » Basilica of the Divine Motherhood of Our Lady, Ulhatu, Ranchi, Jharkand, India

Divine Motherhood of Our Lady, Ulhatu

Basilica of the Divine Motherhood of Our Lady, Ulhatu, Ranchi, Jharkhand, situated 17 kms from the state capital of Ranchi, is the first Marian Shrine in the Chotanagpur region.

Divine Motherhood of Our Lady, Ulhatu church has village chapels attached to it in Banpur, Barhibera, Jaratoli, Kawali, Kudagarha, Plandu, Serengtoli, and Sogod. There are several convents that are run by this church including St Anne’s Convent, Sisters of the Immaculate Heart of Mary, and educational institutions including St Joseph’s High School, RC Middle School and Primary Schools, Convent School and St Anne’s KG School and St Anne’s Grihini School. There is also a St Anne’s Dispensary that functions at Raja Ulhatu, Ranchi serving the less privileged members of the society.

In the Roman Catholic tradition, unlike in other Christian groups, Mother Mary is revered significantly, with more titles, feasts and venerations. Marian writers over the years and saints and masses of believers have contributed to the growth of Divine Motherhood of Our Lady, Ulhatu and Roman Catholic Mariology.

Around 200 people, including priests and nuns, on January 14 attended the first organised but restricted pilgrimage to the only basilica in Jharkhand, eastern India. The pilgrimage to the Basilica of the Divine Motherhood of Our Lady in Ulhatu was jointed organized by the priests of Ranchi archdiocese and the local unit of the Conference of Religious India (CRI).

“For this time, we restricted the participants’ number as this is a new activity of the CRI. But going by the participants’ enthusiasm and meaningfulness of the exercise itself, we will plan on a bigger scale next time,” said Salesian Father S. Charles Xavier, CRI local president.

History of Divine Motherhood of Our Lady, Ulhatu

Officially called the Basilica of the Divine Motherhood of Our Lady, Ulhatu it has its roots in the missionary work of Fr Constant Lievens. Fr Lievens, was a Jesuit from Belgium who was sent to the Chotanagpur region in 1885. Chotanagpur is a largely tribal area that comprises the present day Indian states of Chhattisgarh and Jharkhand. Fr Lievens chose Torpa, a village about 60 kms from Ranchi, as his base and made a small hut his home. It was from here that Fr Lievens was able to study the language and customs of the Munda people, who are the predominant ethnic group.

Fr Lievens, who is regarded as the Apostle of Chotanagpur, was dismayed to discover the appalling social conditions prevalent. The indigenous tribes were subject to the worst kind of exploitation in the form of acute indebtedness, the resultant forced labour and systematic land spoliation. Unless the Mundas were granted their basic rights and human dignity, spreading the word of Christ and of the Gospels would serve little purpose. It was with this understanding that Fr Lievens, started learning the intricacies of the unwritten tribal customary law.

Armed with this knowledge, Fr Lievens started taking up their cases in the local courts. By the strength of his reasoned arguments, Fr Lievens was able to convince the English magistrates of the justness of his cause. Repeated successes in his efforts, won Fr Lievens the hearts of the Munda people, who saw in him a Saviour, following which they started accepting Christ as their master. The number of tribals who voluntarily asked for and received baptism was astounding.

During his missionary work which lasted less than seven years, Fr Lievens who began with 56 Catholics was able to leave behind over 80,000 baptised Catholics when he died in 1893.He was sent back to Belgium to recuperate from the tuberculosis that had afflicted him. His ashes were brought back to India in 1993, a hundred years after his death and are interred at the St Mary’s Cathedral in Ranchi.

What is the Divine Motherhood of Our Lady, Ulhatu, Jharkhand today, started out as a small church in the remote village of Kawali. It was succeeded by a small chapel in 1907. The chapel was shifted in 1948 to Bhuthataur. A primary school functioned from here also and a priest attended the mass in this church. This was a time when Ulhatu still formed a part of the Ranchi Cathedral parish.

In 1952 when Fr Defrijn laid the foundation of the church and school building, living in a hut. By the year 1953, the church was formally established at Ulhatu, which at that time still was a part of the Ranchi Cathedral. The shrine is adorned by the statue of Our Lady of Halle with the child Jesus.

There are several stories that are attached to the Mary in this parish. According to legend, when enemies attacked the city of Ranchi the locals sought her help. The statue of Our Lady received all the cannonballs of the enemies, becoming blackened but saving the city. This parish happens to be within the Horal Jungle Field Firing Range.

Another story which talks of a student, Constant Lievens, who went on a pilgrimage to Mary in Halle and got a confirmation of his vocation to the Ranchi Missionary. When Lievens visited Kawali village in the year 1889, he saved the lives of people there, resulting in a movement towards the church. The story goes that Lievens was sick in Belgium and he yearned to return to the church in honor of Our Lady. Lievens died but his remains were sent to Ranchi in 1993, just a hundred years after this death. His plan was implemented at Ulhatu where the shrine was blessed in 1995.

Divine Motherhood of Our Lady, Ulhatu Church has village chapels attached to it in Banpur, Barhibera, Jaratoli, Kawali, Kudagarha, Plandu, Serengtoli, and Sogod. Several convents are run by this church, including St Anne’s Convent, Sisters of the Immaculate Heart of Mary, and educational institutions including St Joseph’s High School, RC Middle School and Primary Schools, Convent School and St Anne’s KG School and St Anne’s Grihini School. There is also a St Anne’s Dispensary that functions at Raja Ulhatu, Ranchi serving the less-privileged members of society.

The pilgrims converged at half a kilometre from the basilica, some 20 km east of Ranchi, capital of Jharkhand state. They then marched in prayerful procession to the shrine, which was declared a minor basilica as recently as on December 8, 2016. Most pilgrims made their confession before the Mass that Cardinal Telesphore Placidus Toppo, archbishop of Ranchi led. The prelate urged the gathering to draw maximum benefit from the Marian shrine.

In his homily, the 77-year-old Asia’s first tribal cardinal noted that the main reason for opening the basilica was to seek forgiveness and obtain God’s grace through Blessed Virgin Mary’s intercession.

According to him, the basilica is the sign of God’s “immense” kindness toward the people of Jharkhand, especially the Adivasi (indigenous people) of Chotanagpur. “As we know, the Catholic Church here predominantly consists of Adivasis, who were oppressed and exploited by landlords and zamindars. In addition, the Adivasi psyche has been greatly troubled by what they call the evil spirits,” the prelate explained.

The early missionaries led by Servant of God Jesuit Father Constant Lievens decided to address both these aspects consistently and emphatically. “The success they obtained in this regard forms part of what is known as the “Miracle of Chotanagpur,” Cardinal Toppo said.

The cardinal also recalled the service of late Jesuit Father Francis Mathijis who advised and collaborated with the prelate in “the lengthy and meticulous process for obtaining the Holy See’s approval” for the basilica, “an all-time means of sanctification and reconciliation.”

The cardinal commended the CRI and his priests for their initiative to launch the pilgrimage and urged the participants to encourage their respective community members to undertake similar pilgrimages. “Our people need to derive maximum benefit from the pilgrimage center. Hence the priests and religious should educated and encourage them,” the cardinal said.

Auxiliary Bishop Telesphore Bilung, who directed the pilgrimage, said that the “meaningful activity” will spiritually renew the Catholic community in the state. Fr. Maximus Toppo, parish priest and curate of the shrine, says he expects the flow of pilgrims to increase after the event. Construction of more facilities for the pilgrims are underway.

Cardinal Toppo blessed the minor basilica on the feast of Immaculate Conception of the Blessed Virgin. In recognition of its enormous spiritual fecundity, the Shrine was accorded the title of Minor Basilica through a Decree of the Congregation for Divine Worship and Discipline of the Sacraments issued on 30 November 2004.

India now has a total of 23 basilicas – 18 Latin, four Syro-Malabar and one Syro-Malankara.

Basilica of the Divine Motherhood of Our Lady, Ulhatu, Ranchi, Jharkhand is well connected with Bus Station, Railway Station and Airport facilities rest of the country.

Birsa Munda Airport, Ranchi which is (19.1 Kms) from Basilica of the Divine Motherhood of Our Lady, Ulhatu, Ranchi.

The nearest railway station is Ranchi Junction which is (13.5 Kms) from Basilica of the Divine Motherhood of Our Lady, Ulhatu, Ranchi.

The nearest is Ranchi, Bus Station which is (16.3 Kms) from Basilica of the Divine Motherhood of Our Lady, Ulhatu, Ranchi.