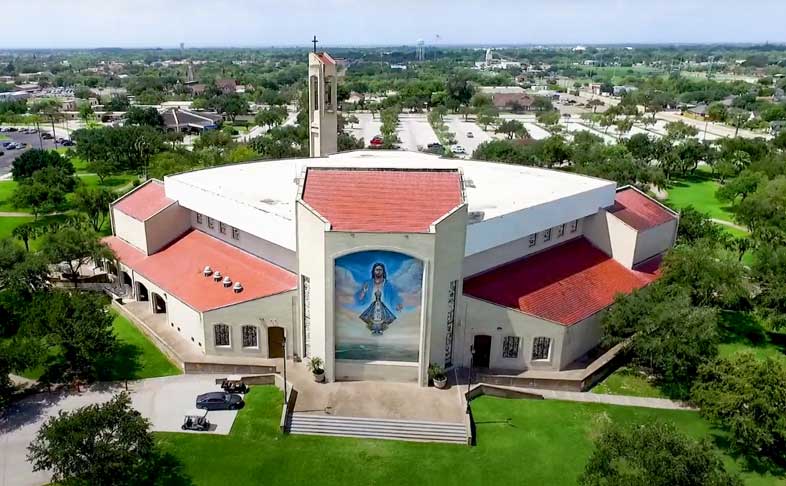 Our Lady of San Juan del Valle, Texas, US

The Basilica of the National Shrine of Our Lady of San Juan del Valle is a Minor Basilica of the Catholic Church located in San Juan, Texas, United States. It is also a National shrine under the direction of the Diocese of Brownsville.

This shrine in South Texas is one of the state’s most popular pilgrimage spots, welcoming over one million visitors each year. Devotion to Our Lady of San Juan del Valle Texas stems from a miraculous event at the Basilica of  San Juan de los Lagos, Mexico, located near Guadalajara.

Spanish missionaries had placed a small image of the Immaculate Conception in the church of San Juan de los Lagos upon their arrival here in the 16th Century. In 1623, during the rehearsal for an acrobatic performance, the child of the acrobat, who was part of the act, lost her balance and was killed.

The caretaker of the church convinced her parents to place the image of the Virgin Mary over their daughter’s body and then prayed for the intercession of the Blessed Virgin Mary. Suddenly the child came back to life.

An artist in Guadalajara, Mexico was commissioned to make a reproduction of the statue venerated at San Juan de Los Lagos, and this reproduction was first placed in the San Juan chapel while the Basilica was being built.

The Shrine is staffed by the Oblates of Mary Immaculate and is located in San Juan, Hidalgo County, in the lower Rio Grande valley. The present edifice is the third in the history of the shrine. The first was a small wooden chapel built in 1920 by Rev. Alfonso Jalbert on the corner of Nebraska and Second Street in San Juan; at the time, it was a mission of St. Margaret Mary Church in Pharr. The first director, Father Joseph Azpiazu, realized that the shrines of Mexico, Our Lady of Guadalupe in Mexico City and San Juan de Los Lagos in Jalisco, were both too far from Texas for Hispanics, particularly of South Texas and the Valley, to use them. 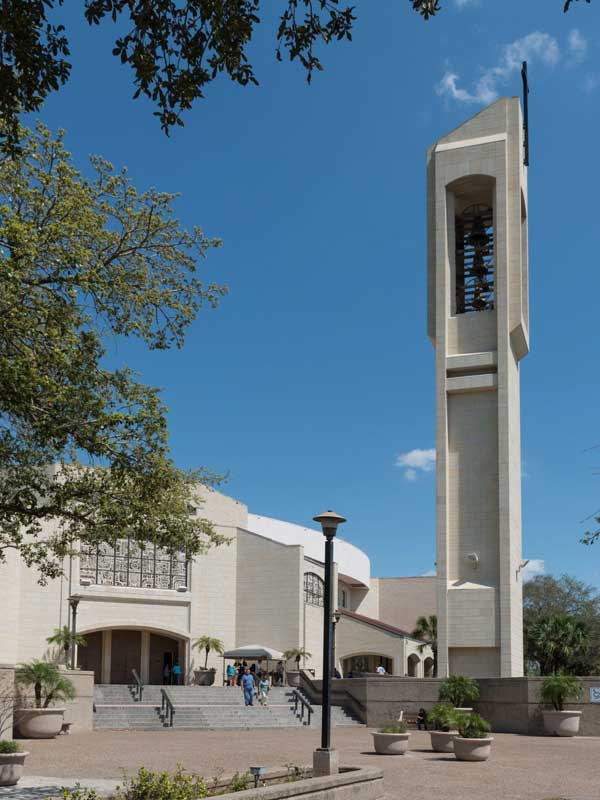 In 1949 Azpiazu brought to his parish of St. John the Baptist a replica of the image of Our Lady of San Juan del Valle Texas, venerated in Jalisco at San Juan de Los Lagos. The image is a statue about three feet high, clothed in traditional robes. Father Azpiazu hoped to foster a devotion to Our Lady of San Juan which would benefit his people and help draw the community together. Soon the church became a place of pilgrimage for many Mexican Americans in Texas; on weekends hundreds of pilgrims would come to San Juan to pray.

The crowds grew, and in 1954 the construction of a larger shrine was completed and dedicated by Father Azpiazu. With a seating capacity of 800, it was large enough for the ordinary Sunday congregation served by many Masses throughout the day, but small enough so as to not overwhelm the humble migrants who came to pray. As weekly attendance jumped from thousands to tens of thousands, the shrine was lavishly ornamented with oil paintings, wood carvings, stained-glass windows, and statues. The shrine’s services for the pilgrims were also expanded to include a Pilgrim House, cafeteria, retreat house, grade school, nursing home, and radio programs. A convent and rectory were also built.

History of Our Lady of San Juan del Valle 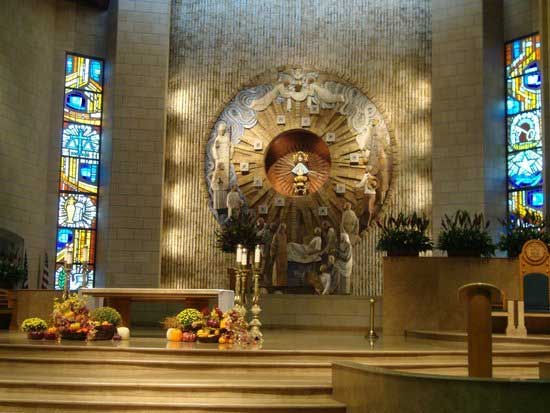 For centuries Christians have made pilgrimages with a spiritual purpose to holy places. Here in the Rio Grande Valley, hundreds are drawn to the Shrine dedicated to Our Lady of San Juan del Valle Texas and the number of pilgrims continues to grow. Averaging more than one million visitors a year (20,000 a weekend), it is one of the most visited shrines in the United States.

The history of this Marian Shrine begins in 1920, when the Reverend Alfonso Jalbert, O.M.I., built a small wooden chapel in San Juan, Texas as a mission church of St. Margaret Mary Church in Pharr, Texas.

In 1623, an acrobat traveling with his wife and children stopped in San Juan de los Lagos to give a performance.  While practicing their act, the youngest daughter lost her balance and was killed. An Indian woman, who was the caretaker of the church, begged the parents to place the image of the Virgin Mary over their daughter’s body and prayed for the Virgin’s intercession. The child was then brought back to life. As word spread of the miracle, the devotion to Our Lady, under the title of “La Virgen de San Juan”, started to grow throughout Jalisco. Today, she is recognized by many people throughout Mexico as well as the United States.

In 1949, Rev. Jose Maria Azpiazu, O.M.I., became pastor of the parish of St. John the Baptist in San Juan, Texas.  He was convinced that fostering a devotion to Our Lady of San Juan would benefit the people and help draw the community together. After receiving permission from the bishop to foster the devotion, he commissioned an artist in Guadalajara, Mexico to make a reproduction of the statue venerated at San Juan de Los Lagos and this reproduction was first placed in the San Juan chapel.

Bishop Mariano S. Garriaga approved the construction of a new church and the Shrine was built five years later in 1954, and dedicated to the Virgen de San Juan. At the time San Juan was a part of the Diocese of Corpus Christi.  Sixteen years after its construction, a tragic event on October 23, 1970 destroyed the entire Shrine. While 50 priests were concelebrating Mass with another 50 people in attendance, and 100 school children in an adjacent cafeteria, the pilot of a small low-flying airplane crashed into the roof of the shrine and exploded into flames.

While the overall loss was estimated at $1.5 million, many claim it was a miracle that no one was hurt or died in the tragedy. The pilot of the plane, Francis B. Alexander, was the only fatality. Our Lady of San Juan was protecting her children at that moment. Also, Father Patricio Dominguez, O.M.I., a missionary priest, along with the help of Pedro Rodriguez, a sacristan, rescued the statue of Our Lady of San Juan del Valle, and Ron Anderson, then a Diocesan Priest, saved the Blessed Sacrament before the altar was engulfed in flames.

After the Shrine was destroyed, the Shrine’s dining room temporarily housed the statue of Our Lady of San Juan.

In 1972, Bishop John J. Fitzpatrick separated the administration of the Shrine from the parish. He made plans to build a parish church on the site of the destroyed Shrine and build a bigger church to serve as the Shrine on the grounds north of the former Shrine. The ground breaking for the new Shrine took place on November 27, 1976. The new Shrine was dedicated on April 19, 1980. Cardinal Medeiros joined Bishop Fitzpatrick at the dedication along with an estimated 50,000 people.

The National Conference of Catholic Bishops designated Our Lady of San Juan del Valle Texas a national Shrine on March 24, 1998, and the following year on June 12, 1999 Pope John Paul II designated it as a minor Basilica. 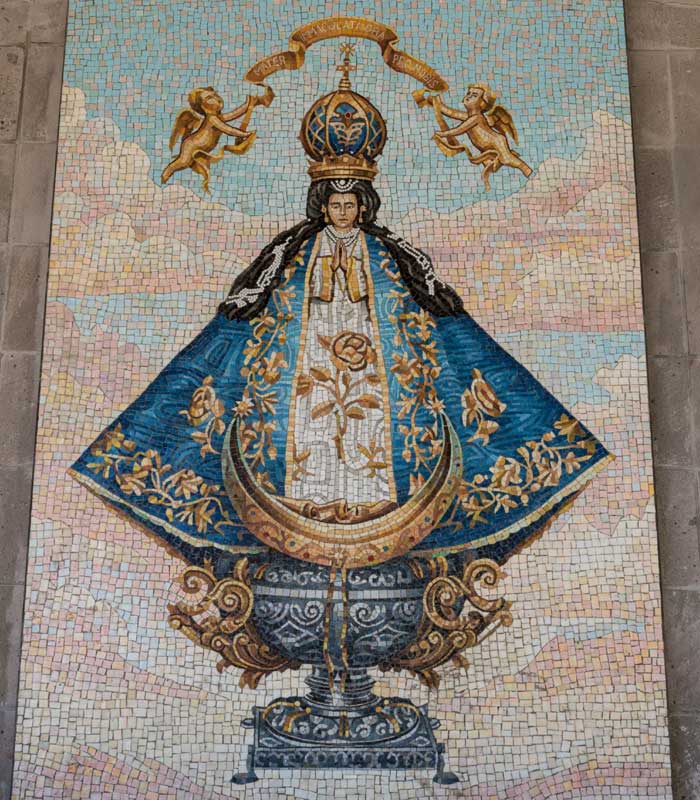 The new Shrine opened in 1980 and while it’s beautiful year-round, Christmas truly brings the holiday season to life.  And yes, this church is a gift shop if you need something for that special someone. The biggest seller here is candles because here lighting a candle is a prayer and to pray is what people come here for. “We usually get 10,000 candles a week,” stated Father Jorge. “The faith of the people evangelizes me. I’m here as a priest, no? I’m supposed to be the one evangelizing the people, but no, when I see the devotion and the fate of the people, their fate evangelizes me. And when I see them praying on their knees with a candle on their hand, I always say that candle has something special. You know, because it is a prayer, it is a Thanksgiving, it is a petition, it is a family praying there. It’s a lot of meaning,” said Father Jorge.

“We have candles to St. Jude, Our lady Guadalupe, Our Lady of San Juan, St. Joseph is very popular. People go and buy the candles with the saying they want and then they bring them here. Holy week or Christmas, we get more candles than the one we can put in the candle room,” stated Father Jorge.

The gentle flicker of each flame is a radiant reminder of why religion brings us together.  In the end, we all want the same, for friends and loved ones to live healthy happy lives, to end suffering and sadness, for goodness to triumph over evil and for the light from above to shine down on this Earth. Our Lady of San Juan del Valle Texas – “I think that’s the beauty of this place. People leave and they go back home different than the way they came, because there is hope. And our hope is not in ourselves, not in human knowledge or human science. It’s too little. Our hope is in Christ and in the resurrection of Christ. Every Catholic or non-Catholic should come to the Basilica to experience God’s love and mercy. It’s not the only place they can experience it, but it is a special place,” expressed Father Gomez. 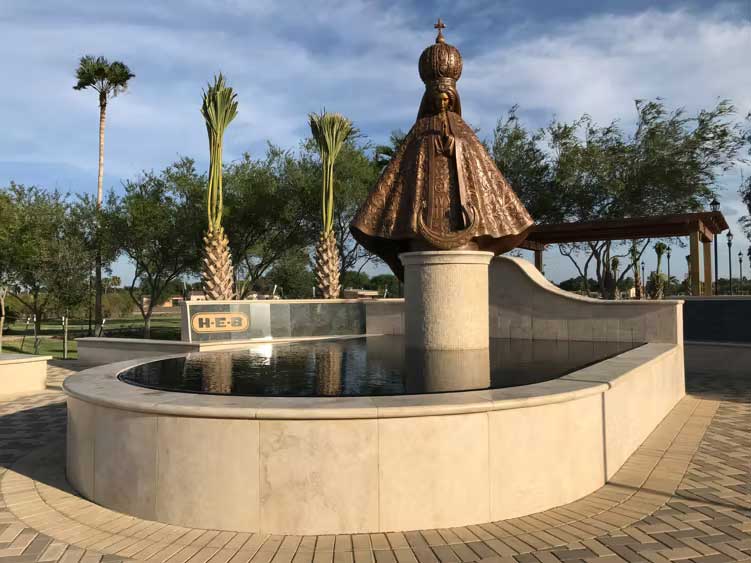 McAllen International Airport, Texas is the nearby airport to the Basilica.

Rio Valley Switching, Union Pacific Intermodal are the nearby train stations to the Basilica.