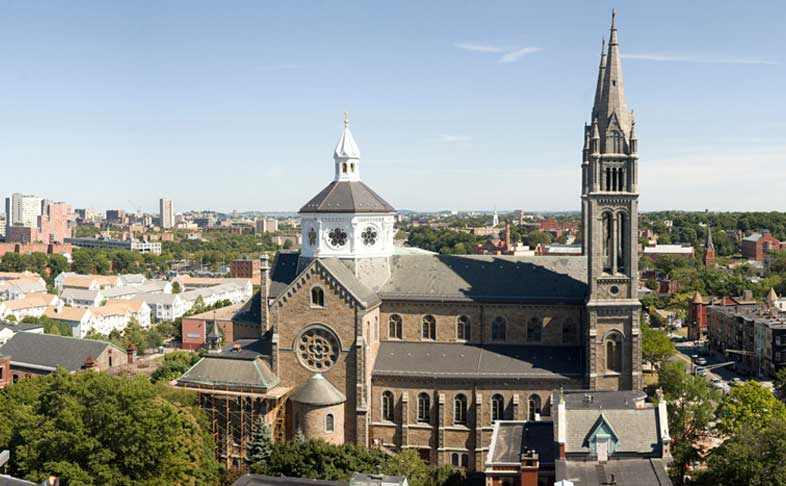 Our Lady of Perpetual Help, Boston

The Basilica and Shrine of Our Lady of Perpetual Help is a Roman Catholic basilica in the Mission Hill neighborhood of Boston, Massachusetts, sometimes known as “The Mission Church”. The Redemptorists of the Baltimore Province have ministered to the parish since the church was first opened in 1870.

The towering edifice of the Boston Basilica is an emblem of the ascendance of religious freedom in Boston.  The rich history of the parish extends over 140 years, founded upon the aspirations of early German and Irish immigrants. Since 1869, the religious order of the Redemptorists have maintained stewardship of this sacred place.

In May 1869, Rev. James A. Healy, pastor of St. James’s Church in Boston, invited the Redemptorist Fathers to give a parish mission. Pleased with the success of the mission, Father Healy recommended to the Bishop that the religious order should establish a mission-house in Boston. That year Archbishop John J. Williams invited the Redemptorists to Boston. In September 1869 the Redemptorists acquired a site in Roxbury, then known as the Boston Highlands, on Parker Hill. Parker Hill was named for wealthy Boston merchant, John Parker, who occupied the summit of the hill during the eighteenth century. The five acre estate was known as Brinley Place, and included a grand house, Datchet House built in 1723 by prominent English officer Colonel Francis Brinley in memory of his ancestral home. Colonel Brinley died in 1765. Wealthy merchant Robert Pierpont purchased the house in 1773. Pierpont enlarged and enriched the house to such a degree that it became known as “Pierpont’s Castle”.

The Redemptorists built a modest wooden church on the location in 1870. This was to serve as a “mission house”, a home base for priests traveling to distant parts of Massachusetts, Canada, and elsewhere. The church was dedicated to Our Lady of Perpetual Help. The first mass was said on January 29, 1871. The original structure was located on the site where the rectory now stands.

History of Our Lady of Perpetual Help, Boston 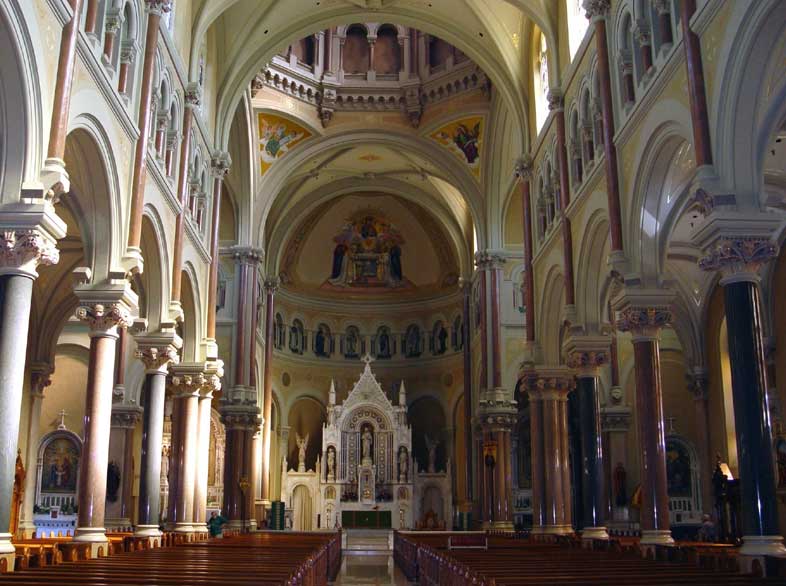 St. Alphonsus Liguori founded the Congregation of the Most Holy Redeemer (Redemptorists) in Naples, Italy in 1732. The original mission as set forth by St. Alphonsus was to strive to follow the example of Jesus Christ in preaching the Gospel to the poor, particularly to those who live on the margins of society.

St. Alphonsus was a brilliant, articulate, pragmatic preacher. He knew how to reach ordinary people who had limited education and very real needs. They followed this gifted preacher from church to church and town to town to hear him preach the message of hope in Christ for all people. This message called many men to the priesthood and to the congregation to continue the work Alphonsus started. By the early 1800’s Redemptorist communities were established in the Austro-Hungarian Empire, Germany, Belgium and Holland. In 1832, the centennial year of the foundation of the Congregation, six Redemptorist missionaries (three priests and three brothers) traveled to the United States of America to establish the first mission outside of Europe.

Within the mission of the religious order, a strong Marian connection is always present. St. Alphonsus wrote many beautiful songs, litanies, and painted images of Mary. In 1866, Pope Pius IX entrusted the icon of Our Lady of Perpetual Help to the Redemptorists with the order to “make her known”. In fulfilling this mission, the order has faithfully promoted devotion to Mary through novenas, preaching, and venerating her image across the world. The icon is one of the most recognized Marian images.

An account of the sick flocking to the shrine was published in the New York Herald in March 1901, under the headline “A Lourdes in the Land of Puritans”. Accounts of activities at the shrine were also covered by the Boston American General News of March 28, 1909 under the caption “Heaps of Crutches Left at Altar by Afflicted”, and by the Boston Globe of December 10, 1910, and again in a Globe article of August 3, 1919. During World War I, the Roxbury shrine became popular with family members praying for the safe return of soldiers. Between 1878 and 1884 over 300 cures were documented.

Mission Grammar School was completed in 1889, located behind the church on Smith Street. With 24 classrooms to accommodate 1,200 pupils, the School Sisters of Notre Dame arrived from Baltimore to begin the new endeavor of educating the parish’s boys and girls. Under the direction of the Xaverian Brothers, Mission Church High School opened in 1926. After 66 years of service Mission Church High School was closed due to declining enrollment at the end of the school year in 1992. The building was sold to the Boston Public School system and continues to be operated today as New Mission High. The grammar school is currently located on St. Alphonsus Street and continues to educate children in K-8. 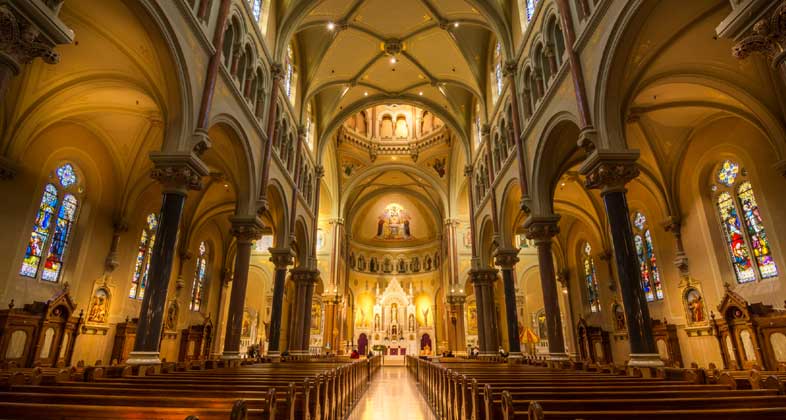 In 1900, St. Alphonsus Hall was opened as an early form of community center to serve a large immigrant population, most notably from Ireland. It housed a library, meeting hall, gym, bowling alley and theater. The Passion Play “Pilates Daughter” written by Rev. Francis Kenzel, C.Ss.R. was performed for the first time in St. Alphonsus Hall in 1902. With an all female cast, the fictitious drama centers around the daughter of Pilate, Claudia, who threw a rose at Christ as he passed by carrying his cross. The flower touches Jesus and has miraculous powers that impact the lives of many. As a central attraction during Lent, parishioners acted out the play every year for over 50 years until performances ended in the late 1960s.

In 1903, the old Brinley Mansion was replaced by a new priests’ residence. The rectory includes references to then Irish heritage of the neighborhood. The small chapel for resident Redemptorists has stained glass windows decorated with green shamrocks. The rectory also served as a house of formation for Redemptorist seminarians studying at Boston College and St. John’s Seminary in Brighton until August 2017.

The basilica is located on Tremont Street, almost at the center of Mission Hill, a 0.75-square-mile (1.9 km2) Boston neighborhood of approximately 18,000 people. The church is considered the symbol of the neighborhood, to which it gives its name. It continues to serve descendants of Irish immigrant families who still remain in the neighborhood, in addition to newly arrived immigrants from Ethiopia, Nigeria, and Haiti.

Senator Edward Kennedy’s funeral took place there on August 29, 2009. He had often prayed at the church due to its proximity to the hospitals in the Longwood Medical Area of Boston, where he had visited sick and injured members of his family. 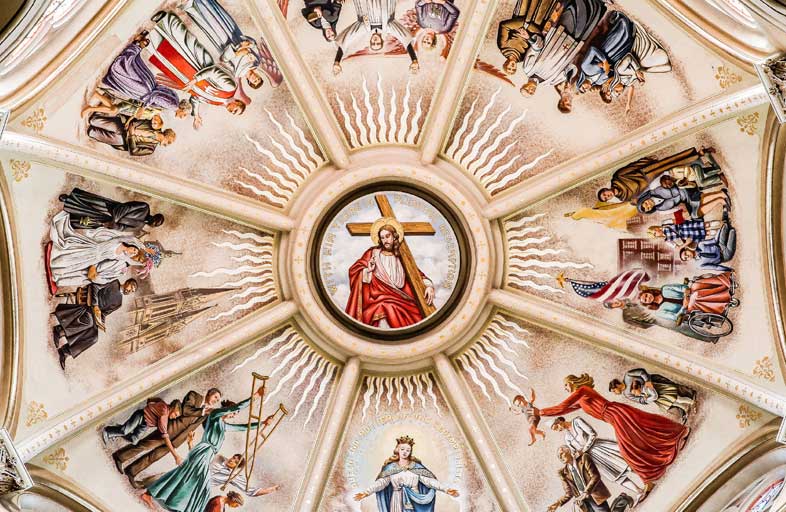 The current church was designed by William Schickel and Isaac Ditmars of New York. The then German congregation broke ground in 1874. The Mission Church was constructed in Romanesque style, of Roxbury puddingstone, quarried from what is now Puddingstone Park, just down the block. An octagonal, cupola-topped lantern rises over a hundred feet above the crossing. The stained glass windows in the nave were made by F.X. Zettler, and the windows in the shrine were made by Franz Mayer and Co. from Munich, Germany. Side altars were dedicated to the Holy Family and St. Patrick, respectively. The church was dedicated in 1878. At this time the church was not an ordinary parish in which all sacraments were administered, but was instead limited to penance and Holy Communion. Our Lady of Perpetual Help became a parish of the Archdiocese of Boston in 1883.

The Hutchings organ was installed in 1897. It was one of the first organs in the country to successfully use electric action, which Hutchings invented and patented. The organ has 62 stops, and close to 3,200 pipes.

The spires, added in 1910, were designed by Swiss architect Franz Joseph Untersee, who also designed the rectory. Due to the church’s sloping foundation, the west cross tops its tower at 215 feet (66 m); the other spire is two feet shorter. The western tower houses twelve bells. The length of the church is also 215 feet (66 m), presenting a perfect proportion. The church was elevated to basilica status in 1954 by Pope Pius XII. The church complex was designated as a Boston Landmark by the Boston Landmarks Commission in 2004.

There are seven Catholic sacraments: Baptism, Reconciliation, Eucharist, Confirmation, Marriage, Holy Orders, and Anointing of the Sick. The seven sacraments are ceremonies that point to what is sacred, significant and important for Christians. They are special occasions for experiencing God’s saving presence.

The Icon of Our Lady of Perpetual Help 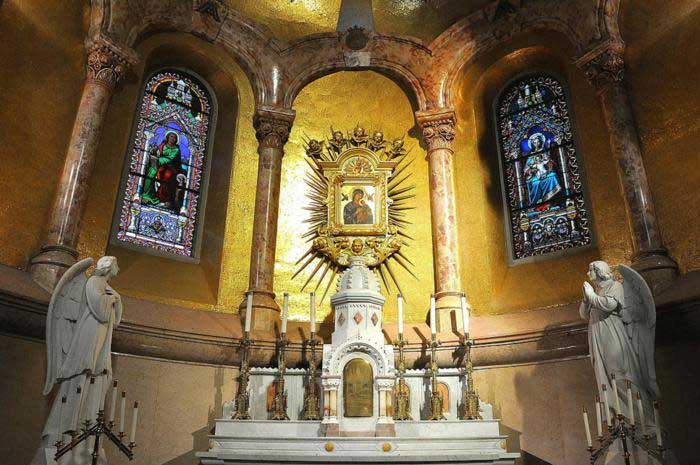 Since 1865, the Redemptorists have spread devotion to Our Lady under the icon and title of Mother of Perpetual Help. According to tradition, the ancient Byzantine icon was stolen from a church in Crete where many miracles had occurred.

The image remained in the private possession of a Roman merchant and his family until 1499 when it was publicly displayed in the Church of St. Matthew in Rome between the Basilicas of St. Mary Major and St. John Lateran.

When St. Matthew’s was destroyed in 1789, the icon was rescued and hung in an obscure monastery chapel. In Rome, the Redemptorists were building their new headquarters on the former site of St. Matthew’s. After learning of this connection, the order sought to restore the placement of the icon upon its original veneration site.

The Redemptorists asked Pope Pius IX for permission to move the icon to their new church, San Alfonso. The pope granted his permission, and told the Redemptorists to “make her known throughout the world.” The original icon is still venerated today in the church of St. Alphonsus.

Rev. Joseph Manton, C.Ss.R. became well known across New England as the “Novena priest”. For 59 years, he led the weekly Novena services in honor of our Lady of Perpetual Help. His unique preaching style was appealing to all who came to the Basilica each week, listened on the radio, watched on TV, or read in one of Fr. Manton’s many books. The legacy of his vocation lives on today in the many who recall the Novena priest. 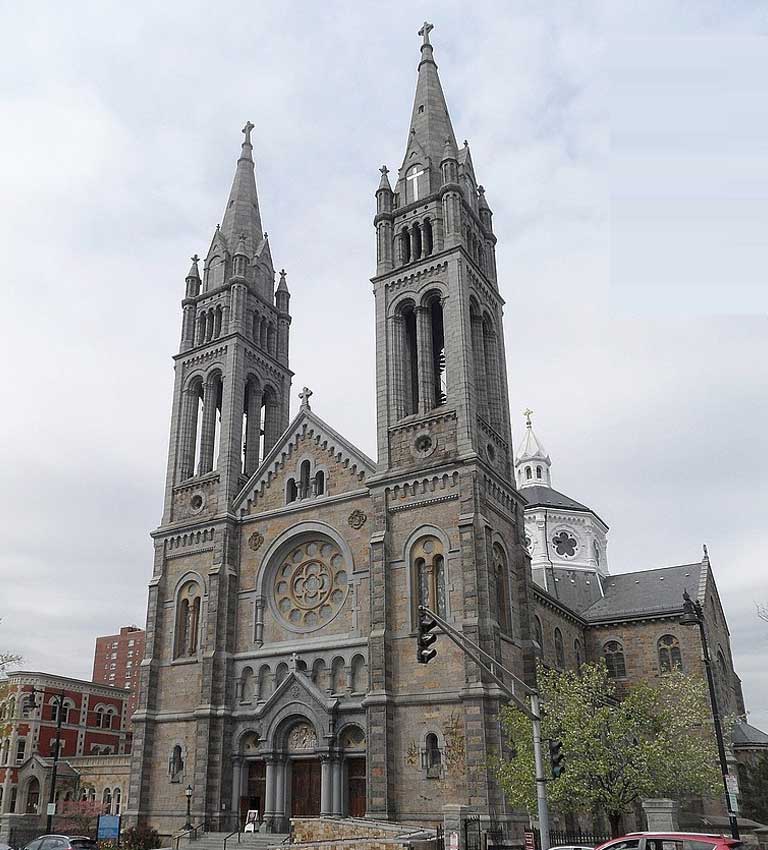 In the Eastern Orthodox Church iconography, the image is known as the “Virgin Theotokos of the Passion” due to the instruments of the Passion of Jesus Christ present on the image. Also known as Our Lady of Perpetual Succour (Annual Feast) is celebrated on June 27 by the universal Church.

Boston Airport (BOS) is the nearby airport to the Basilica.